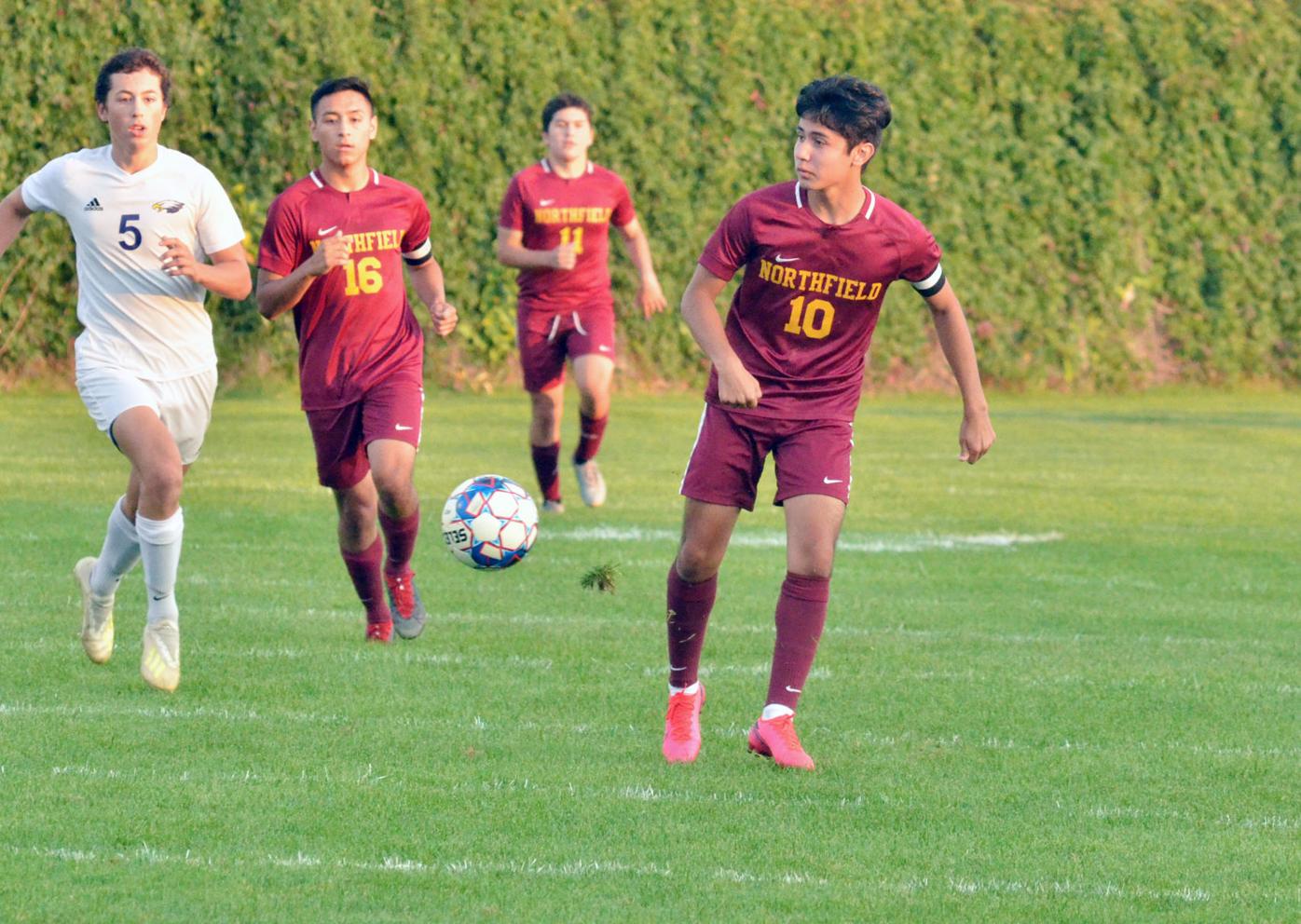 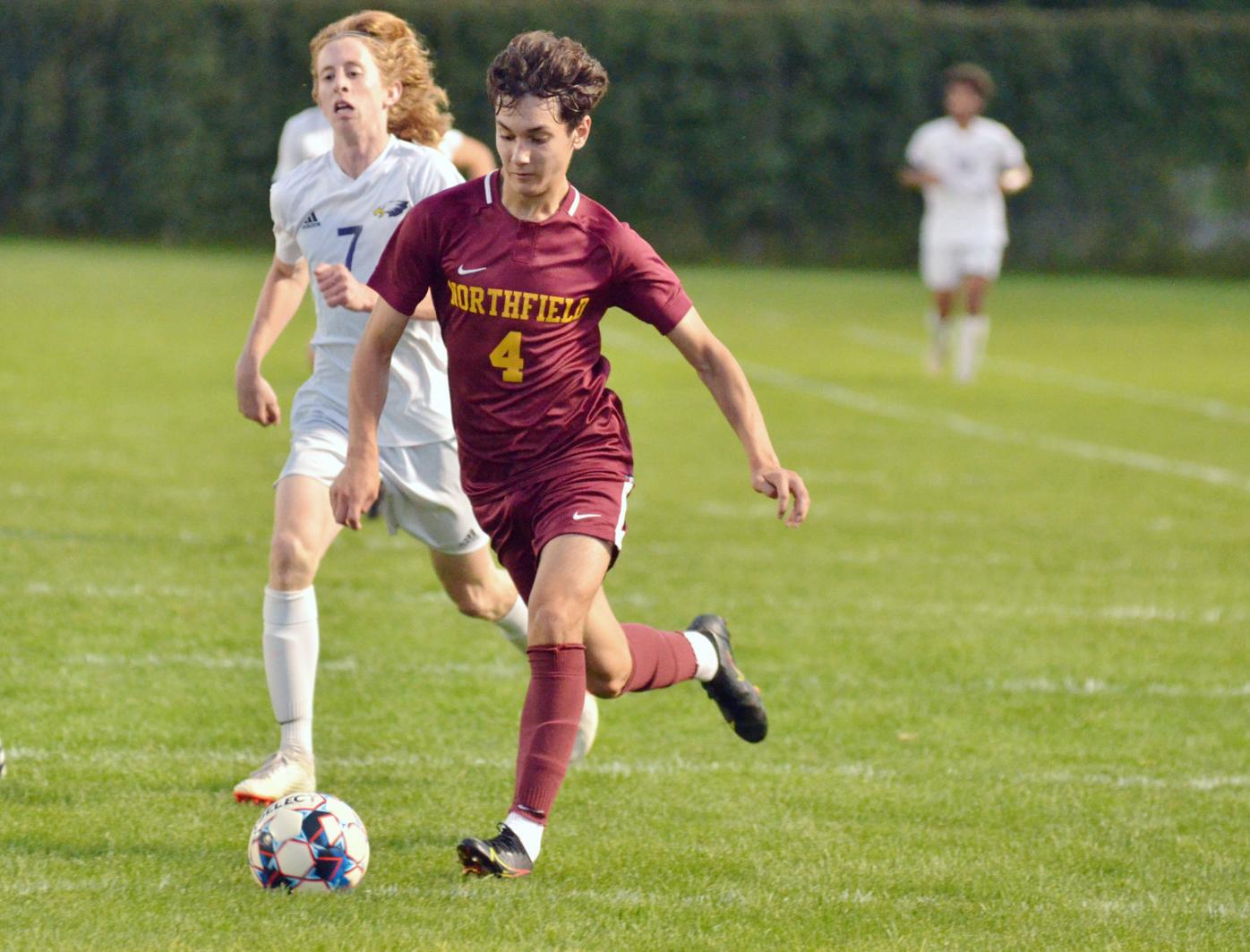 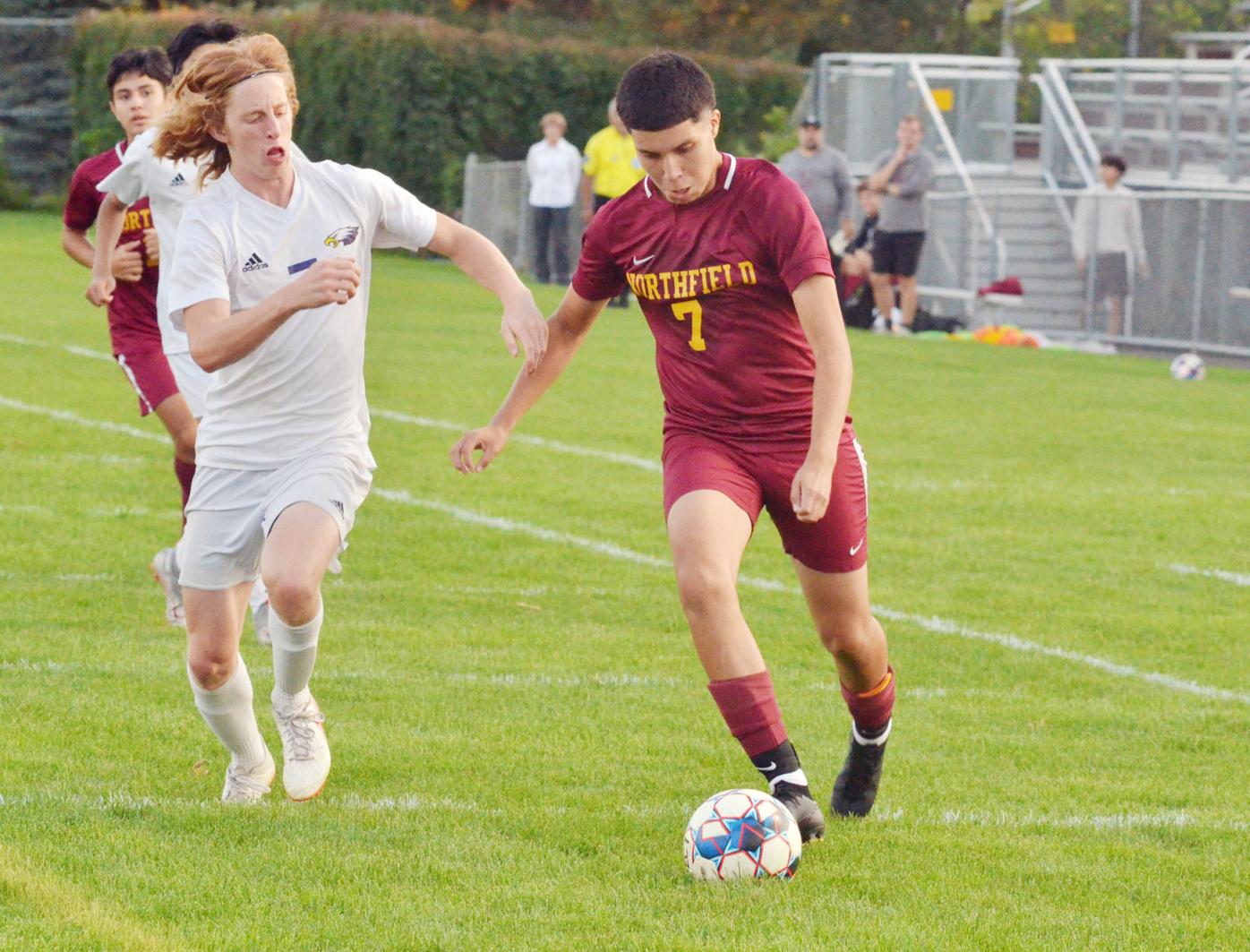 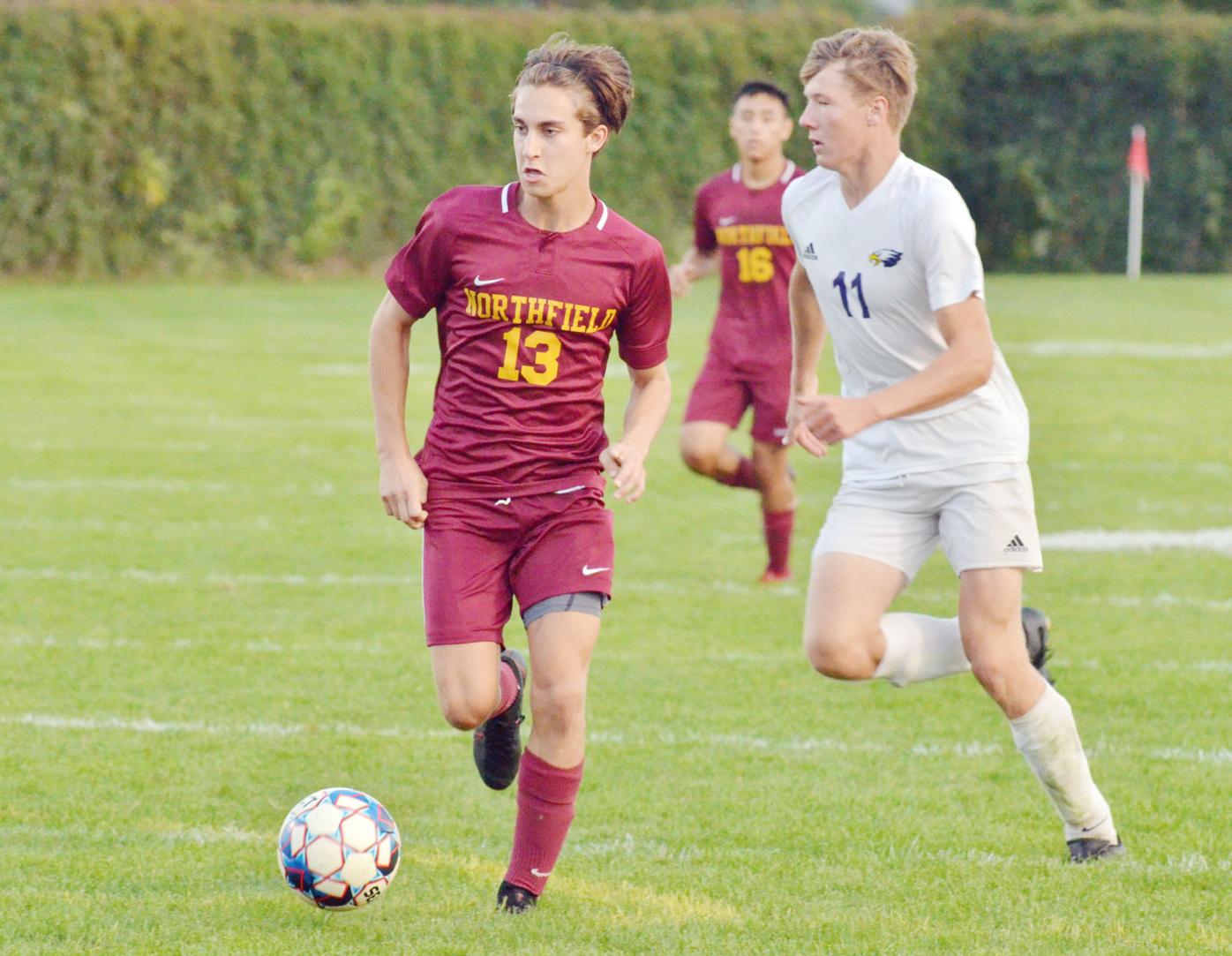 Northfield junior Leo Runestad sprints toward the goal during Thursday’s 7-0 victory against Red Wing at Northfield High School. Runestad scored once and caused an own goal. (Michael Hughes/southernminn.com) 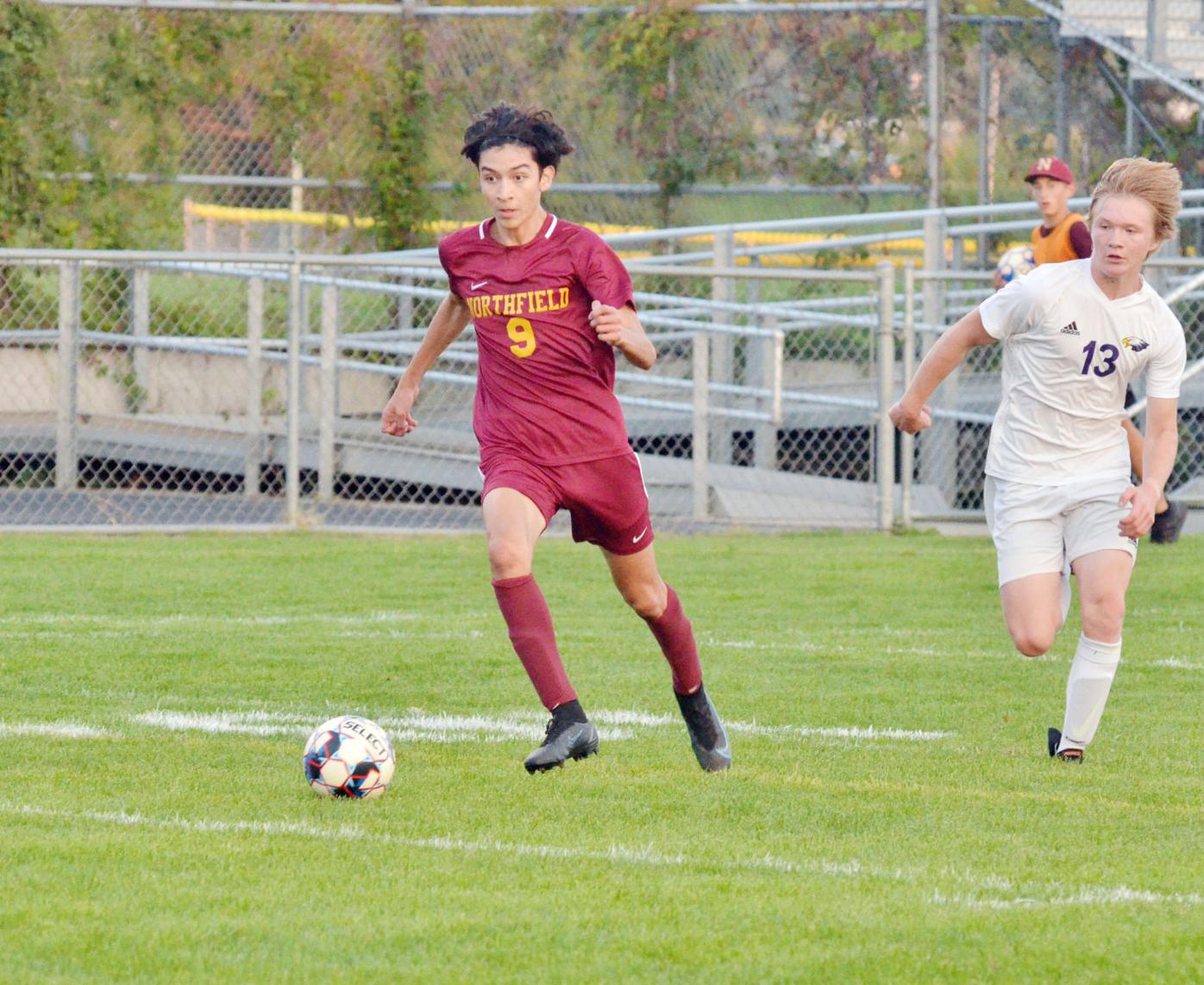 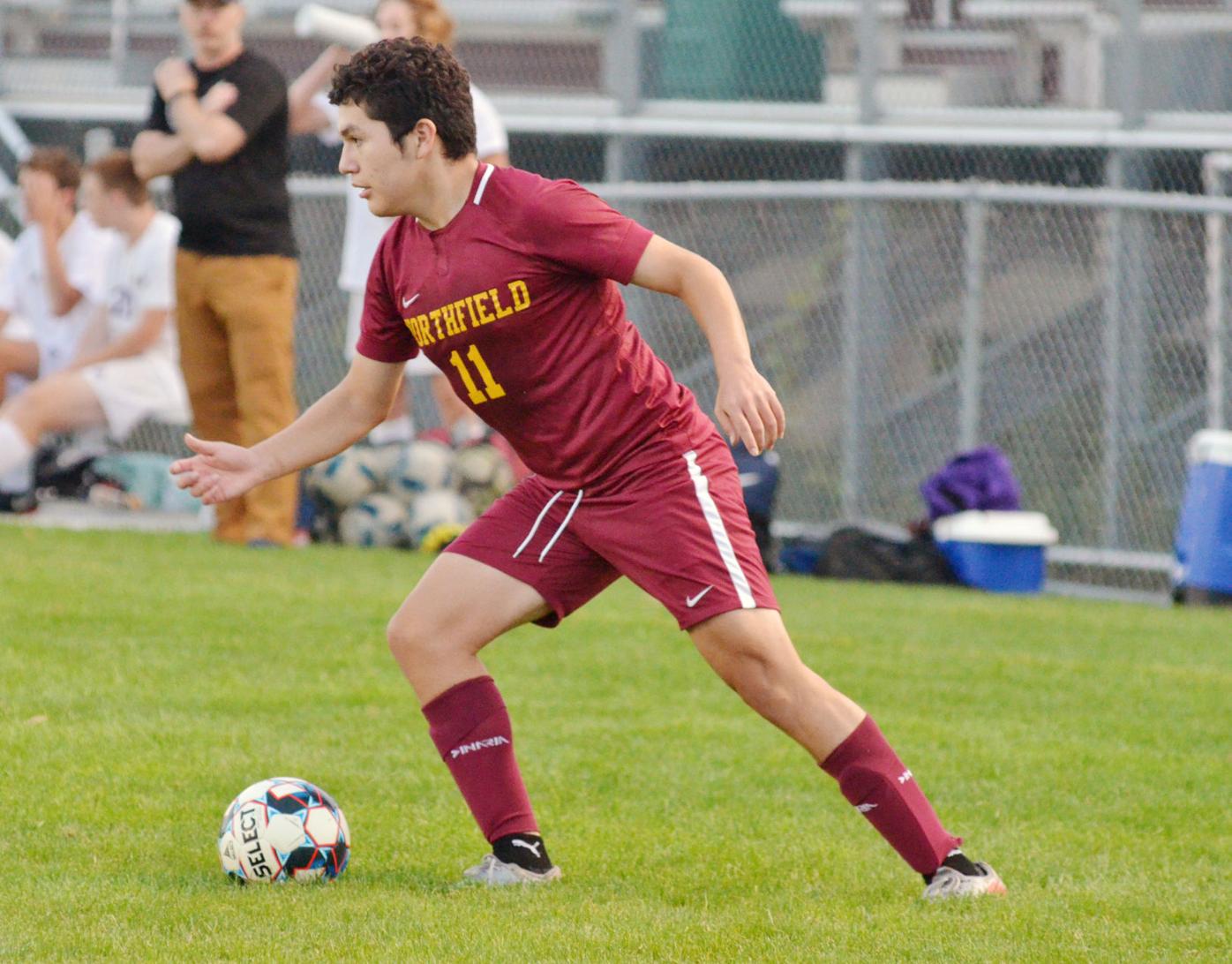 Northfield junior Leo Runestad sprints toward the goal during Thursday’s 7-0 victory against Red Wing at Northfield High School. Runestad scored once and caused an own goal. (Michael Hughes/southernminn.com)

After an 0-2 start in Big 9 Conference play and a sudden coaching change, the two captains for the Northfield boys soccer team — seniors Teigen Hoff and Isai Duque — presented an idea to Cale Steinhoff, who started the season as an assistant coach but is now the acting head coach.

The proposal from Hoff and Duque was to add another piece to the leadership pie for the Raiders and designate senior Pablo Gallardo as a third captain.

Wearing the captain’s armband Thursday night, Gallardo powered in four goals to push Northfield to a 7-0 victory at home against Red Wing.

“He’s worked so hard, he’s great in practice, he helped support captain’s practices in the summer and this is just another example of him doing what he needs to do to make the team as good as it can be,” Steinhoff said. “It’s a totally new role for him, and he’s adapted really well.”

Gallardo played primarily as an outside back last season to help the Raiders win a Section 1AA title. He provided additional attacking force down the wing, but Gallardo was essentially playing with a restrictor plate slapped on top of his offensive potential because of his defensive responsibilities.

After the graduation of almost all Northfield’s attacking depth from last year, Gallardo is suddenly able to operate in his highest gear.

After sophomore Emmanuel Ramirez started the scoring Thursday by nodding in a corner kick, Gallardo scored twice in the span of five minutes to push the Raiders in front 3-0 with just under 19 minutes remaining in the first half.

Thanks to a few saves at full-extension from the Red Wing goalie, Northfield was unable to expand its lead any further. Then, within the first six minutes of the second half, the Raiders relied on one of those returning attackers when junior Leo Runestad scored and banged in a cross off a Red Wing defender into the net to suddenly extend the advantage to 5-0.

“Anything can happen still,” Steinhoff said his message was at halftime. “If they score in the first 10 minutes — we just lost up two goals with 10 minutes left against Mankato West. The whole team pressed really well. We were all over them, and Leo was super dangerous and scored two goals in five minutes and the game’s over.”

From there, it was a case of Northfield continuing its aggressive defensive marking to not allow the Wingers any room to fly up the field. After the Raiders struggled to contain Mankato East in a 2-0 loss Tuesday, Steinhoff credited the work of junior Miguel Perez, senior Colin Thomas Green and senior Arturo Baez, who rotated Thursday between the two outside back positions.

That work made it one of the easiest shutouts sophomore goalie Zach Breiland will ever record.

“We cleaned up in the back and I don’t think Zach saw a shot,” Steinhoff said.

Of course, that back four was also helped by the pressing from the six players ahead of them. Northfield regularly pushed its press well in Red Wing territory to regain possession, which directly resulted in a few of the goals for the Raiders and prevented the Wingers from building up any type of possession.

“Our gameplan was basically if we keep the ball in their half of the field, then good things will happen for us and there’s no way good things can happen for them,” Steinhoff said.

“Our last game against Mankato East was really difficult because the energy level was low. We brought it right from the start today, and that was great. We addressed some of the problems from that Mankato East game where we marked kind of soft, and that was not an issue today at all.”