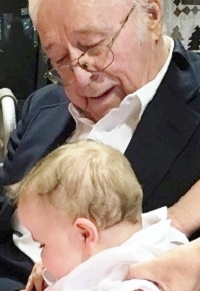 Robert G. Law 1931–2020 Northfield—Robert G. Law, age 89, of Northfield, passed away Wednesday, June 24, 2020, in Northfield. Robert was born the son of Herbert and Laura (Carpenter) Law on April 11, 1931, in Northfield. His family lived in homes on area farms and helped the owners with their farming operation. Bob then entered the Army National Guard and served during the Korean War. His service brought him to Greenland where he helped move the "Old Thule" Air Base to its current location. After his honorable discharge, Bob married Karen Otis and from this union, two sons were born. Robert and Christopher. The couple would later divorce and Bob then married Pearl Neil and they later divorced. While in Northfield, Bob began a long career at Sheldahl's. After his retirement, Bob began working at the American Legion in Northfield and later for the Northfield Ballroom where he did set-ups and was the beer tender for weddings and other events up until the age of 87. Bob loved working, never wanting to stop, and worked as long as possible. He had a unique sense of humor and enjoyed teasing and joking with family, friends, and those he served at the ballroom. He enjoyed gardening and his tulips. He had a special love of horses and was a founder of the Waterford Warriors Snowmobile Club. What made Bob the happiest was being a grandfather and great-grandfather. He is survived by his sons Robert (Lisa) of Norfolk, VA, Christopher (Lisa) of Northfield; three grandchildren Sierra Law (Dylan Miller), Kaylan and Joshua Kwaitkowski; great-grandchildren Leo, Tilly, and Milo Miller, Karmon and Aiden Kwaitkowski. He is also survived by two sisters Norma (Doug) Schwalbe of Chaska and Ruth Cornell of Superior, WI. He was preceded in death by his parents; his granddaughter Jessica Askelson; two brothers Wayne and Lyle, and a sister Mary Cooksey. Funeral services will be held at the Northfield Ballroom on Wednesday, July 1, 2020, beginning at 2:00 PM. Visitation will be one hour prior to the service in the ballroom. Burial will be at Oaklawn Cemetery in Northfield. biermanfuneralhome.com.

To plant a tree in memory of Robert G. Law as a living tribute, please visit Tribute Store.
Load comments