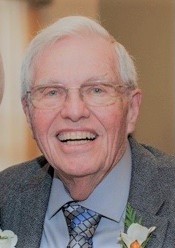 Thomas Barsness 1/4/1937–11/14/2020 Northfield—Thomas (Tom) Purdy Barsness, of Crosslake, MN, died Saturday morning, November 14th, at Three Links Care Center in Northfield. Born on January 4, 1937 in Westhope, N.D. to Olger Magnus and Helen Elizabeth (Purdy) Barsness, Tom grew up in Minnesota, graduating in 1954 from Elk River High School and in 1960 from the University of Minnesota in Pharmacy. As an avid Gopher fan, he was especially proud of playing his trombone for four years in the U of M Marching Band. In 1959, he married Sharon Lee Firehammer of Elk River. He spent the early part of his career as Chief Pharmacist at Mercy Hospital in Coon Rapids, and then worked in retail pharmacy in Brainerd, Northfield and for 26 years in Monticello where he owned Barsness Drug. Tom served in the 133rd Air National Guard for eight years which included one year on active duty during the Berlin Airlift. As a loving husband and father, Tom was happiest surrounded by his family, especially when at Cross Lake. He also loved his profession, singing with the church choir, playing golf, fishing trips, reading a good book and cheering for his beloved Gophers. He is survived by his wife of 61 years, Sharon; children, Tamsen (Ted) Barsness-Knudson of Sun Lakes, AZ, Jennifer (Troy) Sorensen of Faribault, and Jeffrey Barsness (Donna Boatman) of Forest Lake; nine grandchildren, two great grandchildren; and brother Dell (Betty) Barsness of Austin. He was preceded in death by his parents and twin sisters Janice Bang and Bernice Morrison. A Memorial Service will be held when it is safe to gather, sing and celebrate Tom's wonderful life at Crosslake Lutheran Church in Cross Lake, MN. biermanfuneralhome.com