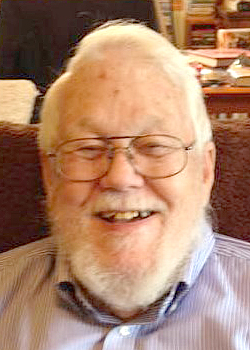 James Edgar Hammer 1937–2020 Cannon Falls—James (Jim) Edgar Hammer, 82, passed away February 15 at the VA Hospital of complications from heart surgery. The funeral will be held at 11 a.m. Saturday at Bethel Lutheran Church, Northfield, Minnesota. Memorial donations can be made to Pheasants Forever. Jim was born May 25, 1937 in Austin, Minnesota. He graduated from Austin High School and St. Olaf College in 1961. He spent the next three years as a Sp4 in the Chemical Corps, US Army at Hanau, Germany. There, he met his future wife, Dottie, and they married in Berkeley, California in 1963. He spent the next three years as a research chemist for Diamond Shamrock. He then switched careers and began his life-long calling as a teacher. They started in in Dillingham, Alaska, and then settled in Cannon Falls, Minnesota. Mr. Hammer was famous for his crazy neckties as a chemistry and physics teacher at CFHS. He was a founding member of the Cannon Falls Lions club where he was a Melvin Jones Fellow. As a sports fan he timed games at the high school and watched all Minnesotan teams. Failing retirement, he taught physics for two years with the Peace Corps in Botswana, Africa. A man of many talents, he built his own home and had a farm in Cannon Falls where he raised and showed registered Ayrshire dairy cattle. Finally retiring to East Leaf Lake he fished, hunted, and tapped maple trees for maple syrup. He had large gardens everywhere he went. His passion in later years was prairie restoration and pheasant habitat on a 110 acre section in Ottertail County. He and his wife traveled to over 35 countries. He is survived by his wife Dottie, two children Kirsten Hammer Gunn (Jeff) and Michael Hammer (Heather), as well as four grandchildren, Alex and Erin Gunn and Mitchell and Nathan Hammer. Preceding Jim in death were his parents, Manly and Edna, and his sister, Anne.

To plant a tree in memory of James Edgar Hammer as a living tribute, please visit Tribute Store.
Load comments