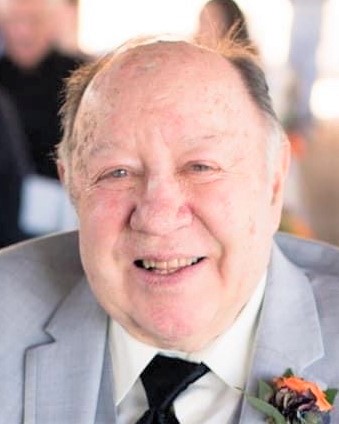 Marvin Grundhoefer 1927–2020 Northfield—Marvin Grundhoefer, age 93, went to be with the Lord with his family by his side on Thursday morning, October 15, 2020, at Reflections on the Three Links Campus. Marvin Landy Grundhoefer was born August 19, 1927, in St. Paul, Minnesota, to Landy and Stacia (Hennen) Grundhoefer. He was raised in Saint Paul where he attended St James School, Cretin High School, St. Thomas College and St. Paul College of Law (now Hamline Mitchell). In 1952, Marv moved to Northfield and started a law practice with classmate Robert Kucera. During his early years in Northfield, he met Jackie Hughes. They married on June 18, 1955 in Le Center, MN. Over the next 12 years they had 5 children. Jackie passed away on September 28, 1989, at the young age of 59. Marv was blessed again to find his second love and married Judy (Veilleux) Hagen in 1995. They have been constant companions ever since. Marv remained an "active" partner in his law practice for the next 61 years, although he was rumored to have retired around 2013. Music was a big part of Marv's life from a young age. It has been said that he joined the musician's union as a piano player at age 14 to fill-in for the lack of musicians in the Twin Cities due to WWII. Marv's love of music started with his father who played the banjo and violin; and his brother Jerry, who played multiple instruments including piano, clarinet and saxophone. Gatherings around Northfield were routinely known to include his lively piano playing. Marv was an active and proud member of the Church of Saint Dominic for over 68 years where he played the piano/organ for many years. While raising a large family, Marv still had time to join most every club in Northfield and was very civic minded. He was a two-time Mayor of Northfield - 1969 and 1992, He was president and member of many clubs and organizations, including the: Lions Club (member for over 60 years), Jaycees, Knight of Columbus, Northfield Golf Club, Northfield Hospital, Northfield Retirement Center; Cambridge Regional Treatment Hospital, DJJD Committee - Joseph Lee Heywood Distinguished Service Award winner. Survivors include his wife of 25 years, Judy; his daughter, Mary (John) Langan of Northfield; his sons, Joseph (Jodi) of Northfield, Michael (Libby) of St. Paul; his daughters-in-law, Mary Grundhoefer of Center City and Jane Grundhoefer of West St. Paul; his step-children, Eric (Jane) Hagen of Emily, Nina (Keith) Pumper of Northfield, Carl (Kim) Hagen of Faribault; 22 grandchildren; 16 great-grandchildren. He is also survived by many, many loved southern nieces and nephews in Alabama, Georgia, and Florida who would routinely come up to visit him. He would so look forward to those visits and his visits down there for the annual MAGNUM event. He was preceded in death by his beloved wife Jackie, his sons Thomas and Peter, his parents Landy and Stacia, his brother Jerry and sister-in-law Bernie, his sister Marilyn and nephew Bob. The family would like to acknowledge all the special relationships Marv made through the years at his law office, especially Melainey Schrot, Linda Hubbard, Tom Neuville and David Ludescher. They knew him as a person who was honest, precise, loyal, and generous with his time. Marv has made many other friends over the years, from his morning coffee group, the golf club, his handball group, and meeting his cribbage buddies at the Rueb-N-Stein. Marv's family would like to thank the caring staff at The Northfield Retirement Community, Three Links Care Center and Reflections for all the love and attention you have given Marv over the past few years. Mass of Christian Burial will be held at 11:00AM, Saturday, October 24, 2020, at the Church of St. Dominic. Seating may be limited based on available space under Covid-19 guidelines. Burial with Military Honors will follow at Calvary Cemetery, Northfield. For those who wish to pay their respects, viewing will be held at the Church of St. Dominic from 9:00AM - 10:30AM, Saturday, October 24, 2020. Masks are required and guests will be assisted with social distancing. www.northfieldfuneral.com