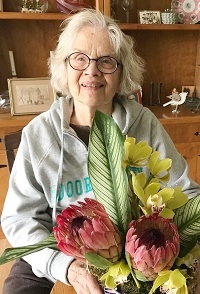 Elizabeth Anne Larson 1937–2020 Northfield—Elizabeth Anne Larson (nee Dahlsten) died in her sleep on October 11 at the Three Links Cottages in Northfield, Minnesota. She was eighty-three years old, born on September 1, 1937 on a farm near Lindsborg, Kansas, a Swedish American community in an area known as the Smoky Valley on the edge of the Great Plains. Elizabeth was part of the fourth generation to live on this farm that was homesteaded by her great-grandparents in the 1860s. Her birth was a community-wide event; there hadn't been a baby born there for six years because of the depression. She was the only girl in her country school when she started first grade but she learned to read, and never stopped. Elizabeth was nurtured by a large extended, and somewhat eccentric, family, and was especially influenced by four spinster aunts who believed that the most important adult priority was the welfare of children, so she was surrounded by good books, unconditional love, good humor, intelligent conversation, music, and art. She acquired a good sense of herself, shaped by the examples set by these strong women. She graduated from Bethany College in Lindsborg, Kansas, where two of these aunts were on the faculty; she majored in English and taught high school English for two years before getting a certificate in Library Science. In 1960 she married Loren Larson, a high school and college classmate, and they moved to Northfield, Minnesota in 1963, where he spent his career as a Professor of Mathematics at St. Olaf College. Shortly after, she joined the St. Olaf Library staff as Acquisitions Librarian, a perfect fit for her interests and abilities. She earned a reputation for her extensive knowledge of all acquisitions processes and for her dependability and thoroughness. Best of all, she loved her coworkers and friends, like-minded colleagues, especially the fun-loving "puzzies" who did jigsaw puzzles during their coffee breaks. She was valued for her informed opinions, insights, and occasional wisecracks, like the one they calligraphed and framed: "There are so many smucks in the world, you can't be nice to all of them." Women's rights were among her many causes, and she often expressed her views in letters to the editor of the Northfield News and Minneapolis Star-Tribune. Her work, however, was secondary to her deepest concerns for the well-being of her family and grandchildren, and her house plants. Reading was her lifelong passion; she belonged to two book groups and was an active participant in Northfield's Elder Collegium and was most proud of a book of memoirs that she wrote with her two brothers. Elizabeth silently battled health issues throughout her life, ending with four years of worsening vascular dementia. But she never forgot her family roots, the large farmhouse where she grew up, the gigantic cottonwood trees and the creek across the road where she read and bonded with owls and hawks and rabbits and snakes. Elizabeth is survived by her husband; her brother John Dahlsten and his wife Shirley; her brother Paul Stanley Dahlsten and his partner Becky Carver; and her children and their spouses and children: Anne Larson, Bruce Anderson, Maia Larson, Jakob Anderson; Eric Larson, Susan Lewis, Abigail Lewis, Bjorn Larson. A Memorial Service will be held later when conditions are more conducive to a group gathering. Memorials in her name may be given to The Nature Conservancy in Minnesota, The Humane Society of the United States, The Community Action Center of Northfield, or the Three Links Care Center in Northfield. biermanfuneralhome.com.

To plant a tree in memory of Elizabeth Larson as a living tribute, please visit Tribute Store.
Load comments