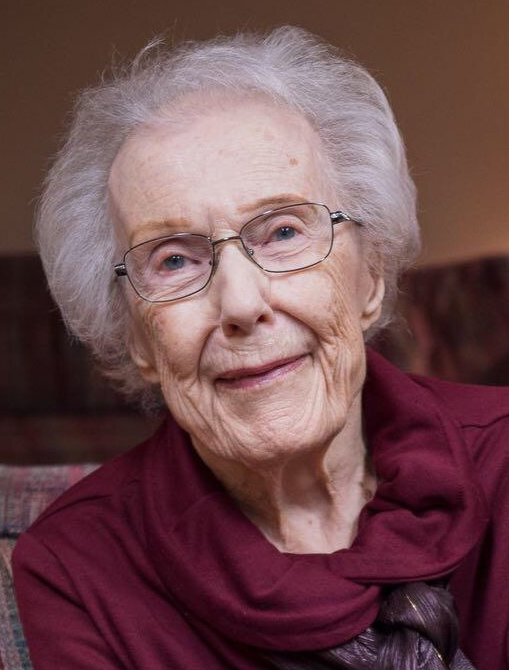 Lorraine Edlund Ciernia 1919–2019 Northfield—Lorraine was born in Minneapolis on November 23, 1919. She died in Northfield on December 30, 2019, having recently celebrated her 100th birthday with family and friends. Along with her mother and siblings, Lorraine moved to California in 1935, graduating from Fairfax High School in Los Angeles in 1937 and earning an Associates degree from Los Angeles City College in 1939. After her schooling, she worked in various clerical and administrative positions for Bell Telephone and the U.S. Navy during WWII. Following the death of her father, Carl H. Edlund, she returned to Minnesota in 1946 where she met and then married the love of her life, Martin H. Ciernia, a Marine veteran and University of Minnesota student in mechanical engineering. Lorraine spent the next 52 years with Martin, raising six children, and making homes in Ohio, Illinois, and Minnesota. Lorraine was an active crafter throughout her life, owning numerous knitting, embroidery, and sewing machines. She started out sewing clothes for her children and went on to use her skills and equipment to operate a small business, Minnesota Looms, that produced kites, windsocks, baby blankets, and much more that she sold at craft fairs throughout the State. Lorraine was very proud of the Blue Ribbons she won at the Minnesota State Fair. In later years, she would offer embroidered angels to all of her caregivers, bringing smiles to the faces of the people who cared for her. Lorraine loved anything that promised to make homemaking easier and was an early adopter of all gadgetry that promised such advances. From microwaves, to food dehydrators, to food sealers or electric woks, Lorraine did not let life pass her by. From digital embroidery and laptops to iPhones and iPads, Lorraine embraced technology and made it part of her life. Lorraine and her late husband, Martin, were foster parents for many years and cared for several dozen infants and toddlers during that time. As a life-long Christian, Lorraine viewed foster care as an affirmation of what responsible adults are supposed to do in the world, and a practical application of her Christian ideals. Lorraine is survived by her children Bob (Suzannah), White River Junction, Vermont and formerly of Northfield; Steve (Patty) of Northfield; Mike (Vicki) of Northfield; Cindy (and Skeeter Herndon) of St. Petersburg, Florida; Mary (and Don Schulz) of Chanhassen; Josh (Laura) of Eugene, Oregon; and, 17 grandchildren and 7 great-grandchildren. A Memorial Mass will be held at the Church of St. Dominic in Northfield on Saturday, January 4 at 10:30am. In keeping with Lorraine's wishes, in lieu of flowers the family requests donations be made to the Northfield Community Action Center or to Sharing and Caring Hands in Minneapolis. Lorraine donated her body to the Mayo Clinic for research. Interment will be at a later date at Fort Snelling National Cemetery where she will be reunited with her husband, Martin H. Ciernia.

To plant a tree in memory of Lorraine Edlund Ciernia as a living tribute, please visit Tribute Store.
Load comments