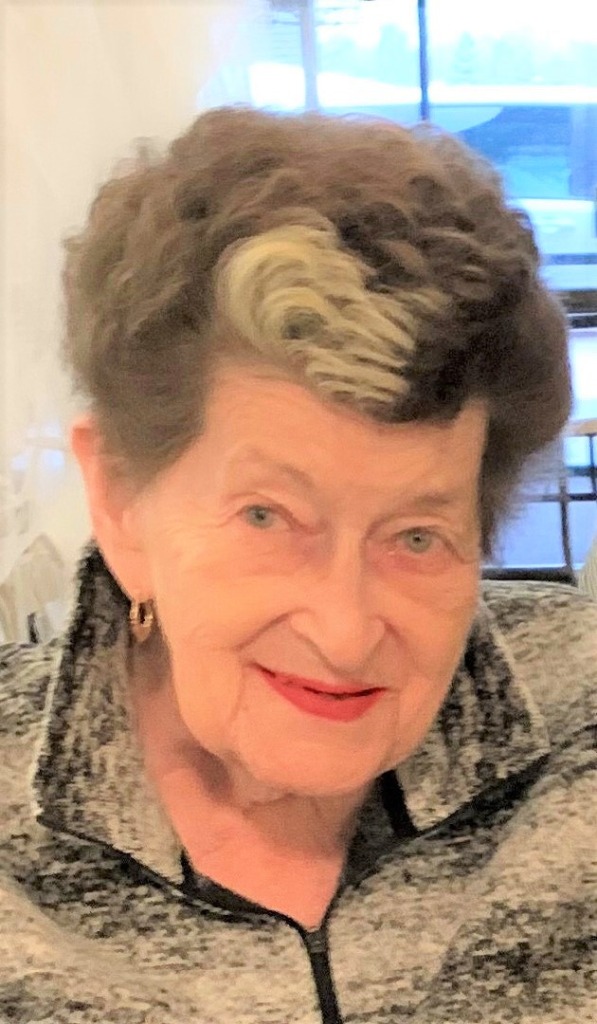 Marcella "Marcy" Leahy Splichal Pritchard 1929–2020 Northfield—Marcella "Marcy" Leahy Splichal Pritchard, 91, died peacefully at her home surrounded by family on Monday, August 3, 2020. Marcy Leahy was born on July 4, 1929, to Henry and Marie (Schreiner) Leahy in Northfield. She grew up on a farm near Webster and graduated from Northfield High School in 1947. She was a very social person, surrounding herself with family and good friends. Her daughter Kari jokes that no matter where in the world she traveled, she could never misbehave, because Marcy knew everyone and would somehow find out. In many ways, it was true; Marcy was everywhere. She looked out for others, including cheering at sporting events, plays, and science fairs for her children and grandchildren. She loved talking on the phone and being with family and friends, and every guest in her home received her undivided attention. Marcy's whole community benefited from her presence. For almost 40 years, she was one of Northfield Special Olympics' strongest supporters, was committed to and incredibly good at fundraising, and enjoyed cheering on all the athletes, especially her son Erik. Together with her daughter Dawn, Marcy co-founded the Area 10 Minnesota Special Olympics Annual Holiday Party at the Northfield Ballroom. The first holiday party occurred over 25 years ago and that tradition lives on, creating an opportunity for approximately 350 athletes, coaches and family members from 11 southeastern counties to dance, celebrate and socialize every December. Marcy was a resilient, hard-working woman. At age 13, she endured the loss of her mother to cancer. As a young mom in her 20's, Marcy contracted and overcame polio, receiving care at Sister Kenny Institute in Minneapolis. She was widowed twice and also lost a fiancé, Emmett Wagner, in a construction accident. No matter what life gave her she found the strength and resilience to keep going. She met Edward Splichal in high school. Out of school, he served in the Navy. They married in 1948 after he returned. They lived in Northfield and had two children, Anne Marie and Dawn. Ed died in an auto accident in 1963. In 1978, Marcy married John Pritchard, a widower with 3 children, Kari, Mark, and Erik, from his first marriage. John passed away from a heart attack in 1983. Undoubtedly, Marcy's crowning life achievement was raising her son, Erik Pritchard, from 1978 to the present. Erik is the heart and soul of a beautiful, blended family, and Marcy's unconditional love for him was truly something to behold. Erik returned Marcy's love, and they formed an inseparable and remarkable twosome that brought good cheer to Northfield and beyond. She worked countless different jobs over the years to support herself and her children. These included running the Western Union Telegram Office in Northfield, sales roles, managing the Northfield V.F.W., office manager at Thorpe Realty, and she was one of the first two women to drive taxis in Northfield in the early 1950s. Marcy will be remembered for many things, including her red lipstick, beautifully painted fingernails, her Irish wit, and the trademark blonde streak she maintained in her hair. She will also be remembered for her love of family, which they returned in spades. Marcy, you are so loved and will be missed. Marcy is survived by her children, Anne Marie Hong (Ted) of Northfield, Dawn Splichal (Robert Kubiak) of Lake Byllesby, Kari Pritchard (Robert Wilder) of Rochester, Mark Pritchard (Julie) of Northfield, and Erik Pritchard of Northfield; grandchildren, Zachary Holden (Jeanine), Blythe Holden (Doug Trussler), Brendan Wilder, Maren Wilder, Ingrid Wilder, Elizabeth Pritchard and Caroline Pritchard; great-grandchildren Greer, Siri, Axel and Howie. She was preceded in death by her first husband, Edward Splichal, second husband, John Pritchard, and sister Catherine Nelson. A visitation was held at Bierman Funeral Home and a funeral liturgy at the Church of Saint Dominic. Interment was in Northfield Cemetery. In lieu of flowers, memorials are suggested to A Great Day Farm, 5575 115th Street East, Northfield, MN 55057. www.agreatdayfarm.org. A Great Day Farm was created to provide no-fee recreation and life enrichment for people with developmental disabilities. biermanfuneralhome.com