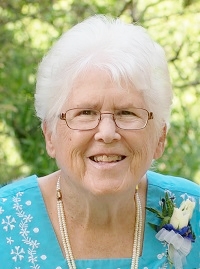 Dorothy J. Pavek 1934–2020 Lonsdale—Dorothy Pavek, age 85, of Lonsdale, passed away on Monday, June 15, 2020, at the Villages of Lonsdale. Dorothy was born the daughter of Roland and Catherine (Dettling) Tralle on December 8, 1934, in the old Northfield Hospital on Water Street. She attended Northfield High School, graduating in 1952. In 1953, Dorothy was united in marriage to Francis "Fritz" Pavek. Dorothy went on to work for Sheldahl, Malt O' Meal, and the canning company in Faribault. 1956 was especially hard for Dorothy. After losing their eldest son at infancy, Dorothy's sister passed away from cancer, and later that same year, her parents passed away from injuries sustained in an auto accident. Dorothy and Fritz took in her brothers and helped raise them all the while starting their own family. The family made their home in Lonsdale, then Dundas and in 1969, they moved to Northfield. The most satisfying job, as Dorothy always said, was taking care of her grandchildren and helping take care of other children. Fritz and Dorothy would travel together while he drove semi throughout the country. Fritz passed away in 2017. Dorothy enjoyed gardening, have you seen their yard? Her flowers always looked so good. She was outside enough that everyone knew where she lived. She also enjoyed Tri-chem, plastic canvas, sewing, and cooking. Her rhubarb cake and homemade rolls are loved by all of us. She will be remembered as being strong, independent, and a hard worker. She is survived her children Gerald Pavek (Teresa Pickar) of Lonsdale, Roland (Lynda) of Dundas, Catherine (Michael) Flicek of Northfield and Francis "Butch" Pavek (Dorothy Locke) of Northfield; five grandchildren; four great-grandchildren; her brother Roger (Beverly) Tralle of Dundas; and her sisters-in-law Julia Bild of Cottage Grove, Gayle Aldrich of Faribault, Mary Tralle in Washington and many nieces and nephews. She was preceded in death by her husband Fritz (2017); a son at infancy; a sister Dolores Tralle; her brothers Frank and Duane and her parents. Mass of Christian Burial will be held at Church of St. Dominic on Friday, June 19, 2020, beginning at 10:30 AM. Visitation will be at Bierman Funeral Home on Thursday, June 18, 2020, from 4:00 PM to 7:00 PM. Face masks are recommended, and the funeral home asks you to wait at the front door for instructions before entering, as there are limitations to the number of people that can enter. Interment will be at Calvary Cemetery in Lonsdale. biermanfuneralhome.com.

To plant a tree in memory of Dorothy J. Pavek as a living tribute, please visit Tribute Store.