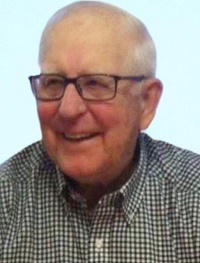 James William Burns 1928–2020 Northfield—James Burns, age 92, of Northfield passed away on Thursday, June 25, 2020, at Abbott Northwestern Hospital in Minneapolis. James William Burns was born April 29, 1928, in Sargeant, Minnesota, to Clarence and Florence (Heydt) Burns. After graduating from Austin High School in 1946, Jim joined the Army Air Corps. After his discharge, he helped on the farm before taking a position at Sargeant State Bank and then Stewartville National Bank. He was united in marriage to Margene "Marge" Anderson on July 20, 1949, at EUB Church in Sargeant, and they made their home in Waltham where they owned the hardware and plumbing store. Jim also worked as an auctioneer. The couple moved to Dundas in 1963, and Jim owned the Dundas State Bank and Farmer's State Bank of Nerstrand. In his final years of employment, he spent many happy hours driving charter buses for Benjamin Bus Company (Northfield Lines) with sports teams, St. Olaf and Carleton College students and charter travel routes. His love of humankind and travel provided him many memories he cherished. Jim was a caring and devoted husband, including taking care of Marge during her final illness. Jim was a member of the Masonic Lodge and Order of the Eastern Star. He enjoyed bowling, fishing, golfing, and sang in men's choir in Rochester and in the church choir at Northfield United Methodist Church. Jim enjoyed traveling, especially trips to Europe, Spain, and Mexico. Survivors include his children Sandy (Jeff) Landon of Brainerd, Lorie (Robert) Tuma of Northfield, Randy (Sue) Burns of Omaha, NE, Jim (Tina) Burns of St. Paul; nine grandchildren; 15 great-grandchildren; his brothers Erling (Irene) of Rochester, Carlton (Deanna) of Stewartville; and his sister Donna Hansen of Sargeant. He was preceded in death by his wife Marge (2007); his infant son Warren; his daughter-in-law Michele Burns, his brother Marlyn, his sister Dorothy Anderson and his parents. Visitation will be at Bierman Funeral Home on Saturday, July 11, 2020, from 10:00 AM to 11:30 AM. Face masks are recommended, and the funeral home asks you to wait at the front door for instructions before entering, as there are limitations to the number of people that can enter. Graveside services will be at Waltham Township Cemetery near Hayfield on Saturday, July 11, 2020, beginning at 2:30 PM. In lieu of flowers, memorials are preferred to the Community Action Center of Northfield, 1651 Jefferson Pkwy HS-200, Northfield, MN 55057 or Shriner's Hospital for Children. biermanfuneralhome.com.