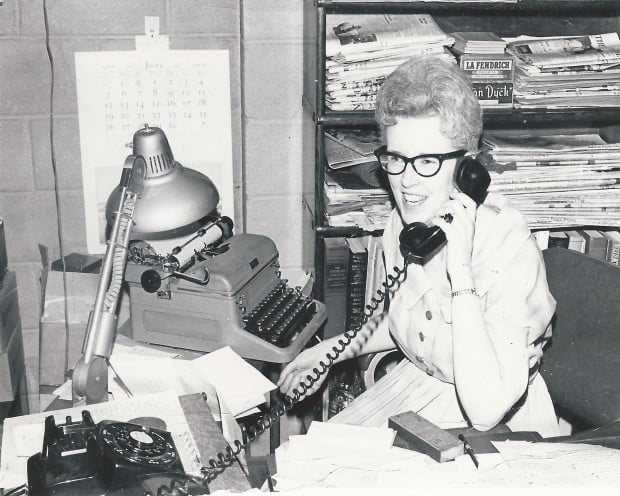 Longtime Northfield News editor Maggie Lee works at her desk in 1966, back in the days when she put in 80 to 90 hours a week (News file photo) 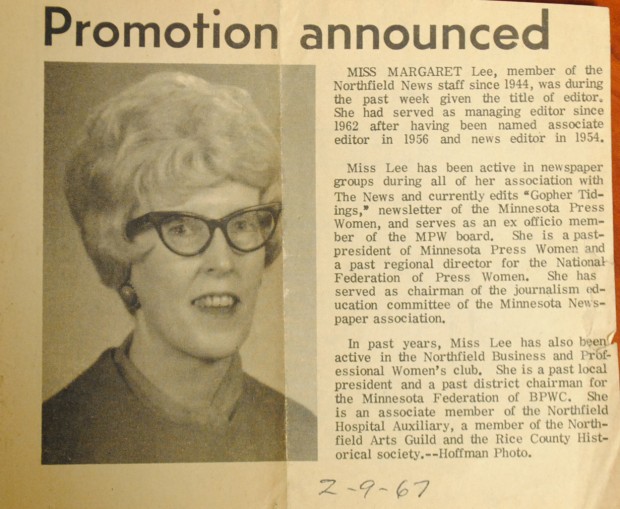 A Northfield News clipping from February 9, 1967 announcing Maggie Lee's promotion to editor. The photo, according to the article, was taken by Hoffman Photos. 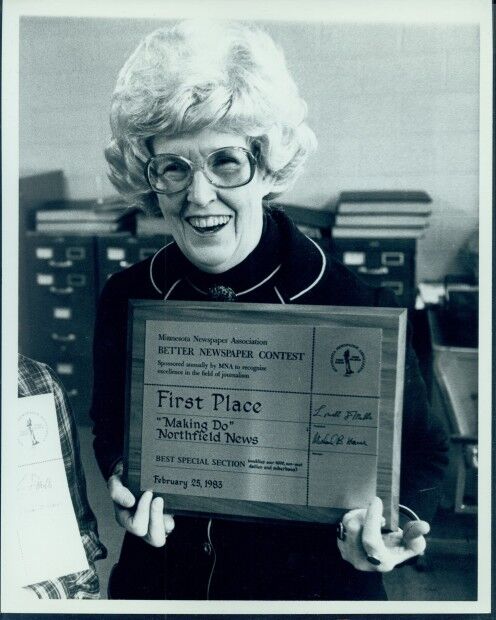 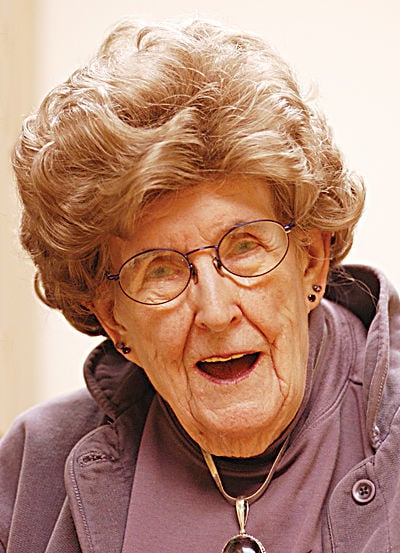 Longtime Northfield News editor Maggie Lee works at her desk in 1966, back in the days when she put in 80 to 90 hours a week (News file photo)

A Northfield News clipping from February 9, 1967 announcing Maggie Lee's promotion to editor. The photo, according to the article, was taken by Hoffman Photos.

This is the third in a series of columns that longtime Northfield News reporter and editor Maggie Lee wrote in May 2004 about her experiences with the News. Lee celebrated her 60th anniversary with the News during a public open house later that month.

Folks have asked me how it was to be a woman editor back when I was named to that post in 1967. There had not been a woman editor of the News at that point, but I must say that Northfielders were perfectly accepting. I never felt any kind of resentment.

Of course I had by then been covering city council and school board meetings for some time. That may have softened up the subscribers. During those years I rather often found myself the only women in a room full of people.

Something else that helped, I would guess, was the presence of Agatha Doyle, a popular person in Northfield. I can't remember when she began work as Northfield reporter for the Faribault Daily News. It was after the conclusion of World War II, because she worked in the Faribault office of that paper while many members of the staff were away serving in the military — even though she lived in Northfield.

She was born at Stanton and grew up there. But she moved into Northfield with her parents when she was a young adult. She had early on been employed at the Northfield News and later at a paper the News absorbed in the 1960 — the Northfield Independent.

I can't remember whether she was covering Northfield public meetings when I started to do so, but for many years it was the two women reporters at work at those two posts.

We got to be really good friends even though we were working for competing publications. For years we went out to dinner together before the meetings. At any rate no one thought it strange that women were covering those meetings.

Neither was it considered strange in Minnesota Press Women, the state organization in which I was active, for a woman to be editor. I joined as a reporter while World War II was still raging. As I mentioned in a previous column, many of the other members were wives of servicemen and were taking their husbands' places as editors and publishers while the men were overseas. As soon as the war was over, most of them went back to being homemakers, so that by the time I became editor of the News, it was perhaps a little unusual for a woman.

As I remember, the only local person who gave voice to objecting to a woman editor was a comparatively young man who lived in one of the mobile home parks. He was downtown frequently, always dressed in blue denim and always barefoot. I … hoped I wouldn't encounter him on a Northfield street after dark.

When he stopped in the News office — rather often, unfortunately — he refused to talk with me and relayed his thoughts through another staff member, who was not always a man. I guess a woman staff member was OK if she was not editor! I can't any more remember what his complaints were.

One summer the Minneapolis Star took on members of the Minnesota State Senate who the paper accused of being sold out to various sorts of interests. I think there were seven of them. Every one of the group was defeated in the forthcoming November election.

One of the men was supposedly sold out to trucking interests and sure enough, when he was no longer a member of the legislature, he accepted a job representing the owners of fleets of semis. They were trying at the time to make the use of "double bottom" trucks legal on state highways. (I don't any more remember what a double bottom truck is, but the size of present-day semis makes me think they must have been accepted.)

At any rate this trucking representative stopped in at the News office one afternoon and announced in a loud voice that he wanted to take the editor out for a drink. I looked over at the counter and decided I did not want to invite the fellow back to my desk. I might have trouble getting rid of him, I thought. So I strolled up to the counter.

"Oh, I wanted to see the editor," the man said. "I AM the editor," I replied. He was suddenly convulsed with laughter. He struggled, but he couldn't stop laughing.

Finally he pulled a bunch of printed material out of his pocket and shoved it toward me. "Here, read this," he gasped and bolted out of the door.

Maybe there were other men who didn't approve of my station in life, but they didn't let me know about it.

When I was thinking about Aggie Doyle, I remembered that after she retired, a man was given her assignment.

The City Council met in the large room on the second floor of what is now the Northfield Arts Guild headquarters downtown, but was then city hall. At that point the newspaper representatives no longer had the little table, but we were given a sofa to sit on. Council meetings frequently continued well after midnight in those days and both this fellow and I were known to doze off.

Finally some kind of social occasion was sponsored by the council and the man reporter had his wife in tow. After he introduced us, mischievous Maggie pointed out the davenport to her and said, "That's where Bernie and I occasionally sleep together."

Thank goodness the council meetings do not last that long as a rule at this time. But I think the council's business is much more complicated than it used to be. That even happened in those years I was covering the council. At first I used to knit while I observed the action, only occasionally taking a note. I was kidded about being Madame LaFarge of the French Revolution. But that became less and less possible. Notes had to be made fast and furiously.

For some reason I always enjoyed council action over school board action. But back in "my day" there was a bonus to covering school board. The hot lunch crew always left a very nice lunch for the board and the reporters to eat at the end of the meeting. We traipsed down to the lunch room to eat it.

Sometimes discussion of some hot issue continued down there. A reporter didn't dare miss the lunch. I don't remember that action was ever actually taken, but wrinkles were ironed out over the delicious food and the board went home with a better idea of how things were going to be done.

It seems to me that I needed to give up covering meetings when I became editor. I was too busy. I need to dig back into memories to discover how we set type and how we edited during the various decades. I have lived through several of them!

Longtime Northfielders may remember "Long Division" as the name of a long-running column by former Northfield News Editor Maggie Lee.

Lee, a true townie who worked for the News for 68 years, wasn't just a Northfielder, she was a living, breathing advocate for all things Northfield. Her column, Long Division, which ran for years, started with a trip through downtown and included tidbits she picked up along the way.

It was Lee who helped pushed for a historical society separate from the county, who urged Chip DeMann to make the James-Younger Gang more authentic and who, on a trip to San Antonio, decided that Northfield, too, should have a Riverwalk. A portion of the city's Riverwalk is named in her honor.