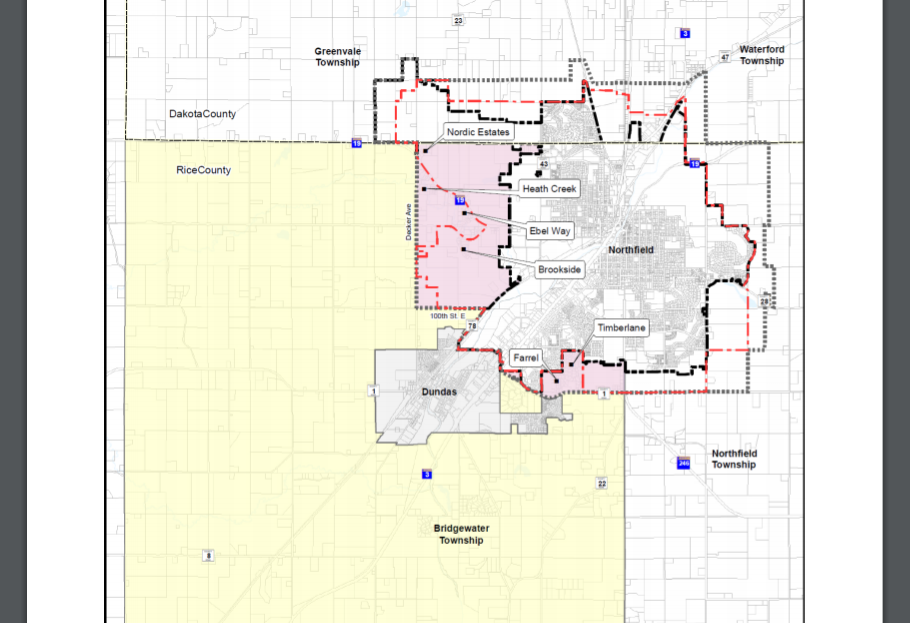 The areas of Bridgewater Township shown in pink are where the city of Northfield is discussing seeking to immediately annex if the township incorporates. The city is also considering annexation of other areas if that happens but has not publicly discussed those areas. (Image courtesy of city of Northfield)

The Northfield City Council on Monday again signaled its desire for Bridgewater Township to not seek incorporation.

In a framework the council approved that will guide the city in future negotiations with the township, officials said a decision by Bridgewater Township to incorporate “would essentially permanently fix (Northfield’s) boundaries, abutting newly incorporated areas and eliminate the city’s ability to grow to serve such areas.”

Bridgewater leaders have said the greater goal of incorporation is to maintain the township’s status as an agricultural, rural, land-friendly entity. One of the most vital steps in doing that is to maintain its roads. As a township, it can’t access state highway funds that cities and counties can.

Township officials have also frequently cited controlling boundaries and zoning to establish local control, preserve quality ag land and broadening the tax base as main reasons why they are considering petitioning for incorporation.

The city says any long-term agreement for concurrent detachment and annexations between the city and Bridgewater would not be viable if the township incorporates.

“The city has invested millions of dollars of public resources planning for, building and properly sizing municipal infrastructure for services (sanitary sewer, drinking water, storm sewer, roads and bridges) to meet the current and future growth of the city,” according to the city. “The incorporation of areas of Bridgewater in close proximity to the city would have the effect of wasting the city’s significant investments in planning for and installing such transportation and utilities facilities and infrastructure to serve future growth areas in an orderly manner.”

To the city, if Bridgewater incorporates, there “would likely” be inefficiencies and unnecessary and wasteful duplication in delivering needed municipal services as well as conflict regarding future regional growth.

Due to anticipated negative effects of incorporation on Northfield, the city raised the possibility of seeking to incorporate portions of Bridgewater Township, including Heath Creek, Ebel Way and Brookside areas on the north side of the township. The second area the city would immediately seek to annex includes Farrel and Timberlane subdivisions south of Northfield.

The City Council in June signaled its willingness to extend the annexation agreement with Bridgewater Township for five years, but only if the township agreed not to file a petition for incorporation during that period. No definitive answer has been given by the township.

The council expressed interest in helping the township generate revenue by means other than incorporation, including supporting any efforts by Bridgewater and/or working cooperatively with the township and Rice County to change the county’s zoning regulations to allow for revenue-generating development in Bridgewater.

The council also authorized the city’s finance director to transfer $50,000 from the wastewater fund and $50,000 from the water fund to the general fund to cover legal fees. The move came as the city said it was exploring the need for additional supplemental funds and related professional services for the potential incorporation.

The city says the wastewater funds are being transferred because they are services the city pays for that serves areas outside of city limits.

In being the lone no vote on the two resolutions, Councilor David DeLong said the city was using language that tried to diminish the confrontational tone of the agenda items. He noted Northfield could still grow in directions other than the west if Bridgewater incorporates and questioned whether Northfield taxpayers had really invested millions of dollars in the area possibly impacted by an incorporation decision.

Mayor Rhonda Pownell and Councilors Brad Ness and Jessica Peterson White are members of a council subcommittee looking into the issue.

In supporting the measures, councilors said they were acting so that they had enough time to review legal services before they could be needed.

Peterson White acknowledged the township is trying to alleviate problems it faces, but she wants to make sure the investments of Northfield taxpayers are protected. To her, the best solution to the situation is the extension of the orderly annexation agreement.

“We hope that’s where things go,” she said.

“The petition has been ordered to be drafted,” Peterson White said.

In expressing support for Bridgewater Township, resident Bruce Morlan said the state has made townships “second-class citizens” and pledged that the rural landscape would be maintained if Bridgewater becomes a city.

Councilor Erica Zweifel said if the township wanted to extend the orderly annexation agreement, it would have informed the city by now.

“I am in favor of this and really providing our community with the education and resources they need,” she said of the council resolution.

Councilor Suzie Nakasian said she agreed with Zweifel and took issue with the idea that the council was being contentious by passing the resolution.

Pownell noted Bridgewater has already engaged lawyers in relation to the possible incorporation, and to her, the city is only preparing its response to possible township action.

In other action, the council:

Rezoned 2280 Cannon Road from highway commercial to industrial to accommodate construction of a storage unit.