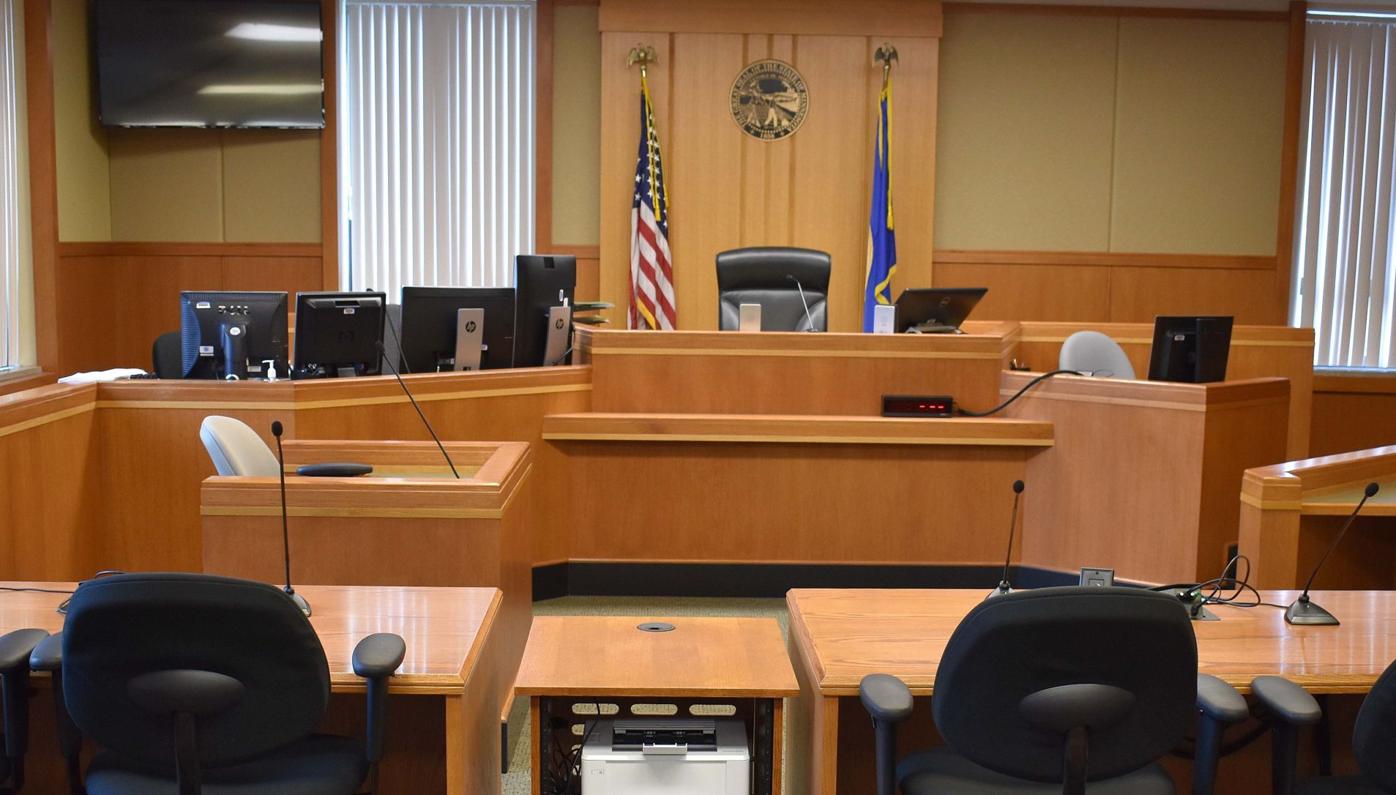 Local prosecutors, defense attorneys and court administrators say despite a difficult start to remote hearings brought on by COVID-19, the process has become more efficient and even proven more efficient in some instances. (File photo/southernminn.com) 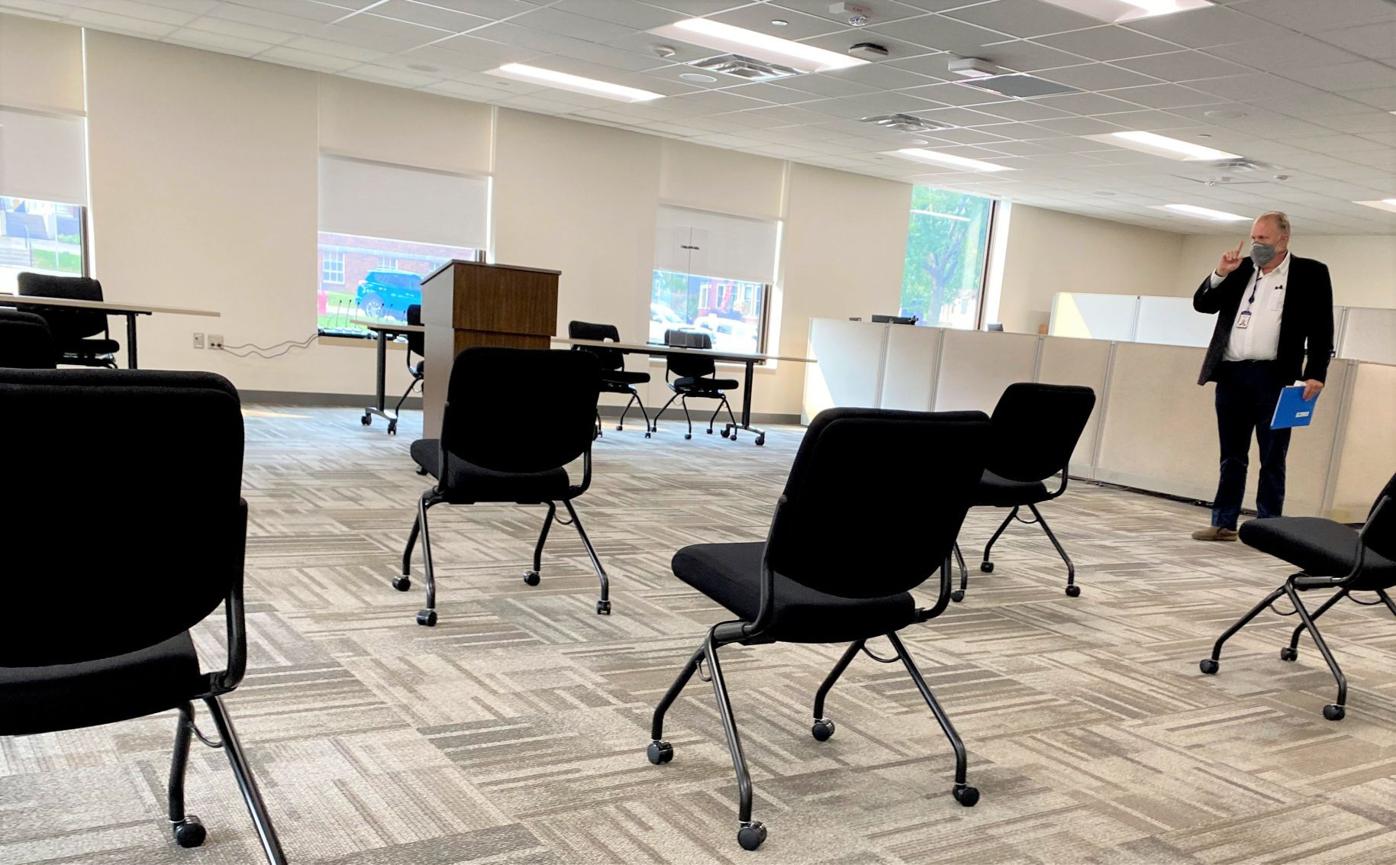 Rice County Attorney John Fossum stands in a temporary courtroom in the Rice County office building in Faribault next to the courthouse. The chairs are apart to ensure social distancing guidelines are met. (Suzanne Rook/southernminn.com) 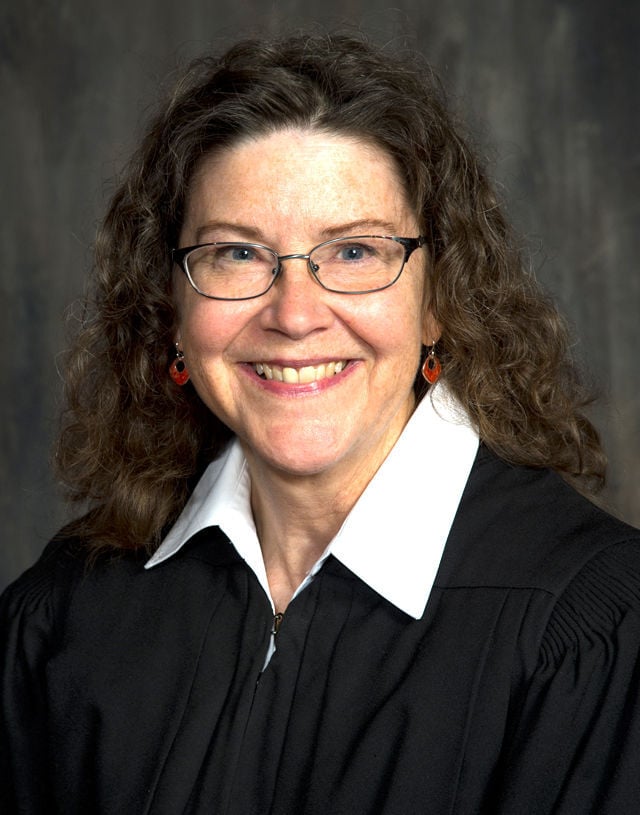 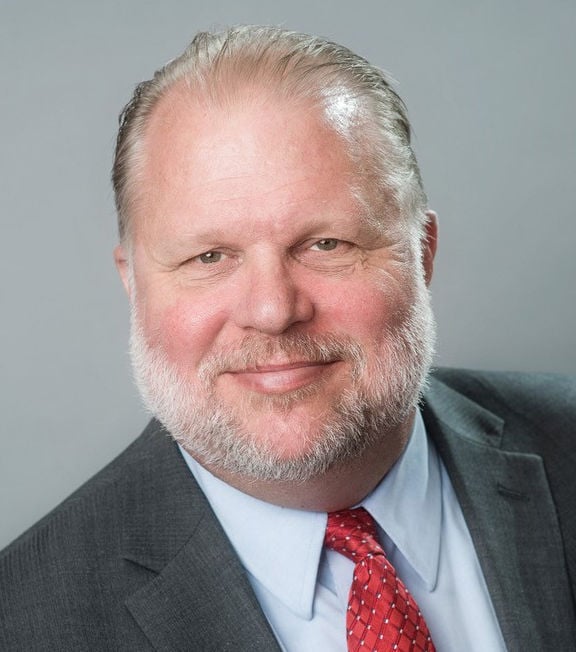 Local prosecutors, defense attorneys and court administrators say despite a difficult start to remote hearings brought on by COVID-19, the process has become more efficient and even proven more efficient in some instances. (File photo/southernminn.com)

Rice County Attorney John Fossum stands in a temporary courtroom in the Rice County office building in Faribault next to the courthouse. The chairs are apart to ensure social distancing guidelines are met. (Suzanne Rook/southernminn.com)

Though regional legal professionals have become more adept at handling remote hearings brought on by COVID-19, a state pause on criminal jury trials until at least March will likely leave a backlog well after the heavily burdened court systems returns to normal following the pandemic.

Rice County Attorney John Fossum noted there are more than 200 jury trials the county’s court administration office is working to reschedule. He noted that in most instances, six or seven jury trials are scheduled on a weekly basis but only one or two make it that far without a settlement being reached. Still, he anticipates a long-term backlog due to the pandemic.

“It’s always a moving target, and more cases come in all the time,” he said.

“It’s going to be a larger than normal backlog for some time.”

Prosecutors and defense attorneys both say a prolonged timeframe can harm their cases by shifting their focus to multiple legal files at once. Defendants can feel the burden of a court case for a longer time, and victims have to live with the realization that the alleged perpetrator has yet to be punished.

Fossum said Rice County could bring in judges from other counties or have retired judges work temporarily to ease that backlog, but doing so doesn’t negate the limits on space. The county has four courtrooms, all too small to accommodate a jury trial with social distancing. Space in the county office building next to the courthouse converted to a temporary courtroom can again be used when the court system reopens, giving the county additional space. But it still has only three judges chambered in Faribault.

Despite those limitations, Fossum, who is in his seventh year as county attorney, said the court system is just as busy as ever. The Rice County Attorney’s Office has had nearly as many criminal vehicular homicide cases in September and December — two — than in the rest of Fossum’s tenure. He attributes that to more people driving at a higher speeds, fearing the legal consequences, and an increase in drug and alcohol use during the pandemic.

Steele County Court Administrator Robin Hoesley said the county’s focus since the start of the pandemic has been keeping the courts open and accessible while prioritizing safety, an approach she acknowledged has been “a delicate balance.” She noted the county has worked with additional temporary staff who are being utilized to be Zoom hosts, adding she was fortunate to not have vacancies following a hiring freeze instituted following the onset of the pandemic. That pause has since been lifted, allowing staff to fill open positions.

Court administration staff is now sending notices to those involved with court cases that include Zoom meeting information, a departure from what traditionally had been an in-person process.

“We’re doing our best to stay on top of the work and keep the system going,” Hoesley said.

She acknowledged that “it’s really almost impossible” to know how long court restrictions will last due to ongoing uncertainty around the pandemic. In March, 40 jury trials are scheduled in Steele County. That number drops to 29 in April, 30 in May and nine in June. Hoesley also anticipates that a number of those cases will likely be resolved before a jury trial begins.

Once Rice County court administrators realized they couldn’t hold traditional in-person jury trials, they worked with county leaders to create a the fifth courtroom. That approach proved fruitful until November, when in-person courts were again shut down, a measure health officials said were needed to prevent the spread of the virus. The courts won’t open again until at least March 15. Even when jury trials were allowed in Rice County, there were a couple cases where the proceedings were delayed due to someone being exposed to the virus. In one case, a mistrial was declared.

Court Administrator Lisa Kuhlman said Rice County District Court had “a considerable amount of backlog” immediately following the onset of the first state shutdown. However, since then, that backlog has been reduced to mainly just in-person jury trials until at least March 15, unless the defendant awaiting trial is in custody or is seeking a speedy process, or, in some instances, the type of criminal charges a person faces. All other hearings have been rescheduled.

Online hearings are reportedly becoming easier to administer. To Kuhlman, county administrators have “done a tremendous job of adapting to that.”

Kuhlman said online meetings have reduced the number of failures to appear amongst defendants, lessened transportation challenges and increased the number of people appearing for their hearings.

“It’s going actually better than expected,” she said. “At first there was a lot to learn.”

Even after the pandemic subsides, she anticipates Rice County District Court will continue to offer online hearings in some instances, like civil and family cases and those with long travel times for relatively short hearings.

In Waseca County, a one-judge county where online court hearings are now also the norm, Court Administrator Shannon Asselin also said the court system no longer has a backlog other than for criminal/civil trials, a development she said could be possible due to the relatively small size of the county and lack of jury trials. Court administration has created a self-help center for clients to use the remote hearing system.

“We’ve been able to meet this challenge too because we’ve had the help of our justice partners,” Asselin said.

Though Steele County Attorney Dan McIntosh believes remote hearings brought on by the pandemic are “not ideal,” including one recent instance when a phone died and caused a one-day delay in a court hearing, he noted there isn’t a major backlog other than cases set for jury trials. He noted in the initial stages of the pandemic, the court system couldn’t process the regular number of cases while undertaking exclusively online hearings. However, McIntosh noted participants have adapted.

Still, McIntosh, a self-described “creature of habit,” said online hearings have resulted in the loss of some non-verbal aspects of in-person court hearings. Also, waiting times before court appearances can give lawyers the chance to communicate with each other. The court system has hired an online moderator to help with technological glitches.

‘The court moves at its own pace’

Faribault-based lawyer John Hamer immediately thought remote court hearings would be “a big problem,” last March. Since then, Hamer has noticed the changes have forced him to work more outside of the courtroom/courthouse setting. He said handling business over the phone and via electronic filing has proven to be more efficient.

The court system has undergone “a pretty broad adaptation” to utilize technology during hearings. Because of that adaptation, Hamer also expects some of the technological components to be used once the pandemic ends. He said courts are still reluctant to call juries for non-criminal cases because of the continuing pandemic, causing a backlog to develop. To him, the court system should have adopted the changes COVID-19 eventually wrought before last spring, adding that doing so might have reduced any backlogs and saved some law firms that have shuttered over the last 11 months.

In noting the unprecedented levels of stress many Americans have felt during the pandemic, Hamer said he has stressed to his clients that despite the anxiety posed by seemingly never-ending cases, they can rely on him to shoulder the burden of the system.

“The court moves at its own pace,” he said of what he tells his clients.

Steele County Judge Karen Duncan said the pandemic has made work harder for staff. Initially, case clearance rates were initially in the 30% range, but that has since more than doubled.

Duncan, who was appointed by Gov. Mark Dayton in March 2013, says some find online difficult to manage while others have an easier time.

However, she said remote hearings are having some benefits. Anecdotally speaking, she said more people who are not directly involved in the trial now feel more comfortable listening into hearings because of the elimination of travel time and ease in doing so. Still, Steele County courtrooms are open if visitors wear masks.