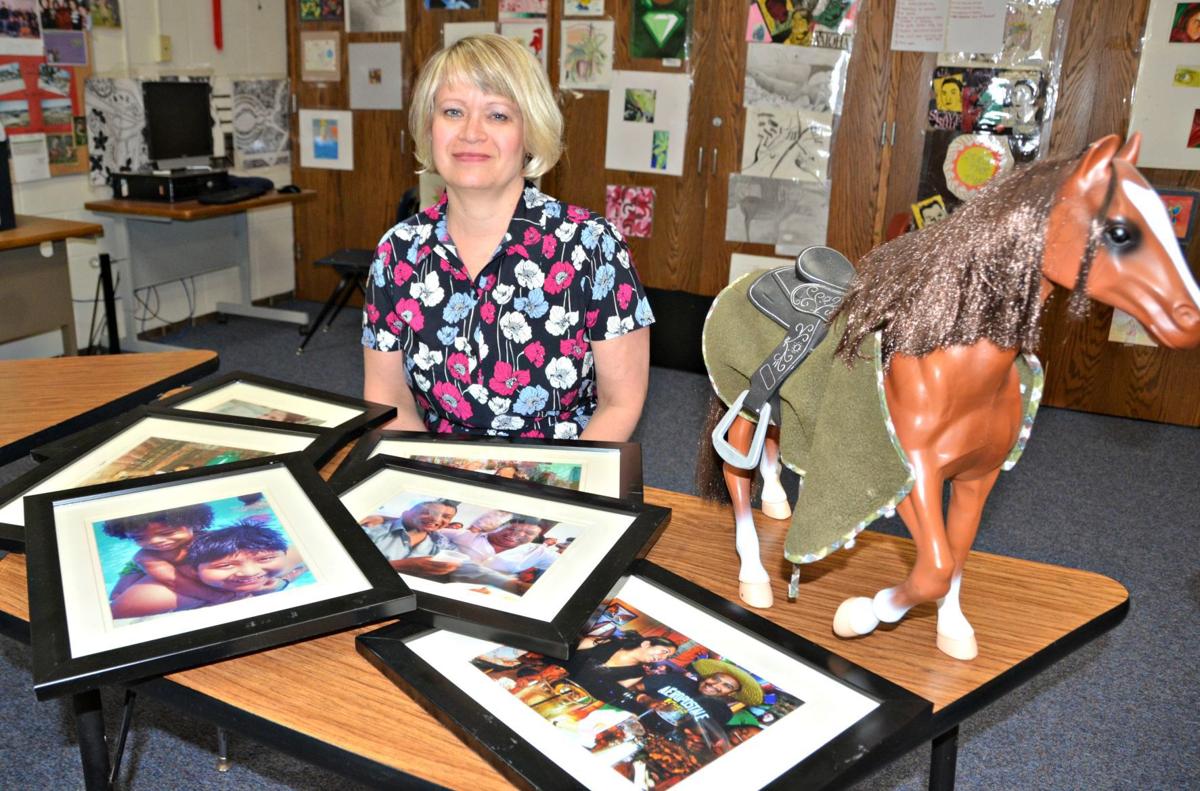 Jennifer Lompart poses with a model horse and several framed pictures taken by her Latino students at Northfield High School over the years. Lompart finished in the top 10 for the 2015 Minnesota Teacher of the Year, honoring her service to the English Learner and Latino populations. (Philip Weyhe/Northfield News) 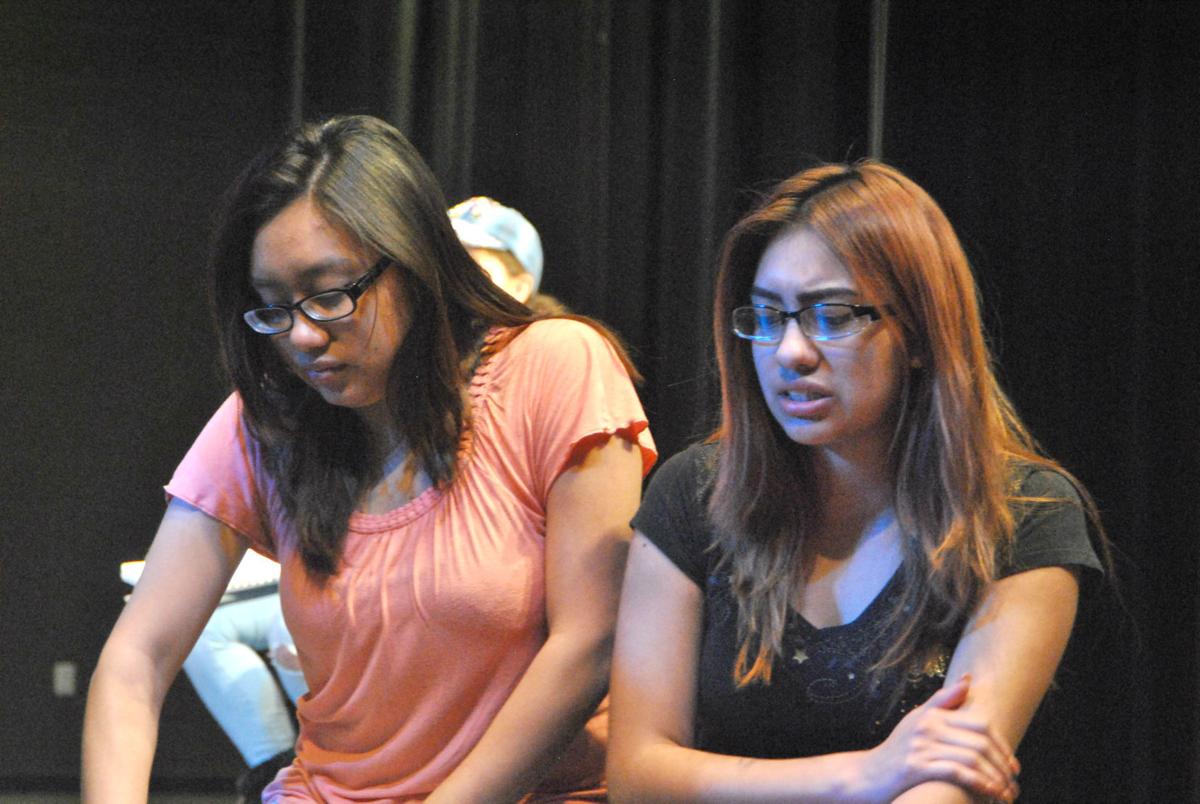 Two Northfield High School students in the cast of the 2015 Latino and Friends Play Festival work through a moment about domestic violence. EL Teacher Jennifer Lompart started the play several years ago, as a motivation for a struggling student. (Northfield News file photo)

Jennifer Lompart poses with a model horse and several framed pictures taken by her Latino students at Northfield High School over the years. Lompart finished in the top 10 for the 2015 Minnesota Teacher of the Year, honoring her service to the English Learner and Latino populations. (Philip Weyhe/Northfield News)

Two Northfield High School students in the cast of the 2015 Latino and Friends Play Festival work through a moment about domestic violence. EL Teacher Jennifer Lompart started the play several years ago, as a motivation for a struggling student. (Northfield News file photo)

Upon reaching the Minnesota Teacher of the Year top 10 for 2015, Northfield High School’s Jennifer Lompart was more interested in what it meant for her students than for herself.

“I think it was nice for my students to know people are paying attention to their education and what’s happening in the classroom,” she said. “This is their place.”

That kind of attitude is what inspired Northfield teachers and administrators to recommend Lompart for the award. Her resume, which includes 15 years of English Learner teaching and the creation of Northfield’s Latino Play Festival, got her into the top 10.

What’s most important to her students, though, is the work she’s been doing every school day for over a decade. She offers various levels of English Learner courses, as well as liberal arts. Whatever the class, she works to make all students feel included and encouraged. Lompart is a teacher, who connects with students inside and outside the classroom.

“She was a very supportive teacher. She had patience. She understood,” said recent Northfield graduate Stephanie Garcia. “When I was a freshman, I had some family problems and it got worse over time, and she knew how to help me. She was right on board. She was the only teacher I would speak to about anything.”

Originally from Cannon Falls, Lompart, 44, moved to Northfield in 2001. She graduated from high school in her home city in 1989 before attending St. Cloud State University for two years.

Then she lived in Italy for four years. She spent one year at the University of Bologna and the other three years training and competing with horses.

In truth, her time in Italy served as a separation from her real life in the United States. Though she loved being in the country, she never felt like she’d stay there forever.

“Learning a new language (Italian) is like going back to your childhood, because everything is new again,” Lompart said. “That’s how I felt in Italy. I was unsure of myself, but it was exciting.”

She came back to take classes at the University of Minnesota, where she eventually picked up bachelor’s and master’s degrees, in addition to a dual Spanish and K-12 EL teacher’s license.

While at the university, she took up a job at Mayslack’s Bar in Minneapolis. She said the bar probably taught her more about life than even her experiences in other countries. At that job, she encountered a variety of people from the working class who she knew little about.

“I think I learned that you don’t know who someone is until you learn their story,” she said. “I hope that’s transferred into my life today as a teacher. It really transformed my ideas and philosophy about digging into someone’s past before judging them. “

Lompart eventually took a job as a teaching assistant at the U of M and finally realized her passion lied there.

Lompart took her current job in Northfield in 2003. She knew from the start that she wanted to work with English Learners.

“The immigrants and their sons and daughters, their stories just fascinate me,” she said. “How bad does it have to be to leave your homeland? The idea of packing everything up and leaving everything behind, friends and families, is just phenomenal to me.”

Lompart took that interest in other people’s lives and utilized it in her classroom. She created an environment where students could not only learn together, but could feel like they had an extra set of hands guiding them.

While some see the lack of English speaking skills for many immigrants as a fault, Lompart sees an opportunity. These students have the chance to be fluent in two (or more) languages and two (or more) cultures.

“It’s hard when students come here and their Spanish is almost seen as a hindrance. It’s hard for students to combat that feeling of being Latino and believing they can’t do better. They’re actually so lucky, and they need to transfer what they knew from their other country to here,” she explained.

In 2009, a student named Juan Carlos was in a constant battle with Lompart. He promised her he would turn things around if she offered an acting class. She said “I can’t. I have no theater background.” He replied by stating that was the deal.

So Lompart found a way. She brought in her mom, Linda Henderson, who has a theater teaching background. They wrote a script together and started the Latino Play Festival, now known as the Latino and Friends Play Festival.

Each year, students are able to take a class, in which they learn to write, act and generally put a play together. Most importantly, though, Lompart said they talk. The high schoolers are able to take the biggest worries, problems and issues in their life and bring it to the forefront. If they’re comfortable with it, their scenarios could be acted out in the play.

“I think it’s so much bigger, because we’re telling some of their stories,” Lompart said. “We talk about abuse, alcoholism, immigration, sexual violence.”

The annual festival shouldn’t define Lompart’s teaching legacy, but rather exemplify it. When she steps in the classroom to teach, she is also prepared to learn.

“You realize there is no one right way to do things or live your life,” she said. “There are always people doing it different.”

The Latino and Friends Play Festival is annual event put on by students from Northfield High School, led by Jennifer Lompart. The festival features plays, acted out by students, about real life stories and situations.

"It gives them a voice," Lompart said. "It shows them that art has power. They’re thrilled [that] people are in the audience. That people in Northfield want to come and see their stories."