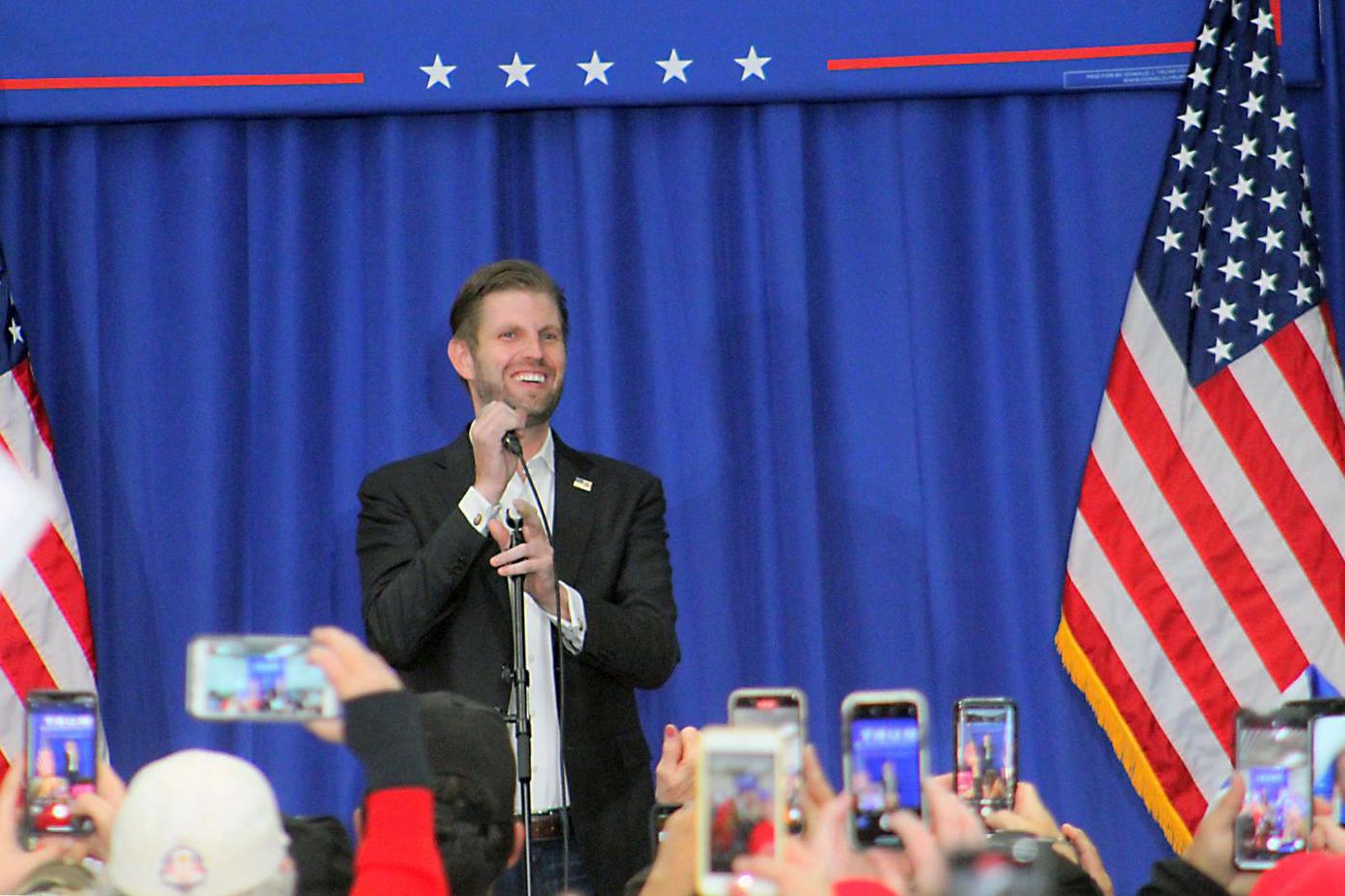 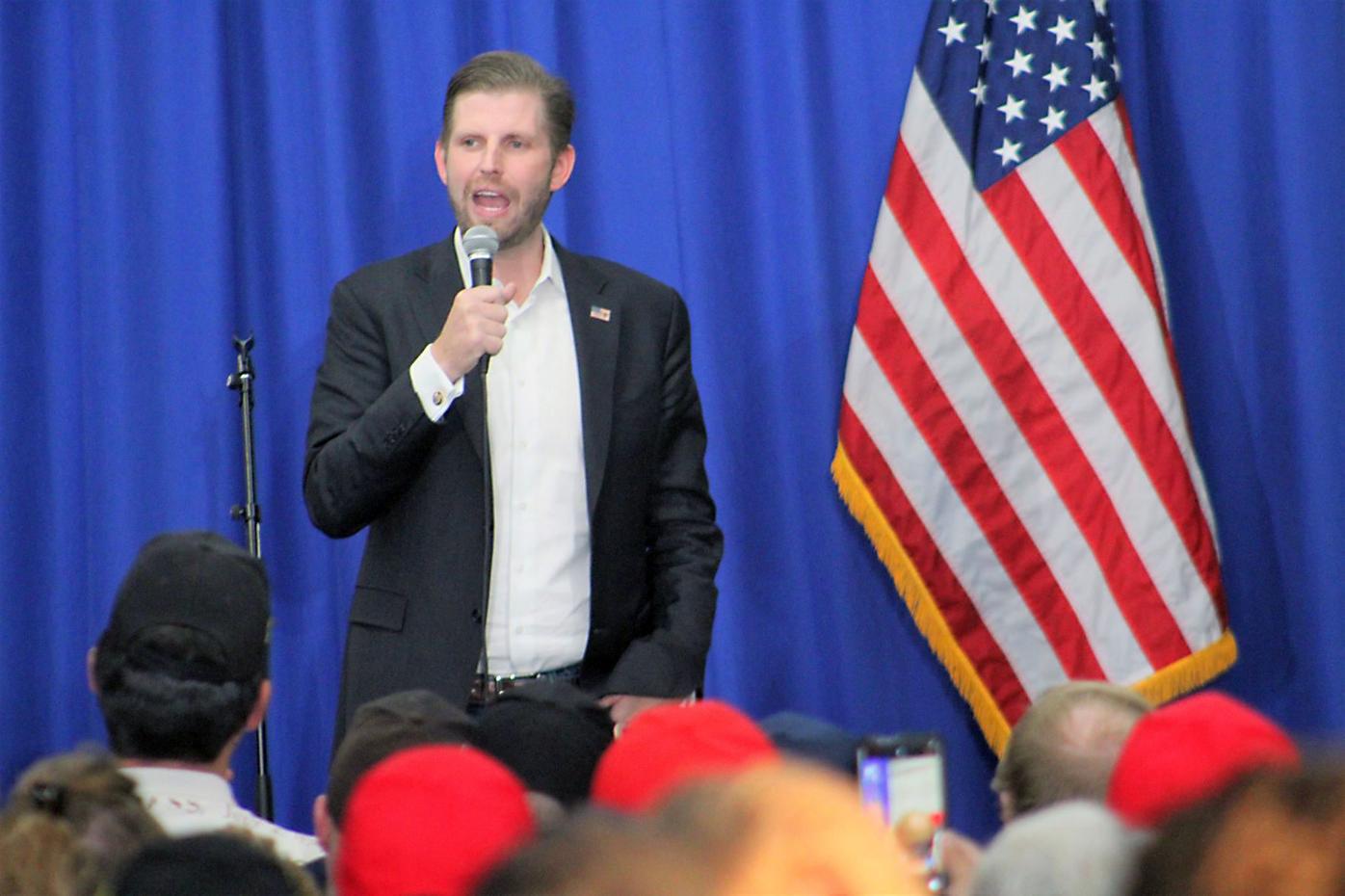 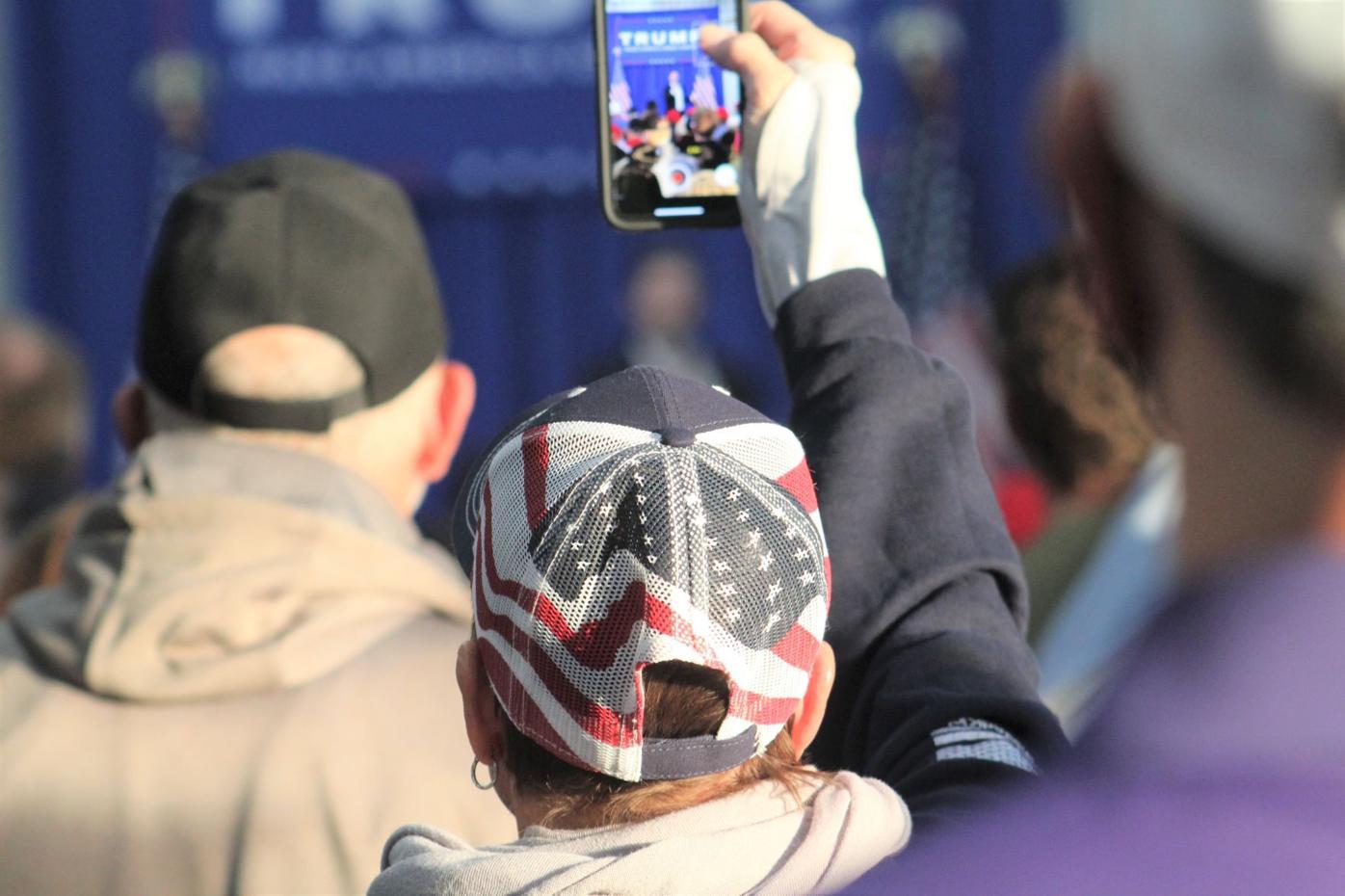 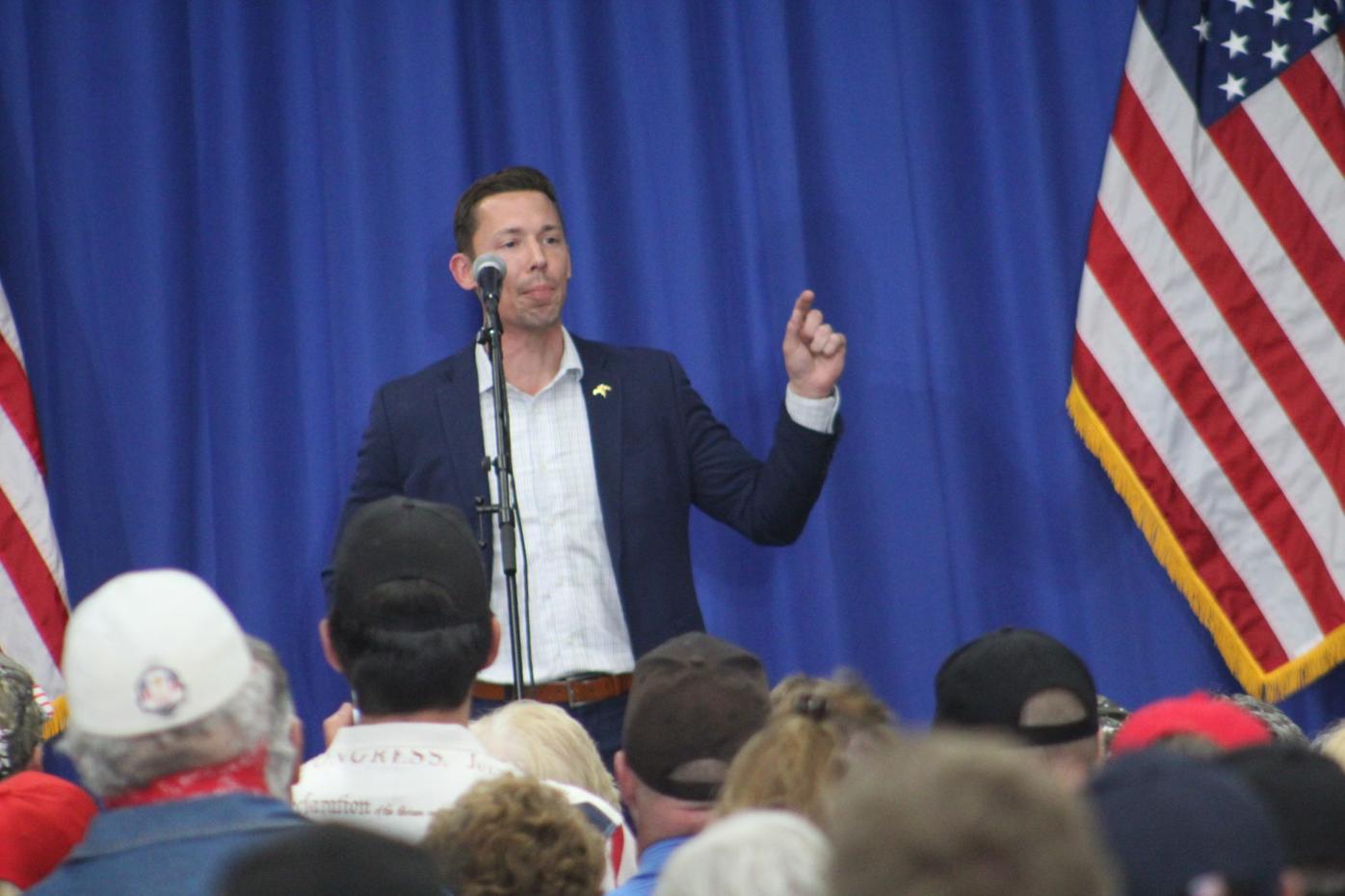 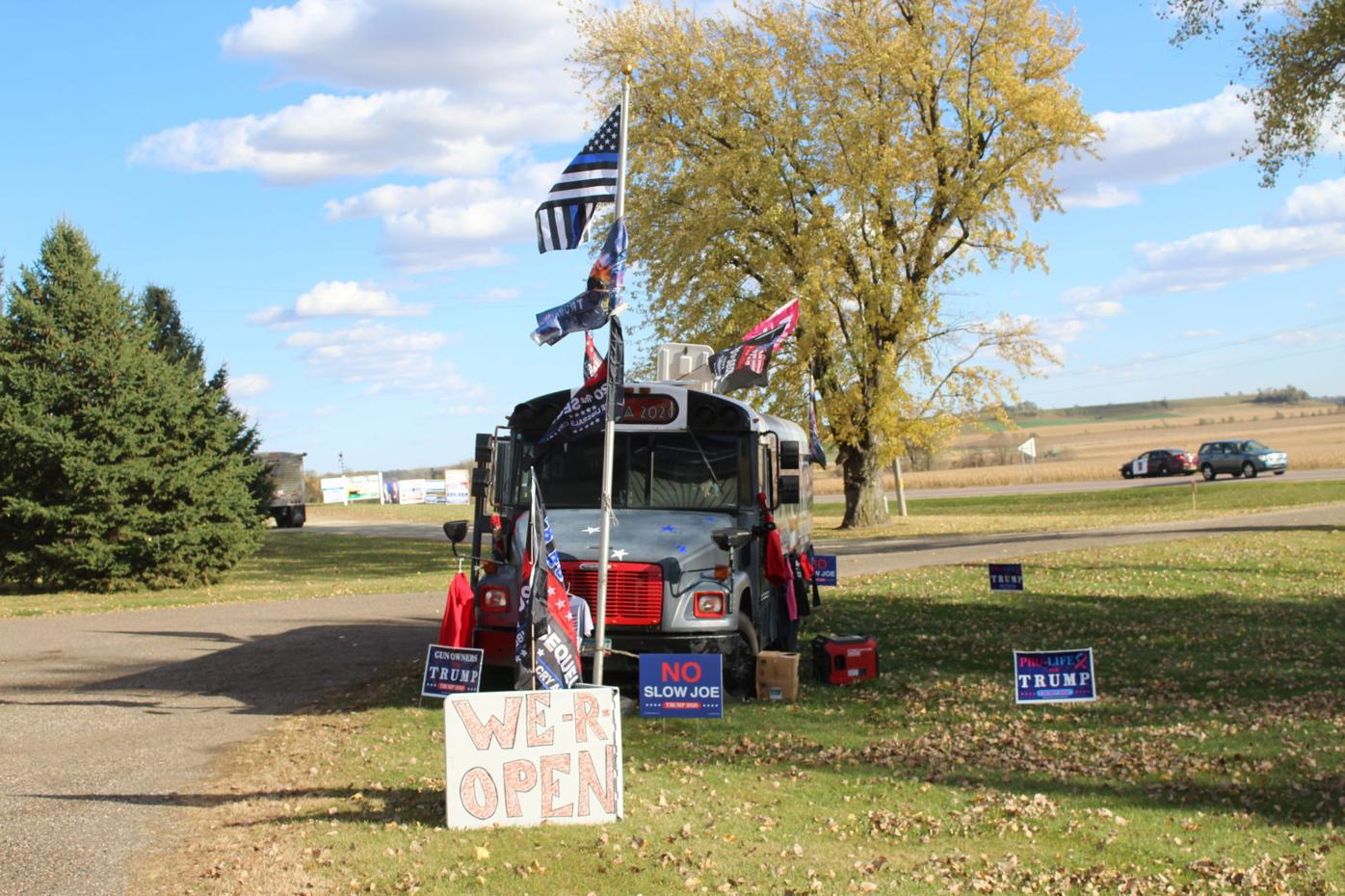 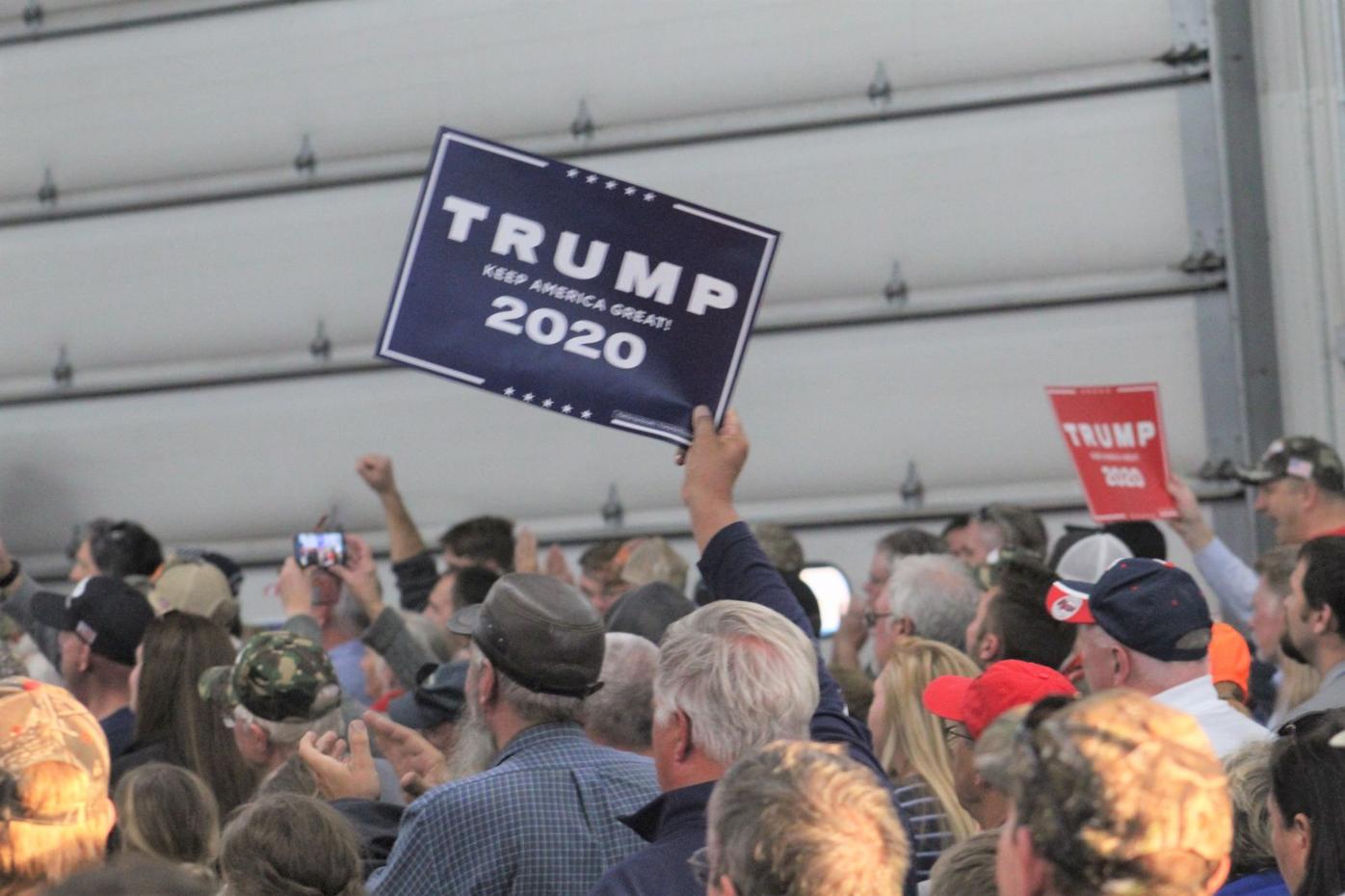 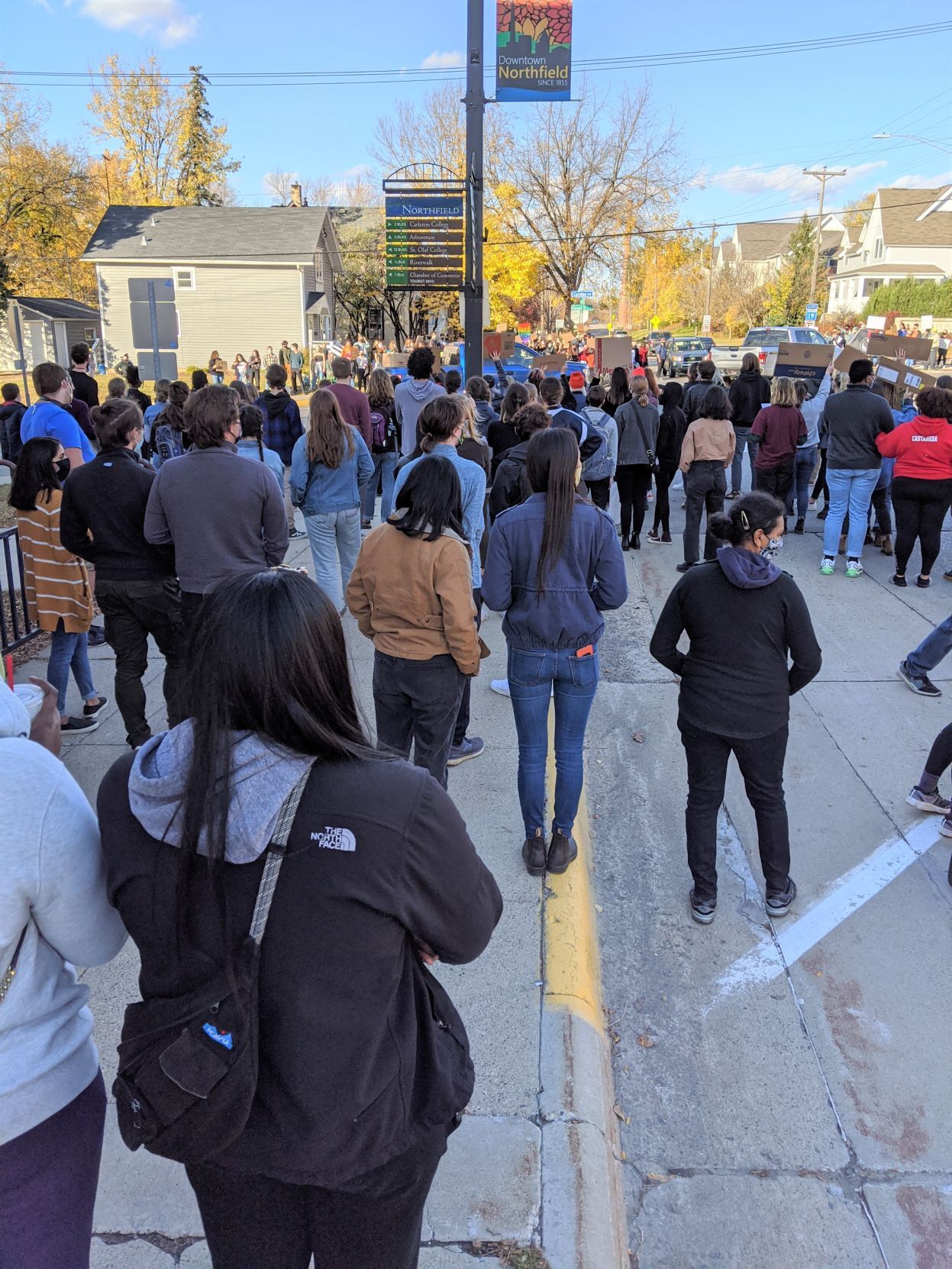 A sizable crowd of counter-protestors gathered Oct. 13 in downtown Northfield to express their disapproval of Donald Trump. (Photo courtesy of Barbara Vaile)

A sizable crowd of counter-protestors gathered Oct. 13 in downtown Northfield to express their disapproval of Donald Trump. (Photo courtesy of Barbara Vaile)

President Trump’s middle son, Eric, derided Democratic party leaders on a number of issues and praised his father’s accomplishments during an Oct. 13 speech to a few hundred supporters in rural Northfield.

Trump’s visit to Felton Farms came exactly three weeks before the Nov. 3 general election pitting Donald Trump against Democrat Joe Biden. Several times during his visit the 37-year-old businessman portrayed Republicans and Democrats as having different views of society. He said Republicans support the nuclear family structure and God. He also chided the decision made by some athletes to kneel for the national anthem to protest racial injustice and the opposition of some to the inclusion of the words “under God” in the Pledge of Allegiance.

“It was David versus Goliath,” Eric said.

Trump successfully energized the crowd a number of times in his address. He said the U.S. had “the strongest military in the world,” a statement met with chants of “Four more years!” He then spoke of the work his father has done to improve the lives of veterans and called for quick, efficient military operations to prevent long conflicts such as the 2001 invasion of Afghanistan. “USA! USA!” the crowd cheered.

Eric Trump praised his father for following through on his promise to move the U.S. embassy to Jerusalem and recent peace deals he said will foster harmony among nations. He attributed a decrease in illegal immigration and human trafficking to the Trump Administration and said it had constructed 360 miles of border wall fencing, more than the 220 planned.

While Eric Trumps statement is accurate, a fact check last month by USA Today reported that while over 300 miles of wall have been built since Trump took office, only 5 miles are new.

Trump briefly touched on the COVID-19 pandemic, criticizing the decision of some state leaders to deem liquor stores essential while limiting capacity for church services. Many of those in attendance did not wear masks.

Trump said Biden has not drawn the crowds indicative of a person with much support. He also took issue with what he said is media bias favoring Biden, the candidate’s reluctance to attend in-person rallies and his gaffes.

“He won’t leave his basement,” Eric said of the former vice president. “He doesn’t know where he is going.”

“Is this really the best and the brightest of the far left?” he added. Perhaps his most cutting comment directed toward Biden, however, was his pejorative comment that the former vice president had been in politics for 47 years.

“What the hell do we have to show for it?” he asked.

Trump extolled law enforcement officers attending the rally and attempted to tie Biden to calls from some progressive leaders to either cut Minneapolis Police Department funding or abolish the entire department. He also brought up Ilhan Omar, the progressive Minnesota congresswoman who has drawn both extensive support and controversy for past statements. Upon hearing her name, the crowd booed.

Another progressive policy Trump linked Biden to was Medicare for All, a plan he said would eliminate 180 million private health care accounts. Biden hasn’t expressed approval of the plan. He also derided the Affordable Care Act, legislation he called “the worst” and lauded his father for using a most-favored-customer clause in an attempt to lower prescription drug prices in the U.S.

President Trump has long promised a replacement for the ACA, but despite support for a lawsuit before the Supreme Court seeking to overturn the legislation, he has yet to produce a concrete plan.

Trump chided Biden for proposing a tax increase if he is elected. According to the Tax Policy Center, Biden’s plans call for increasing taxes by $4 trillion over 10 years, “with nearly all the revenue coming from corporations and the highest-income 1% of taxpayers.”

Trump spoke of social media companies’ bias toward conservatives like his father. He described Judge Amy Coney Barrett, who is in the middle of a Supreme Court nomination process that will likely result in her being named a justice, as “a tough cookie” who will help protect the Second Amendment and religious liberty. Trump criticized Democrats for what he said is their support of packing the Supreme Court and Biden’s refusal to take a stance on the issue.

Before the rally, Faribault resident Deb Voorhees, a member of the Women for Trump organization, said she voted for the president in 2016 and planned to do so again this year. To her, Trump represents the values she agrees with and has eased the division she said was in place during the Obama administration. She also chided Democrats for what she deemed as their failure to work with Trump on his Supreme Court nominees and COVID-19 relief measures.

Fellow rallygoer Jeremy Robinson, who described himself as a former “lifelong Democrat” who voted for former president Barack Obama, said he supported Trump in 2016 because he had become disillusioned with existing free trade policies and that the Democratic party has become overrun by billionaires.

“I was glad that he took the time to talk to us,” Robinson said of Trump’s visit.

Trump’s visit drew approximately two dozen protestors who set up camp across the street from the farm. Another group planned to gather in Northfield’s Bridge Square to oppose his appearance.

In a statement issued before the rally, DFL Party Chair Ken Martin said Trump’s visit was made “in an attempt to distract from his father’s failures to support our state’s family farmers these last four years.”

“(President) Trump has been no friend to farmers and has enacted policies that set them up to fail,” Martin said. “His failed trade war with China wreaked havoc on industries across the country and had disastrous ripple effects for communities, small businesses and families who rely on the agriculture economy to put food on the table and keep their small businesses afloat.”

“The best thing we can do in 2020 to support our farmers is vote Trump out and elect Joe Biden, Kamala Harris and Democrats up and down the ticket,” he said.

“Farmers are among the hardest workers in the state,” he said. “And they just want to earn a fair living in the marketplace. Trump’s administration has done real economic harm to producers and their communities by kicking the legs out from under the ethanol industry for three plus years.”