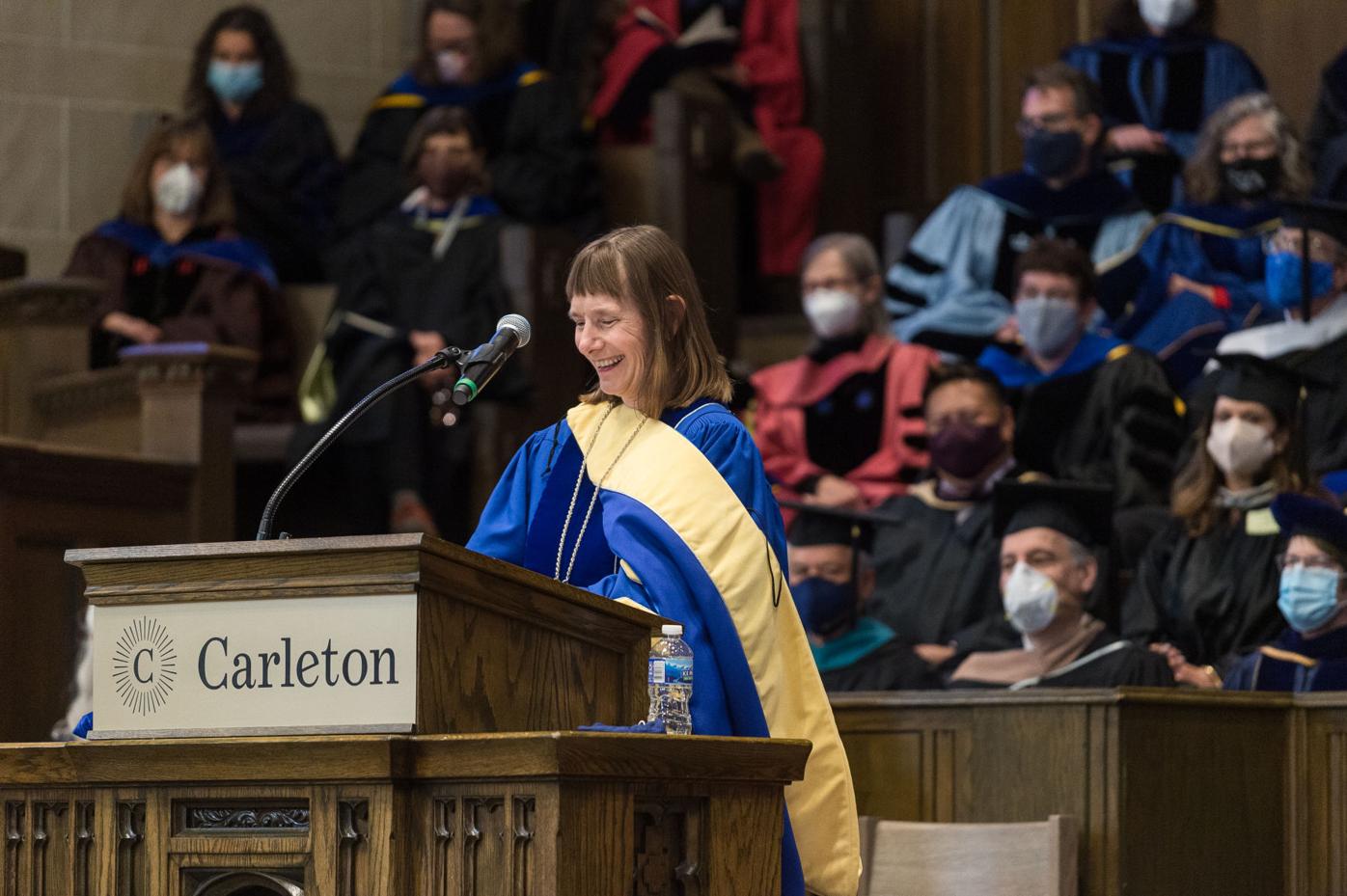 Alison Byerly, shown here during her Oct. 16 inauguration in Skinner Memorial Chapel at Carleton College, was familiar with the school even before her presidency. She's a Carleton mom. (Photo courtesy of Dan Iverson/Carleton College) 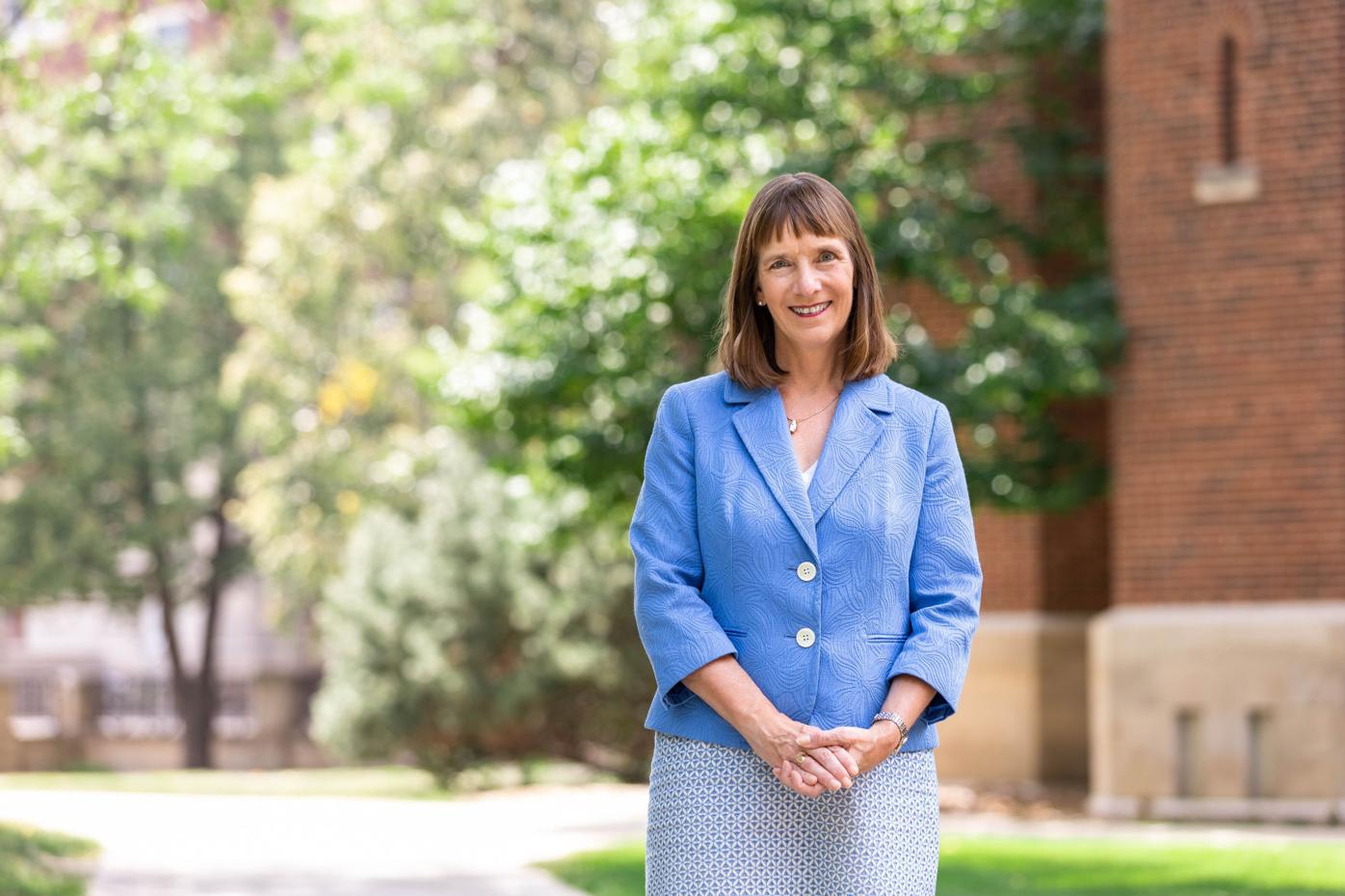 Alison R. Byerly was inaugurated as Carleton College’s 12th president this fall. She is the first female to lead the private college. (Photo courtesy of Hannah Pietrick/Carleton College)

Alison Byerly, shown here during her Oct. 16 inauguration in Skinner Memorial Chapel at Carleton College, was familiar with the school even before her presidency. She's a Carleton mom. (Photo courtesy of Dan Iverson/Carleton College)

Alison R. Byerly was inaugurated as Carleton College’s 12th president this fall. She is the first female to lead the private college. (Photo courtesy of Hannah Pietrick/Carleton College)

Earlier this fall, Alison Byerly began her tenure as the 12th president of Carleton College. She succeeds Steven Poskanzer, who led Northfield’s east-side college for 11 years.

Byerly, the first woman to fill the presidential role since Carleton’s 1866 founding, was inaugurated in ceremonial fashion at Skinner Memorial Chapel Oct. 16.

What kind of an impression has Northfield made on this new leader in her early months on the job?

By all accounts, a favorable one.

In a recent interview with the Northfield News, Byerly shared observations and information to help Northfielders become better acquainted with her.

Getting to know you

Although Byerly has spent a fair portion of her life in Pennsylvania — her mother was a professor at Ursinus College in Collegeville, Pa., she earned master’s and doctorate degrees in English at the University of Pennsylvania and prior to her Carleton appointment, she was president of Lafayette College in Easton, Pa., for eight years — neither Northfield nor small-town life is completely unfamiliar to her.

Byerly’s daughter graduated from Carleton in 2015 so Byerly and her husband, Steve Jensen, had visited Northfield on numerous occasions.

“It is truly the case we had heard of Northfield before our daughter started college,” said Byerly, who also has a young adult son.

“Our Middlebury friend, Jan Albers, has family here and she always spoke so warmly of her time in Northfield and at Carleton — and that’s one of the reasons our daughter applied here,” she continued.

“It has felt wonderful to be here and has been an easy transition in part because we understood even from a distance quite a bit about the area. Northfield itself, as well as Carleton, was a strong draw.”

Prior to serving as president at Lafayette College, Byerly spent 24 years at Middlebury College in Vermont, advancing there from teaching English with a focus on Victorian literature to serving as provost and, later, executive vice president.

Byerly and her husband, a serious birdwatcher, both love the outdoors and have already been taking advantage of Carleton’s Arboretum.

“There are beautiful trails in the Arb,” said Byerly, “and I’ve heard many members of the Carleton and Northfield communities say the Arb was well-traveled for fresh air and walks during the pandemic shutdown.

“I enjoy it as a place to run; it’s lovely and a relaxing way to end the day.”

The newest residents of 217 Union St. are finding Nutting House a perfect fit.

“Living in Nutting House is such a privilege,” said Byerly of the traditional Carleton presidential residence.

“It’s a beautiful old home with lovely woodwork, and since my field is Victorian literature — and my husband collects antique brass microscopes — my books and his collection look lovely on the built-ins there.”

Byerly took advantage of the house’s Victorian vibes to do some spooky seasonal decorating and host a Halloween open house for Carleton students.

“We probably had about 200 students stop at Nutting House on Halloween night, and it was a great way to engage students in a casual, low-impact way.”

Byerly and Jensen have been sampling “all of the restaurants” when time allows, and Byerly said she attended a few Northfield Chamber of Commerce events and other local activities earlier in the fall.

“I’ve been warmly welcomed by the Northfield community,” said Byerly.

“I certainly feel very supported by the officials and offices I’ve spoken with, and it’s good for the town to have two strong colleges, and good for the colleges as well,” she added.

“Carleton wouldn’t be as successful a college if people didn’t enjoy the town. Both Carleton and St. Olaf benefit from having a town people like to visit, and the town in turn benefits from us.”

Another aspect of “home” is recognizing those who first called it that, and Byerly says there has been increased interest on the Carleton campus of late in practicing indigenous land acknowledgment and working with the nearby Prairie Island community.

“Learning about this dimension of Minnesota culture and history is one of the things I’ve most enjoyed,” said Byerly.

“The Native American communities are integral to the state’s history, and we’re establishing a connection with Prairie Island, which is nice.

“Although we have a relatively small population of Native American students, that connection is a wonderful resource and we hope to be good partners with them in a variety of ways.”

Byerly firmly believes there is plenty of room in the town of cows and contentment for two colleges.

“It’s good for the town to have two strong colleges,” said Byerly.

In fact, Byerly and St. Olaf President David Anderson first crossed paths when they were both college provosts — she at Middlebury and he at Denison University.

“We knew each other previously as professional colleagues, and I was in touch with him about Northfield when my daughter was deciding to attend college here,” said Byerly.

“We will have a period of overlap before his retirement, and I hope that will be a productive period,” she continued.

“It’s nice having another partner here.”

For instance, both Byerly and Poskanzer before her talked often with Anderson and other St. Olaf officials about the colleges’ COVID protocols.

“I enjoy the sense of collegiality and friendly rivalry in this two-college town,” said Byerly, “and we know that many Carleton employees have family members, friends or colleagues at St. Olaf so it’s in our best interest to avoid conflict and be aware of how each other operates.

“It simply adds to the vibrancy of the town to have two institutions here.”

Byerly believes Carleton’s Center for Community and Civic Engagement, directed by Sinda Nichols, is an asset that benefits the greater community.

“Carleton students are very active in a series of programs with local organizations, and in some cases, there is an academic component involving either research or volunteerism,” said Byerly.

“In talking with students, I hear that one of the things they like is that the college isn’t completely separate from the town but blends into the neighborhood.”

Nichols confirms Byerly’s view that college students are interested in finding ways to contribute to the Northfield community, mentioning their involvement in organizations such as the Community Action Center, area schools and the Northfield Area Family YMCA, among others.

In one example of the win-win that arises from students’ community engagement, Nichols cited the YMCA’s CEO Krista Danner, who credited a Carleton student with creating a bilingual monthly newsletter during the summer of 2020 that enhanced the Y’s connection and communication with its patrons.

“Our students don’t want to be seen just as people who come in for a few months each year and then leave,” said Byerly, pointing to a desire among students to be civically engaged.

Byerly also sees the Weitz Center — Northfield’s former middle school — as an important touchpoint between Carleton and the community.

“With the history of the building and its placement, and the kind of programming we do there, it’s a gateway to the community and a way to connect the college to the town,” said Byerly, listing concerts, movies, art exhibits, lectures and more occurring there.

“The Weitz Center is an important cultural resource for the entire community.”

In early November, Carleton hosted an evening informational session at the Weitz Center to share with nearby Northfielders the college’s residential housing plan involving a multi-year replacement of and renovation to college housing in the neighborhood surrounding Carleton.

“Between 60 and 70 people attended within an hour and a half,” said Byerly. “We want the community to be well-informed, and we’re trying to be good neighbors in communicating our plans.”

With her birds-eye view of the Weitz Center, Byerly expects to simply observe the fabled Thanksgiving morning Northfield Rotary Club’s Turkey Trot, which is scheduled to begin near Nutting House.

“We plan to be spectators this year,” said Byerly, “but we would love to participate in the future.”