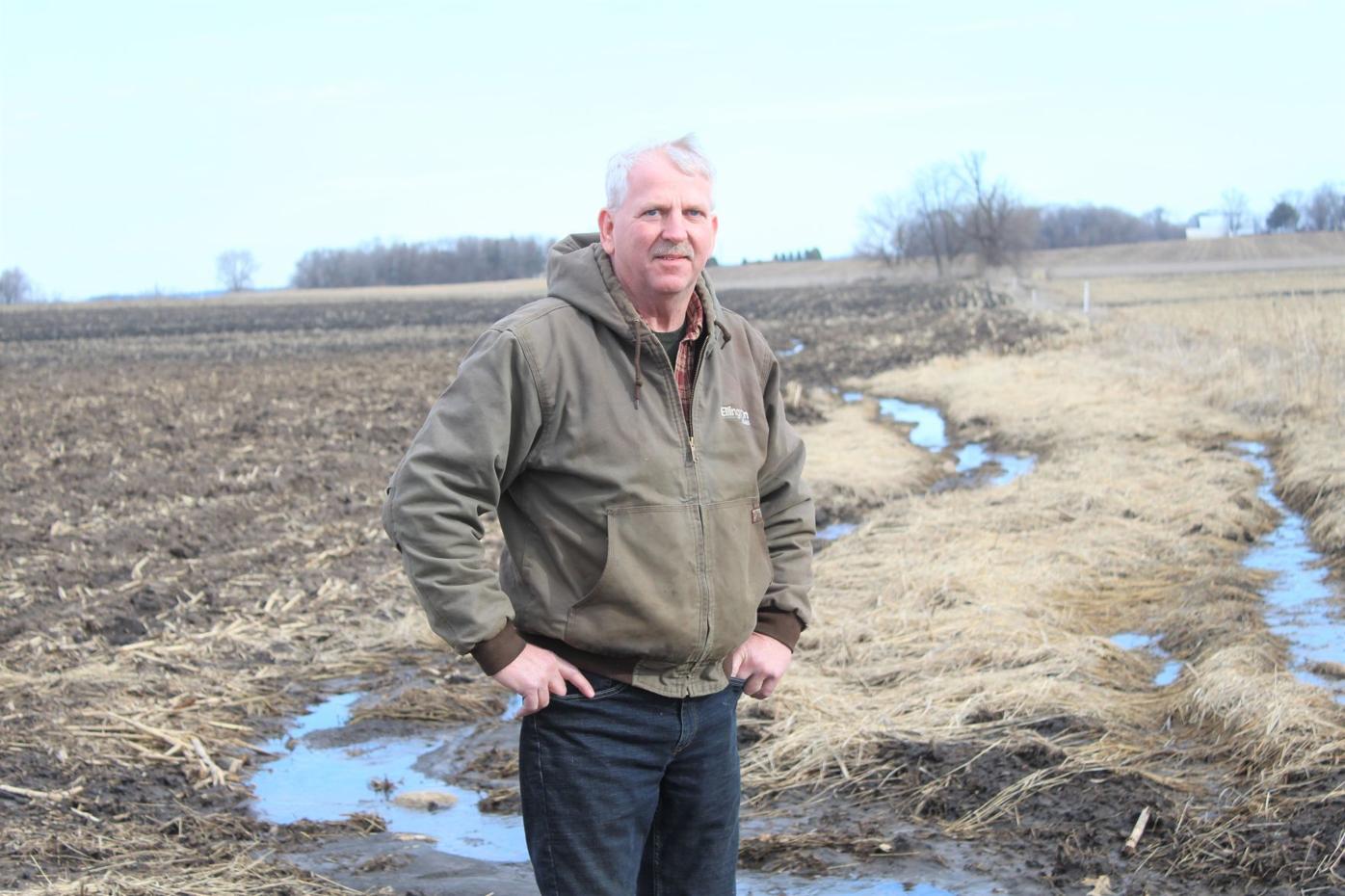 Matt Langer stands to the west of the current solar farm. Langer, his brother, Greg, and fellow farmer Tom Sorem take issue with the runoff that comes from the site, shown in the background. Langer said he doesn’t want compensation. He just wants the problem to be fixed. (Sam Wilmes/Northfield News) 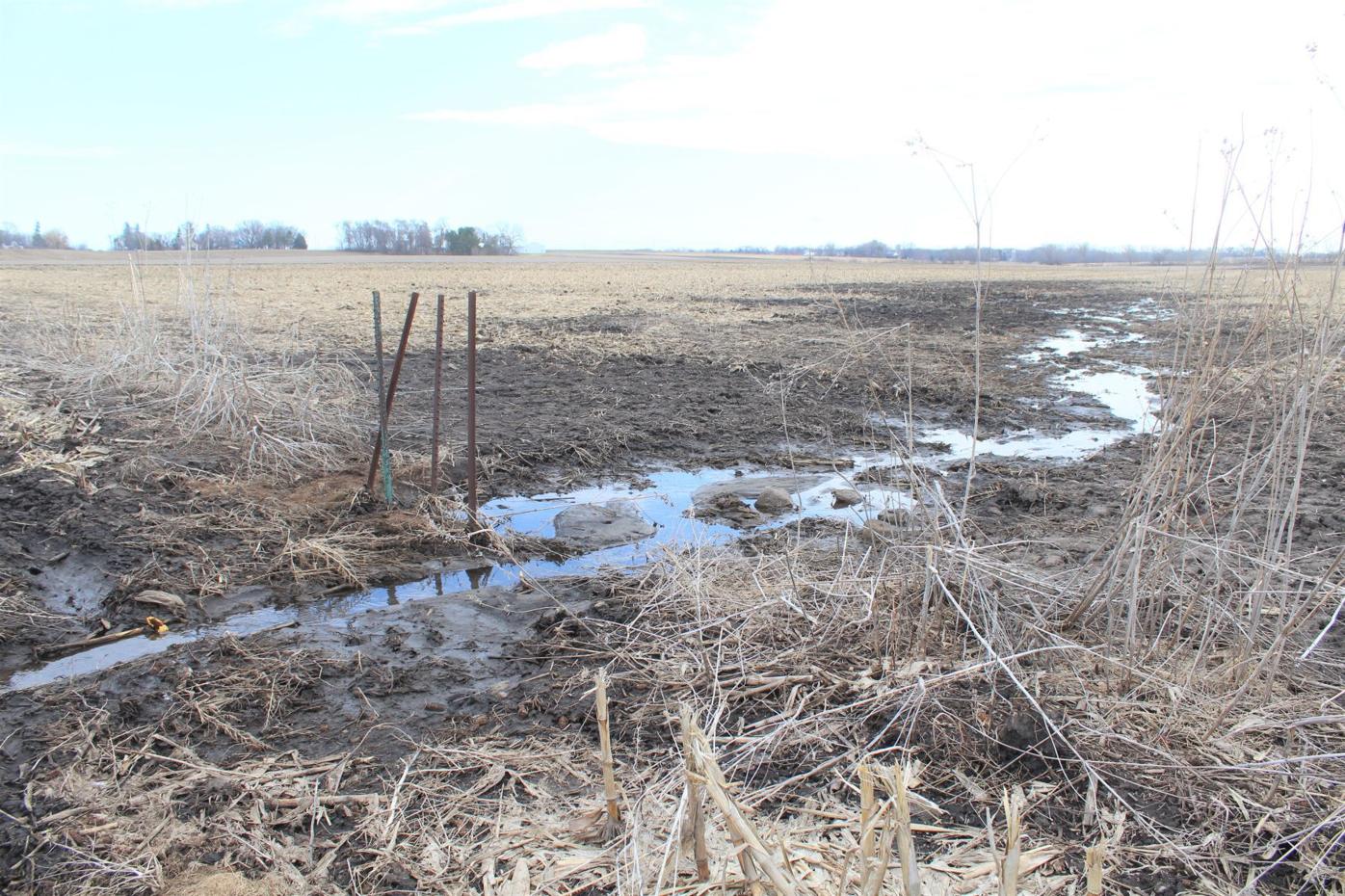 The runoff flows between farmland belonging to the Sorems (left) and the Langers. The rods in the middle of the picture constitute the property line. (Sam Wilmes/Northfield News)

Matt Langer stands to the west of the current solar farm. Langer, his brother, Greg, and fellow farmer Tom Sorem take issue with the runoff that comes from the site, shown in the background. Langer said he doesn’t want compensation. He just wants the problem to be fixed. (Sam Wilmes/Northfield News)

The runoff flows between farmland belonging to the Sorems (left) and the Langers. The rods in the middle of the picture constitute the property line. (Sam Wilmes/Northfield News)

Since the solar farm’s construction in 2017, they’ve requested the city, the companies that have owned the solar farm and St. Olaf College — which owns the land on which the solar farm sits — to fix the runoff issue. Problems still persist.

As of earlier this month, water saturated approximately a half dozen acres of farmland belonging to the Sorems and Langers north of the solar farm, forcing the farmers to drive around the area, hampering any work in that area. A steady stream of water had been flowing from the Sorems’ farm to the Langers.

When the two families got wind that a second solar farm would be developed next to the original following the Northfield City Council’s approval, they called on the city at a Feb. 18 public hearing to fix the first solar farm’s runoff problem.

But no fix came, they say, and the City Council unanimously approved the second solar farm March 17.

“It’s a huge problem,” Tom Sorem said of the runoff. Although the 5 acres of runoff from the first site is relatively small, it is still unacceptable, he added.

“It’s a major inconvenience, and it’s not something we should have to deal with,” he said. “The problem’s been there since the project started.”

The solar farm is owned by Berkshire Hathaway Energy Renewables LLC, which purchased the solar farm from developer Geronimo Energy in 2015 before it was in use.

BHE General Manager Neal Poteet said when the company became aware of the runoff issue, it had surveyors confirm that the site, including a stormwater pond, culverts and outlets, had been constructed in accordance with plans and permits. Poteet said he reviewed the concerns with Northfield Engineering Manager Sean Simonson and St. Olaf Director of Facilities Kevin Larson.

BHE received permission to install rock at the discharge area to diffuse runoff. However, this year’s melting showed the fix had been inadequate, so BHE decided to plug the outlet with a 4-inch concealed drain last month.

To Poteet, the plug seems to be making a difference. He said the area underneath the plug was a little damp last week but water wasn’t flowing. He noted the plug was in place during construction, speculating it could have been removed by a contractor.

Despite the runoff problems, Poteet said the site design has taken into account storm events and snowfall, but noted officials are evaluating ways to enhance the stormwater system after a long stretch of extraordinarily wet years. Such options include rebuilding the site’s stormwater infrastructure or adding a drain tile to remove water from the discharge area.

Langer said the drainage system the solar farm uses has proven insufficient to keep water from flowing to neighboring fields. To him, three large culverts being level with the floor of the containment area at the solar farm is increasing runoff.

Bennett said the project is in compliance with city codes relating to safeguarding property and controlling or eliminating storm water pollution.

Langer said although Bennett is probably right, those regulations don’t cover farmland, emphasizing the landowners aren’t looking to sue, they just want runoff to be eliminated. To him, the cost of fixing the problem is low, while the goodwill in doing so would be substantial.

The city has been in meetings with BHE to try to fix the problem, though no new firm plans have been made as of yet, Bennett said earlier this month. He added runoff was an issue prior to the solar farm’s construction, something the farmers dispute, and that grass growing underneath and between the solar farm’s panels could be causing additional runoff.

The city has not tested the solar farm’s contribution to runoff, Bennett said.

Larson also attributed much of the problem to heavier rainfall over the past few years and the fact that water flowed in the direction of the two farms even prior to the solar farm’s construction — a statement Sorem and the Langers deny.

The second solar farm’s construction is slated to be completed this year.

Officials believe the solar farms nicely intertwine with the city’s commitment to developing more solar energy as it seeks to transition to carbon neutrality by 2040.

Farmer Matt Langer said he is in favor of solar and wind energy, but that it needs to be done responsibly. He also emphasized they are not seeking compensation, just looking for the problem to be rectified.

He said promises made by BHE to look into the issue haven’t always been met.

“They’ll make you happy the day they’re out here, but nothing pans out afterwards,” Matt said.

"It's a major inconvenience, and it's not something we should have to deal with," Sorem said.