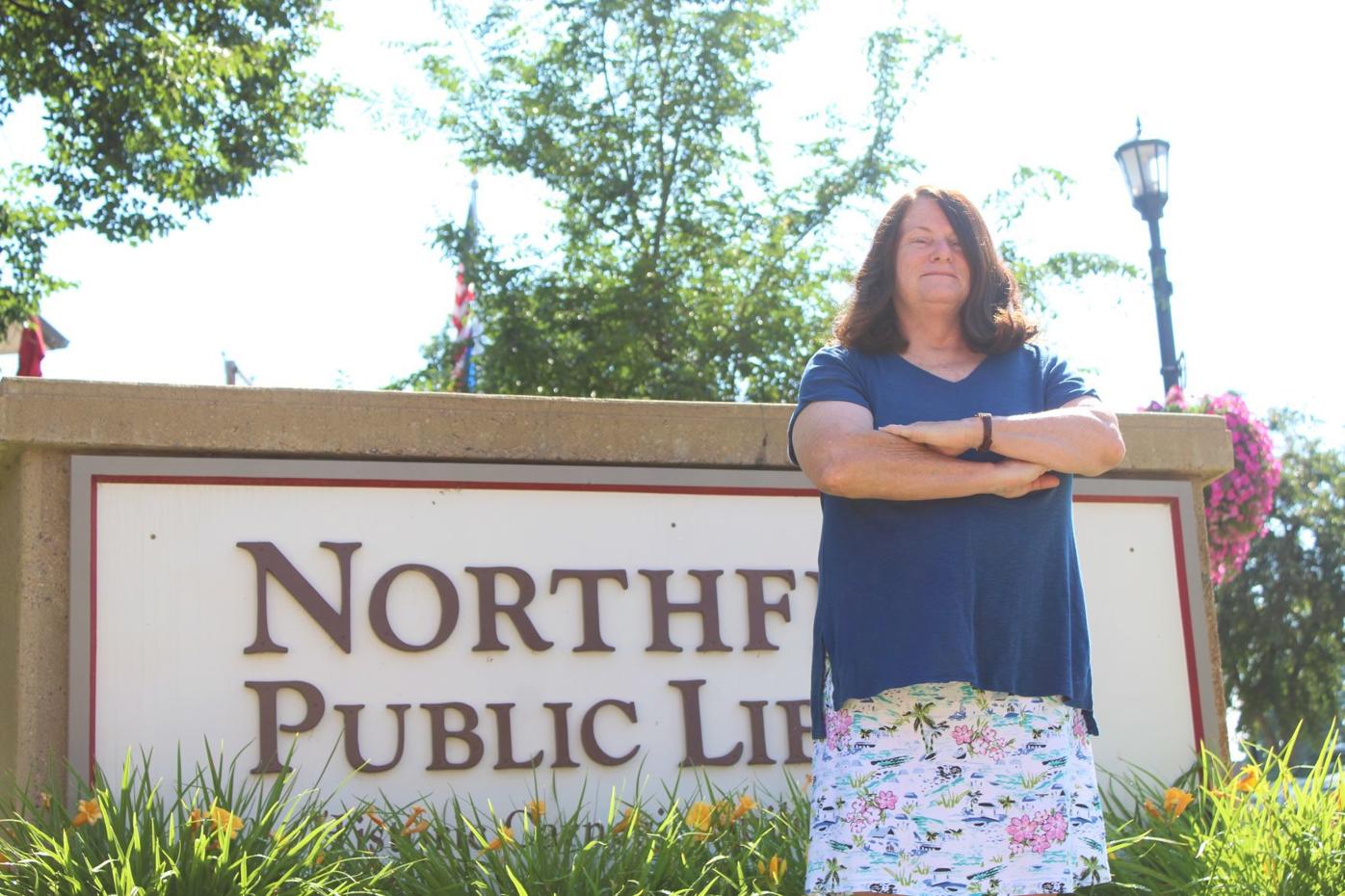 Longtime Northfield Public Library Resource Librarian Joan Ennis recently retired from her position due at least in part to concerns surrounding working in the public during a pandemic. Despite that, Ennis stepped away with the knowledge that the library services industry remains strong and that she helped better the lives of her patrons over a more than three-decade career in the community. (Sam Wilmes/Northfield News) 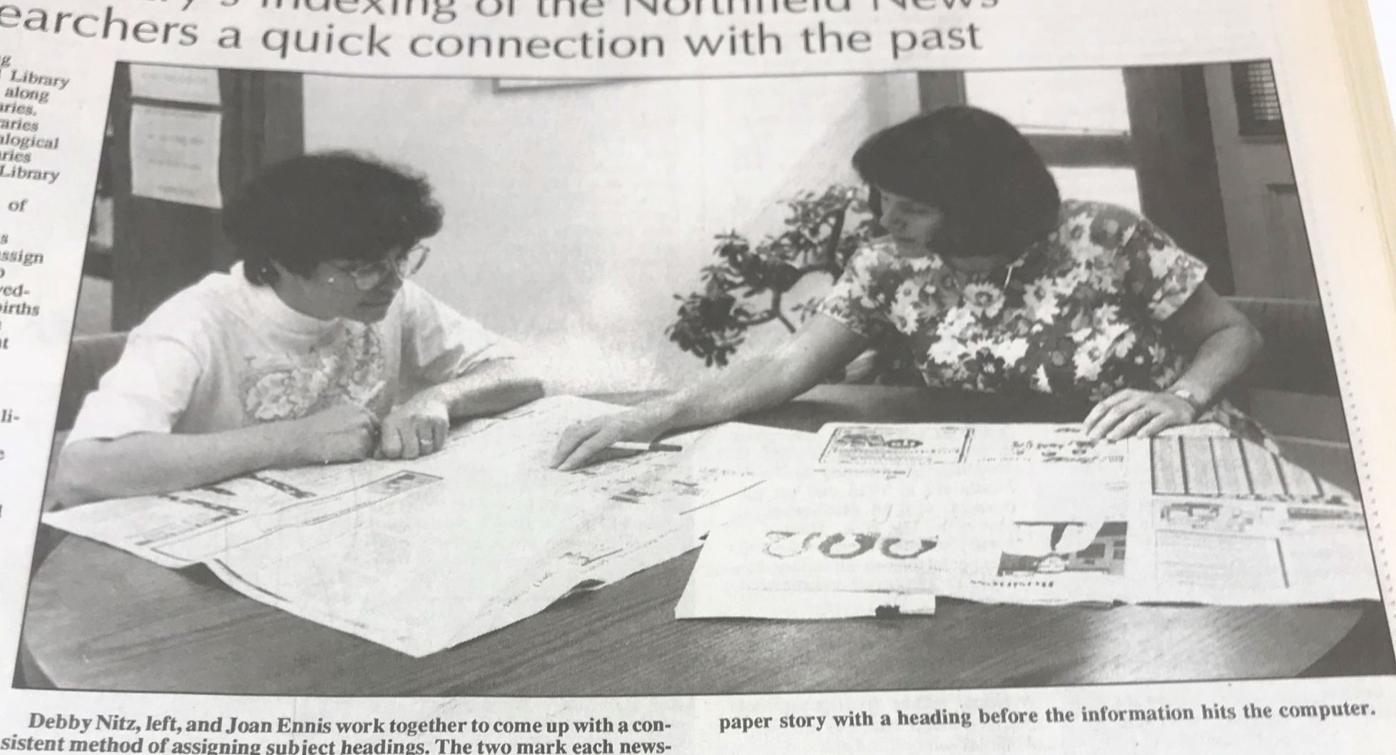 Ennis is shown in a picture from the Aug. 13, 1993 edition of the Northfield News indexing the newspaper, a task she worked on for many years. (Archived photo)

Longtime Northfield Public Library Resource Librarian Joan Ennis recently retired from her position due at least in part to concerns surrounding working in the public during a pandemic. Despite that, Ennis stepped away with the knowledge that the library services industry remains strong and that she helped better the lives of her patrons over a more than three-decade career in the community. (Sam Wilmes/Northfield News)

Ennis is shown in a picture from the Aug. 13, 1993 edition of the Northfield News indexing the newspaper, a task she worked on for many years. (Archived photo)

Under a hot Thursday morning sun in Bridge Square, Northfielder Joan Ennis described her decades-long career in the library services industry and the COVID-19 concerns that caused her to end her tenure with Northfield Public Library somewhat prematurely.

Although the pandemic and the changing library industry are reminders of how much things have changed in libraries over her 31½-year career in Northfield, there are two things she knows that still bring a smile to her face: Libraries will continue to play an important role in the coming decades and the thousands of patrons she helped as a reference librarian over her tenure.

A California native, Ennis’ career began as an 18-year-old student at the University of California Los Angeles, the college where she earned a Bachelor of Arts degree in English literature. She was hired to work at the reference desk for the government documents office, a position typically reserved for library school or graduate students.

The couple moved to Northfield in 1986 while Ennis cared for their growing family. When she was initially hired by Northfield Public Library in February 1989, Ennis was a library assistant, covering Sundays and on a fill-in basis. That would change a few months later, however, when a co-worker went on maternity leave and Ennis was hired as a reference librarian.

A consistent presence in a changing industry

Since then, Ennis has answered questions, fulfilled public requests and led reader advisories. Her later work consisted of a lot of local history- and genealogy-related tasks. In addition, she helped the library work with schools on academic-related matters.

One of her favorite aspects of being a reference librarian was helping patrons. In the past, she purchased fiction and non-fiction books for the library and conducted adult activities. She started a book group on her own 15 years ago that she still plans to run voluntarily, and two writing groups. Last winter she held a craft day where local businesses showed crafts.

“It’s nice to have free activities and teach people about things that they might be interested in,” Ennis said.

“The day is never boring, because there’s always something different. People used to look more for answers before the internet, now they just want to know where they can get information. That’s a generalization. They still want answers, but they can find it once you get them to the right place.”

She has accumulated memories over the years that remind her of why she enjoyed being a reference librarian. Some of those include children who were 11 and 12 who were interested in subjects traditionally seen as beyond their understanding. One sought to build their own violin while another was trying to learn about quantum physics.

“It’s when you see people feeling confident to even ask about something that is maybe beyond their ability to totally understand, but they are learning something,” Ennis said.

Perhaps the memory that sticks out to her most is when a man who was in his 30s who hadn’t yet learned to use a computer came to the library looking to apply for a job. The next week, she saw the person at a grocery store. The man had found employment by applying on the internet.

Approximately two years ago, Ennis took her granddaughter, who lives in Northfield, to a friend’s birthday party. Someone who had visited the library eight years ago remembered her helping her find materials to study for the citizenship exam, and become a citizen.

“I have always remembered that encounter, and was thankful that I could move her life forward,” she said.

Friend Sarah Dennett has known Ennis for 30 years. Dennett said her friend is “always professional and goes the extra mile to help people.”

“She’s always loved working with the public,” Dennett said. “I think she’s made connections with kids over all the years she’s been there. She’s been a wonderful resource in so many ways for the whole community.”

Hope for the future

Although a lot of tasks libraries helped patrons with are now online, Northfield has an e-library, complete with e-books and audiobooks, the video streaming service Kanopy, Tumblebooks and an online math program. Despite those changes, Ennis knows people still like to browse through information and a public library is a gathering spot where patrons read newspapers and interact with each other.

“It’s a community center,” she said. “Anyone can come to the library. Anyone can use the library. Customer service is really a high priority, and we really try to meet the needs of the people who come.”

Ennis also volunteers at Northfield Public Schools. When possible again, she plans to volunteer once more for the district.

“I plan to continue doing that and getting involved with the community, but I have to wait until it’s safe,” she said.

“I plan to stay here. I have a lot of friends and this is my home now.”

“I plan to stay here. I have a lot of friends and this is my home now,” Dennis said.