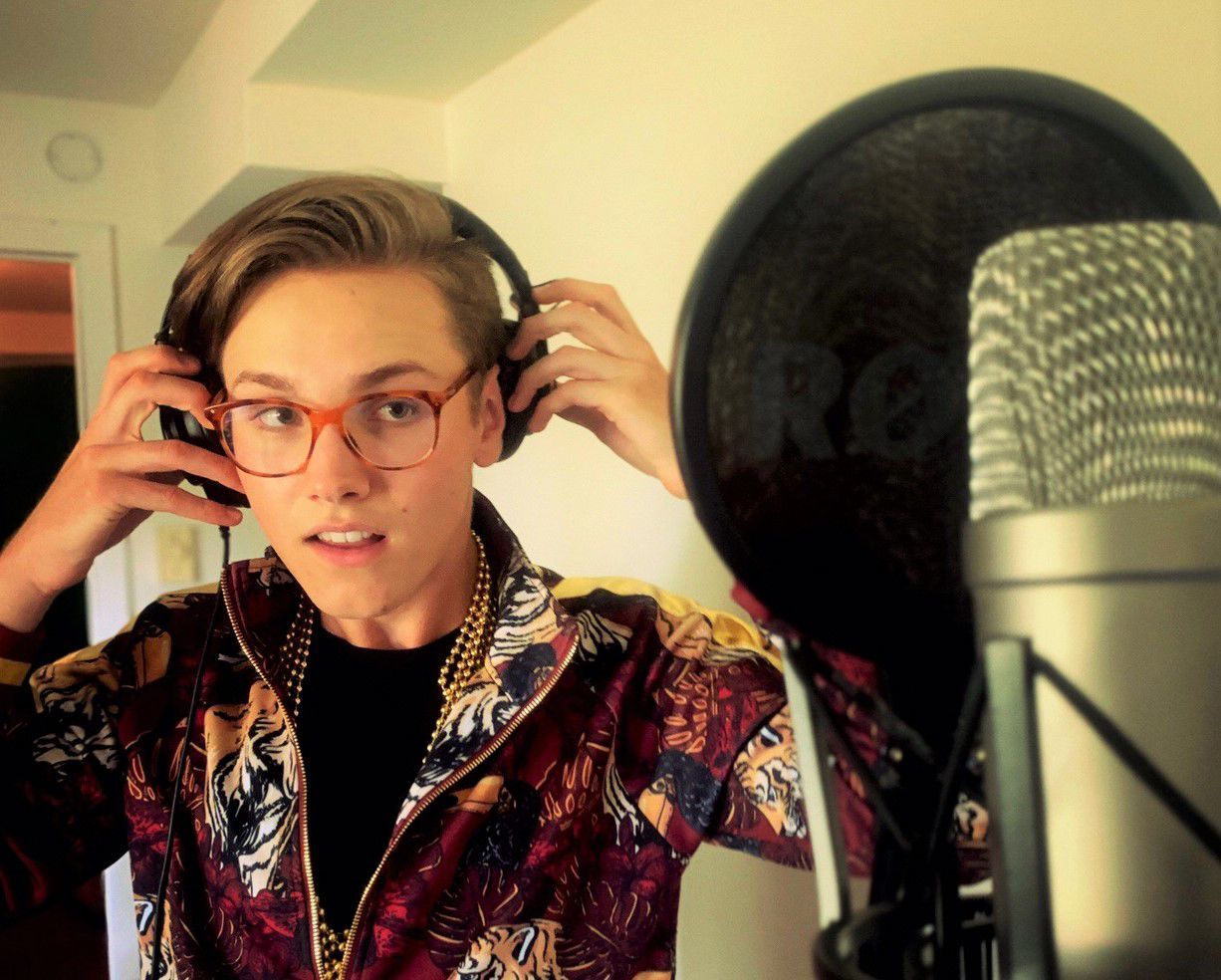 Robby Swenson has produced an album, “Anorexia,” based on his experience suffering from the debilitating eating disorder. Swenson said he hopes to inspire others to also overcome the condition while showing the broader public the struggle the disorder entails. (Photo courtesy of Robby Swenson) 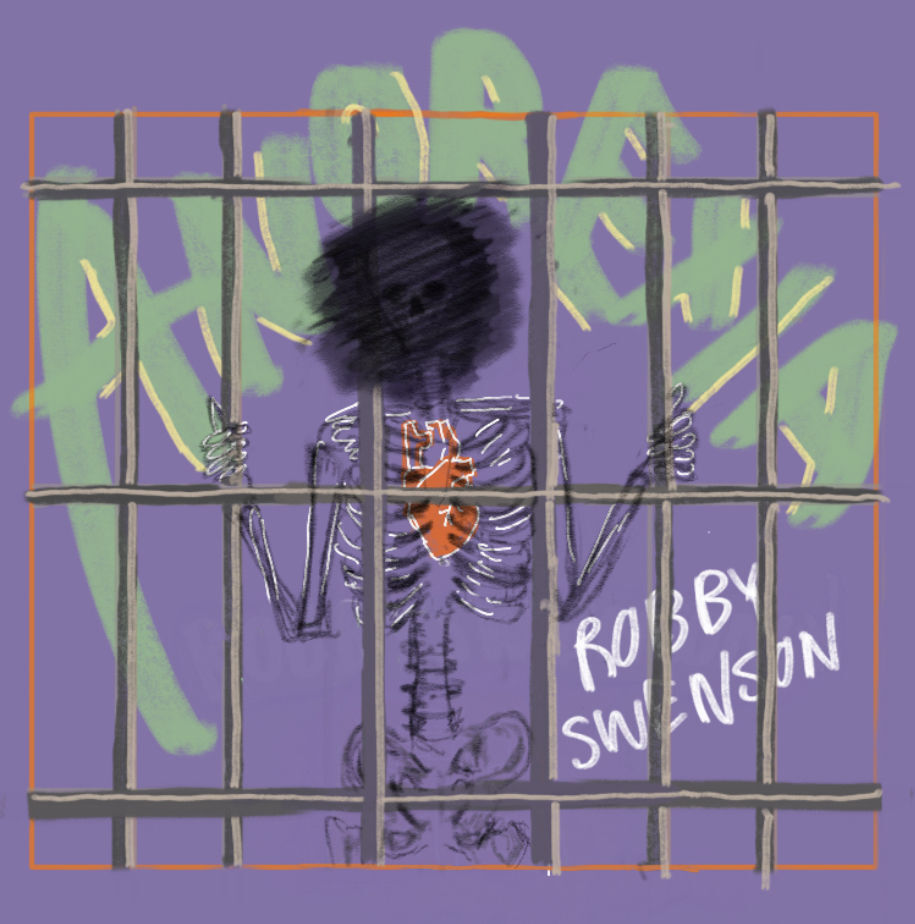 The album cover of “Anorexia” includes an image of a skeleton attempting to escape a jail cell through the bars. Swenson said the album’s lesson is the person learns to escape the prison by going over the top. (Photo courtesy of Robby Swenson)

Robby Swenson has produced an album, “Anorexia,” based on his experience suffering from the debilitating eating disorder. Swenson said he hopes to inspire others to also overcome the condition while showing the broader public the struggle the disorder entails. (Photo courtesy of Robby Swenson)

The album cover of “Anorexia” includes an image of a skeleton attempting to escape a jail cell through the bars. Swenson said the album’s lesson is the person learns to escape the prison by going over the top. (Photo courtesy of Robby Swenson)

Robby Swenson was in a downward spiral.

The then-Northfield High School junior was battling anorexia, an eating disorder that caused him to lose 30 pounds. The condition left him physically weak, constantly hungry, and in search of an elusive sense of self-esteem that, no matter how hard he tried, seemed to evade his grasp.

As his condition worsened and those around him began to grow concerned for his well-being, Swenson started to climb out of the depths of the disorder through therapy and the development of positive self-talk and is now a senior with goals of entering the world of music.

The lessons Swenson learned during the grueling 12-month stretch are included in an album he released Jan. 15, “Anorexia,” and are intended to help others who might be struggling from anorexia and other eating disorders.

As a freshman and sophomore, Swenson saw older students who were writing their own music and taking advanced classes. He was never much into sports and instead sought fulfillment through theater and music. Those differences made him doubt his physical conditioning and worsened his preexisting uncertainty in his own looks and abilities.

“I’ve always been insecure,” he said.

By the end of his sophomore year, Swenson started running to assuage those insecurities. He also changed his diet, not out of a desire to improve his health but to ensure that he was thin enough to be accepted. The changes, considered hallmark early warning signs of an eating disorder, only worsened. He would sometimes go to bed hungry. At one point, at 6 feet, 1 inches tall he only weighed 160 pounds.

As his physical condition worsened, his mother said she was concerned that he would die if he continued to starve himself. Still, the compulsive regulation of his caloric intake continued, resulting in ongoing torment he attributes partially to TV commercials showing people who are in extraordinary physical condition and offering similar results for people who subscribe to those lifestyles.

Still in the midst of his eating disorder, Swenson began to realize the toll anorexia had taken on others who suffered from the condition by seeing pictures of people close to death, images that were “very terrifying” to the teenager.

Swenson spoke with representatives of The Emily Program, a nationally recognized organization serving people with eating disorders. They told him he needed to change his habits, including eating more to become healthy — the opposite approach he had taken when he was suffering from anorexia.

“That was really interesting,” he said.

That advice made Swenson realize that he had to do what he had previously feared most: Gain weight and ease the control he had previously placed on himself by severely restricting his food intake. Gaining that awareness made him remember what life was like before the onset of the eating disorder, his passion for making music and participation in choir. Soon, Swenson developed a different habit, one that included self-acceptance and positive self-talk. However, he acknowledged that cycle can be tough to break because anorexics tend to believe they can accomplish their goals only if they continue losing weight.

As his life improved, Swenson began to understand the scope of what he had been through and wanted to help people who are suffering from anorexia. He had never seen personal accounts of the condition prior to his experience with the eating disorder and noticed a societal reluctance to discuss the topic. That realization sparked his interest in writing his second album while helping people overcome the debilitating impacts of anorexia.

The album’s progression is intended to serve as a progression through his ordeal. It starts with a reference to unfairness, a comparison between his experience with the eating disorder and being in a jail cell and trying to lose enough weight to fit through the bars. The first eight or nine songs are intended to be hard-hitting, to show listeners the toll anorexia plays on those suffering from the disorder. The album’s message then includes the realization that Swenson can remove himself from the jail by climbing over the bars instead of trying to starve himself to make it through. One track includes a female voice, Swenson’s friend Ella Andrew.

The album is available on Spotify, Apple Music and on other major music streaming platforms. It’s free on SoundCloud. Swanson advises anyone interesting in giving it a listen to search “Robby Swenson” when looking for his work on streaming platforms.

Swenson is not approaching the album as a money-making endeavor. Instead, he wants it to open listeners’ minds to a message of self-love and acceptance. He wants them to look inside themselves and understand that the compulsive behavior eating disorders entail never improves the underlying insecurity, despite the deceptive sense of immediate promise the regimentation offers.

Meg Tomonari, Swenson’s friend and the album cover’s designer, noted its colors were chosen based on what she imagined while listening to the album. The heart within the skeleton is intended to show a stream of consciousness, while the skeleton is intended to reflect the self-feeling of the person suffering. She considers “Anorexia” to have a mix of upbeat and relaxed beats. Tomonari, who has also struggled with a positive body image during high school, said her friend’s work was effective.

“It really does kind of show that opposite effect of having an eating disorder,” she said.

Northfield High School senior Ella Andrew, who also collaborated with Swenson on three songs, said she’s “really excited to see the finished product.” Both Andrew and Swenson write music, and Swenson approached her with the idea.

“We’ve had a collaborative relationship in terms of music for a while,” Andrew said.

Swenson intends to attend a small liberal arts school in the area and is considering a career as either a choir director or music producer. He finds joy in producing music. His musical inspirations include Tyler the Creator, rap artists Kendrick Lamar and N.W.A, and bands like Origami Angel.

“It’s just such a communal thing,” he said.

According to the National Institute of Mental Health, anorexia “is characterized by a significant and persistent reduction in food intake leading to extremely low body weight in the context of age, sex and physical health; a relentless pursuit of thinness; a distortion of body image and intense fear of gaining weight; and extremely disturbed eating behavior.” According to the National Comorbidity Survey Replication, the median age of onset was 21 years old for binge eating disorder and 18 for both bulimia and anorexia.

According to the National Institute of Mental Health, the lifetime prevalence of eating disorders was 2.7%. Eating disorders were more than twice as prevalent in females (3.8%) than males (1.5%).

According to the National Association of Anorexia Nervosa and Associated Disorders, 5-10% of anorexics die within 10 years after contracting the disorder and 18-20% of anorexics die after 20 years. Anorexia nervosa reportedly has the highest death rate of any psychiatric illness. According to the association, without treatment, up to 20% of people with major eating disorders die. With treatment, that rate falls to 2-3%.

According to the National Eating Disorders Association, common signs someone is suffering from an eating disorder include: