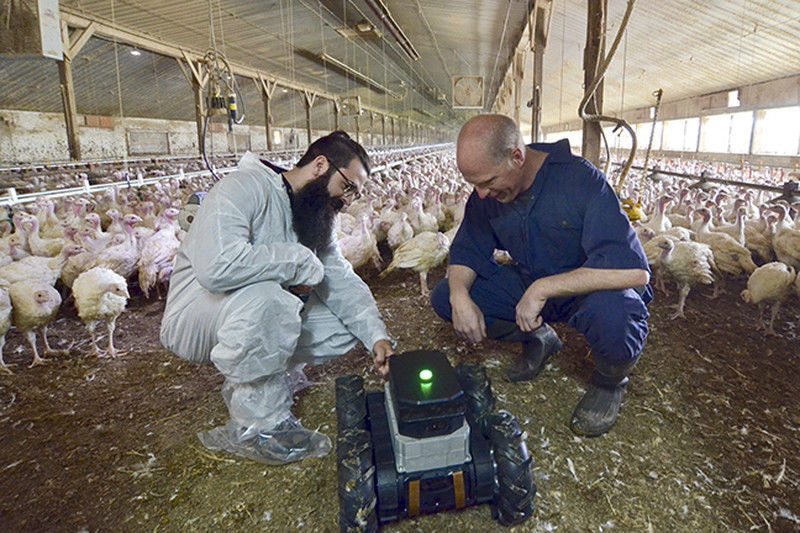 Jack Kilian is partnering with a turkey farm in Northfield to test out his autonomous robot. (Photo by Richard G. Anderson) 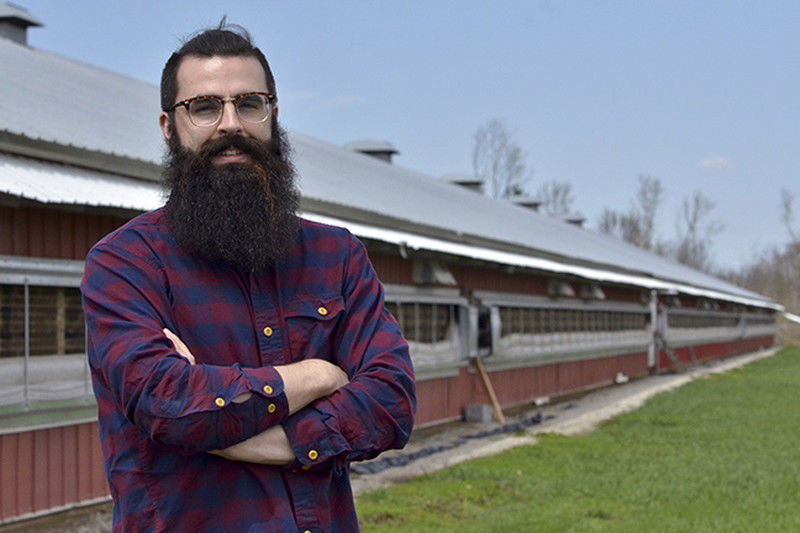 Having an interest in robotics and agriculture tech, Jack Kilian decided to combine the two. (Photo by Richard G. Anderson) 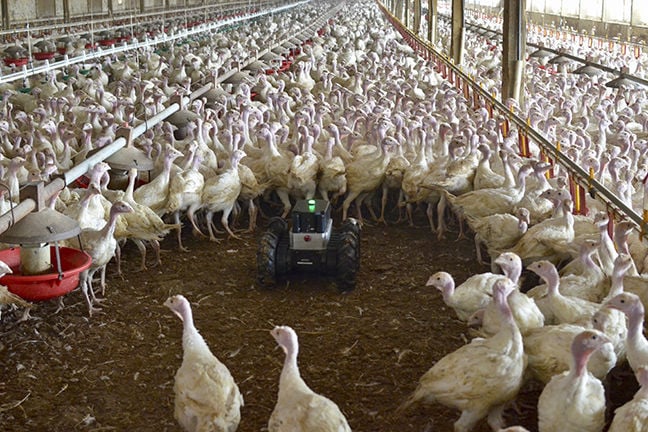 Jack Kilian is partnering with a turkey farm in Northfield to test out his autonomous robot. (Photo by Richard G. Anderson)

Having an interest in robotics and agriculture tech, Jack Kilian decided to combine the two. (Photo by Richard G. Anderson)

Minnesota turkey farmers may be getting a different kind of farmhand if Jack Kilian gets his way. The recent College of Science and Engineering at the University of Minnesota graduate has designed Poultry Patrol, an autonomous robot designed to save farmers time and muscle inside their poultry barns.

In addition to completing tasks such as turning bedding, detecting disease, and reading temperature sensors, the four-wheeled robot can measure humidity and temperature—and take video inside the barn so farmers can monitor the turkeys remotely.

Kilian, a recipient of multiple CSE scholarships, including the Lawrence and Marian Robert Scholarship and the Elmer and Betty Schwittek Scholarship, won $12,500 in January to fund the project from the Ag Tech Challenge sponsored by the innovation center Red Wing Ignite.

Poultry Patrol, however, started by chasing a different kind of bird.

While interning at Wayzata-based tech incubator Digi Labs last year, Kilian—who graduated this May with a master’s degree in electrical engineering—was hired to work on one of its startups, the Wild Goose Chaser robot. Designed to operate in backyards, the Wild Goose Chaser does just as its name suggests: drives out unwanted geese off the grass. While brainstorming other ways to use the autonomous bot, the idea for Poultry Patrol was born.

“We already had the equipment from the robot with the Wild Goose Chaser, and it seemed with some small modifications we could make it useful for this,” Kilian said. “Minnesota is the nation’s largest turkey producer, so we thought it seemed like a pretty good application.”

Often losing out to the larger chicken industry, turkey farms tend to get second-hand technology, Kilian explained. By introducing a robot farmhand, he hopes to make the poultry production process less monotonous and more efficient for turkey farmers, and eventually chicken farmers as well.

“Farming is basically the foundation of civilization, and I’ve always wanted to contribute to that,” Kilian said. “But I know my strengths are in the robotics area, so what motivated me to pursue this project is that it checked all the boxes I was interested in.”

As Kilian pointed out, farmers have chores to complete every day in every one of their turkey barns, which aren’t always in close proximity to each other. But, by using the Poultry Patrol robot, farmers would no longer have to spend time checking up on each turkey barn because the autonomous robot would do it for them.

“It’s very important because farmers struggle finding labor help,” Kilian said. “So, anything that multiplies how efficient they can be in each turkey barn is extremely valuable to them.”

After receiving funding for the project, Kilian connected with Minnesota turkey farmers through GreenSeam, an agricultural business development organization, and a trip to the Midwest Poultry Convention.

Now, he’s partnering with a turkey house in Northfield to test out Poultry Patrol on a real farm. Following preliminary testing—to make sure the robot can both travel on rough terrain and find its way around a turkey barn — Kilian and his team are in the midst of testing out different attachments, such as a tiller to turn the bedding.

Although the testing process is long, Kilian hopes they can market the robot on a larger scale within the next year.

“So far, the turkey farmers have been really happy with the robot we’ve shown them,” he said. “Hopefully, we can get some more robots going soon.”

Kilian credits both Digi Labs and his experiences at the University of Minnesota for expanding his interest in the robotics field and giving him the resources to succeed as an engineer.

“The U of M really gave me that foundation and fundamental skills and the opportunities to try out some of these things,” Kilian said. “There were numerous opportunities to work on cross-disciplinary teams, which taught me how to think about what I’m working on not just in the electrical engineering domain but how it fits into the larger scheme of things.”

Throughout his undergraduate and graduate careers in the College of Science and Engineering, Kilian managed projects in student groups like Tesla Works, where he had opportunities to apply what he learned in class.

Kilian was also part of the Solar UAV Project, a venture out of CSE computer science and engineering professor Nikolaos Papanikolopoulos’ lab and the Center for Distributed Robotics, in which students worked to build a solar-powered aircraft without human pilots on board.

“That got me really in-depth technical experience working with a very advanced team to produce some really crazy ideas,” he said.

Plus, it was through the Solar UAV Project that Kilian met the people at Digi Labs, who ended up offering him a summer internship and through that, a full-time job working in its collaborative space. Kilian said without the resources and people he’s worked with at the tech incubator, Poultry Patrol would have taken a lot longer to pull off.

After Poultry Patrol, Kilian hopes to keep working in the agriculture tech industry. He said he’s already working with the Minnesota Department of Employment and Economic Development to get broadband installed in more rural areas so that farmers can use internet in their turkey barns. And after that, the opportunities for more technological advancements will present themselves.

“There’s an endless number of things I could be working on just in agricultural robotics, so that’s going to be my focus for now,” he said. “I think there are a lot of opportunities still left unexplored.”

'It’s very important because farmers struggle finding labor help. So, anything that multiplies how efficient they can be in each turkey barn is extremely valuable to them.'