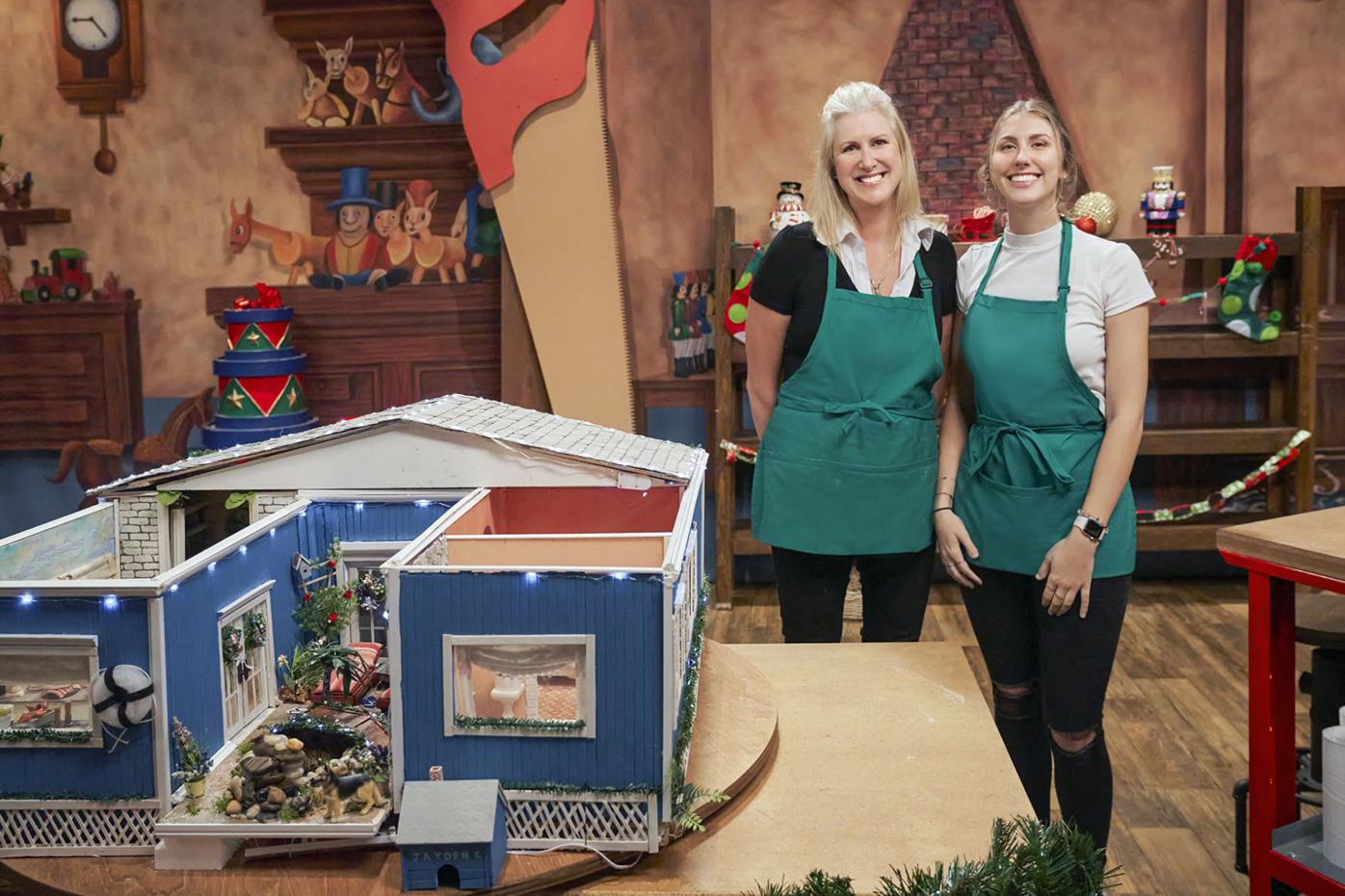 From left, Tracy and Renee Giza pose with their beach house during the Mele Kalikimaka challenge, as seen on The Biggest Little Christmas Showdown. The Northfield mother-daughter duo made their debut on the show last November. (Photo courtesy of HGTV) 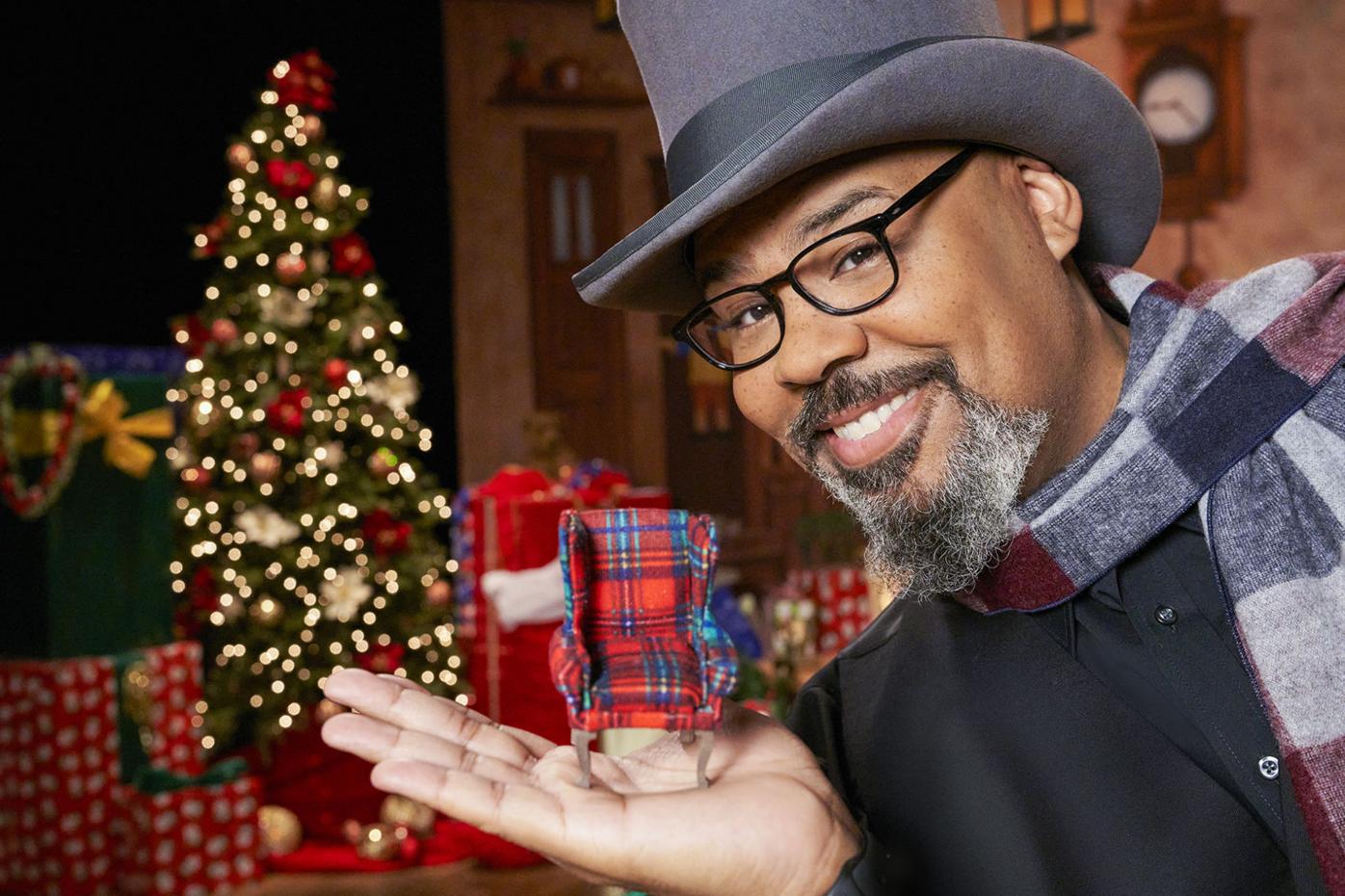 Host James Monroe Iglehart holds a tiny armchair from one of the contestant’s challenge homes, as seen on The Biggest Little Christmas Showdown. (Photo courtesy of HGTV)

From left, Tracy and Renee Giza pose with their beach house during the Mele Kalikimaka challenge, as seen on The Biggest Little Christmas Showdown. The Northfield mother-daughter duo made their debut on the show last November. (Photo courtesy of HGTV)

Host James Monroe Iglehart holds a tiny armchair from one of the contestant’s challenge homes, as seen on The Biggest Little Christmas Showdown. (Photo courtesy of HGTV)

After Tracy Giza's painting classes came to a halt earlier this year to the pandemic, she found herself thinking small; miniature even. Little did she know, that several months later it would lead her and her daughter Renee to their TV debut.

"This was a good opportunity to dive into [miniature scenes]," said Tracy of being selected for the competition. "Especially on the HGTV platform."

At 8 p.m. Friday, the Northfield mother-daughter duo appear on the premier of HGTV’s Biggest Little Christmas Showdown. The pair were selected as one of three teams, each team tasked with building a miniature Christmas house and competing to win a $50,000 grand prize. The show is hosted by Broadway actor James Monroe Iglehart and features Minneapolis native Genevieve Gorder as a guest judge.

Tracy, an artist and art instructor, applied after seeing information about the show in a group for miniature enthusiasts like herself. Tracy, who does custom painting for clients and teaches painting classes for both kids and adults, has always enjoyed dabbling into the miniatures world, decorating doll houses for her daughters and nieces when they were younger. She even created the items such as the furniture, pillows and books.

"It's become more detailed as I grew with it throughout the years," said Tracy. "[Miniatures] came as a hobby, making dollhouses and then selling them. I even incorporate them into some kids after school art classes. I've asked them to create some small miniature scenes, like coy ponds."

Friday's episode, titled "Mini Mele Kalikimaka Christmas” (Merry Christmas in Hawaiian), challenged Tracy and Renee to create island-inspired treasures from their imaginations and build the merriest mini holiday house, filled with all the tiny, festive trimmings they could imagine. Once they learned the theme, Tracy said they did a lot of research to develop what traditional Hawaiian Christmas food to create, as well as beachwear, flip flops and surfboards. Since Christmas in Hawaii looks a little different than Christmas in Minnesota, Tracy said the research helped the creative process. The house is about 4 feet wide and 4 feet long, the biggest she's made from scratch, and includes details such as books, slippers and Christmas decorations.

"I think my project turned out absolutely beautiful, I was super pleased with the results," said Tracy.

The duo had about six weeks to create the house on their own time, but no rooms could be completed before they flew to New York City for the filming, though initial filming occurred at their home in Northfield. Tracy and Renee then were flown to the Big Apple for a two-week COVID-19 quarantine before the filming the show in a midtown studio this summer.

"It was wonderful working with HGTV, they all took great care of us. The judges were really, really fantastic and the camera crew and all the people that took care of us during our studio work," said Tracy of her experience. "It was super exciting, the studio was set up beautiful for Christmas, it was like we were in Santa’s workshop."

Tracy said her background in art helped her in the competition, especially in terms confidence and positivity.

"I love color, texture and creative arts in so many different ways. I just pulled from everything I liked and everything I knew," said Tracy. "That, I think, helped me at least be confident that I can plunge into it and not be too afraid. I also just felt confident in the fact that if I don't know something, I'll be OK and I'll do the best I can."

On top of the challenge of creating a house, Tracy said they were also tasked with a mini challenge to complete in just two hours. She said it was exciting to see how she was able to think on her feet and how creative she could get with the materials on hand with the mini challenge.

Renee, a University of Minnesota student, dabbled into the miniature scenes, especially dollhouses, when she was younger. Though she doesn't create/decorate the physical structures anymore, Tracy says Renee provides useful ideas on how to tweak a certain room and suggestions on what it may need. During the competition, Tracy said it was fun to see Renee get into the creative process.

All in all, Tracy said she would absolutely take part in the show again and she encourages everybody to give it a try.

"It's a great challenge. If you love to do it in the first place, it gives you a wonderful arena," said Tracy. "I'm always looking for a creative experience."

The Gizas are planning a virtual watch party with family and friends Friday. Tracy says she's looking forward to hearing everyone's opinions of the finished product.

Reach reporter Michelle Vlasak at 507-333-3128 or follow her on Twitter @apgmichelle. ©Copyright 2020 APG Media of Southern Minnesota.  All rights reserved.

A preview of the episode can be found at bit.ly/christmasshowdown.

Each week, only one team wows the spirited panel of judges, including designer Genevieve Gorder and miniatures experts June Clinkscales and Dave Asling, to advance to the next round of this cheerful competition. In the final round, the top contenders will craft their most extravagant mini holiday houses ever for a chance at the ultimate victory: a grand prize worth $50,000 and the surprise of a lifetime when their winning miniature is super-sized into a magical vacation home decked out for the season.