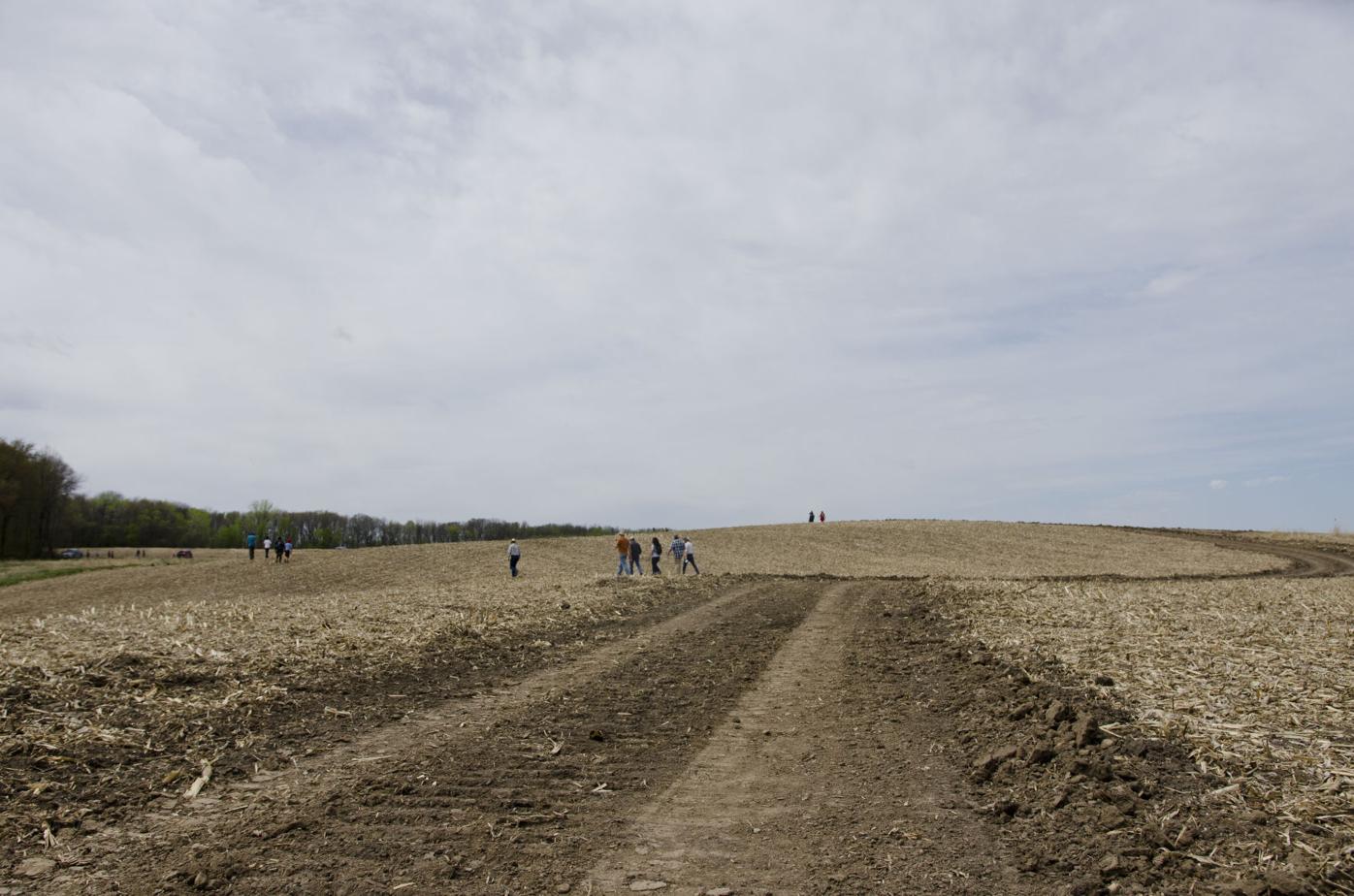 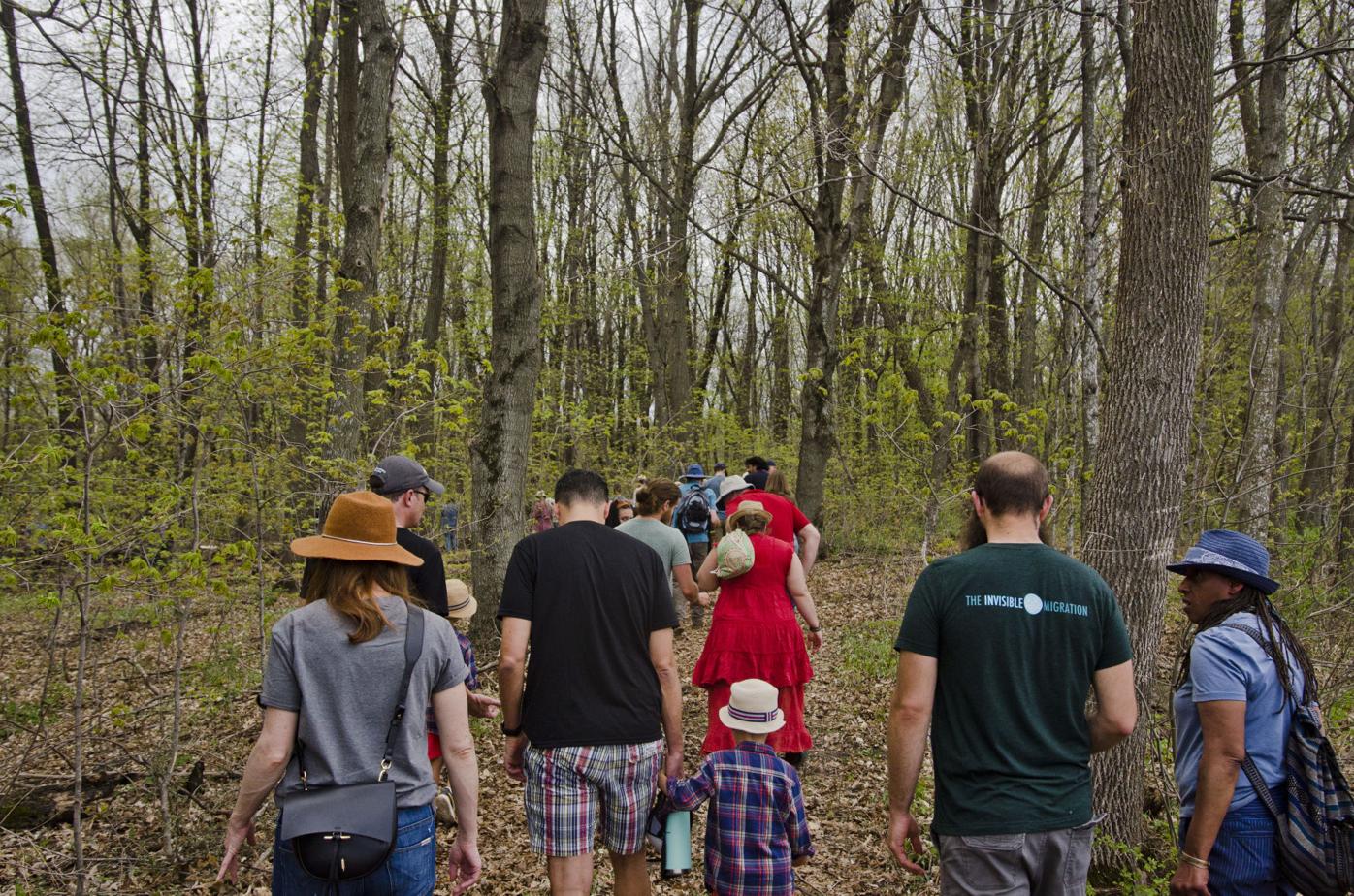 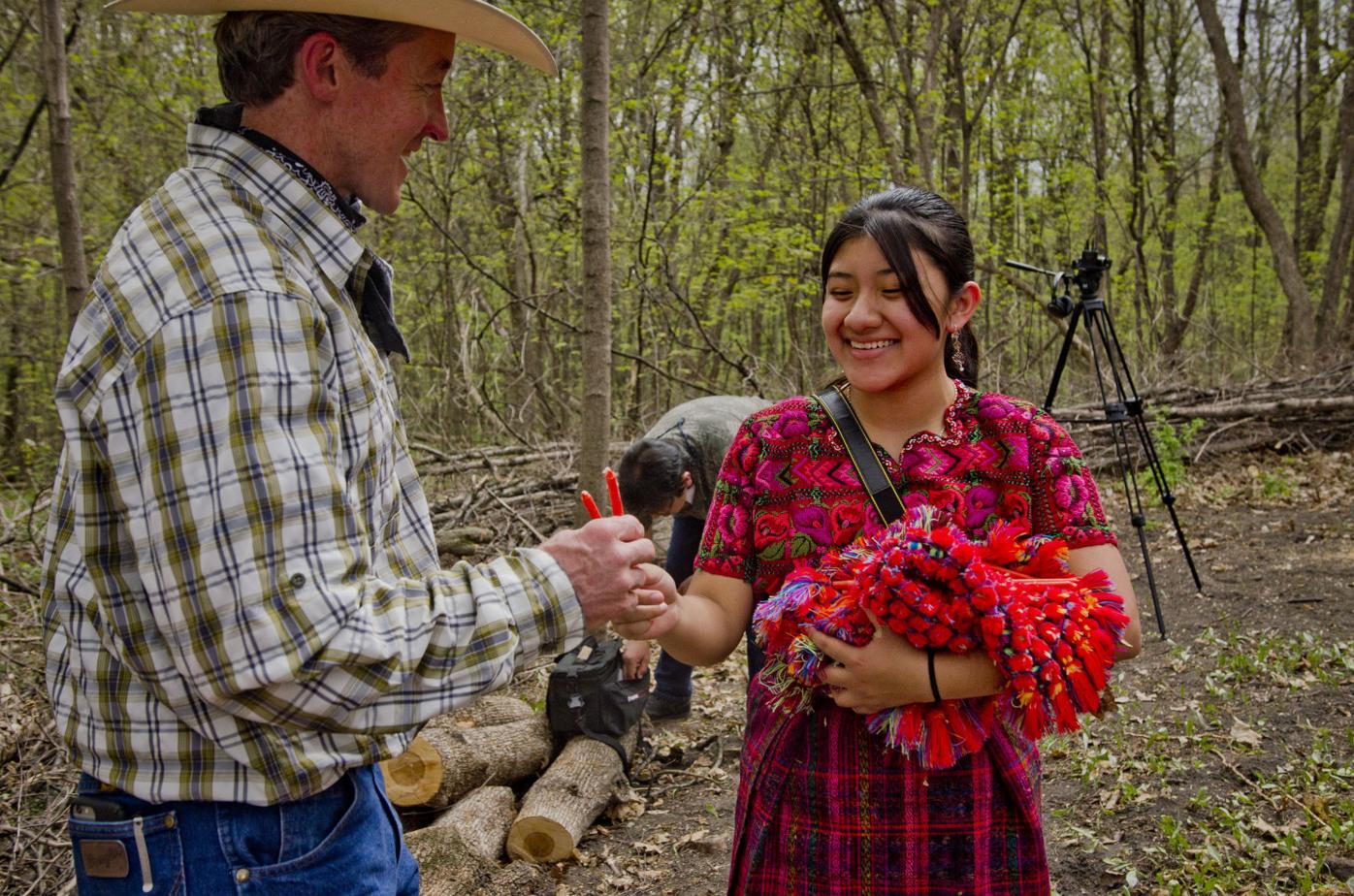 Mary Lena hands one participant a candle to use later in the ceremony. (Michelle Vlasak/southernminn.com) 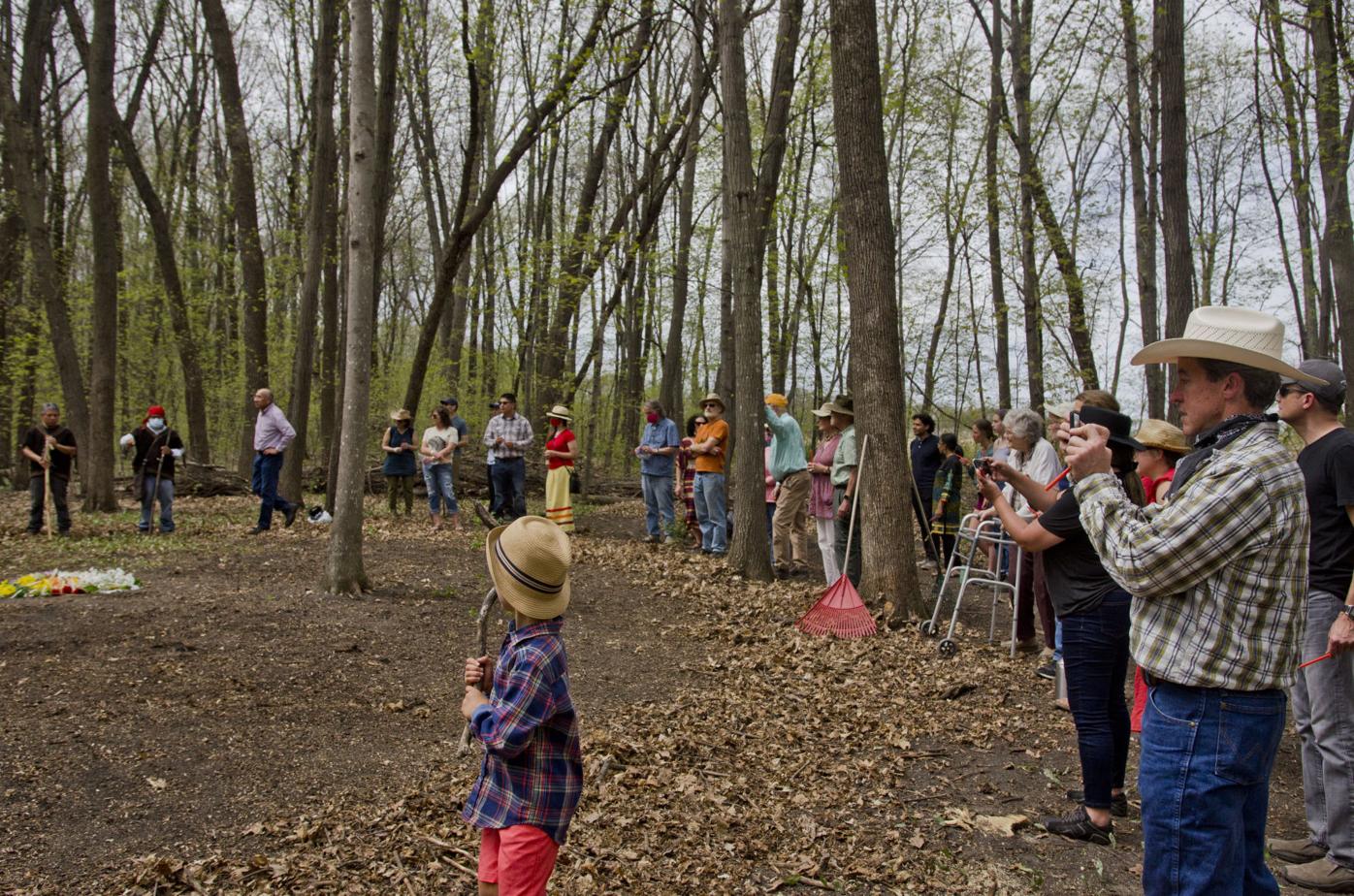 The private ceremony was limited to 50 people. (Michelle Vlasak/southernminn.com) 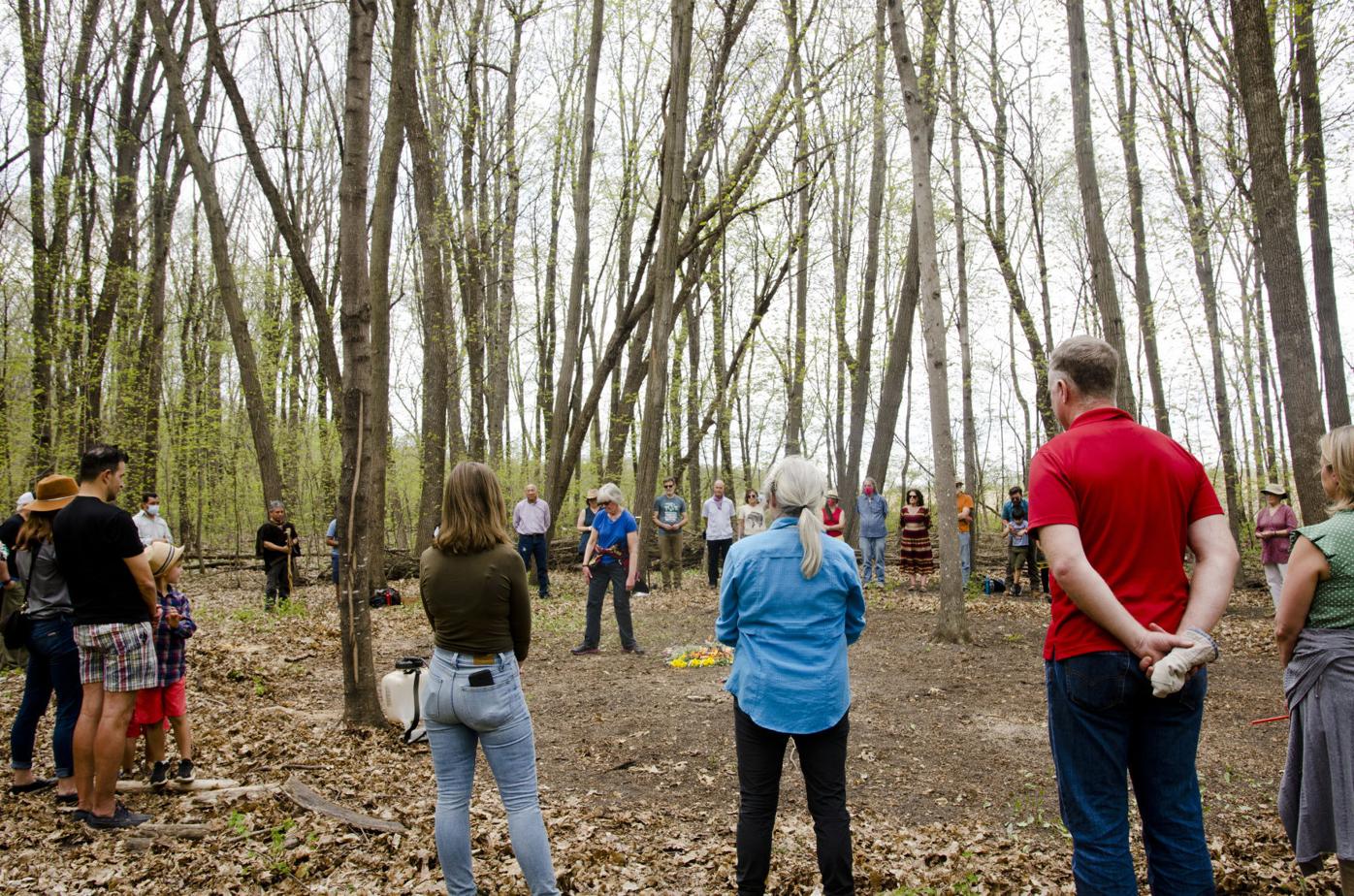 Local supporters of the farm and its message, Native Americans and Guatemalans gather around the prayer mound during the dedication ceremony Saturday. (Michelle Vlasak/southernminn.com) 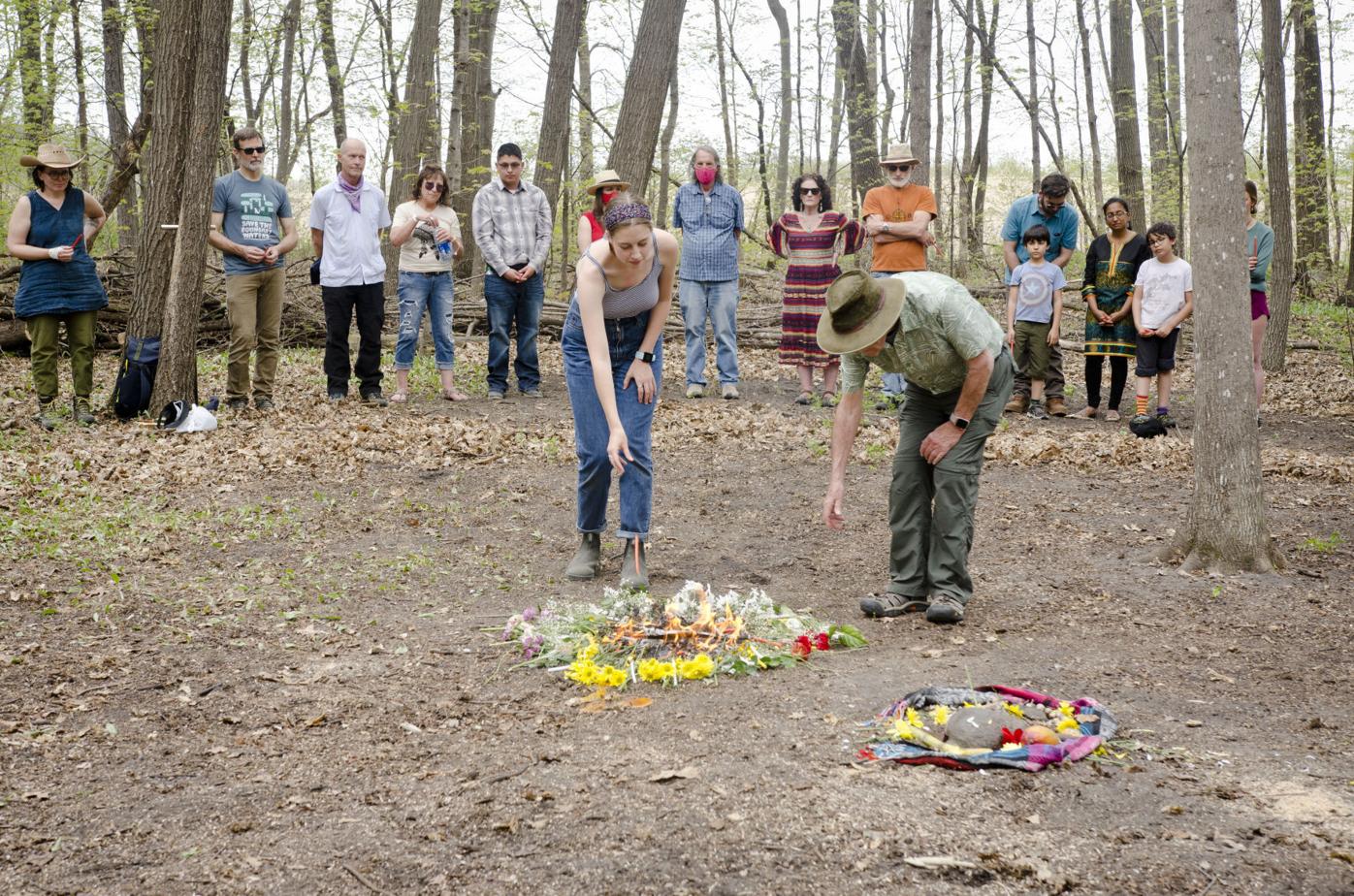 Attendees of the dedication ceremony place candles in the fire while sharing a prayer silently or out loud for others to hear. (Michelle Vlasak/southernminn.com)

Mary Lena hands one participant a candle to use later in the ceremony. (Michelle Vlasak/southernminn.com)

The private ceremony was limited to 50 people. (Michelle Vlasak/southernminn.com)

Local supporters of the farm and its message, Native Americans and Guatemalans gather around the prayer mound during the dedication ceremony Saturday. (Michelle Vlasak/southernminn.com)

Attendees of the dedication ceremony place candles in the fire while sharing a prayer silently or out loud for others to hear. (Michelle Vlasak/southernminn.com)

The crowd, about 50 strong, gathered Saturday in a wooded spot on 75 acres of land just west of Northfield. Circling a mound of Minnesota clay, each held a candle, anticipating the blessing that was to come.

Some brought objects of significance to lay atop the mound, part of the ceremony led by Mayan spiritual leaders and Native Americans whose ancestors once inhabited the region. The Salvatierra Farm dedication, according to the land’s new owners, Northfielders Reginaldo and Amy Haslett-Marroquin, was to “seek spiritual guidance as we figure out how to relate to this space.”

That space, soon to become a regenerative poultry farm, is part of a national initiative to recover land-based places for families across the country, called the Maya Regeneration Project.

Reginaldo, known as Regi, a Guatemala native who has degrees in agronomy, and agriculture and business management, immigrated to the United States in 1992. Amy, originally from Massachusetts is a second- and third-grade teacher at Prairie Creek Community School in Castle Rock. Together, the Haslett-Marroquins dreamed of creating a regional collective of regenerative poultry producers who make a living from the farm, while including their teenage son Lars, who hopes to become a next generation regenerative farmer.

Amy also plans to grow flowers and medicinal herbs on the land and has been successfully supplying friends and neighbors with elderberry syrup.

According to Regeneration Farm’s site, the chickens are raised in a coop and paddock system that integrates trees and perennial crops such as hazelnuts and elderberries for canopy and production. Through small flock size and rotation, perennial crop production and intentional system design that addresses water, soil, biodiversity and other environmental aspects, most negative environmental impacts of poultry production are eliminated. Instead, the environment and soil quality are improved, according to the site.

The multi-ethnic ceremony is representative of the effort to create new traditions, rituals and sacred spaces as part of indigenizing the way farmers see, learn from and work with the land.

Saturday’s events began with a tour of Salvatierra’s sister farm, Organic Compound, in the morning followed by a Guatemalan-style soup prepared by Guatemalan chef Amalia Moreno-Damgaard.

Moreno-Damgaard, nine-time award-winning author and chef entrepreneur, loves what the Haslett-Marroquins are creating, noting that it’s very similar to how indigenous Mayans in Guatemala farm today.

“He grew up very similar to the way I grew up, eating clean food and good food,” said Moreno-Damgaard. “I support the good food on top of that. Those chickens are awesome, they are fed a very natural diet but they are happy chickens as well. You can see that in the consistency and flavor of the meat, because he feeds them a very natural diet.”

The dedication ceremony was carried out at the Salvatierra Farm’s sacred prayer mound, built shortly after the land was purchased and where all of the symbols of the system are already buried. Before buying the land, Regi said he found himself walking the acreage numerous times, and has walked it every weekend since the purchase was official.

“The idea was to let the space speak to you,” he said at the start of the ceremony. “It’s amazing for the energy that falls here to find a warm spot in a 30 degree day. You can feel them because the air, temperature and direction changes.”

Guests were invited to have a permanent connection to that particular area by bringing their own simple, small, yet sacred objects, memories, even a strand of hair, to place on the mound. The objects will continuously be covered with soil, allowing them to become part of the farm story.

The mound is intended to serve as a place of prayer, meditation, mental healing and spiritual renewal, and has been located with the land’s existing 60-plus year-old woods. Along with bringing in sacred objects/memories, guests were also invited to share their prayers silently or out loud while placing a candle in the fire. Negative energies were cleared with the burning of sage; its scent spread it to each guest. The ceremony started and ended with a prayer and a request for those in attendance to get on their knees and offer a hug to Mother Earth.

Ceremony leaders urged guests to come back and to leave with a humble request, “We don’t do this work without indigenous peoples. Regenerative agriculture is what indigenous people did and make sure they do have access to land and that we support their organizational infrastructure. They need us in this effort. The fact we have access to land and resources cannot justify them being behind. They need to lead us. Let us make sure that they are adequately funded.”

The ceremony, Moreno-Damgaard said, is very important and Mayan in nature, something also quite similar to Guatemalan tradition.

'THE FUTURE OF AG'

Reginaldo Haslett-Marroquin saw the greater need to reshape food systems — and after a decade of research and development with countless partners and farmers around the globe, he is now sharing this indigenous framework with everyone.

Regi is launching Salvatierra Farm, a new farm and a home of his own to educate, explore and continually push regenerative progress forward.

Salvatierra Farm aims to be an anchor to spreading this message and training the next generation of regenerative poultry producers.