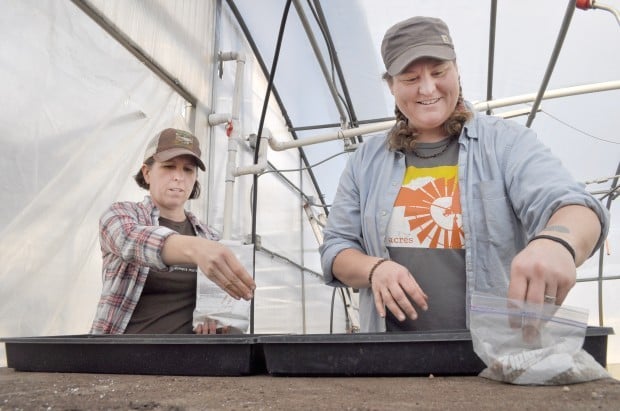 Elizabeth Millard (left) and Karla Pankow plant seeds in trays that will be grown in Bossy Acre’s section of the Organic Field School’s Incubator Program greenhouse, which runs out of the Gardens of Eagan property. (Jerry Smith/Northfield News) 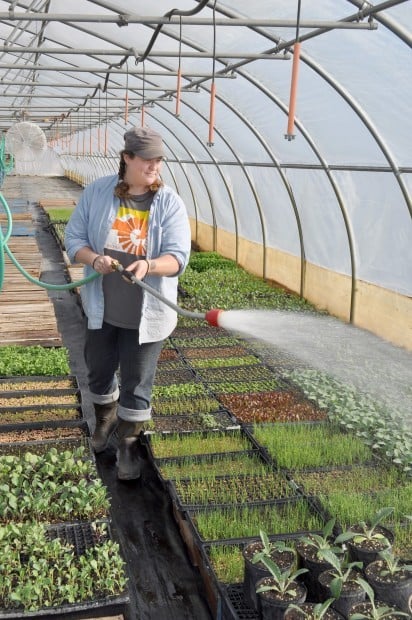 Karla Pankow waters the hundreds of vegetables growing in the Bossy Acres section of the greenhouse. (Jerry Smith/Northfield News) 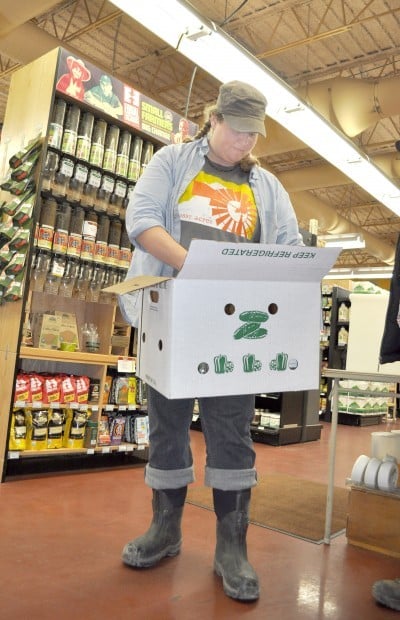 Karla Pankow of Bossy Acres unloads a box of “Bossy’s sweet pea shoots” at Northfield’s Just Food Co-op. The delivery was the first “of hopefully many” to the co-op, said Pankow. (Jerry Smith/Northfield News)

Elizabeth Millard (left) and Karla Pankow plant seeds in trays that will be grown in Bossy Acre’s section of the Organic Field School’s Incubator Program greenhouse, which runs out of the Gardens of Eagan property. (Jerry Smith/Northfield News)

Karla Pankow waters the hundreds of vegetables growing in the Bossy Acres section of the greenhouse. (Jerry Smith/Northfield News)

Karla Pankow of Bossy Acres unloads a box of “Bossy’s sweet pea shoots” at Northfield’s Just Food Co-op. The delivery was the first “of hopefully many” to the co-op, said Pankow. (Jerry Smith/Northfield News)

Karla Pankow and Elizabeth Millard have a vision for their Bossy Acres community supported agriculture model that goes well beyond the three acres the partners will cultivate this year in rural Northfield.

“We want Bossy Acres to be more than a vegetable farm,” said Pankow on Friday as she was preparing to water some of the hundreds of trays of vegetables in the temperature-controlled greenhouse that are the livelihood of Bossy Acres. “It has to be a part of something bigger. We’re fighting for local farms and the protection of the CSA farm model.”

Bossy Acres is part of a growing network of CSA programs across the state. This year there are 100, up from 42 in 2009. In 2004, there were only eight, according to the Minnesota Department of Agriculture, which publishes an annual directory called Minnesota Grown.

“They have exploded,” said Paul Hugunin, who supervises the department’s local foods directory. “We have seen dramatic growth sustained over a decade. It’s an appealing model and something consumers want. It’s a way to have the closest relationship with a farm.”

The community supported agriculture model offers practical benefits for the farms themselves, too, Hugunin said, since it adds a little predictability to an inherently unpredictable endeavor. The benefit is in “knowing how many customers you have, and knowing they’ve paid up front,” he said.

This can be especially advantageous to farmers when there is a weather problem, a drought, flood or early frost, the sort of dramatic weather events that seem to be more common as the climate changes. Generally speaking, customers who sign up for a CSA subscription are predisposed to cheerfully ride the ups and downs of farming.

“Last year, the weather affected every farmer at some level, depending on what they grew and where they grew it,” said Hugunin, referring to the drought that enveloped much of the state. “If you have a CSA, you are structured to handle that better. Customers are in with you.”

Pankow and Millard opened their CSA in 2011 and took workshops on growing, transportation, farm planning and marketing, to name just a few. With that understanding, the partners set out not only to be a successful CSA, but also to become a resource for the community in which they grow.

Now in their second growing season with Bossy Acres, the partners will specialize in vegetables, herbs, melons, and cut flowers and have a community supported agriculture program in rural Northfield after being accepted into Organic Field School’s Incubator Program (not for profit program out of The Wedge Co-op), which runs out of the Gardens of Eagan property.

Millard said that Bossy Acres was successful in 2012, with 47 members. That number has jumped to 70 this year, and she believes that has come with experience and creating a vision early on of what they wanted to do.

Knowing Bossy Acres would be a part of the incubator program helped as well.

“It’s huge for us to be in the incubator program,” she said. “It has helped us get a good start on the season. We’re coming in even stronger.”

In 2012, Bossy Acres vegetables could be found at a number of Twin Cities restaurants, farmer’s markets and food co-ops. This year, Northfielders will be able to find Bossy Acres products at the Just Food Co-op. In fact, Pankow delivered the farm’s first product — “Bossy’s sweet pea shoots” — to the co-op.

“We are happy to be offering Bossy Acres products,” said Just Food Co-op Produce Manager Matt Malecha. “They will be a welcome addition for our local, organically grown greens, year round.”

While Pankow and Millard hope to be in the fields in a couple of weeks, the Bossy Acres partners know there is more to a successful CSA than just planting seeds and growing the vegetables and fruits. Members and potential customers need to be cultivated as well. With an advertising and marketing background, Pankow is handy with getting the word out and more.

“Social media has been big for us,” said Millard, who noted that Bossy Acres has a website (www.bossyacres.com), a Facebook page and a lively Twitter following. “It’s how we communicate with the majority of our members and also how we get the word out about who we are and what we do. We’ve gotten more than 95 percent of our members through social media.”

Bossy Acres also offers newsletters and has even started doing videos to “appeal to all learning styles” that offer tips, recipes and even feature a food writer.

“It’s all about connecting with the community and the farm,” said Pankow. “It’s a two-way situation with our CSA members. We support our members and they support us.”

“Our membership feels like a small town,” she said. “Bossy Town.”

Reach Managing Editor Jerry Smith at 645-1136, or follow him on Twitter.com @NewsNorthfield

Products: Diversified list of veggies and herbs, focusing on many heirloom and unique varieties. You can get your hands on our Bossy goods through a CSA membership, local farmers' markets, restaurants, and co-ops/specialty grocers.

All memberships will have access to recipes, newsletters, potlucks, field days, tours, herbs, and cut flowers