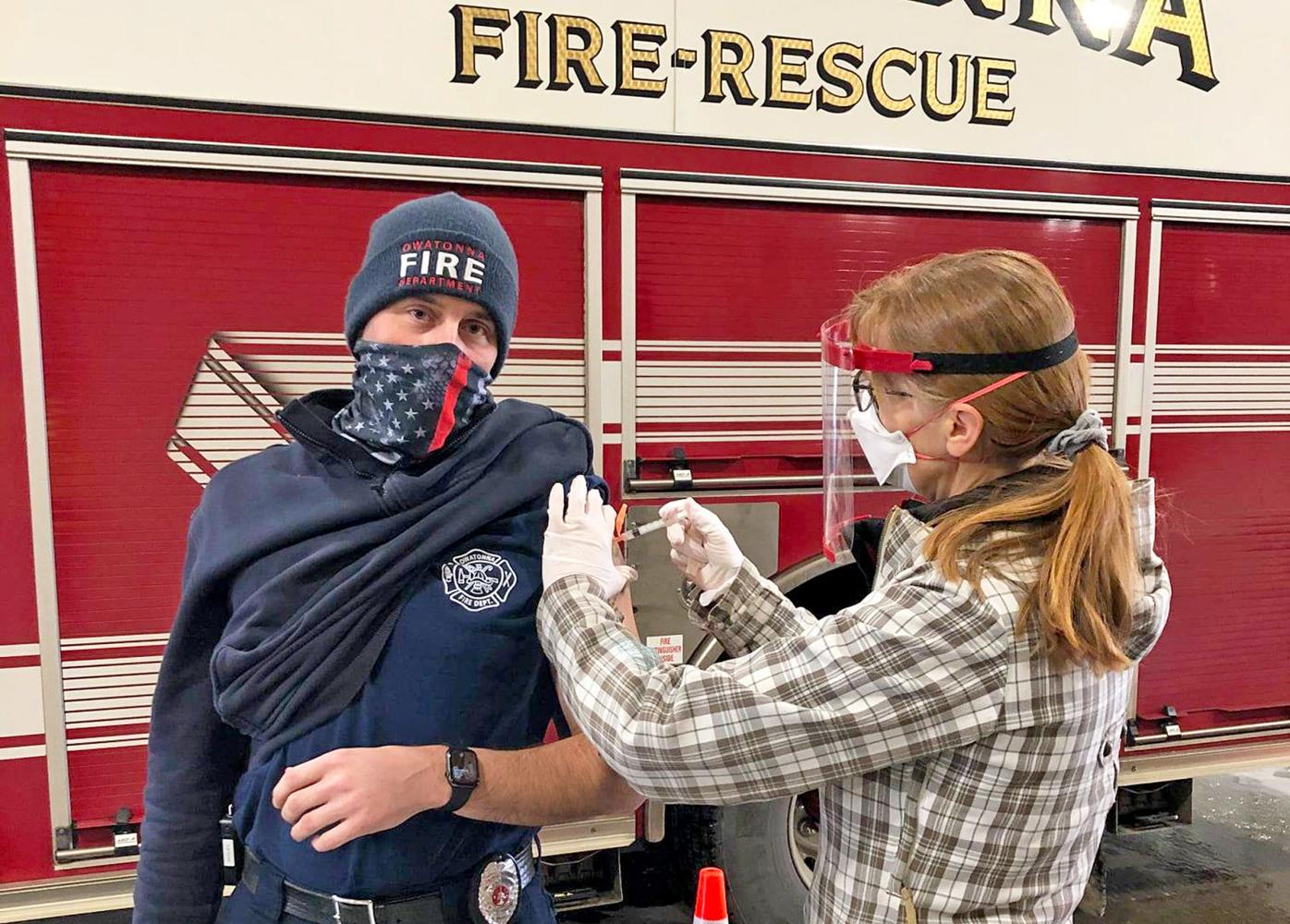 Ryan Seykora with the Owatonna Fire Department was among the first group in Steele County to receive the COVID-19 vaccine, getting his first round from Steele County Public Health on Dec. 30. As the Phase 1 population nears the point of completed vaccinations, Minnesota will be launching a new vaccine pilot program this week that will offer the vaccine to those 65 years and up, educators and childcare workers. (Photo courtesy the Owatonna Fire Department) 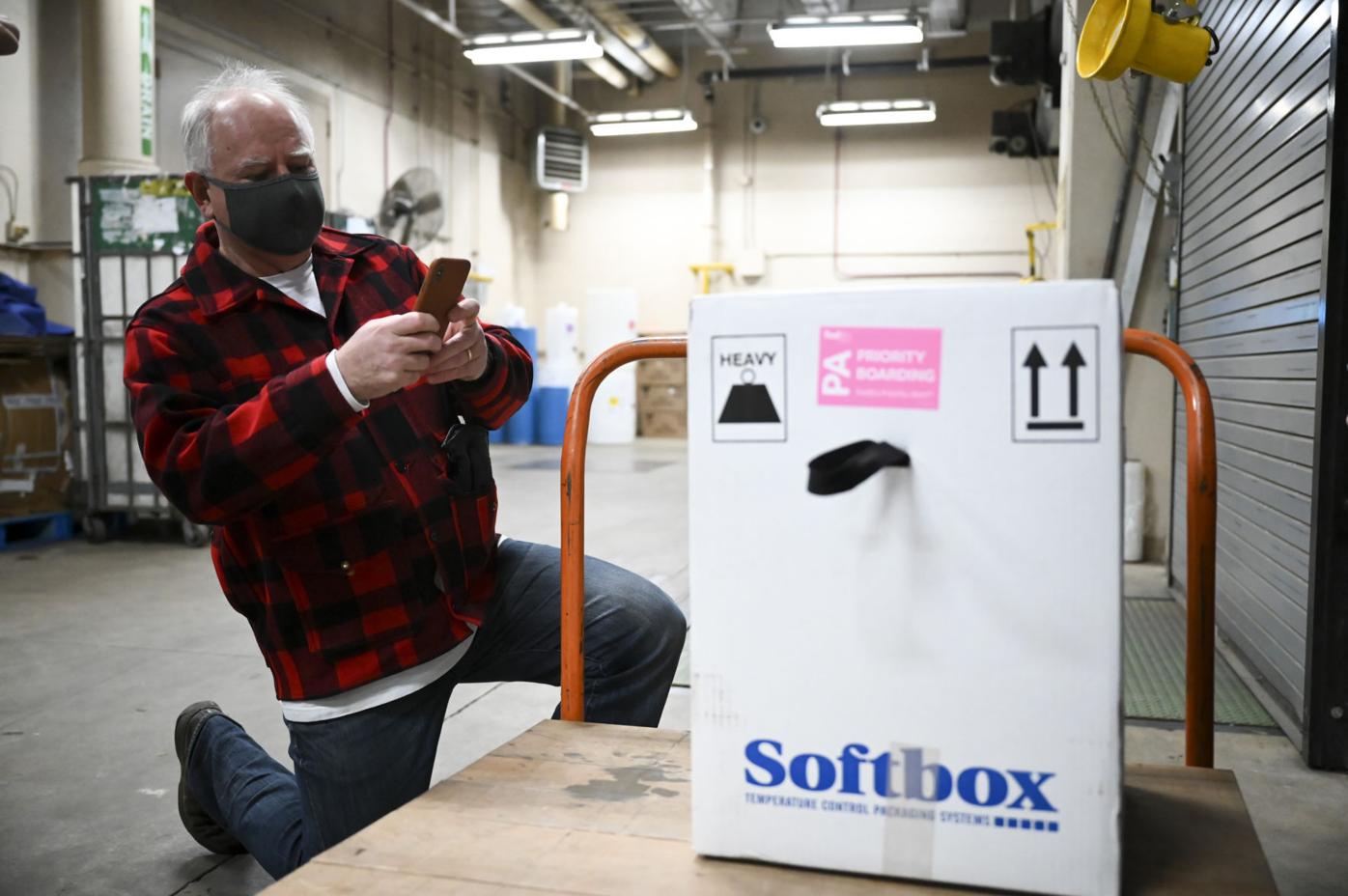 Ryan Seykora with the Owatonna Fire Department was among the first group in Steele County to receive the COVID-19 vaccine, getting his first round from Steele County Public Health on Dec. 30. As the Phase 1 population nears the point of completed vaccinations, Minnesota will be launching a new vaccine pilot program this week that will offer the vaccine to those 65 years and up, educators and childcare workers. (Photo courtesy the Owatonna Fire Department)

Starting Thursday, a new vaccine pilot program will begin distributing the COVID-19 vaccines to adults 65 years of age or older, but not at the rate the governor says Minnesota needs.

According to Gov. Tim Walz, Minnesota has received about 60,000 doses of the COVID-19 vaccine per week and he anticipates that it will remain at that level into February. This week, however, Minnesota is launching a new program that will start offering the vaccine to those in the next phase in nine pilot sites, but only 12,000 of the doses the state received will be allocated to the program.

“The problem is we have millions of Minnesotans ready to be vaccinated and sites with only hundreds of doses,” Walz said during a press conference on Monday. “Until the federal government steps up with a clear plan, this is what we have to work with.”

Steele County is one of the areas receiving very limited doses each week, with Public Health Director Amy Caron saying some weeks they receive zero.

“At this time we simply don’t have the vaccine to get to that next group yet,” Caron said, adding the most doses Steele County Public Health receives in one week is about 200. “We’re still trying to work through Phase 1a and we are rolling out the vaccine as fast as we are getting it. We’re not sitting on any.”

While Owatonna Hospital and Mayo Clinic Health System receive doses directly to vaccinate their staff, Caron said Public Health’s role has been to help with long-term care facilities and group homes administering the vaccine, part of the priority one and two of Phase 1. She said they just started working on the third priority, which includes school nurses, dental and eye care providers, home care agencies, funeral directors and other healthcare staff unable to telework.

“Minnesota Department of Health recently announced more flexibility as doses become available, including offering vaccinations for those over 65 years of age,” Rice County Public Health wrote in a news release. “Rice County Public Health currently does not have doses available for individuals 65 years and older. Once we have vaccines available, we will inform the public through public announcements and media channels.”

As of Monday, Rice County Public Health has received a total of 500 doses for the first vaccinations, all of which have been administered.

Caron said local public health departments, health care providers such as hospitals and clinics, and the new vaccine pilot program will all play a part in administering vaccinations to the 65-plus population. Until more vaccines are available, however, they cannot pick up the pace any faster than the rate they’ve been moving.

“We know people are anxious to get their vaccine, and it’s great that people are so interested in getting it,” Caron said. “We wish we had the amount of vaccine that we need right now, but we don’t. It will come – we just have to be patient.”

“Pfizer has millions of vaccines available and they just need them to be purchased,” Walz said. “Incoming president-elect Joe Biden has said COVID-19 and the vaccine is the number one priority for his administration … we are taking them at their word.”

Walz said based on the promise to distribute 100 million vaccines in the first 100 days Biden is in office, the state can estimate roughly 2 million vaccines will be allocated to Minnesota. He said he is optimistic that if that happens, they will be able to work through this new tier within the first 90 days.

If that is not the case, though, Minnesota Health Commissioner Jan Malcolm estimates it will take 4½ months at the current rate vaccines are being received.

While appointments at the pilot sites will open for scheduling online and over the phone at noon on Tuesday, they are specifically targeting the 65-plus population. Educators and child care workers will receive information about signing up for an appointment from their employer, according to Malcolm.

School districts across the state were informed Monday on the number of vaccines they are currently allocated based on population. The Owatonna school district is being allocated 12 doses, while the Faribault school district will receive 10. Walz said it is important to prioritize educators as getting students back in the classroom is of vital concern, but once again they can only work with what the federal government is distributing to the state. State officials have recommended that schools prioritize their vaccine allotment due to the limited supplies.

“Beginning to vaccinate educators, including all school staff, as well as our partners in the childcare industry through the pilot sites is exciting,” said Deputy Education Commissioner Heather Mueller. “While we do not have enough doses for everyone who wants a vaccine to receive one right away, we are building the system and structure so that once we receive those additional doses from the federal government, we can move quickly to support our school staff and bring even more students back into our classrooms.”

According to the Governor’s Office, child care programs are randomly selected and will be notified if vaccines are available.

While the closest pilot sites to the area are in North Mankato and Rochester, Caron said it is still a good idea for those who qualify for the new program to try to make an appointment to receive the vaccine at either location.

Neither Steele County nor Rice County Public Health departments are keeping a waitlist for the COVID-19 vaccine.