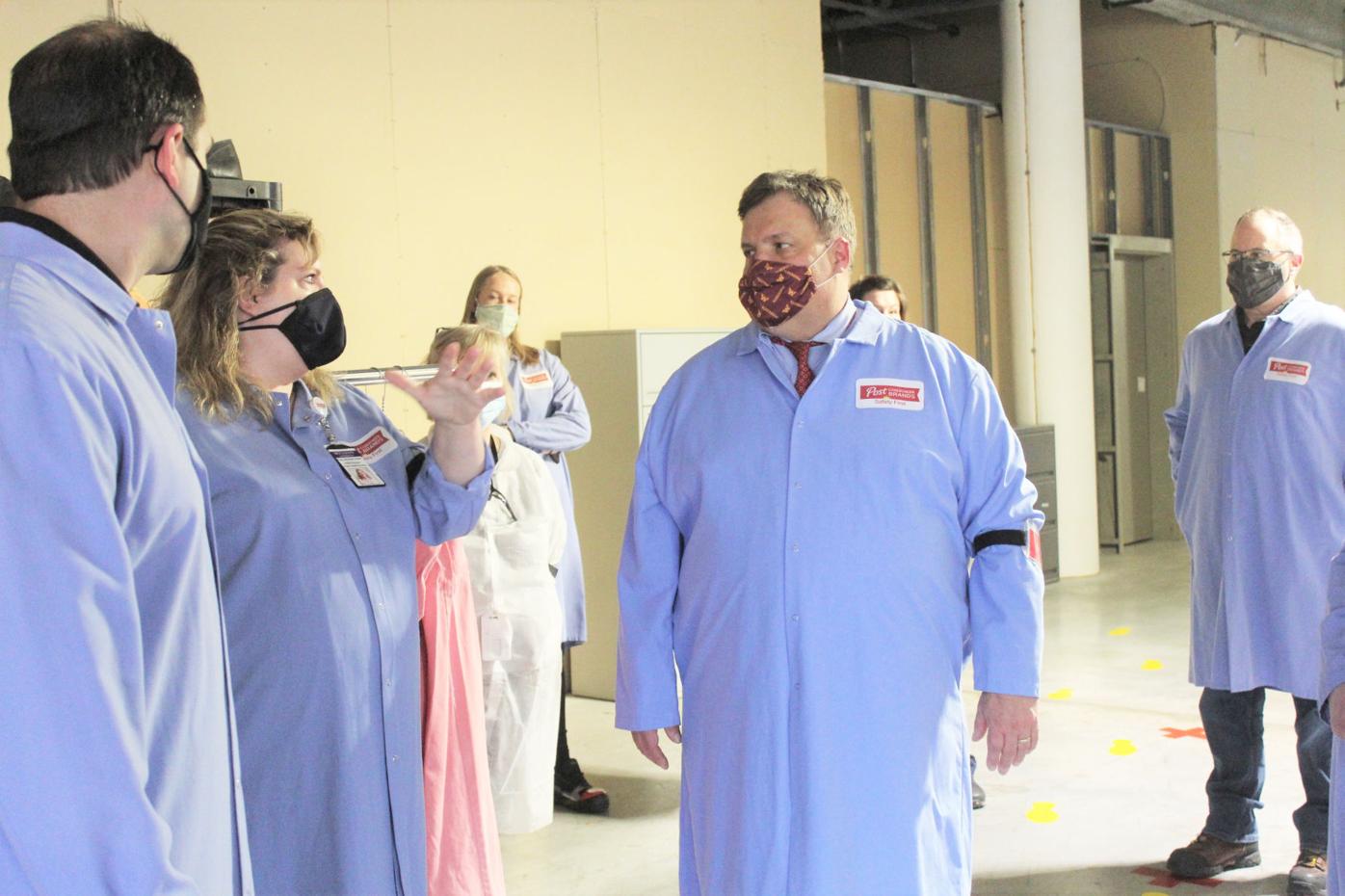 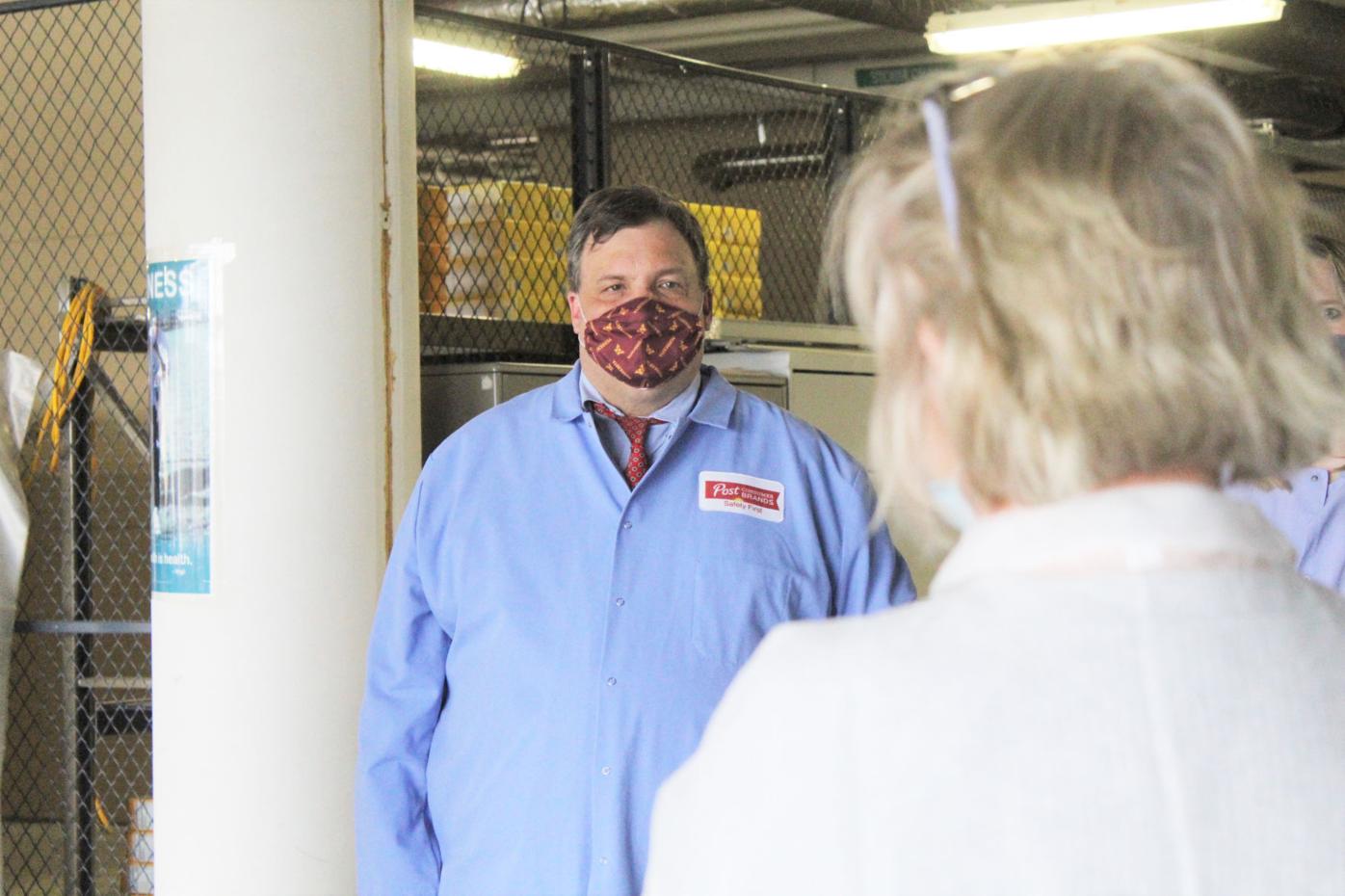 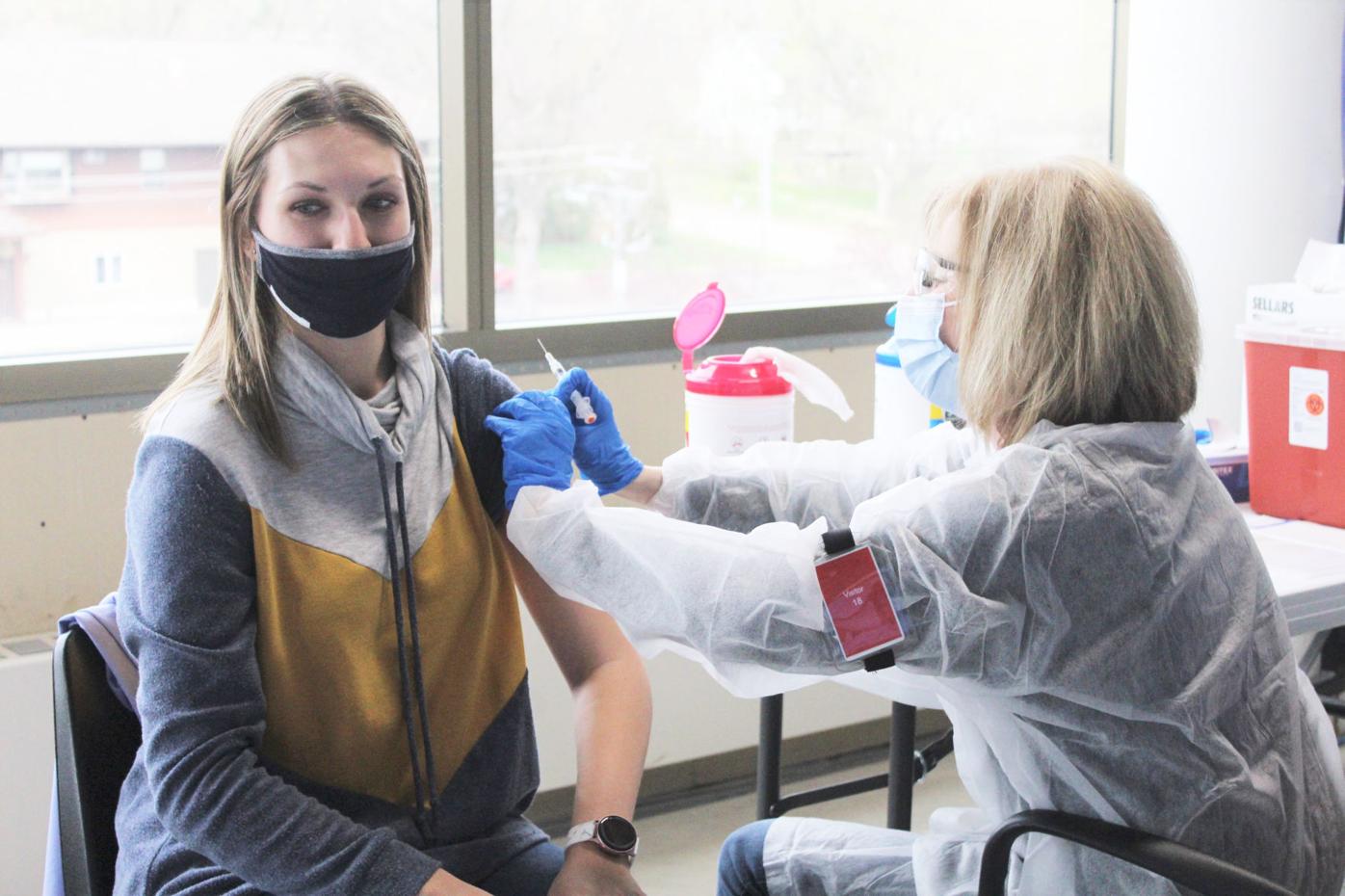 Post Consumer Brands COVID-19 Leave Coordinator Natasha Anderson receives her second dose of the Moderna vaccine Thursday. Anderson, whose shot came during Petersen’s visit, said she was doing so to help end the pandemic and with the knowledge that her mother is terminally ill with cancer. (Sam Wilmes/southernminn.com) 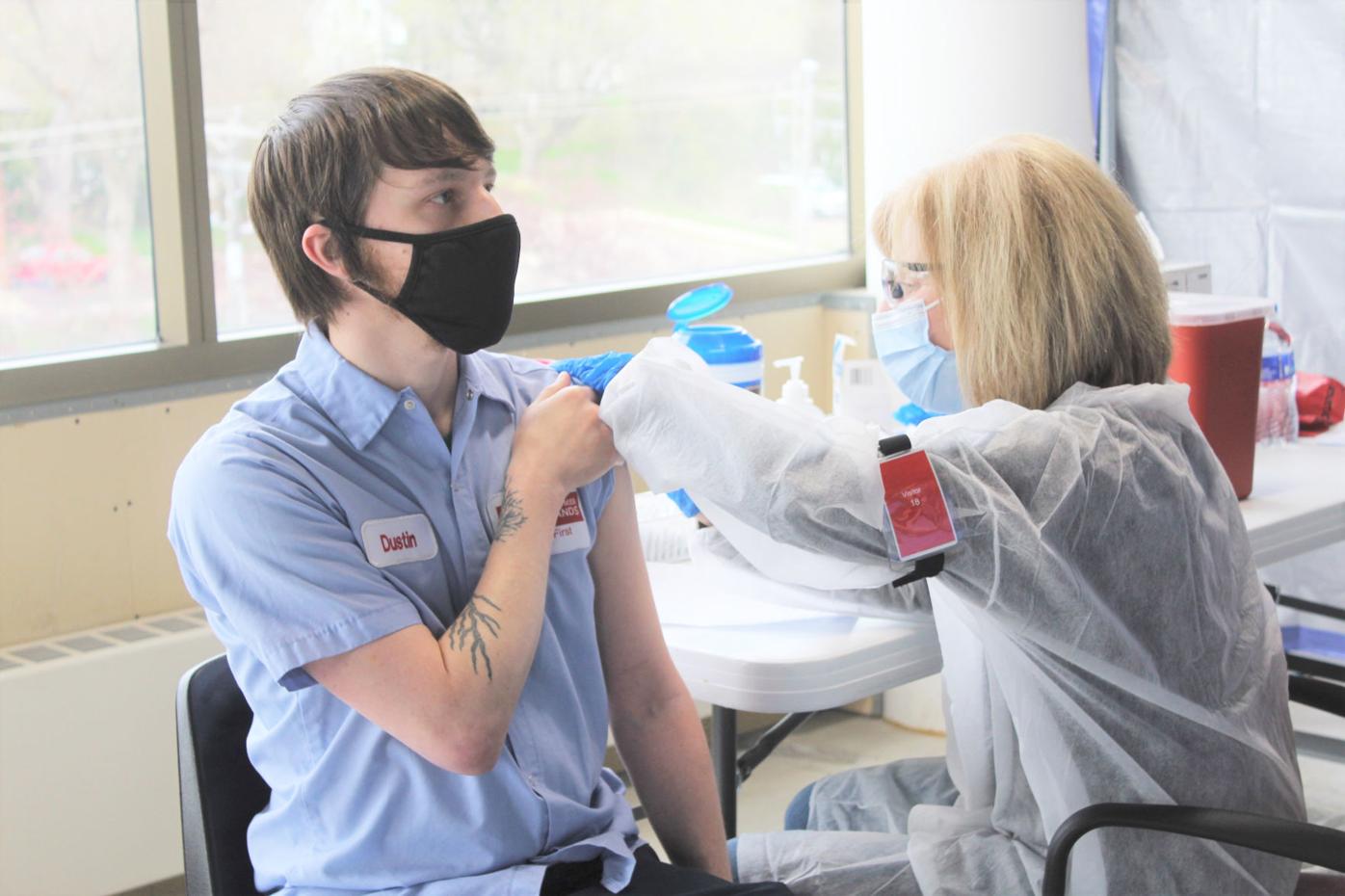 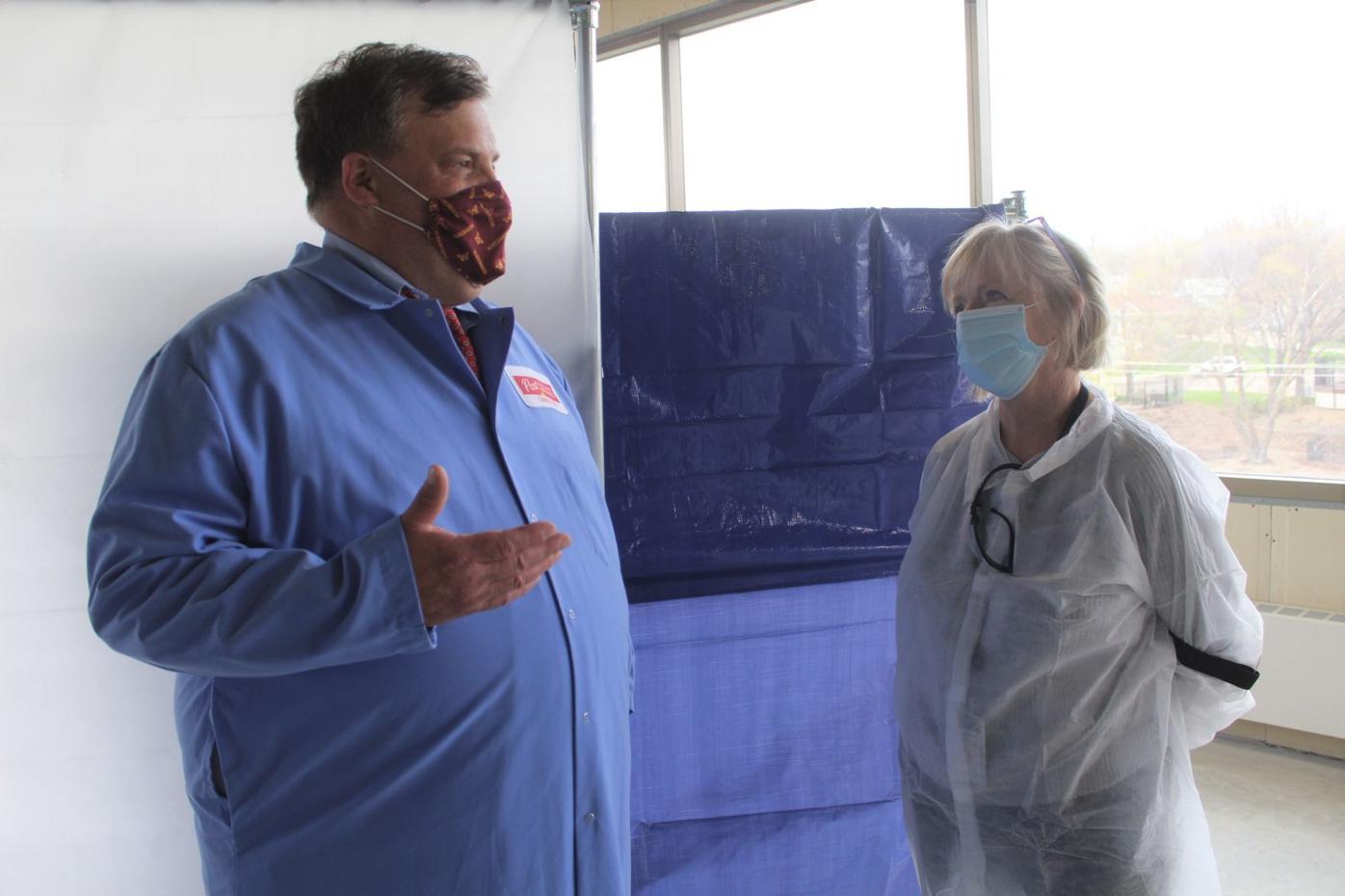 Post Consumer Brands COVID-19 Leave Coordinator Natasha Anderson receives her second dose of the Moderna vaccine Thursday. Anderson, whose shot came during Petersen’s visit, said she was doing so to help end the pandemic and with the knowledge that her mother is terminally ill with cancer. (Sam Wilmes/southernminn.com)

Rolling up her sleeves, Natasha Anderson maintained a steady composure as the needle slid into her upper arm. Within moments, it was over.

Anderson, Post Consumer Brands COVID-19 leave coordinator, was one of 450 employees who received the second and final dose of the Moderna coronavirus vaccine Thursday in Northfield. It’s a step she sees as her part in ending the pandemic while protecting her mother, terminally ill with cancer.

Anderson received her second vaccination the same day the company hosted Rice County Public Health officials and Minnesota Agriculture Commissioner Thom Petersen for a tour as part of a statewide vaccine outreach campaign to encourage vaccinations for people working in food manufacturing. As part of the tour, Petersen visited the pop-up vaccination site in the building, an effort made possible by a collaboration between Post Consumer Brands and Public Health.

Post Consumer Brands is the first private employer where Public Health has administered shots to on-site during the pandemic, a decision Public Health Director Deb Purfeerst said is due to the company’s relatively large workforce. She noted, however, that Public Health has worked with private companies throughout the county to schedule vaccination times at the Rice County Government Center since late December.

Rice County Emergency Preparedness Coordinator Tracy Ackman-Shaw said some local companies, like Jennie-O Turkey Store in Faribault, which worked with Hy-Vee, contracted with providers to offer vaccinations to their employees.

As of Wednesday, slightly more than 40% of Rice County residents ages 16 and older have received at least one COVID-19 vaccination dose, which is lower than the statewide average of 50%.

Ackman-Shaw said Rice County Public Health has been unable to vaccinate the youngest group of people who are eligible to receive the vaccine because Pfizer doses have not been made available to them, leaving Northfield Hospital and Clinics as the primary local access site. She is unsure of when the Pfizer vaccine will be available. Currently, research is being done to see whether the Moderna vaccine is effective on children 12 and older.

According to USA Today, information deemed false by public health and medical professionals has been circulating on social media and messaging apps like WhatsApp. Experts have worried that it’s targeting people of color most vulnerable to the illness, contributing to vaccine hesitancy and fueling mistrust.

One person reportedly received a video featuring a Spanish-speaking person claiming to be a medical professional saying the vaccine had been developed too quickly and cautioned the shot would cause numerous diseases.

According to nonprofit advocacy group VotoLatino, almost 73% of Latino people surveyed knew someone who had COVID-19, and one-third knew someone who died of the illness. Despite that, just shy of half — 47% — reportedly said they were reticent about getting the shot. Around one-quarter said they would not take it at all.

Petersen said he has not seen much work to discredit the vaccines for non-English speakers in Minnesota despite the high number of seasonal employees statewide. He said the possibility that such information would spread had caused him concern, so he partnered with ethnic counsels, including the Consulate of Mexico in St. Paul, to build confidence in the vaccines.

To address uncertainty about taking the vaccine for non-English speakers, health officials have launched community vaccination sites to make doing so more welcoming. One took place Monday at the Faribault Education Center.

Purfeerst noted county health officials encourage anyone with questions on the efficacy and safety of the vaccines to review pertinent information. She points to the continually lower deaths attributed to the virus in long-term care facilities as proof of the effectiveness of the vaccines. COVID-19 has had a disproportionate impact on seniors residing in such facilities: As of Friday, 4,325 of the state’s 6,905 deaths came from residents of long-term care or assisted living facilities.

This week, following the lead of the Food and Drug Administration and the Centers for Disease Control and Prevention, state officials paused administering the one-dose Johnson & Johnson vaccine. The news came after the Federal Drug Administration and Centers for Disease Control & Prevention announced they are investigating what they deemed to be the extremely rare occurrence of blood clots — which have nationwide been found in seven women between the ages of 18 and 48 that occurred six to 13 days after vaccination. That comes out of approximately 6.8 million doses administered nationwide.

Petersen noted the initial sharp impact the pandemic had on food production for Minnesotans. One year ago, food processing plants JBS Worthington and Smithfield in Sioux Falls, South Dakota, temporarily shut down after numerous COVID-19 cases were reported in both places. Those two plants alone account for 35% of statewide food production.

Petersen, appointed commissioner role by Gov. Tim Walz in January 2019, said he has been pleased with the willingness of food production workers to take the vaccines. He urged Minnesotans to receive the vaccine, adding that doing so protects against severe virus symptoms.

Gov. Tim Walz announced Friday that he is highlighting the state’s outreach to connect manufacturing workers with the resources they need to get vaccinated as part of the “Roll Up Your Sleeves, MN’ campaign, which kicked off last week with food service industry employees.

“Our strong-spirited manufacturing workers are the backbone of our economy and food supply,” Walz said. “They have worked so hard during this unprecedented crisis to keep everything from food on our tables to personal protective equipment on our shelves, and now we’re going to make sure each and every one of them gets easy and convenient access to vaccines. Getting this critical workforce vaccinated will help us end this pandemic and get back to business as usual.”