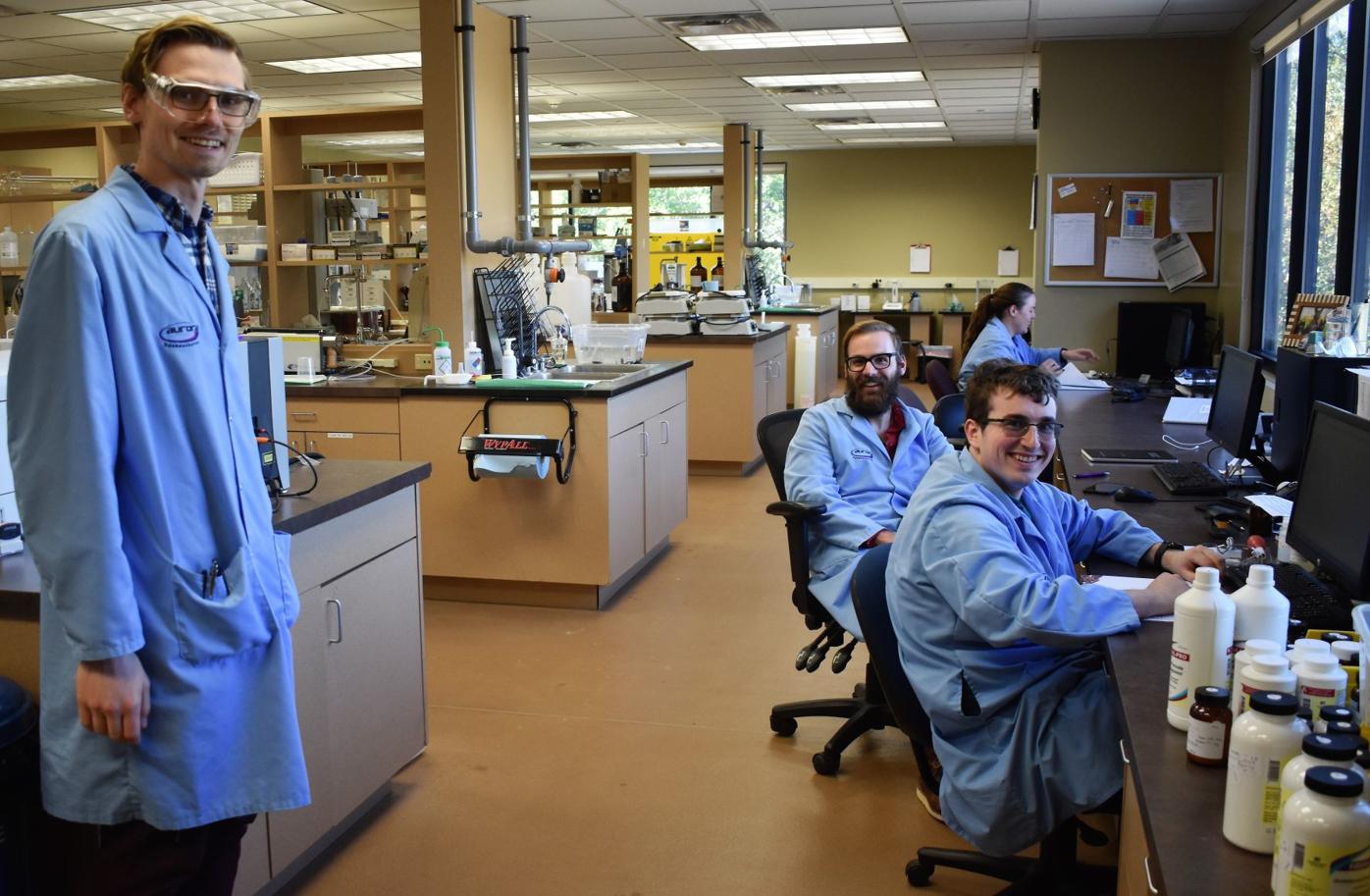 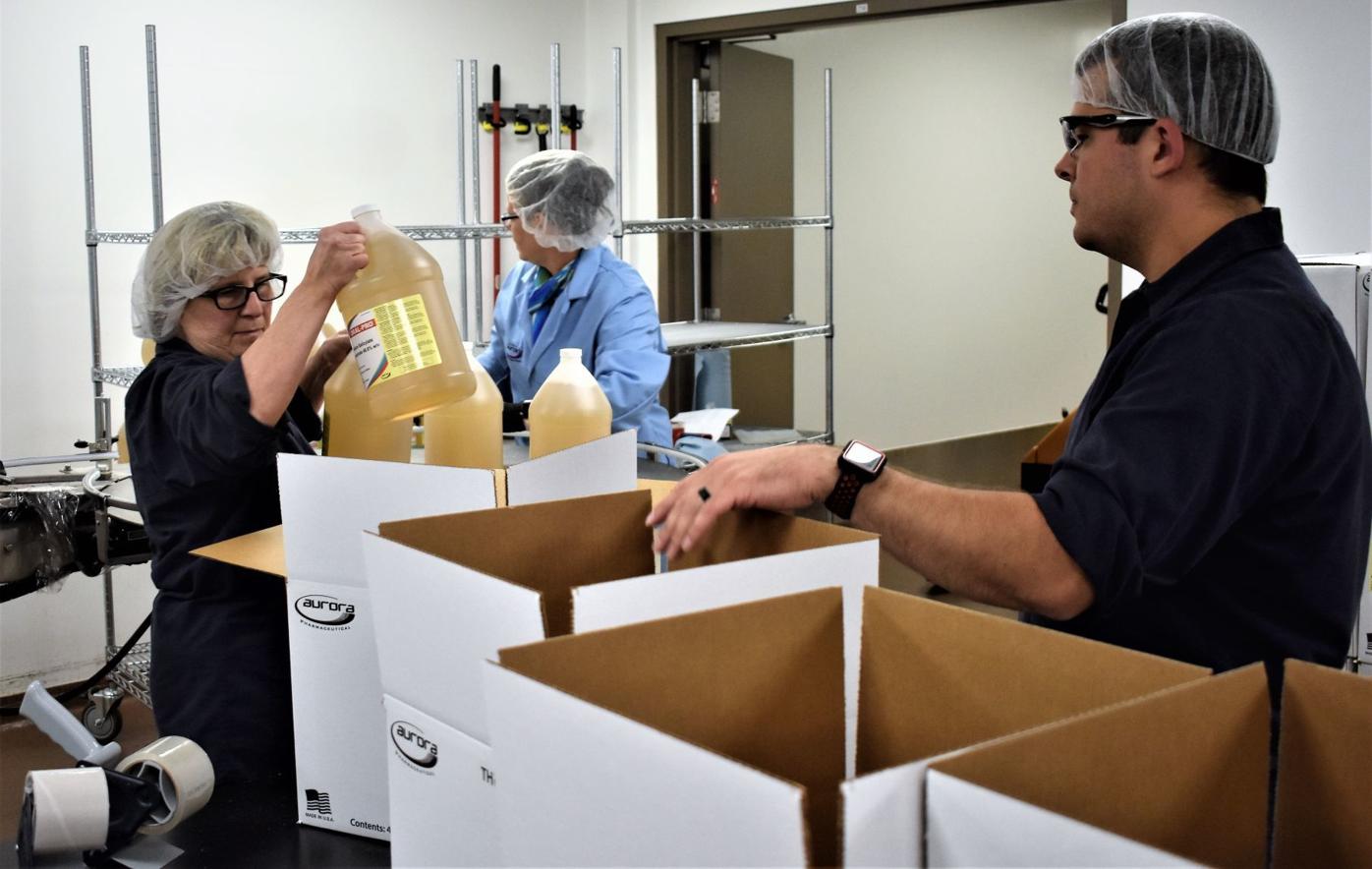 Line workers at Autora Pharmaceutical box some of the company's product. Aurora employs about 60, and the number continues to grow, as it gets more products approved. (Philip Weyhe/Northfield News) 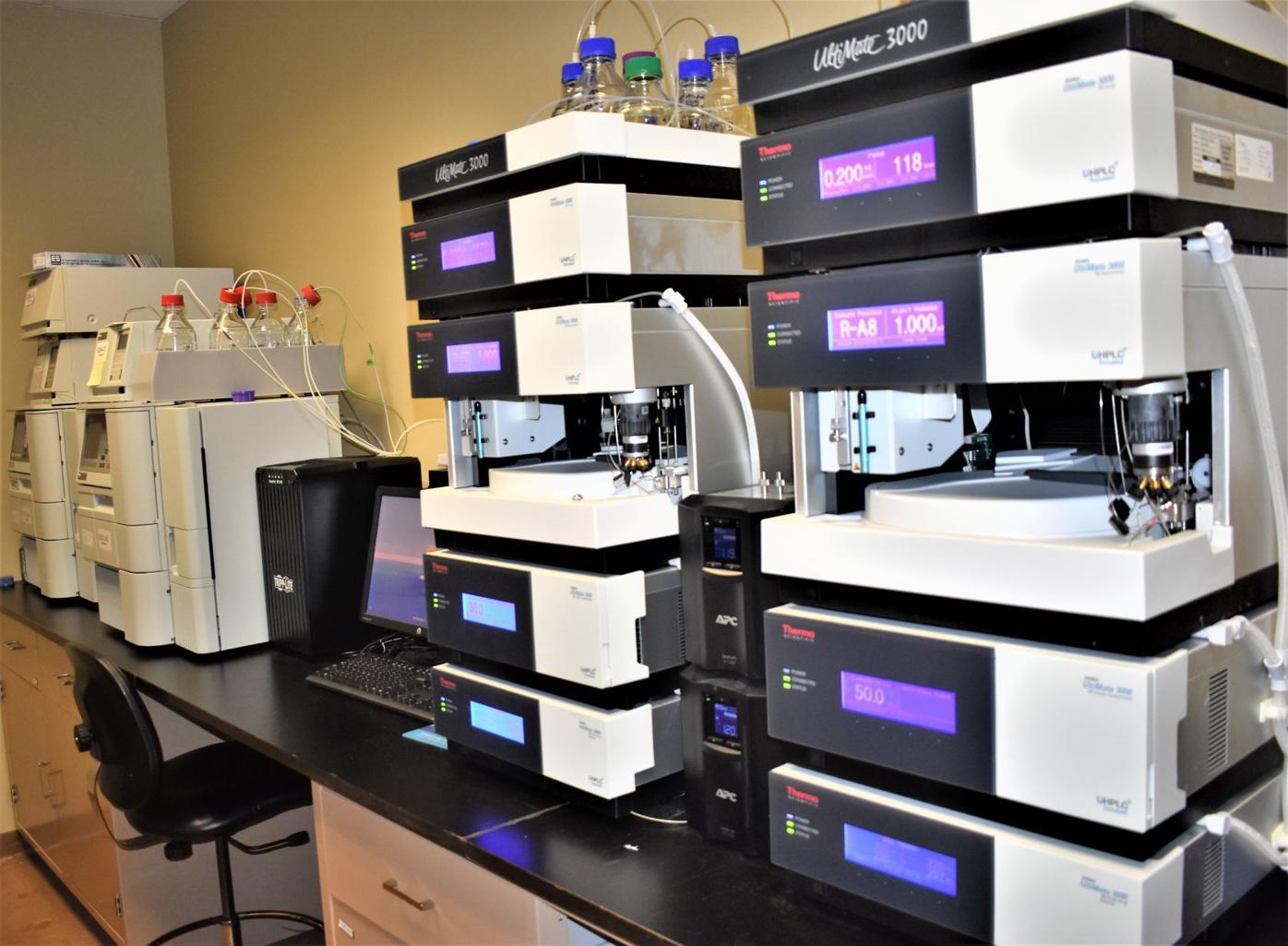 Chemists at Aurora use lab equipment to to test and develop products. (Philip Weyhe/Northfield News) 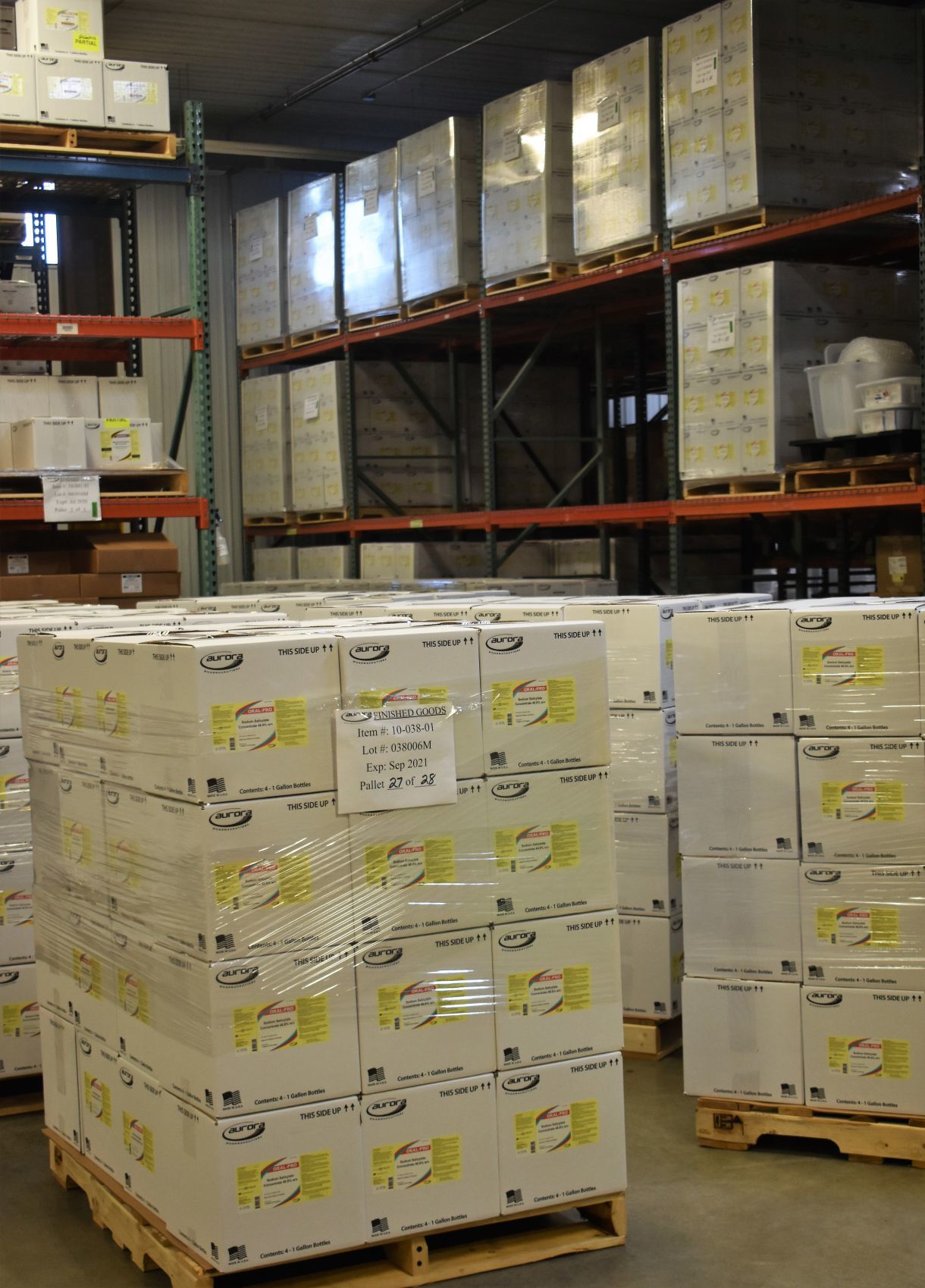 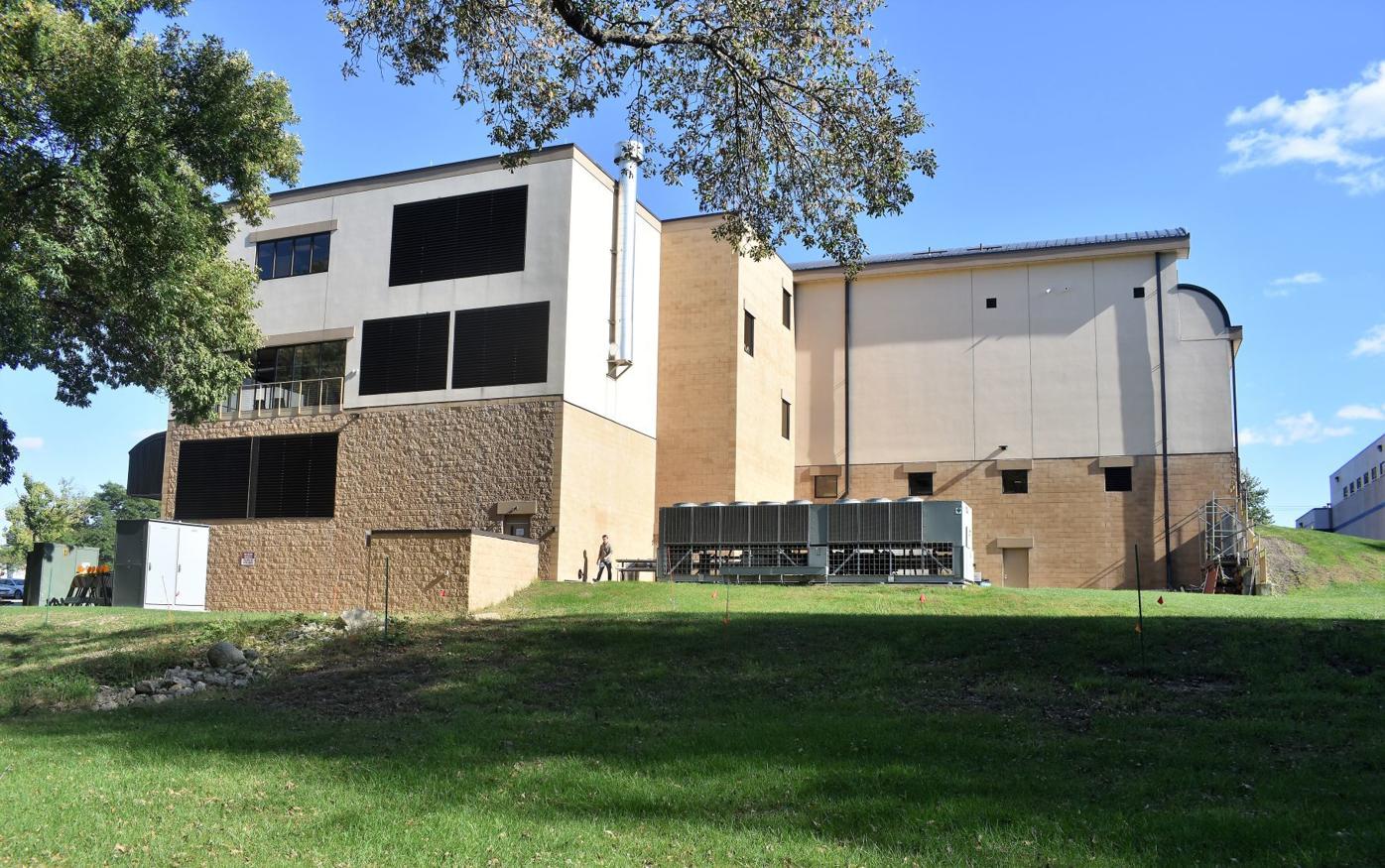 Leaders at Aurora Pharmaceutical are looking to expand the company's campus in Northfield. A space in the back of the building is set to be built on. (Philip Weyhe/Northfield News) 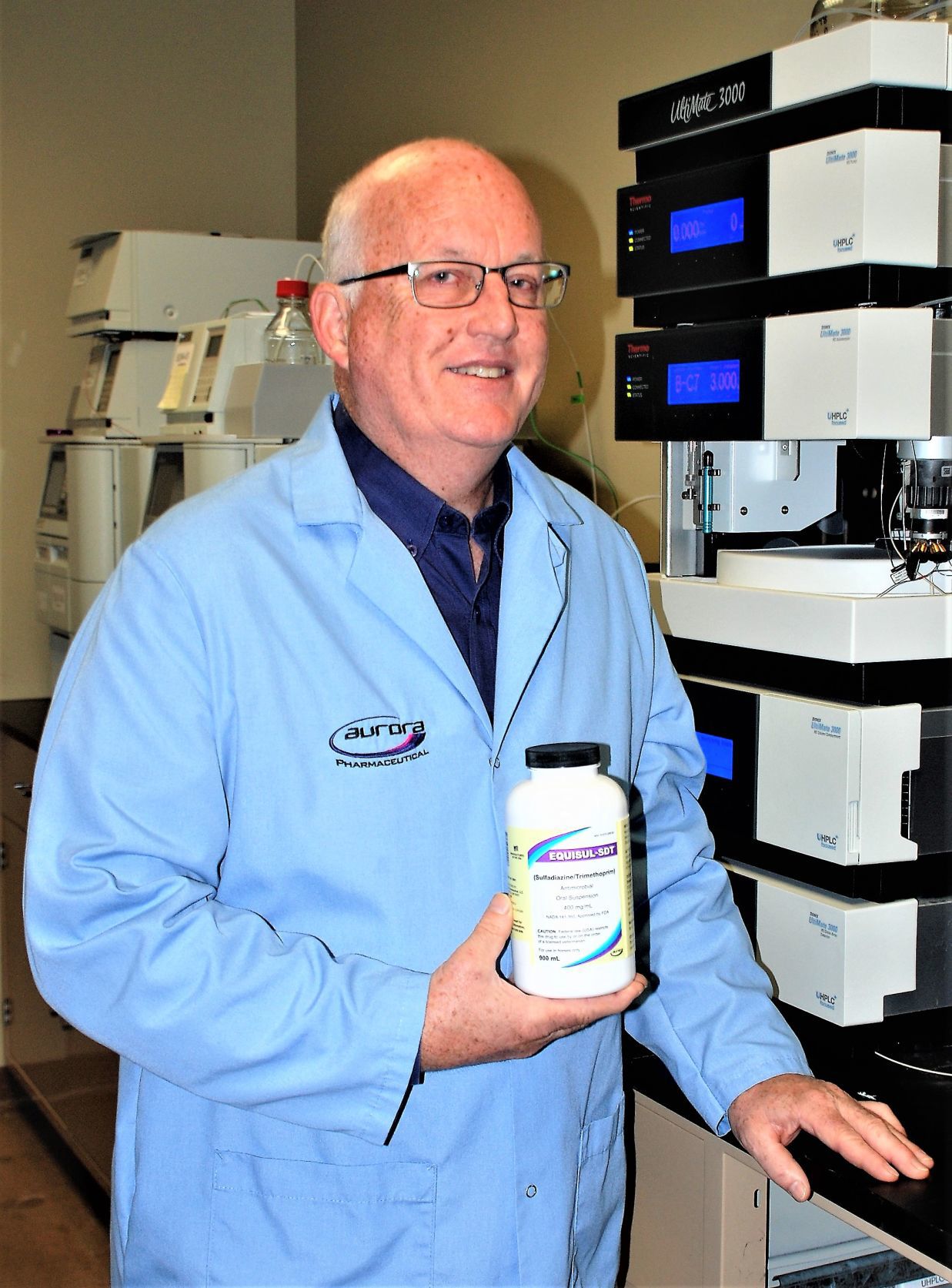 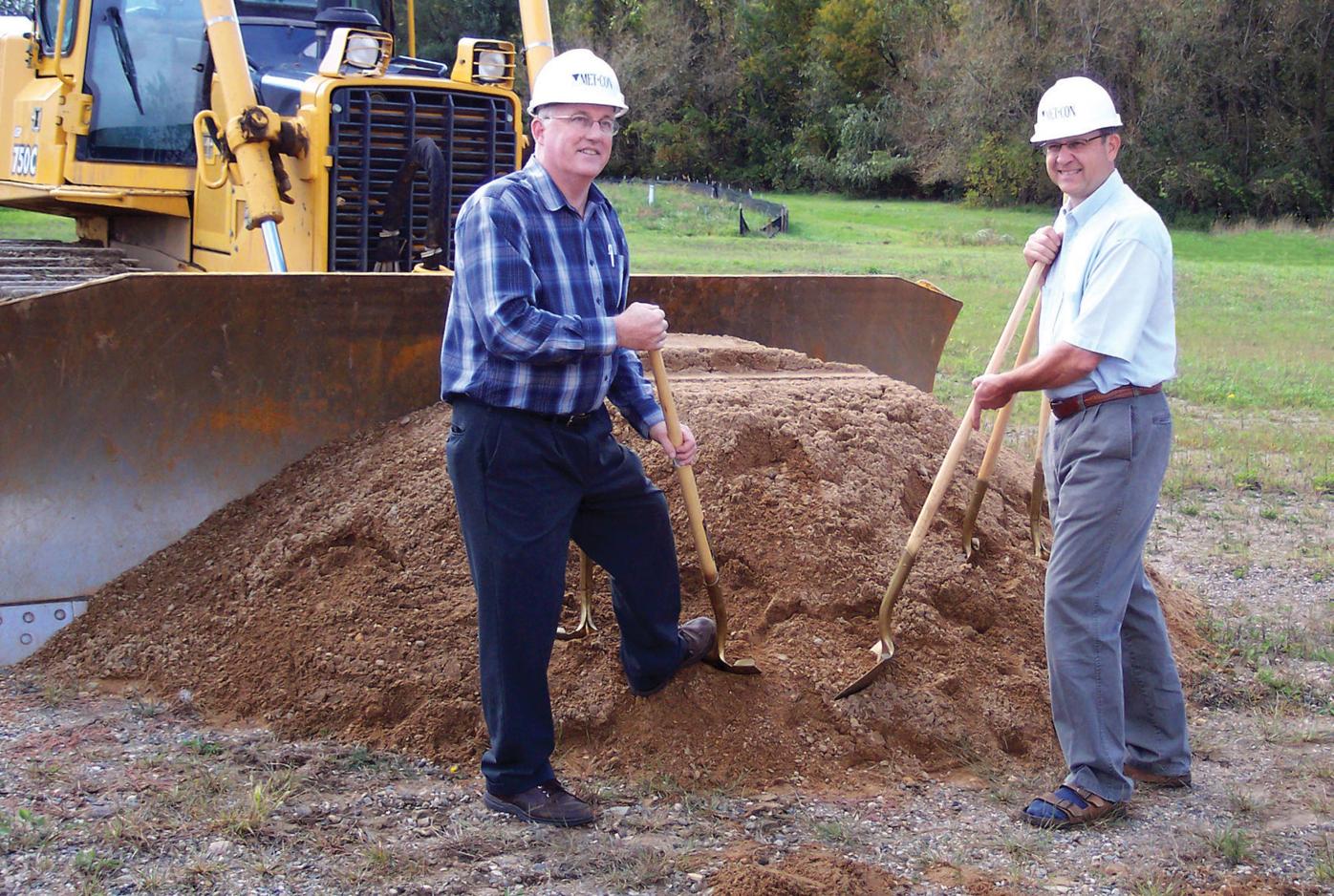 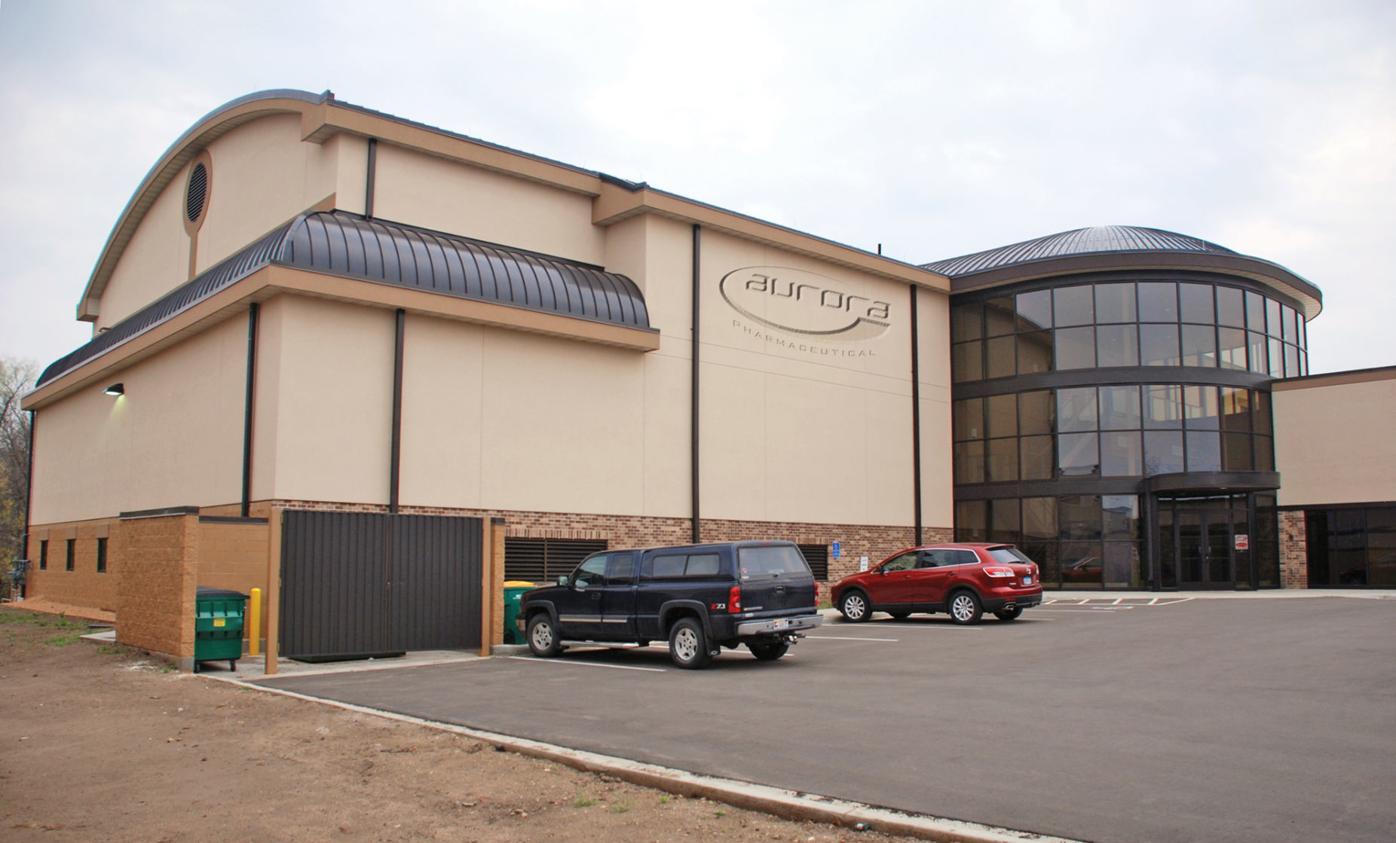 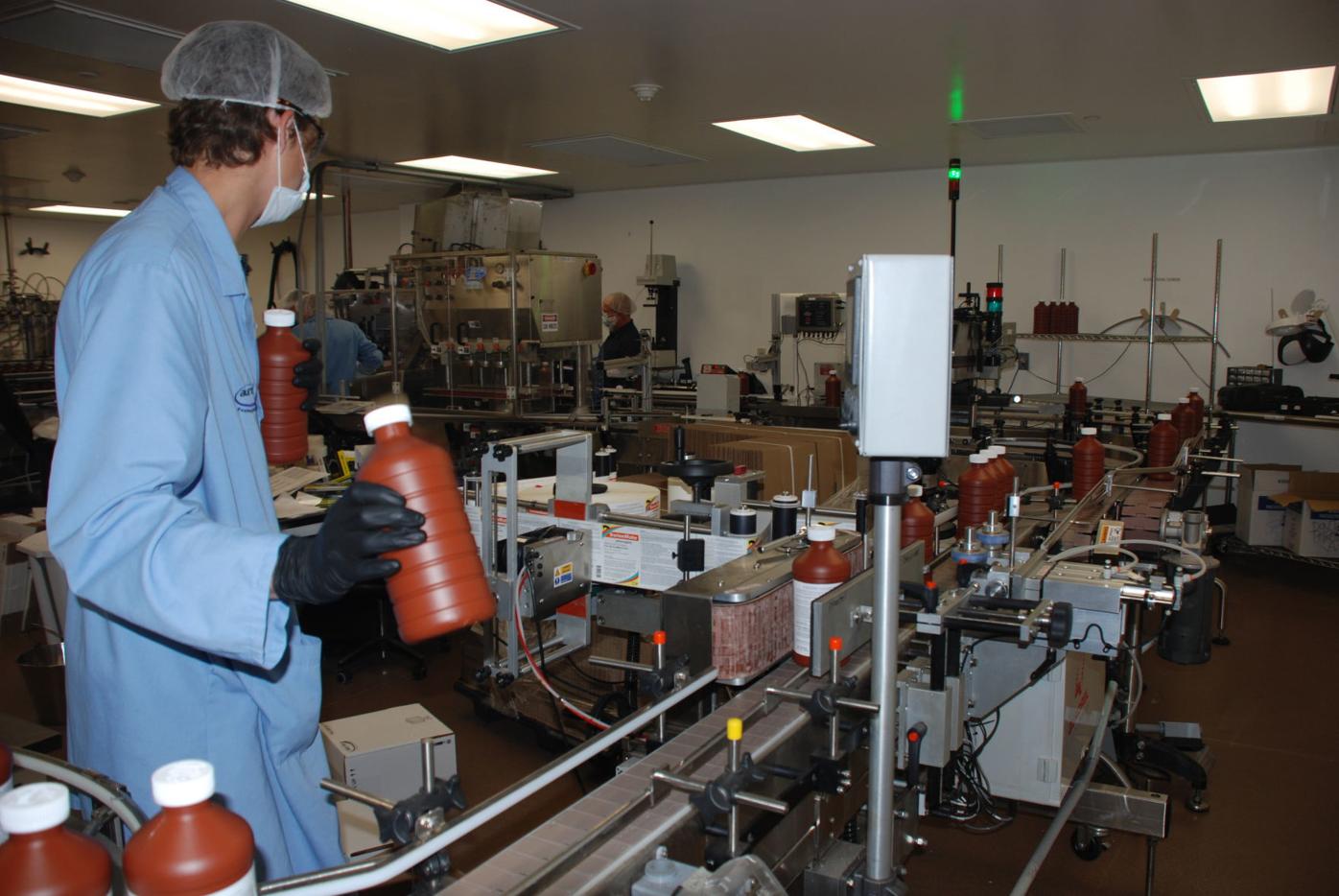 A worker at Aurora handles product running through a line. Aurora has upped its total line of veterinary medicine products to 12 since starting with one product in 2010. (Photo courtesy of Aurora Pharmaceutical)

Line workers at Autora Pharmaceutical box some of the company's product. Aurora employs about 60, and the number continues to grow, as it gets more products approved. (Philip Weyhe/Northfield News)

Chemists at Aurora use lab equipment to to test and develop products. (Philip Weyhe/Northfield News)

Leaders at Aurora Pharmaceutical are looking to expand the company's campus in Northfield. A space in the back of the building is set to be built on. (Philip Weyhe/Northfield News)

A worker at Aurora handles product running through a line. Aurora has upped its total line of veterinary medicine products to 12 since starting with one product in 2010. (Photo courtesy of Aurora Pharmaceutical)

At the rate the company is growing, one might expect Aurora Pharmaceutical to ditch Northfield for greener, or at least larger, pastures elsewhere.

But Aurora isn't doing that.

In fact, the company is doubling down on its Northfield roots, expanding the current building's footprint and enhancing the likelihood the company will remain in Northfield for years to come. The expansion, which began in late September, will add 25,000 square feet to the facility, making room for the company's continued growth.

"That’s been our vision since very early on was the idea of building a full-fledged pharmaceutical company that would support not only Northfield, but the whole region," said CEO and co-founder Mike Strobel.

Aurora develops and sells veterinary medicines for livestock and companion animals. Its products are for horses, pigs, turkeys and more.

Veterinarians Strobel and Mark Warner, now semi-retired, started the company in 2010, after working on a single equine health product for some eight years. That product still didn't go to market until 2012 and didn't get Federal Drug Administration approval in 2013.

Today, five years after approval of its first drug, the company has 12 products on the market, five with FDA-approval; the others don't require the same level of approval, according to Strobel. Leaders say another dozen products are in the pipeline.

The FDA doesn't approve many products annually, so with four, Aurora has half of the animal medicines approved in the last two years. The company has made itself known on the marketplace, giving serious and credible competition to the giants of the industry.

"We’ve developed a full functioning pharmaceutical company — research, development, manufacturing, sales and distribution," Strobel said. "We built the platform we can grow off. That’s what our expansion is about."

In 1981, Warner, now 65, started Cannon Valley Vet Clinic in Northfield. He was looking for an employee and instead got a partner in Strobel, who had just graduated from veterinarian school and came to Northfield in 1982.

The two eventually established the current location of the clinic, on Hwy. 3 in Northfield in 1986.

In 2002, the pair realized, from their work in the veterinary field, that opportunities were available to penetrate the medicinal market. They started working, along with Bill and Pat Sutherland, on their first product, Equisul, used for respiratory infections in horses, in 2002.

They decided in 2006 that they would build a facility, and in 2010, they built the Aurora campus, at which time the Sutherlands dropped out. The building remains in the same location, behind Cannon Valley Vet Clinic. And it will grow there.

The expansion is planned at the rear of the building, facing the Cannon River and East River Trail. In addition to increasing the building size, Aurora is moving a drainage pond, building a path between its parking lot and the trail, and creating a picnic area for employee and public use.

The Northfield City Council approved a request from the company to utilize $231,000 in tax increment finance dollars; that means Aurora would be able to put some of the increase in property taxes, due to the improvements, toward project costs. The city also sold a small strip of land to Aurora to accommodate the project.

"Most important to me is that this is a business that chose to be here in Northfield; the property we’re talking about is small, it’s where (Aurora) wants it and we need to do everything we can to keep them and grow them here," Councilor Suzie Nakasian said.

"We have 60 employees at Aurora. We had three in 2010," Sales and Marketing Director Bob Rehurek said. "I think we’re probably the newest animal health pharmaceutical manufacturing company created in the United States in 25 years."

According to Strobel, Aurora has grown by 35 to 40 percent in each of the last few years. The company is selling three times as much of its original Equisul product as it was five years ago, and that's just one product.

A large part of the success, leaders believe, comes down to the company's marketing strategy.

"We sell at the same price for everyone — large, small, middle," Strobel said.

Many companies charge differently, depending on the quantity a customer is buying. This often means that large buyers have an advantage, because they get a better rate buying in bulk.

Aurora, though, sells at the same rates, regardless of how much is being purchased.

"We’ve kind of tipped the industry upside down in terms of how we market products," Strobel said. "That tiered pricing model (that other companies use) creates inequities."

He added, "We took a lot of the game-playing that goes on in our marketplace, and took it out. So now the half that was neglected, they love us. We had 300 customers, small and mid-size practices, in one month, that all switched to us, because they like the way we do things."

Leaders believe success is also down to the quality of staff, and in turn, product.

"Other manufacturers respect us, and they probably would prefer we’re not around, because Dr. Strobel has put a team together that is very experienced and capable," Rehurek said.

Aurora leaders are proud of a working environment at the company, something they believe to be positive and rewarding for employees across the board. Most of the hourly jobs at the company pay $20 per hour or more, with line jobs often starting at $17 per hour and quickly moving up.

Brian Rehurek is Bob's son and has been working at the company since 2009, before the building was even constructed. He started as a lineman and has worked his way up to a production lead, meaning he heads a team of about five.

"I’ve enjoyed it quite a bit," he said. "I went to school for something else — came here and learned a lot. I couldn’t do half the stuff then that I can now. You learn something new every week."

He envisions staying into the future and thinks a lot of workers around him feel the same.

"Half our line staff has been here for over three or four years, and they’re sticking around and like where the company is moving to," he said. "It’s a good environment; they all get along with one another."

Strobel noted that Aurora employees are trained in Good Manufacturing Practice, a system in the pharmaceutical industry for ensuring that products are consistently produced and controlled according to quality standards. He said the skill sets that go along with GMP are unique and highly sought after, so employees at Aurora have options inside and outside the company.

While Warner has mostly moved on from the work at Aurora and Cannon Valley Vet, Strobel plans to stick around for a while longer. He has a strong enough team in place to avoid working himself to the bone, but he still wants to oversee the company's growth and forward trajectory.

"We are by far the fastest growing company in the generic industry. When you grow that fast, there are all kinds of challenges," he said.

And the possibilities for Aurora are wide open. Since its first original product, Aurora has focused on creating alternatives for generic drugs already in the market.

"I think it’s very favorable, because of the lack of second-tier competition, generic competition," Strobel said. "There is a lot of opportunity for growth. Almost all the products out there only have one manufacturer."

Presently, the company distributes in only the U.S., but reaches all 50 states. Aurora's distribution company, The Provisions, delivers to 20 states regionally, while three other companies are used to reach the remaining network.

Aurora is exploding domestically. And who knows — perhaps Northfield's animal health manufacturing company will soon be an international force. Regardless, it intends to be right here in this community.

"We’re trying to build something that is going to stay in Northfield for a long time," said Rehurek.