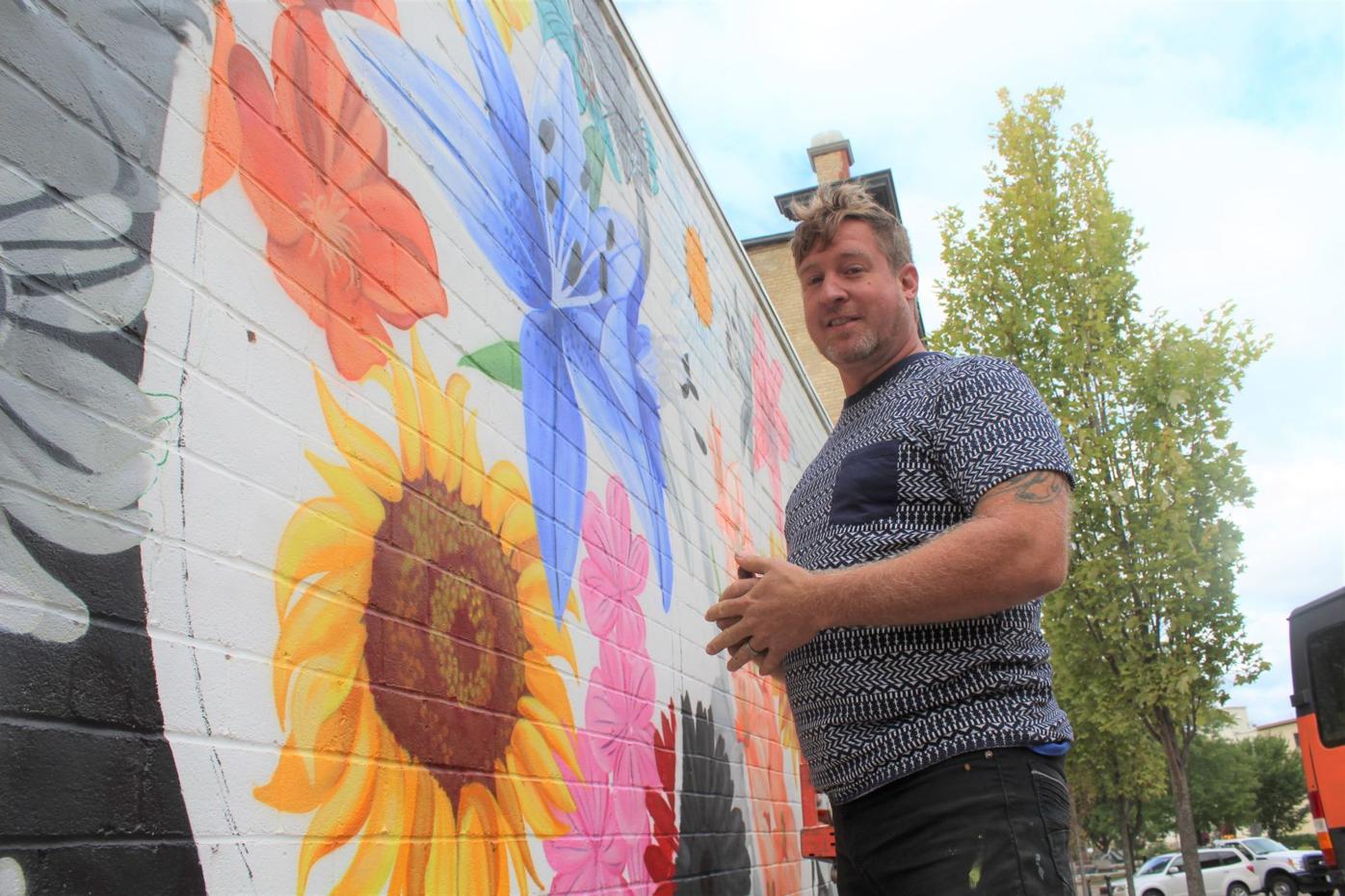 Brett Whitacre, who has engaged in different art mediums during his two-decade career so far, has been in Northfield this week to develop a mural on the west exterior wall of Domino’s. (Sam Wilmes/southernminn.com) 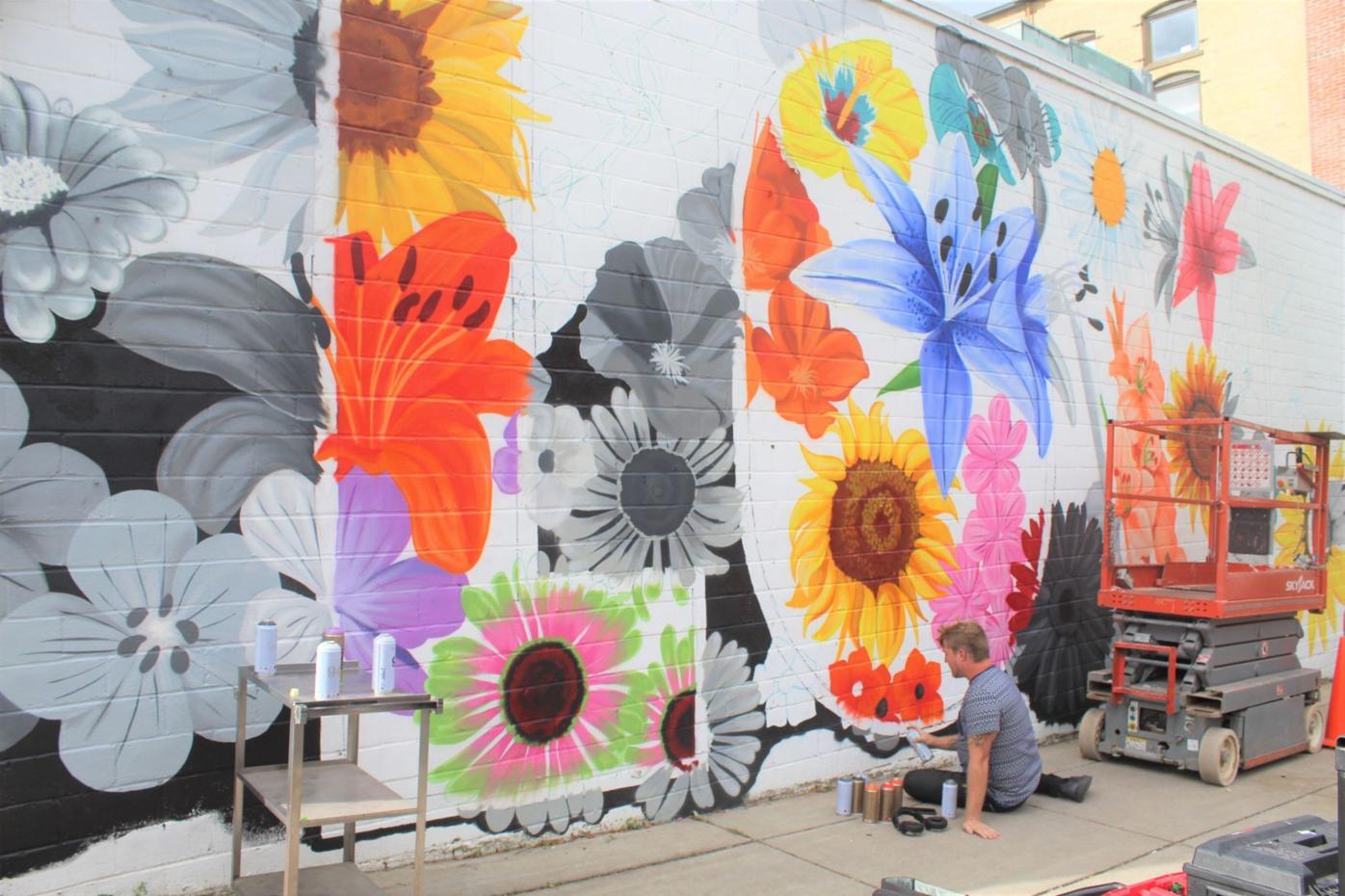 Though work still remained on the mural, Whitacre had made progress on the project as of Thursday morning. (Sam Wilmes/southernminn.com) 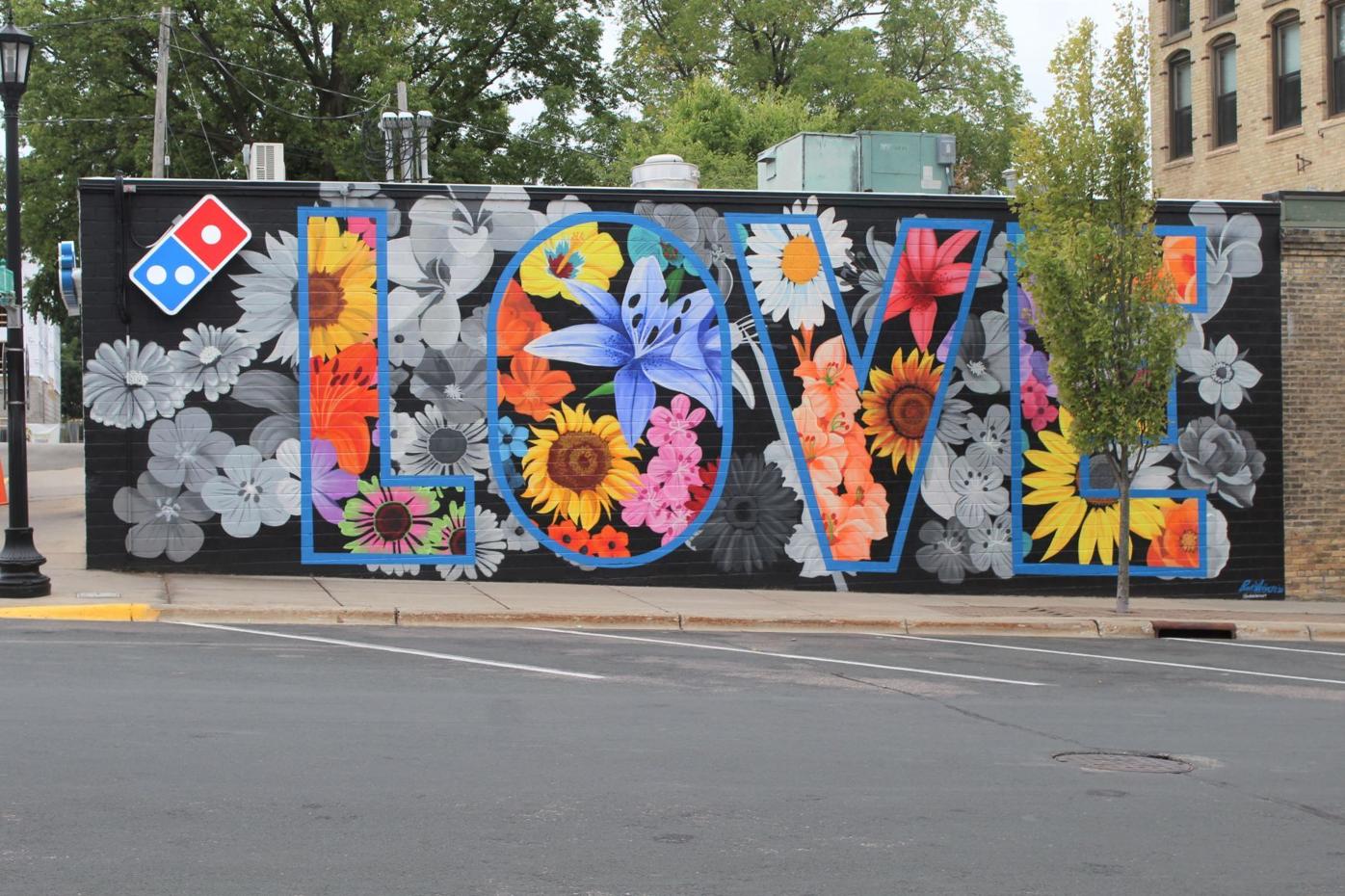 The finished mural was on display Tuesday in downtown Northfield. (Sam Wilmes/Northfield News)

Brett Whitacre, who has engaged in different art mediums during his two-decade career so far, has been in Northfield this week to develop a mural on the west exterior wall of Domino’s. (Sam Wilmes/southernminn.com)

Though work still remained on the mural, Whitacre had made progress on the project as of Thursday morning. (Sam Wilmes/southernminn.com)

The finished mural was on display Tuesday in downtown Northfield. (Sam Wilmes/Northfield News)

The wind whipping all around him, Whitacre wasn’t sure how long he could continue, or whether he would be able to return home the following day. He had fallen behind schedule on the project.

However, Whitacre, who has earned a living through different art mediums over the last two decades, knows his work will be successful in two ways: As an expression of love in downtown Northfield and that that it will serve as a beautiful presence — especially during the winter as snow envelops the city.

The owner of the building, David Aase, approached city staff last year with the idea of creating the mural. Aase had seen Whitacre’s work and wanted him to provide the art.

The concept is floral. The entire space inside the word “Love” features different colors, and everything outside of the spaces within the word is in black and white.

“It’s gotta be interesting,” Whitacre said of his design. “It’s a design choice.”

In creating the piece, Whitacre said he wanted his work to be bright and positive in a way that resonates with the public. His piece could be seen as holding special importance during this time of racial tension and political polarization throughout the U.S.

“It’s even worse when people are shutting their doors,” Whitacre said. “It boils down to on the streets, I like to put up things that are positive. I am in the business of doing murals.”

Northfield Public Library Director Teresa Jensen said Northfield could use more murals and art — particularly within downtown, “where people can see it.”

“Maybe it’s the message of love,” she said of the importance of the piece to the community. “We also think that it’s a landmark for Northfield.”

Along with money being invested by Aase and another person, the city is paying $3,000 for the work. The money comes from a fund generated by 1% of revenue reserved for public art from eligible city capital projects. The revenue has been used for past projects like the art information kiosk downtown. The under-construction roundabout at the intersection of Minnesota Hwy. 246 and Jefferson Parkway will have four murals in the underpasses by next year. And, a sculpture is being installed over a downtown walkway.

A professional artist, Whitacre’s medium has shifted over the years. Approximately 20 years ago, he began as a studio artist. He had always found garage sales and rummaging through older items to be interesting, and at that time people were placing well worn hand-held TVs and hard-shelled luggage into alleys across Chicago.

His breakthrough work was spray painting the back of pieces of glass removed from homes as the city experienced gentrification. Within five years, Whitacre had sold hundreds to thousands of the pieces in art shows.

Then, a few years later, Whitacre became a drummer for Legendary Shack Shakers, a Paducah, Kentucky-based rockabilly/blues band that toured throughout the U.S. and around the world. His journey resulted in a 10-year odyssey and a temporary delay in his work. Still, he drew inspiration from the places he visited, and money he earned through the band, which opened on one tour for former Led Zeppelin lead singer Robert Plant, giving him enough financing to focus full time on his studio work when he returned in 2015.

After rthat  Whitacre continued showing his work at art fairs and established relationships with ongoing customers.

Then, 2½ years ago, Whitacre transitioned into mural projects and started seeing requests once he posted his work in Chicago neighborhoods on Facebook. Since then, he has created murals in Milwaukee, Cookeville, Tennessee, Norwalk, Connecticut, Rockford, Illinois, other Chicago suburbs and the entire side of a 62-foot building in Nashville.

Whitacre enjoys the exposure and “going big with art.” However, he said his Northfield work is unlike any project he has undertaken so far. Floral has become a recent interest for him as he continues to develop as an artist.

“You accidentally do something well, you are going to be asked again,” he said.

“I want ‘Oohs and aahs,’” Whitacre added of what he wants people to say of the mural.