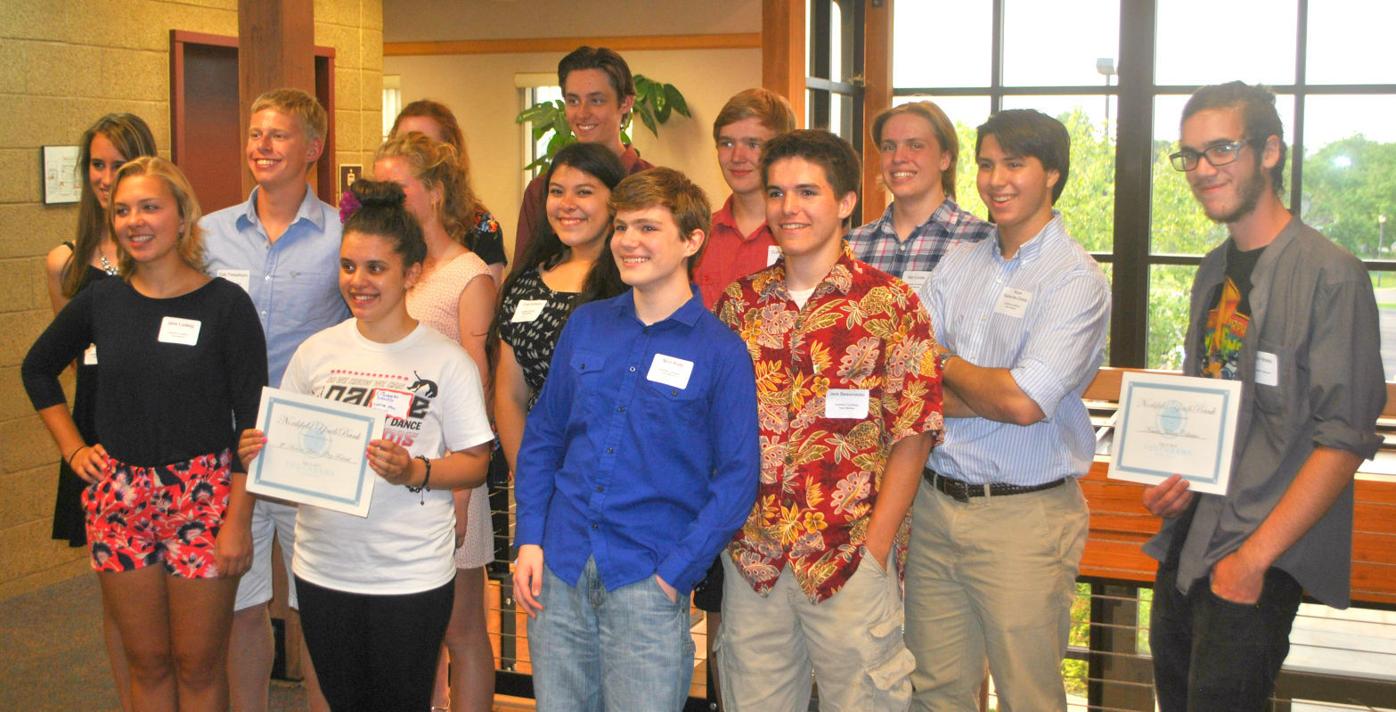 The members of the Northfield Youthbank committee pose with the four grant recipients from the inaugural series of funding. (Kevin Krein/Northfield News) 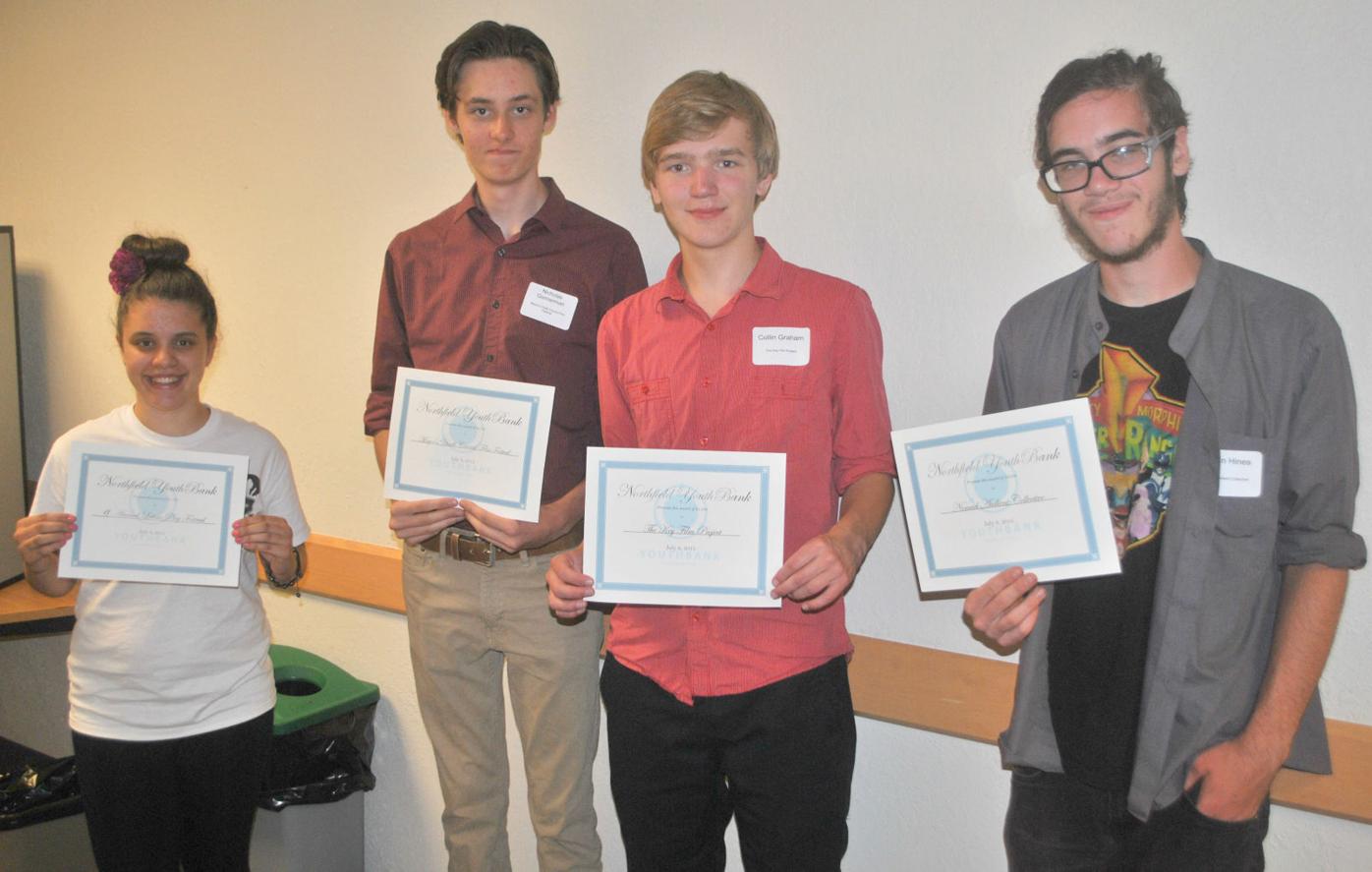 From left to right: Elizabeth Stoufis with the Latino Play Festival, Nicholas Gonnerman with the Mayor’s Youth Council, Collin Graham with the Northfield Union of Youth and Stefan Hines with the Nomad Audient Collective. (Kevin Krein/Northfield News) 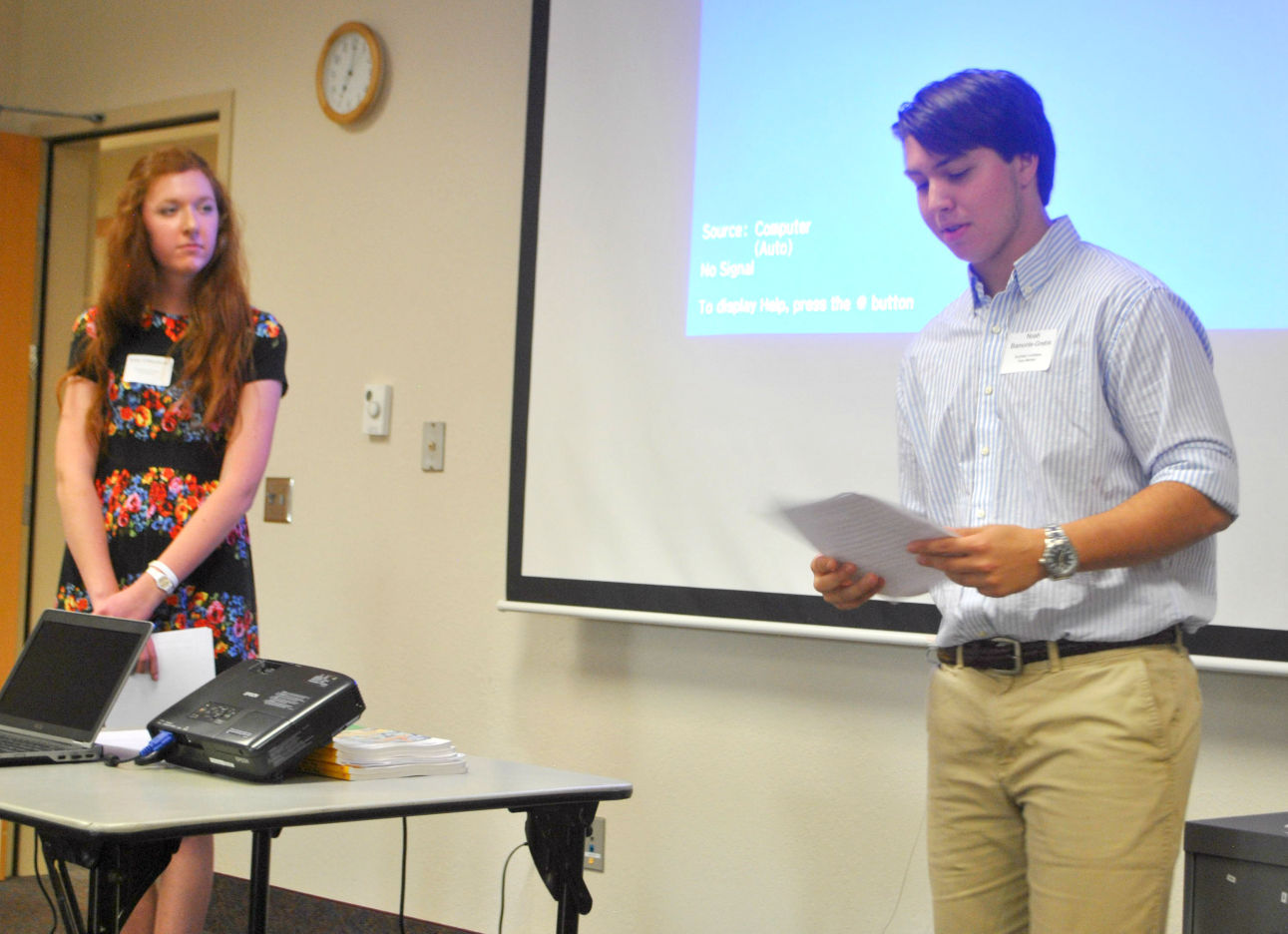 The members of the Northfield Youthbank committee pose with the four grant recipients from the inaugural series of funding. (Kevin Krein/Northfield News)

From left to right: Elizabeth Stoufis with the Latino Play Festival, Nicholas Gonnerman with the Mayor’s Youth Council, Collin Graham with the Northfield Union of Youth and Stefan Hines with the Nomad Audient Collective. (Kevin Krein/Northfield News)

On Thursday evening, the recipients of the inaugural series of Youthbank grants were recognized by their peers, the Northfield Health Community Initiative, as well as members of the Northfield community at large.

Grants were awarded to four youth-oriented projects: $1,500 to the Northfield Union of Youth to put toward the film project “Journey to Neverland,” which tells a fictionalized version of the life of group’s namesake Lindsey Key Perkins; $1,550 to the Sixth Annual Latino Play Festival to underwrite vocal lessons and work with acting coaches; $2,730 to the Northfield Mayor’s Youth Council to organize an outdoor film festival scheduled for the fall; and $3,500 to the Nomad Audient Collective for the cost of portable audio equipment to use for outdoor concerts this summer.

Katy Gilbertson, a member of the Youthbank team, said that each of the groups developed projects that will improve the community in Northfield.

“Youthbank’s tagline is ‘By youth, for youth,’” Gilbertson said. “The grants are written by youth, the projects are led by and designed to help youth, and the applicants awarded the grants are selected by youth.”

Youthbank itself originated in Ireland as a means of getting young people involved in civic engagement. Youthprise, a Minneapolis-based like-minded foundation was interested in bringing the Youthbank concept to the United States. To do that, they partnered with Northfield HCI.

Gilbertson said that the Northfield program is one of eight currently operating in the United States.

“It’s the opportunity for youth to be connected and involved,” she said. “Youthbank gives young people a voice in philanthropy.”

The theme for the first series of grants was youth engagement and arts and entertainment. Noah Bamote-Grebis, another Youthbank team member, explained that representatives tabled at the high school and asked students to respond to the question: “What would make Northfield a better place for youth?”

Bamonte-Grebis said that almost everyone responded “a movie theater.”

“We analyzed the answers and knew we needed to do something with entertainment,” he said.

He said that 11 applicants submitted information for a grants, and that the committee then went through an interview and selection process.

“The final decision was voted upon based on the impact of the project, the value for the money, youth leadership, the quality of the idea and how well it addressed the theme,” he said.

Representing the Union of Youth, also known as The Key, “Journey to Neverland” co-writer and co-director Collin Graham said that film was a chance to raise awareness of The Key, and to let people know more about the story behind the organization.

Elizabeth Stoufis with the Latino Play Festival said that the annual event is a way for minorities in the community to have their voices heard by using the arts. “It’s a chance for us to share our ideas and to overcome injustices,” she said.

Accepting the grant for the Mayor’s Youth Council, Nicholas Gonnerman said that the film festival it is organizing is a chance for local filmmakers to come together and share their work, and that it will also give the larger community a chance to watch those films as well.

Stefan Hines with the Nomad Audient Collective said that the group wanted to put together a project that explored the place of music in Northfield, with the focus being on youth. “We needed to have music for people as a community, and as a free event,” he said.

Youthbank is already planning its fall series of grants, with applications available on September 28. Youthbank team member Audrey Kornkven said that the group is still figuring out the theme for the fall grants, but that applications will be due on October 20, with interviews taking place in November and final decisions on grant recipients in December.

Jack Beaumaster said that the group is already planning fundraising efforts for the next series of grants.

“Youthprise will match every dollar we raise, dollar for dollar,” he said. “If we make $15,000 in donations, they will match that. Our goal is to take advantage of that.”

Beaumaster said that the group is already on its way to raising funds with a $2,000 donation from WINGS and $500 raised during the Northfield Shares city-wide garage sale.

Meleah Follen with HCI is the adult coordinator on the Youthbank project. She said that the youth team members were selected after a call for applicants was advertised at the high school.

On the philanthropic efforts of the young people involved with Youthbank, Folleen said that it helps them broaden their views of the community they live in.

“We spent time looking at the community as a whole,” she said. “This allows them to step outside of their lens and see different parts of the community.”

She also said that this is the opportunity for young people to think strategically about things in the long term.

“An investment today means what in the future,’” Follen said.

Kevin Krein covers arts and entertainment, non-profits, community events and people, and matters relating to Rice County and the surrounding townships for the Northfield News and the Faribault Daily News. You can reach him at 507-645-1106, or follow him on Twitter: @NfldNewsKevin.