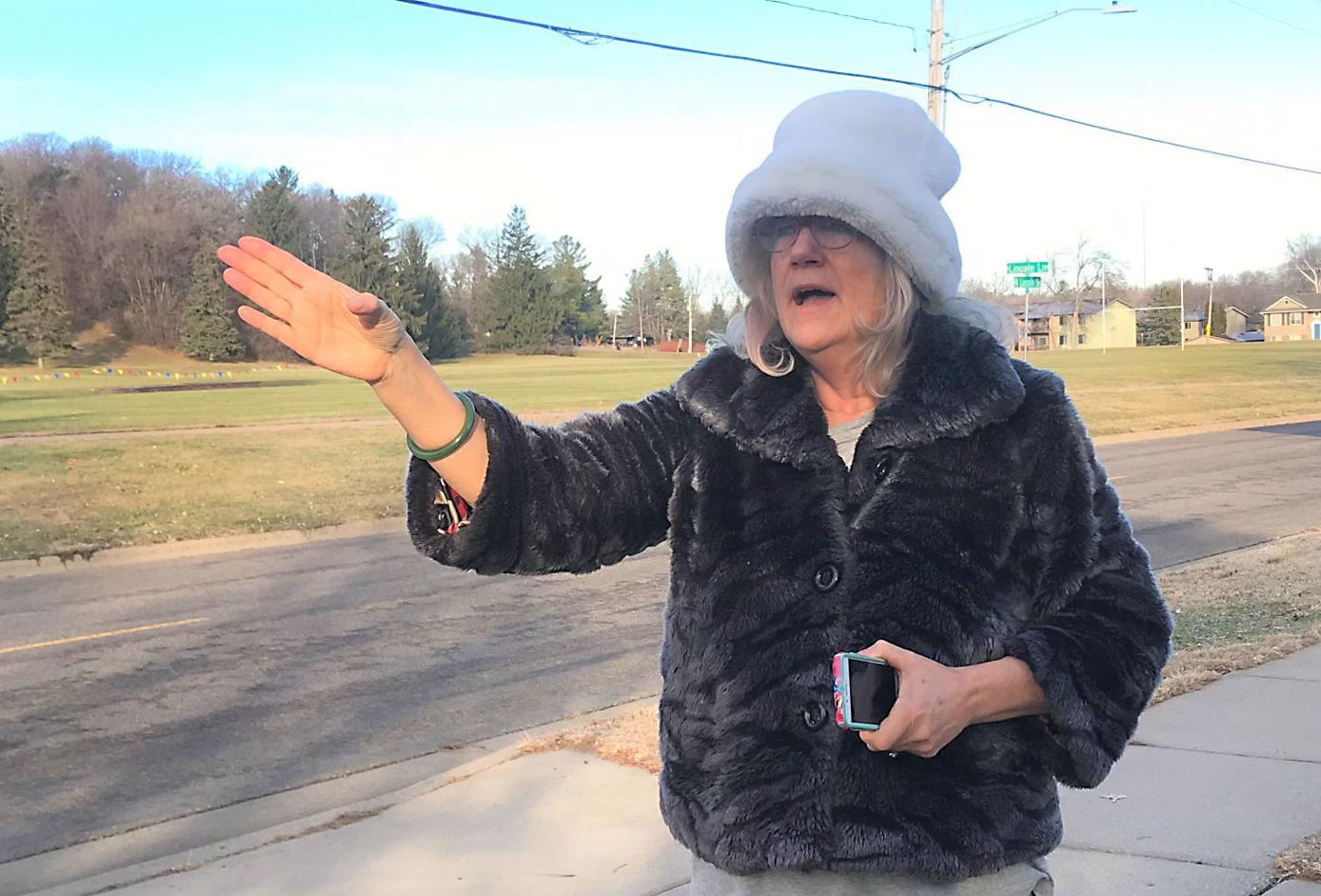 Mattie Lufkin, who lives at the intersection of Lincoln Lane and Lincoln Street, is speaking against a plan to construct 440 St. Olaf residential beds near her house. To her, the plans will adversely impact herself and neighboring residences, an accusation the college denies. (Sam Wilmes/southernminn.com) 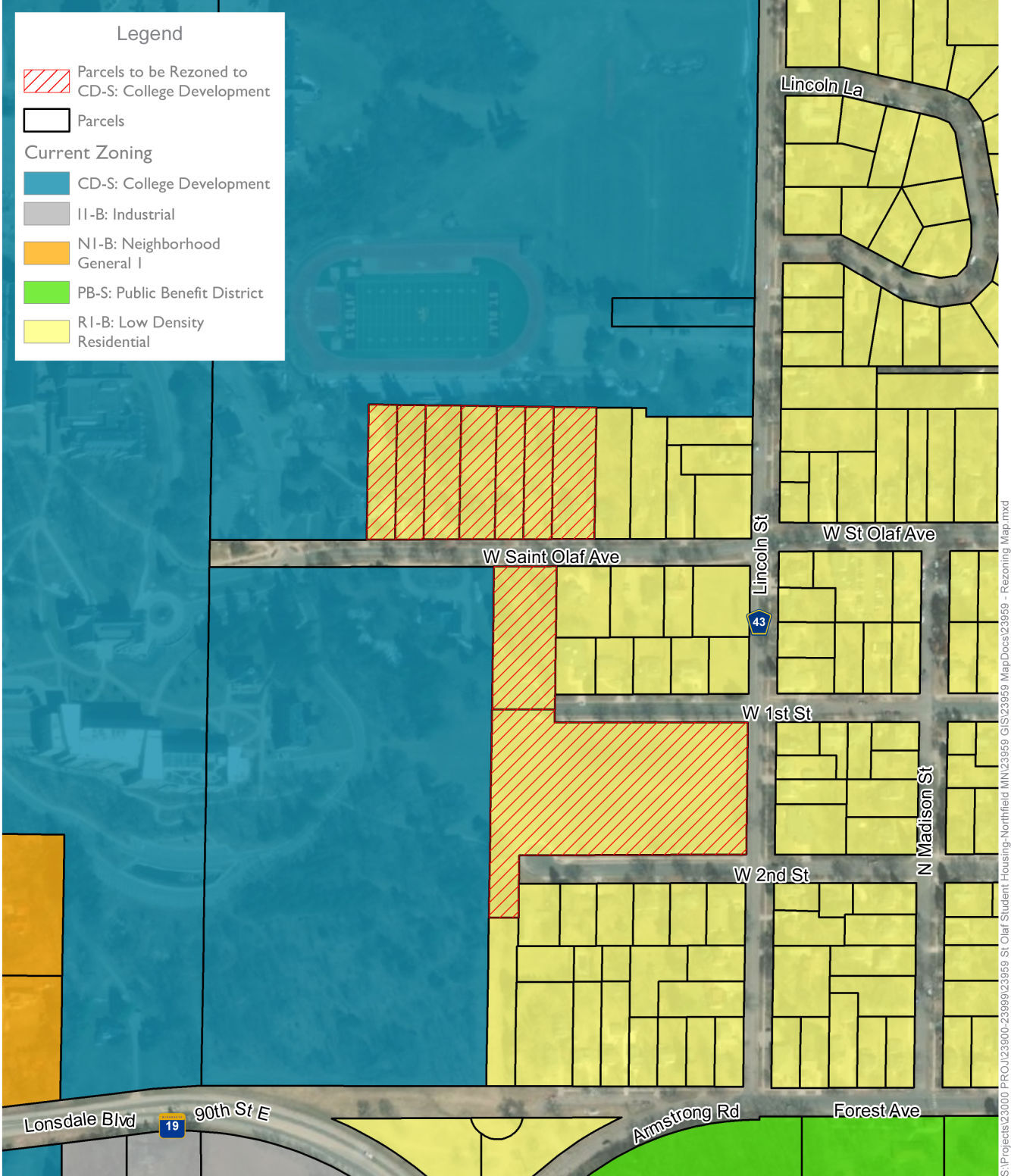 A layout of the proposed development includes the nine parcels, in orange, St. Olaf College wants to convert to college development to enable the construction of a major residential project. (Photo courtesy of the city of Northfield)

Mattie Lufkin, who lives at the intersection of Lincoln Lane and Lincoln Street, is speaking against a plan to construct 440 St. Olaf residential beds near her house. To her, the plans will adversely impact herself and neighboring residences, an accusation the college denies. (Sam Wilmes/southernminn.com)

A layout of the proposed development includes the nine parcels, in orange, St. Olaf College wants to convert to college development to enable the construction of a major residential project. (Photo courtesy of the city of Northfield)

Standing near her home across the street from St. Olaf on a recent cold morning, Mattie Lufkin described the problems she sees with the college’s plan to add housing for 440 students nearby.

Lufkin, who lives on the corner of Lincoln Lane and Lincoln Street, said she and other neighboring property owners are considering whether to move from the area due to their concerns that the project will draw more noise, diesel truck pollution and car traffic to the stretch.

“The work they are proposing to do is going to be extremely disruptive in the neighborhood in many ways,” she said. “It’s simply not sustainable.”

The development includes a 300-bed residential hall designed as four separate houses with interconnected hallways and lounges. Another 140 beds would be added in 14 proposed townhouses along St. Olaf Avenue near the college’s west entrance. All units are intended for college juniors and seniors. The townhouses would replace aging residences, ranging from 78 to more than 110 years old, that the college has acquired over the years.

The more than $60 million development would come on the land west of Lincoln Avenue that used to hold the school’s Honor Houses and the President’s House.

Lufkin said she and other residents who live within 350 feet of the building project have not been notified of the pending project as required. To her, St. Olaf and other colleges neighboring residential areas need to develop property on campus when possible.

“This same group was also provided mailed public meeting notices by the city of Northfield,” she said. “For both the invitations and the notices, geographical information system data from the Rice County Coordinate System was used to determine properties within 350 feet of the St. Olaf student housing project.”

Hanson has noted the college explored alternative sites for the development but wants any expansion to occur on “The Hill,” and use existing infrastructure. According to officials, any development will be done with cognizance of the existing character of the area. Rain gardens are expected to be installed with the townhomes.

Public comments on the project have been mixed. Prior to a Dec. 1 City Council meeting, St. Olaf Avenue residents Greg Kneser and Sandy Kimmes spoke against the additional parking. Kneser, who served as the college’s dean of student life for nearly decades, said he’s “very concerned” about the possible increase in vehicle traffic on the stretch with the pre-existing number of non-motorists who utilize the area.

Paul Jackson said though he supports the rezoning and conditional use permits, he did not support additional parking due to its perceived adverse impact on the city’s recently adopted Climate Action Plan.

Current plans do not call for the development of the popular sledding hill in front of Old Main, but do include the rezoning of the field at the bottom of the hill to college development.

Nearby residents Karen Saxe and Peter Webb said they favor only rezoning land north of First Street West and not the field at the bottom of Old Main. To them, not rezoning the field would lessen any perception that St. Olaf is encroaching into residential areas to the east of campus.

Northfielder Toby Barksdale is concerned that rezoning the rugby field by First, Second and Linden streets to college development would “open the possibility of surprise development in the future.”

Project plans move ahead with questions

The St. Olaf Board of Regents approved the project in January. The project was temporarily paused in May due to financial uncertainty wrought by COVID-19. Plans call for construction to start next year, and occupancy by fall 2022.

The Northfield Planning Commission last month recommended the City Council approve the project’s conditional use permit and rezone nine parcels on the north and south sides of West St. Olaf Avenue to allow for the project to take place. However, the Planning Commission rejected the addition of more than 180 parking stalls north of the proposed development, an increase the college said was needed for overflow student and event parking.

The council approved the first reading of the proposed zoning changes Tuesday, Dec. 1.

According to the college, the development would enable at least 100 students who are living off campus to move back. In the process, St. Olaf students say poor student behavior reported off campus would be reduced and the college would become more competitive in pursuing students seeking an on-campus residential experience. St. Olaf officials say the facilities will also allow for expanded summer conferencing.

Despite approving the measure, Planning Commissioner Betsey Buckheit said “the serious issue” she sees with the project is that St Olaf was seemingly trying to force the city’s hand by having already bought the properties they were seeking to change through zoning. She added she wants Northfield and St. Olaf to establish where the college’s boundary ends to provide neighbors a clear understanding.

To Hanson, the college is not encroaching on surrounding neighborhoods.

“This project brings students closer to campus than where they’re currently living in honor houses or in community rental units,” she said. “The college is not purchasing any property for the project; it’s being built on property that we already own. The project, as proposed, includes a green buffer area almost a block long between the project and Lincoln Street.”

The majority of the school’s residence halls were built between 1956-63. However, Olson noted the college has faced a shortage of more than 400 on-campus beds since the 1990s as enrollment has outpaced residential development. To combat the shortage, St. Olaf has sometimes had up to three students living in the same room and allowed several hundred to live off campus. According to the college, the project is also needed for St. Olaf to compete in recruiting students to campus.

“The project is being planned with sustainability as a prominent feature, along with pedestrian safety, stormwater best practices, and high-quality landscaping to integrate with the existing campus and provide park-like, pedestrian-friendly buffering to the adjacent single-family residences,” Hanson said.

“The work they are proposing to do is going to be extremely disruptive in the neighborhood in many ways,” Lufkin said.