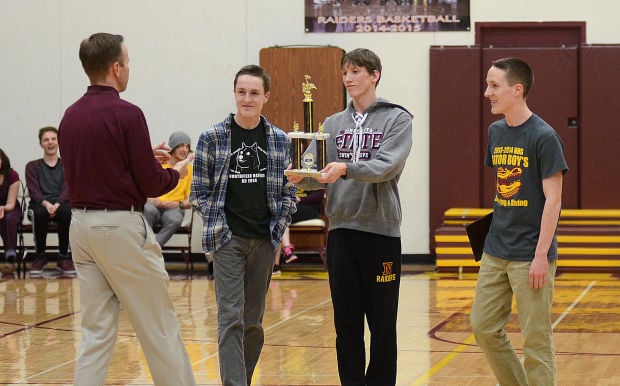 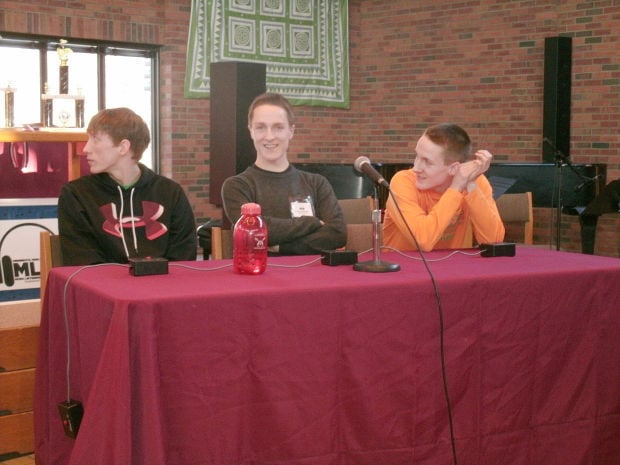 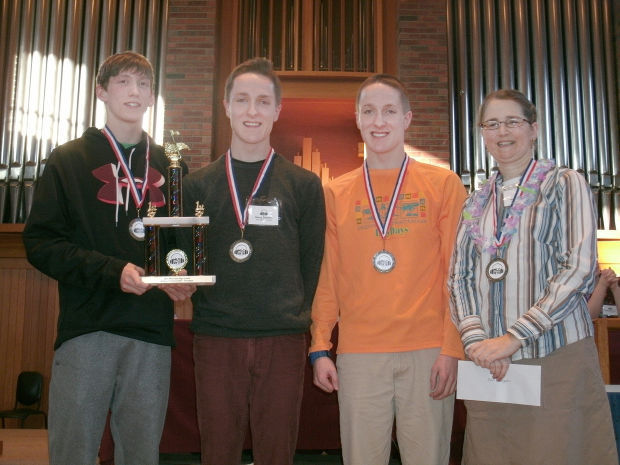 Nicholas Pelletier, and Henry and William Beimers, along with coach Karen Madsen hold the first-place trophy for winning the 2015 Minnesota Music Listening Contest State Championships on Feb. 6 at Gustavus Adolphus College. It was the third consecutive title for the trio.(Submitted photo)

Nicholas Pelletier, and Henry and William Beimers, along with coach Karen Madsen hold the first-place trophy for winning the 2015 Minnesota Music Listening Contest State Championships on Feb. 6 at Gustavus Adolphus College. It was the third consecutive title for the trio.(Submitted photo)

A trio of Northfield High School students has shown that listening really does pay off.

Though, it isn’t just the art of listening that William Beimers, Henry Beimers and Nicholas Pelletier have used to win the past three Minnesota Music Listening Contest State Championships.

On Feb. 6, the three NHS seniors competed in the state competition, held at Augsburg College, and took home their third consecutive championship to cap off a four-year dynasty. As freshman in 2012, they placed fourth.

“They are all very interested in music, how it works,” NHS coach Karen Madsen said. “They’re analytical kids, that makes a difference. That’s the kind of kids who do well at this.”

In music listening competitions (which consists of regions and state) students are given three CDs of music and a workbook to study at the start of the season. Primarily Western Classical music, each year features a different global genre, instrument and a composer too. This year it was music from the state of Hawaii, guitar and Handel.

From there, competitions consist of five rounds: two purely listening, two with written components and one mystery listening round.

Written rounds contain questions such as: When was the piece written and Who was it dedicated too? These rounds require considerable historical knowledge of the music covered.

“They have to know composer’s styles,” Madsen said.

This year’s NHS team included 10 students to make up three teams and one alternate. Each team competed at the region contest. The top two overall finishers at regions qualify for state, though only one team per school is allowed. Northfield teams placed first, third and fifth out at 17 at the 2015 Region Contest.

“Most kids (on the team) are fairly serious about music and most kids stay in it once they start,” Madsen said.

The team starts meeting for practices at the end of September and Madsen holds a practice competition once a week to prepare the students for competition.

“Every Friday we have a practice contest… so there were no surprises (come competition),” said Henry Beimers, “I think that’s a reason Northfield does so well, because we do that every week, so we have experience.

“The biggest part is just listening to your music and reading the book and knowing the information. Our coach helped us a lot.”

“She really helps us, we have a really strong coach,” William Beimers said. “It’s a lot of fun, learning and expanding knowledge.”

This is only the second time in the contest’s 25-year history that a school has had three-peat champions.

“It’s really amazing to win,” William Beimers said. “Every year, I’m always afraid there’s going to be someone better and that keeps me motivated.”

While the Beimers twins are involved in band, orchestra and tentatively plan to be active in and study music next year in college, it was at the urging of Pelletier that they joined the music listening team.

“Nicholas sort of brought the idea to my attention in ninth grade,” Henry Beimers said. “So we went to the informational meeting and ended up forming a team.”

Two weeks earlier, at the U of M, all three of Northfield’s teams participated in regions. Northfield’s teams came in first, third, and fifth out of 17 teams, with all three scoring in the top 10 percent of all teams in the state. Team 1 (Beimers, Beimers, Pelletier) scored 97/100 at regions. Second place went to Roseville Area High School with a score of 92/100.