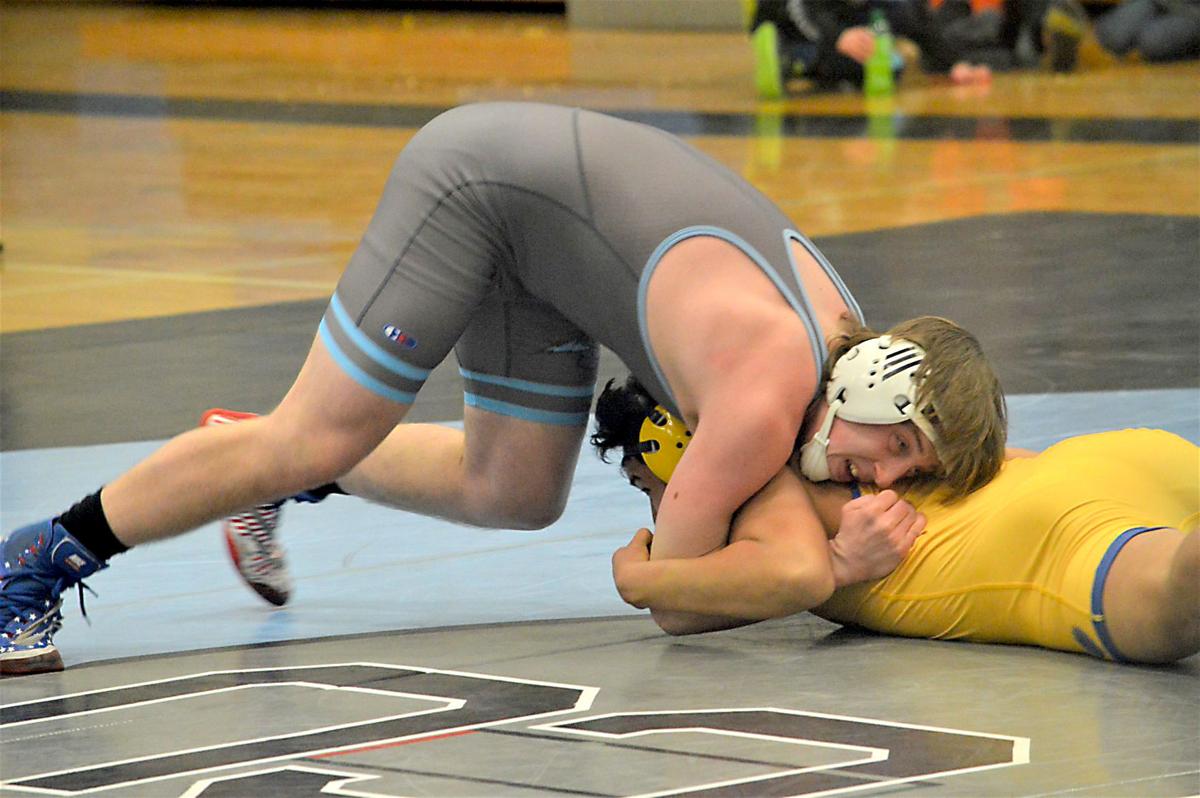 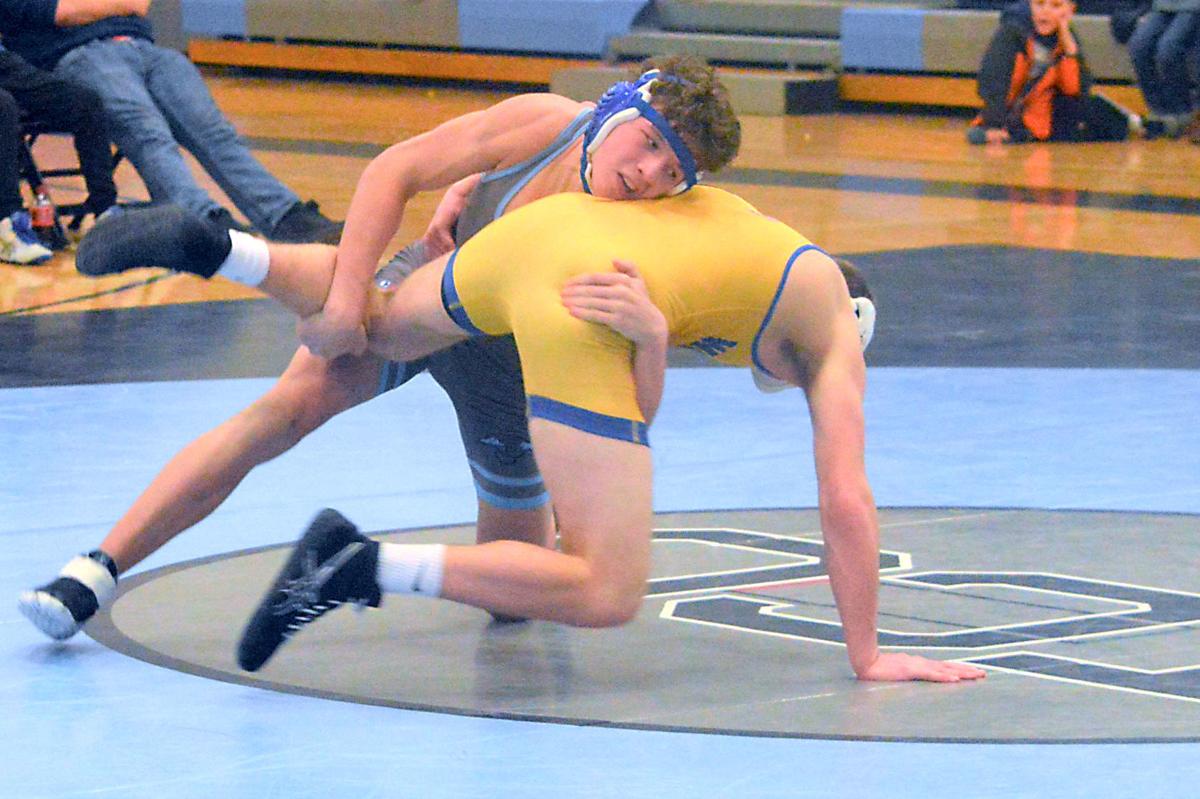 Caden O’Malley chipped in six points for the Titans after holding his opponent’s back to the ground. (Carson Hughes/Le Sueur County News) 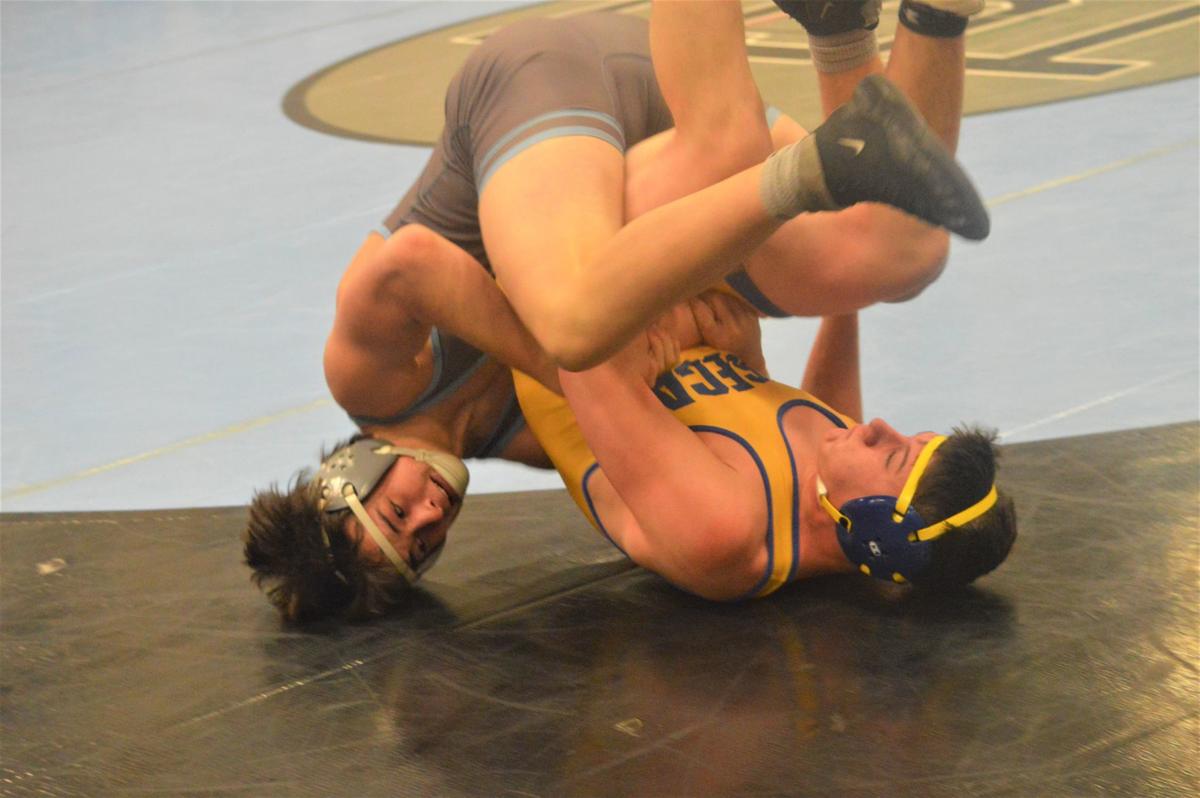 Riley O’Malley flips over his opponent. O’Malley was tied up in a long match with his Waseca opponent, but after collecting a 16-1 lead, O’Malley brought his opponent down in a technical fall to earn five points for the Titans. (Carson Hughes/Le Sueur County News)

The No. 3 seeded Tri-City United boys wrestling team (18-5) claimed their first victory Thursday on what they hope is the road to the state tournament.

Waseca, seeded No. 6, put up a tough fight at the start, but the Titans triumphed 54-17 at TCU in Montgomery.

“They didn’t have any quit in them,” said TCU coach Shaun Timmerman on the team’s performance. “It’s conditioning, it’s work ethic, knowing that you’re going to have to get in there for six minutes as hard as you can and wear the guy out.”

The boys were in high spirits after a successful start to the section, and despite the score, Waseca wasn’t an easy team to beat. The Bluejays had an 11-2 record and kept the meet tight over the first five matches, and at one point, led the Titans 11-10.

TCU soon gained the edge, and a series of eight consecutive victories launched the Titans from nipping at Waseca’s heels to being too far ahead for the Bluejays to catch up. It was a meet where everyone was pulling their own weight.

“I think we’ve worked really hard day-in and day-out,” said Brody Rud. “Nobody is ever quitting on the mat.”

At 170 pounds, Rud turned out a solid performance for the Titans, pinning his Waseca opponent to chip in six points for the team. Coming off the win, he set his sights on the state tournament.”

Rud wasn’t the only one with confidence in the team’s prospects. TCU Coach Paul Norgren wasn’t willing to accept anything less than qualifying for state.

“Everyone’s got each other’s backs, and it’s become second nature to keep working harder and to keep improving,” Norgren said.

The Titans next section match is against No. 2 seeded Hutchinson at 4 p.m. Saturday, Feb. 15 at Mankato West High School. Defeating Hutchinson would bring TCU to the final round of section where the winner would go on to compete at the state tournament.

“We put in the work for it,” said Timmerman. “Now we just got to wrestle.”