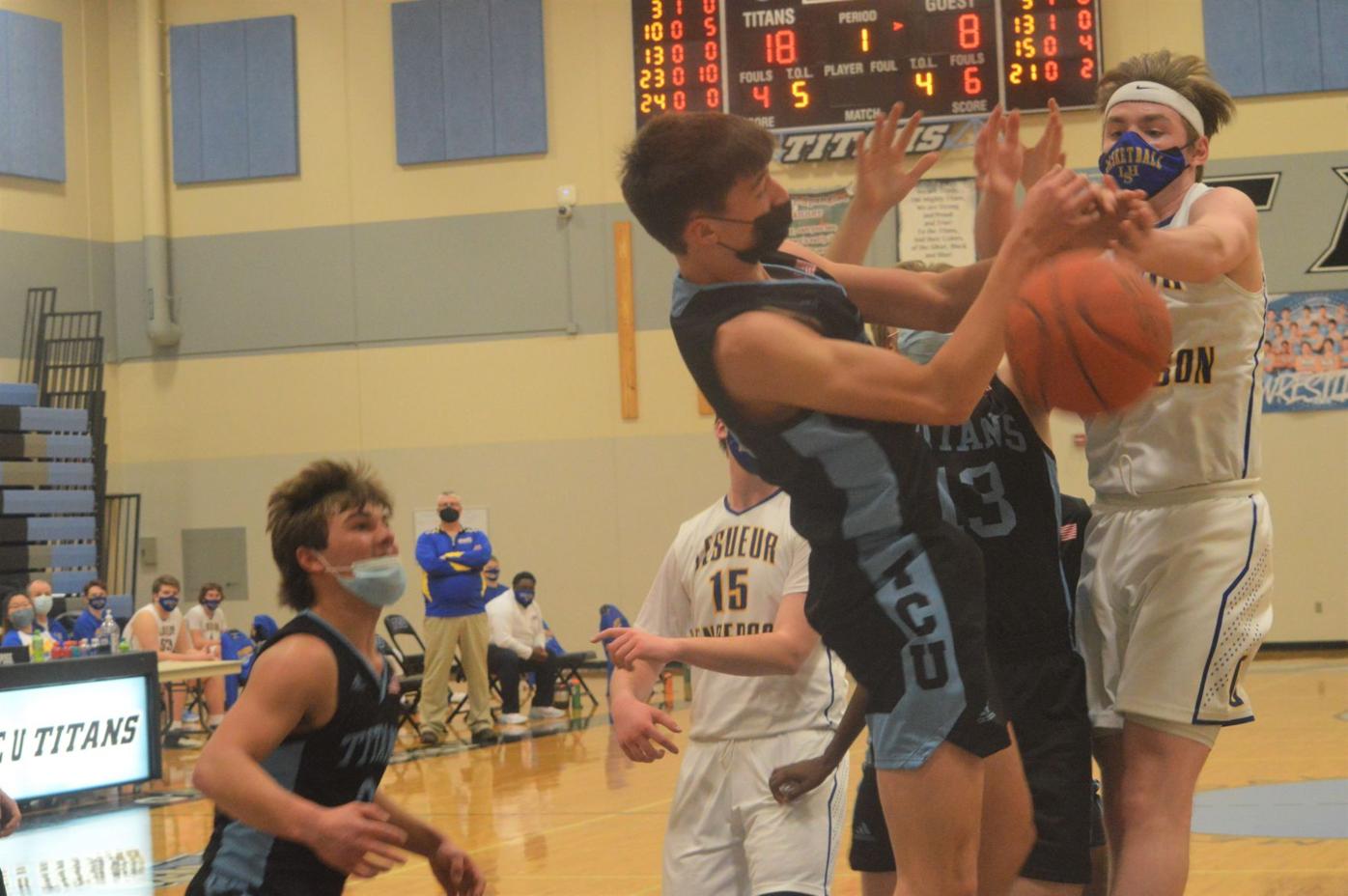 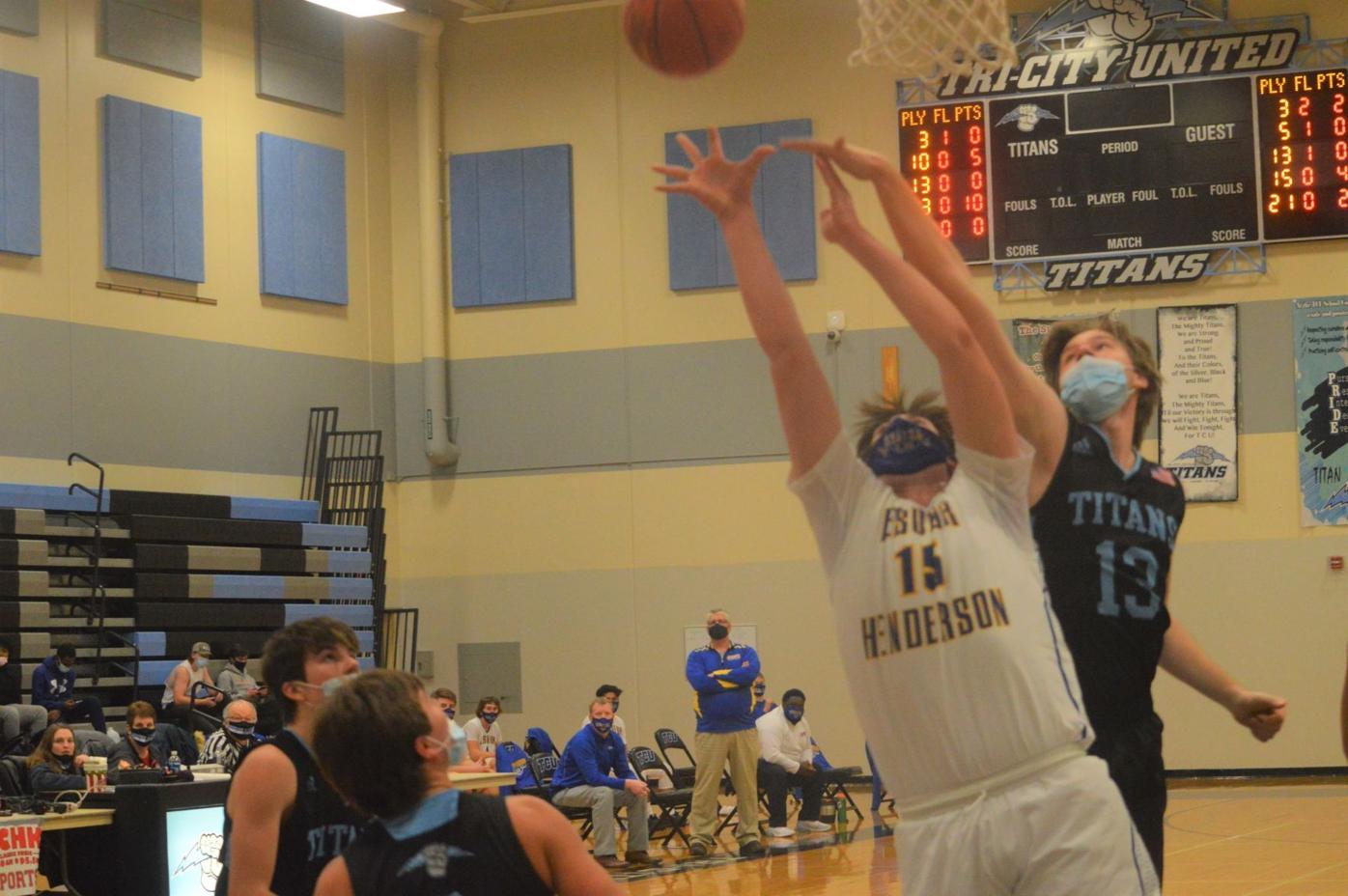 The Tri-City United boys basketball team took home a win over Le Sueur-Henderson on Saturday, but the game was much closer than the Titans wanted. After carrying a consistent lead over the Giants, the Titans fell within just two points of being overtaken by LS-H at the end of the game. In a last minute battle, the Titans ultimately won 54-51.

The Titans got the upper hand early with a stealthy offense. Once the Titans reached the opposing side, the team handed the ball off to Fakourou Tandia, who continued his record as one of the Titans' best scorers. Adept at finding opportunities for an inside shot, Tandia led the Titans with  19 points, 15 in the first half.

With those early shots, the Titans put eight points on the board before the Giants scored and held leads as large as 10 points. But the Titans had trouble maintaining those leads as the Giants found ways to break through TCU’s defenses.

Lukas Graff was unafraid to use his physical size to pressure his way into an inside shot and led the Giants with 13 points. Zach Berndt was another major contributor, earning two three-point field goals in the first half and six points total.

“Graff just attacked the rim over and over,” said Le Sueur-Henderson Coach Robert Steiger. “David Gupton just played his rear end off trying to defend Tandia. In the second half, Tandia really struggled to score because of that Zach Berndt was just steady the entire day.”

The Giants soon proved themselves a match for the Titans and whittled down TCU’s lead 26-23. The game was anyone’s to win and both teams knew it, making for a hard-fought second half filled with aggressive play.

Every point mattered as the Titans fought to defend their lead. Adam Henze stood as a top scorer for the Titans with 10 points including two three-point field goals. Jonathan Hurd and Matthew Rabenberg ramped up the pressure and put in five points each. Mason Vosejpka and Reggie Vosejpka collected seven and six points respectively.

For a while, the Titans’ lead seemed fairly secure, but the Giants clawed their way back into the competition as the clock wound down. Nathan Gregersen was a major standout, collecting 10 points including a three point field goal. David Gupton put in six while Gage Bishop and Lane Maus produced five each.

With just a minute left on the clock, the Giants nearly erased the Titans’ head start, placing the score at 53-49. The Giants then picked up a field goal, whittling the score down to 53-51. The game turned physical, creating numerous free throw attempts for either team to clinch the win.

“We knew we just had to put unbelievable pressure on them and to get the steal in-between the trap we had to get a foul and they struggled from the free throw line,” said Steiger. “So any time we got a steal we had to attack the rim.”

Hank Holicky of TCU had four free throw opportunities and three misses. But one point at the end was just enough to raise the score 54-51 and force the Giants to pick up a three point field goal with less than 30 seconds remaining. The Giants took their shot, but missed. The Titans scrambled to time out the Giants and pass the ball to the opposite end of the court. The buzzer ran out with the ball in the Titans’ hands earning them the victory.

“Our defense was good enough to at least hold them off towards the end,” said TCU Coach Kyle Johnson. “They made a run, they made a push and we knew they were going to, but it ended when it ended. I’m glad there wasn’t another five minutes in the game.”

“I’m somewhat relieved,” said Johnson. “I’m not super thrilled, but you have to be happy with a win. They came back. We beat them earlier in the year by 17 or so and we shot the ball well back then. That wasn’t the case tonight.”

“We’re competing better, we’re defending better,” said Steiger. “Now it’s taking care of the little things. When you’re playing a game like that you need a rebound, you need a free throw. You come off the screen and you don’t fight hard enough or you miss a teammate that’s open, those are the little things for us to compete that we’re going to have to start improving on.”