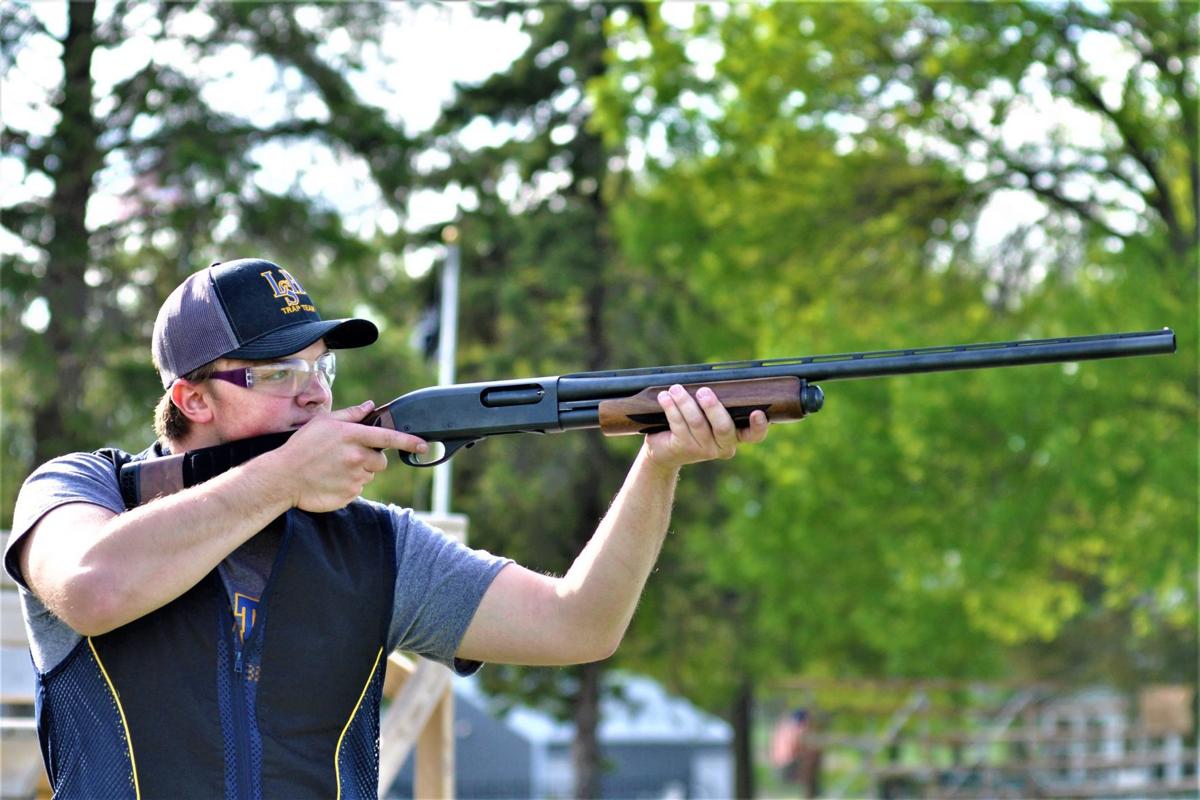 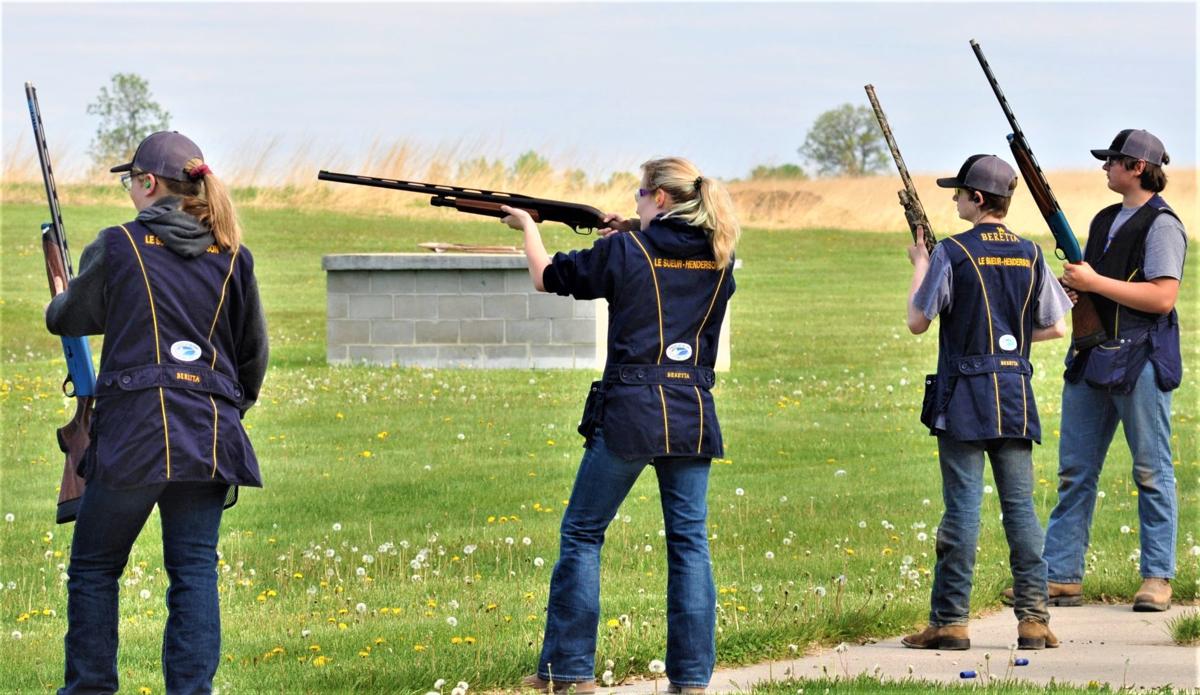 The sounds of shotguns from a high school trap shooting team rang out for the first time this year.

The Minnesota State High League canceled spring sports. But trap shooting, which is a club sport not sanctioned by the MSHSL, is allowed. By that logic, it’s the only high school sport in Minnesota that a team could could participate in this spring. And because shooting is allowed on Sundays, it probably would never become a high school sport, as MSHSL does not allow practices on Sunday.

Although it was delayed, the Le Sueur-Henderson Giants finally hit the range for their first practice Tuesday, May 19 at Caribou Gun Club in Le Sueur. LS-H School District Activities Director Jeff Christ gave the go-ahead on May 15 for the team to practice. A signup was held over the weekend.

Caribou normally hosts four schools (LS-H, St. Peter, Cleveland and Belle Plaine) with more than 200 shooters for regular practices each spring from March until June Sunday, Monday, Tuesday and Wednesday. They also come out on their own and shoot other days. Those other schools have decided not to have a season. At least one other area team, Jordan, has decided to have a season.

It has taken some work to adjust to the new system.

“Usually it’s very organized,” McConnell said. “We start here every single week. We decided it was safe to start tonight, and we’re going to proceed until the 24th. We lost five or six kids who backed out. Everybody else decided to stay.”

The first team this year at Caribou, the Giants split their 41 players up into four groups, two on each day May 19-20. Ninth- through 12th-graders practiced May 19, and sixth- through eighth-graders shot on May 20. Shots were fired from three, five-person stations with four shooters in each, separated by 6 feet. They each took 25 shots from two of stations for a total of 50.

“We were following the stay-at-home order, and we put together a social distancing plan (6 feet apart) and presented it to the district,” head coach Deanna McConnell. “Usually we have all the kids here at one time, and we separated it into four groups on two days.”

Practices and meets will continue for six weeks at Caribou. The regular season was supposed to end May 19, but the Minnesota State High School Clay Target League extended the season to the end of June. The state and national tournaments in Alexandria and Michigan at the end of the year have been cancelled because of the number of teams that attend. And the Giants won’t have an awards picnic to wrap up the season, although awards will be given.

“At Alexandria, there is a minimum of a thousand kids shooting per day,” McConnell said. “Then there’s parents, siblings and grandparents, so it’s too many.”

“We’re allowed to participate because it’s only one team at a house at a time,” McConnell said. “We’re just starting with a practice to get our feet wet and make sure everybody is following the rules and then we have until June 24 when is the very last day that I can submit scores.”

The Giants will shoot once a week over two days, Tuesdays and Wednesdays, until June 24. Five weeks count for competition. Normally they get four weeks of practice before the first meet, but this year they get one week.

“We don’t get to do it as a team because everybody is so separated,” McConnell said. “I like to get the kids together to build that comradery. And the tournaments, that’s what you work for all season to show your work at the end of the year.”

Results are tabulated virtually as teams shoot only at home and exchange scores with other teams on line.

Joel Berglund, one of three seniors on the team, is especially happy that he got a second chance to end his high school sports career, while other sports missed their spring season.

“I’m grateful that it wasn’t gouged out by all the COVID and everything else,” Berglund said. “And especially with this sport where there’s no close contact or anything like that. Either way we have to stay apart when we’re on the line.”

With shooting ranges among the businesses closed by the governor’s order from March 17 to April 17 because of the virus, Berglund said they missed the build up to the season.

“They were shutting things down,” Berglund said. “Oh, shoot, now I’m never going to shoot at the regular time any more.”

But now he gets a second chance.

“If it is delayed like this back into the summertime, it’s good for me because then I still get a chance to shoot for my senior year,” Berglund said.

In his third year on the team, Berglund also ran cross country and played golf, so he missed two spring sports.

Besides the first team practice, Berglund did get in a few other times practicing on his own at Caribou.

“I like that I can get outside and usually in the fresh air,” Berglund said.

This year instead of a spring sport, it has become more of a summer sport, running after school ends. So the weather should be warmer. Sometimes it’s cold and rainy in the spring.

“There’s been times when we’ve been out here in snow pants and freezing,” McConnell said.

Berglund is mostly a target shooter, but he also has tried archery deer hunting, and he plans to venture into duck, geese and pheasant hunting.

As far as his career, Berglund said he’s got a job lined up in an electrician apprenticeship training program at Sibley Electric in Gaylord.

The other seniors are Reid Johnston and Emma Johnston.

The school does not provide funding for the sport. It is supported by fundraisers, sponsors and registration fees ($150 per player). Players sold raffle tickets this year for guns, a gun safe and accessories. Coaches are all volunteers.

Head coaching the team since the sport started in nine years ago, McConnell said, “I’m pretty excited about getting the season started.”

McConnell gained a big passion for shooting when her son, Justin, showed an interest in the sport. He graduated last year, but she’s continued coaching.

“My son did not want to play traditional sports,” McConnell said. “This is offered to boys and girls, everybody plays, nobody sits on the bench. They’re on a team, but they can excel individually as well.

McConnell also thinks the Giants have a good future with eight strong juniors returning next season.

“We’re thinking about investing in a laser shooting simulator for $4,000, so the kids can shoot year round,” McConnell said. “