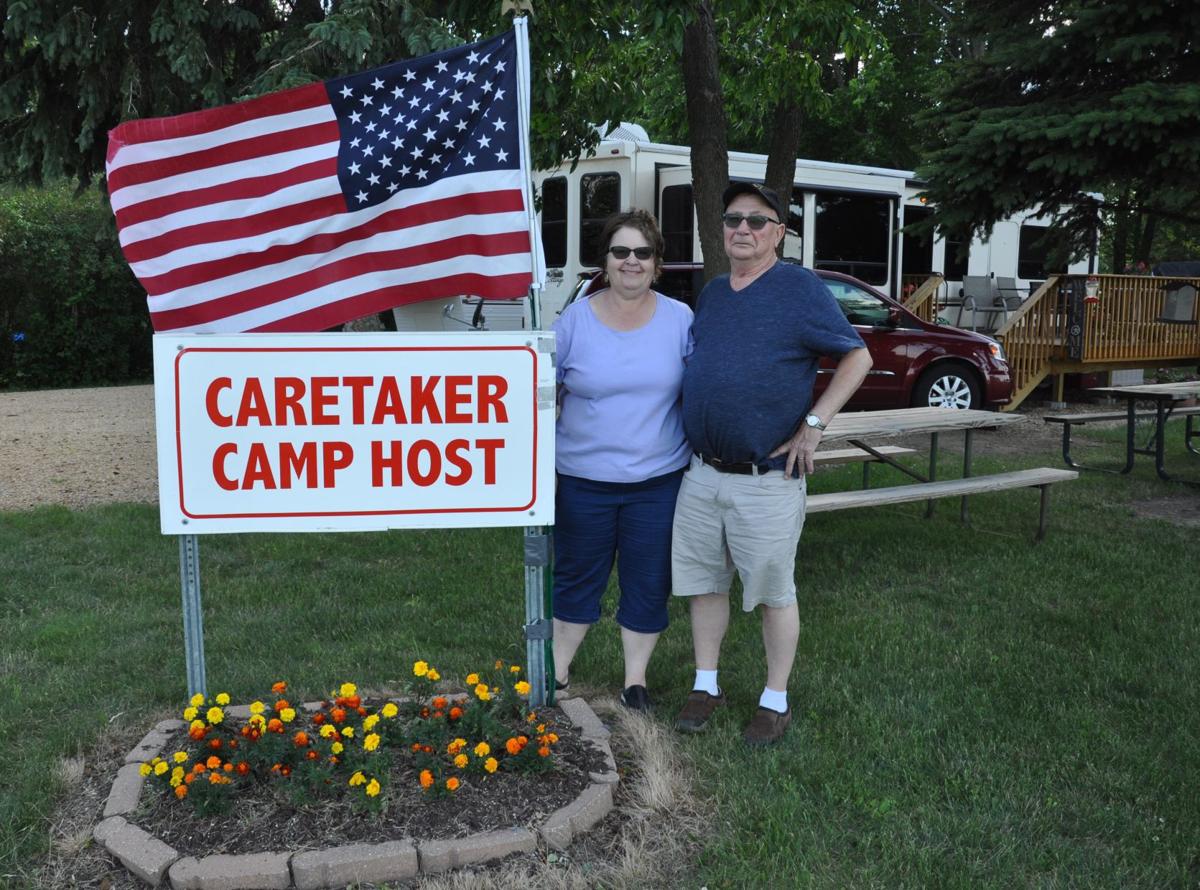 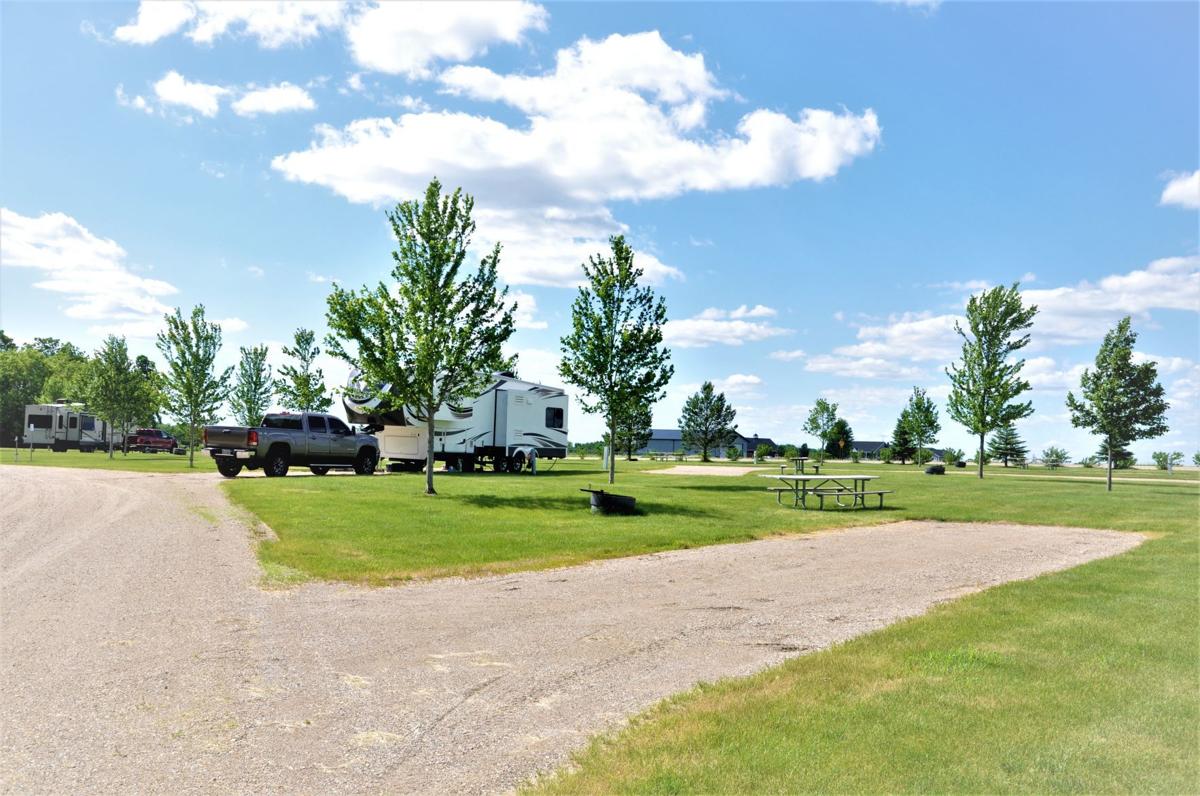 Lake Washington Campground has 31 electric sites and four tent camping sites with all having a gravel pads, a picnic table and a fire pit. 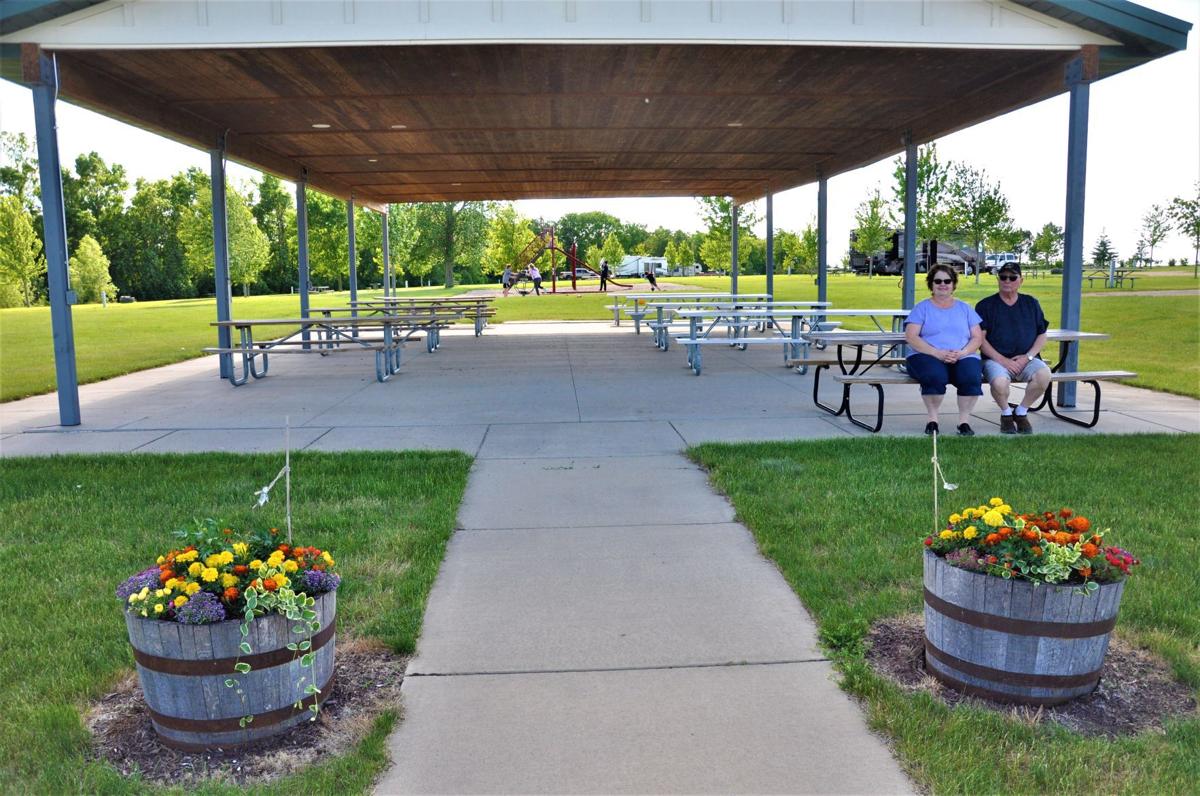 Camp caretakers Sue and Tom Holicky take a break in the picnic shelter at Washington Regional Park and Campground. They planted the flowers. In the background is one of two playgrounds. 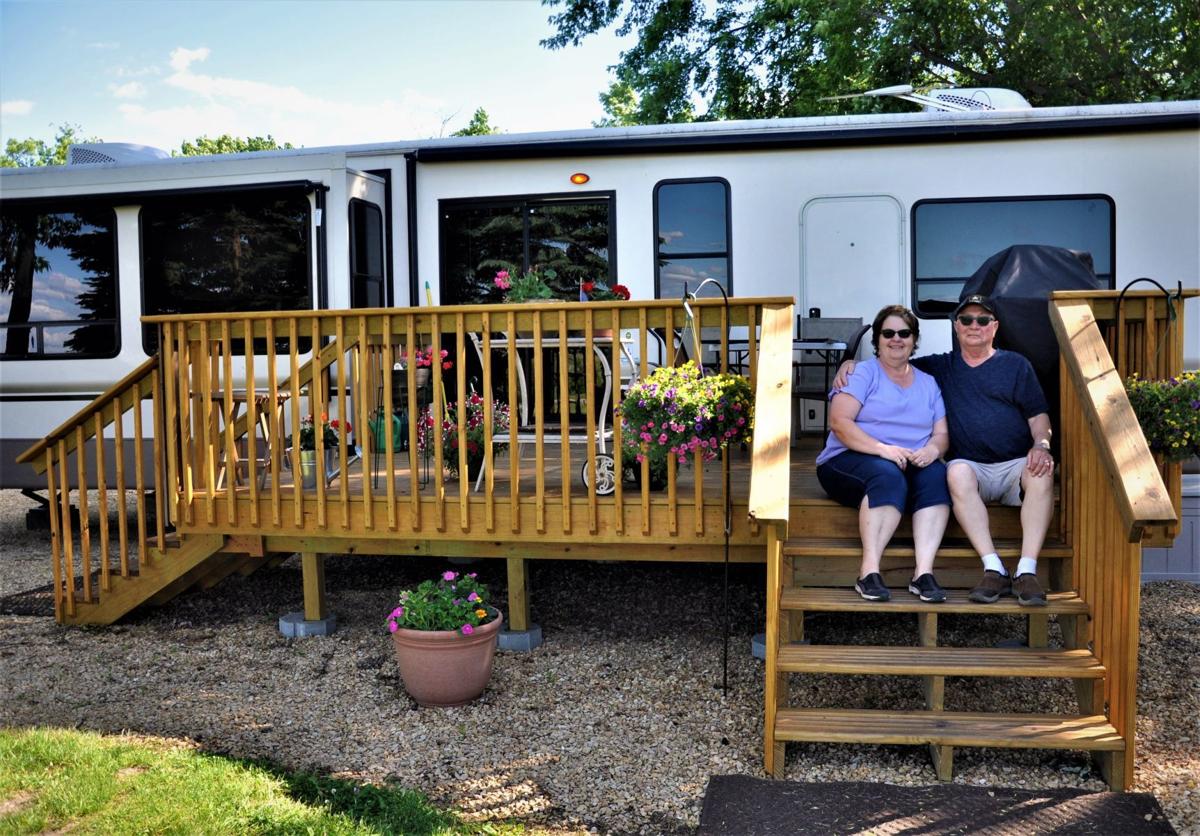 Camp caretakers Sue and Tom Holicky of Le Center spend their summers in their recreational vehicle at Lake Washington Regional Park and Campground. 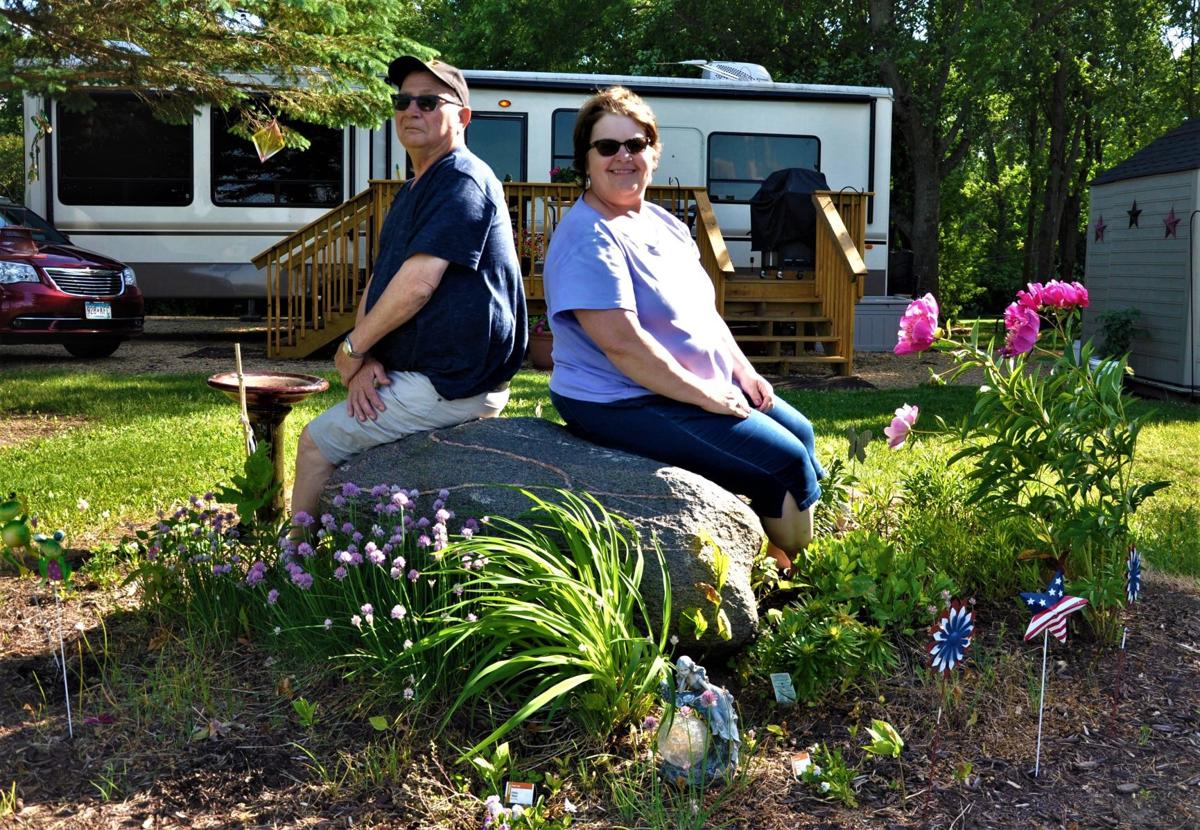 Lake Washington Campground has 31 electric sites and four tent camping sites with all having a gravel pads, a picnic table and a fire pit.

Camp caretakers Sue and Tom Holicky take a break in the picnic shelter at Washington Regional Park and Campground. They planted the flowers. In the background is one of two playgrounds.

Camp caretakers Sue and Tom Holicky of Le Center spend their summers in their recreational vehicle at Lake Washington Regional Park and Campground.

Sue and Tom Holicky, of Le Center, have made Lake Washington Regional Park and Campground in Kasota their summer home for the last six years.

As caretakers, they live in their camper April through October taking care of the 31 camping sites that have electricity for recreational vehicles (motor homes, travel trailers) and the four tent camping sites along the woods. Every year, they have seen increases in business. This year, people were again itching to go camping, but the season was delayed by two months, due to the COVID-19 pandemic.

“We always try to beat what we’re done the year before,” Sue said. “This year it’s going to be tougher because we lost two months right off the bat. We had a lot of reservations that we had to cancel the last two months. Camping is becoming a big thing right now, though, because since all this happened with COVID, people are afraid to fly, and they’re afraid of hotel rooms. Camper dealers are really having a really good year selling.”

Since opening June 1, the campground has been completely full the first four weekends.

“I’m expecting to be completely full in June,” Sue said. “On Fourth of July, we are full, and then we have openings in July, August and September.”

During the opening weekend, Sue noted, “People seemed so happy, because they could get out after being stuck inside all winter. They just enjoyed the nice weekend. People were just quite bubbly and happy to get out amongst others.”

Some changes have been made in light of the pandemic virus.

Campers used to sign in by walking into the office, which is the Holicky’s camper. Now, they take reservations over the phone.

“They can come to the end of the camper here and call me,” Sue said. “Or we can talk to them from the deck or driveway. The signs say stop and call if they want reservations, ice or wood.”

In addition, “Normally we have the shower house for showers and toilets, but that is closed for this moment. Now, everything needs to be sanitized after use, and that’s not feasible with so much different traffic. We’re waiting to see what the governor has to say and our boss has to say.”

A Porta Potty has been added in the parking lot, besides all the self-contained units which have showers and bathrooms.

There are also two playgrounds in the campground, which are open to the public. But people are encouraged to practice social distancing of 6 feet, to bring their own sanitizer, and to do their own wiping.

“We’re not expected to clean up after everybody,” Sue said.

The Holicys not only are caretakers, they’re groundskeepers.

They like to keep the park looking nice, cleaned and all mowed up.

“We’ve done a lot of cleanup out here,” Sue said. “We have trimmed trees, so they can mow along them. People have said how much nicer this park looks. And I like planting flowers around the buildings by the driveway and around the community building, which is rented out for parties, and the picnic shelter.”

In an effort to open the campground to more people, it is not open to seasonal camping. It is only considered a weekend or short term camping place.

The majority of people are weekend campers.

“If it’s seasonal, people want to build a deck and build stuff under the deck and around the camper and plant flowers, and sometimes they don’t get taken care of,” Sue said. “We don’t want that. They come and go here.”

She added, “We have a lot of people come up here to get away for the weekend and get out the city. We get people coming out during the week, more seniors citizens who are offered a discount from Sunday night through Thursday night. Then we have people who come out a week or two at a time.”

Now retired, the Holickys have been camping since they started with their children. They also have a guest camper for their three children, eight grandchildren, and friends to use.

“We first started out with a tent,” Sue said. “Then we went to a camper over the back of truck. Then we went to a pull type trailer. Through the years, this is our fifth new camper, a park model like you put on the lake and leave there.”

The Holickys both enjoy meeting people which comes with the job.

“I love the fresh air and meeting people and seeing the people come back,” Sue said. You make friends. And we like meeting all the different people. They come from all over, as far as South America for the international clay target shooting tournament at Caribou Gun Club four years ago. We had a mother, father and 2-year-old child for two weeks. They rented a motor home and car from the (Twin Cities).”

People from all over, who have family in the area, come and stay at the Lake Washington campground, whether it be for high school and college graduations, weddings or other events. The campground also draws in local people from St. Peter, Le Sueur, Le Center, Cleveland, Kasota, Henderson, Mankato, Belle Plaine, etc. Those individuals, groups and/or families are just looking for an opportunity to get out of the house and enjoy nature.

The location of the campground also makes it convenient.

“It’s close to whatever if anybody needs anything out here,” Sue said. “it’s a short trip to St. Peter, Mankato; we’ve got Westwood Marina just down the road down here for food. There’s restaurants all the way around. Cleveland is just a hop and jump away.”

“It’s close to everything,” Tom emphasized.

At the same time, they’re away from the city and in a woodsy setting.

A lot of people enjoy having picnics and cookouts with their families at the campground. A lot of them come in a group of four or five campers, and they have potlucks among them, the Holickys said. Most bring their own grill.

“One of the biggest perks of this campground is the big lots. The lots are so big that they can put their own boat and their own camper on their own lot, their own picnic table and their own fire pit and still have room for their yard games with their families, “ Sue said. “It would be very easy to put one camper in between spots out here. But they don’t want to do that, because this campground is well known for its large sites.”

Well water spigots also are scattered throughout the campground. There is electrical on each of the sites with their own picnic table and fire pit. People bring their boats, and they trailer them to one of the two public accesses on the lake.

And then there’s the chance to see some nature.

“The trails are a big draw,” Sue said of the 3.5 miles of trails which go through the woods and down to the lake. “Lots of people spend lots of time walking. Early spring, lots of people are out here for mushrooms. Lots of people bring their dogs and go walking.”

The number of campers will grow even higher when the nine-year old campground is expanded to 15 or more full-hookup sites.

The nearly $6 million worth of expansion plans (Lake Washington Regional Park and Campground Master Planning Project) were expected to begin next year, but that may be set back because of the pandemic.

Le Sueur County received a $1 million dollar grant from the state’s Legacy Amendment for the first phase to expand the 166-acre campground, which is the only public park on Lake Washington, established in 1971. Built in three phases over a 10-year span, the first phase is to build the 24-foot-wide road extension to the lake. The park is located along nearly one mile of shoreline.

“There won’t be a new boat landing, but they’re hoping to have rental of kayaks and canoes,” Sue said.

It will have a non-motorized vehicle launch area and the beach and shoreline will be cleaned and restored to DNR regulations.

There will be more trails, including the addition of a handicapped accessible 8-foot wide mile-and-a-half paved trail for walking, bikes and strollers. Seating rest areas will be installed. The campground still will have the mowed grass walking trails.

In addition, an overlook observation tower will be constructed, and the prairie/forest will be restored.