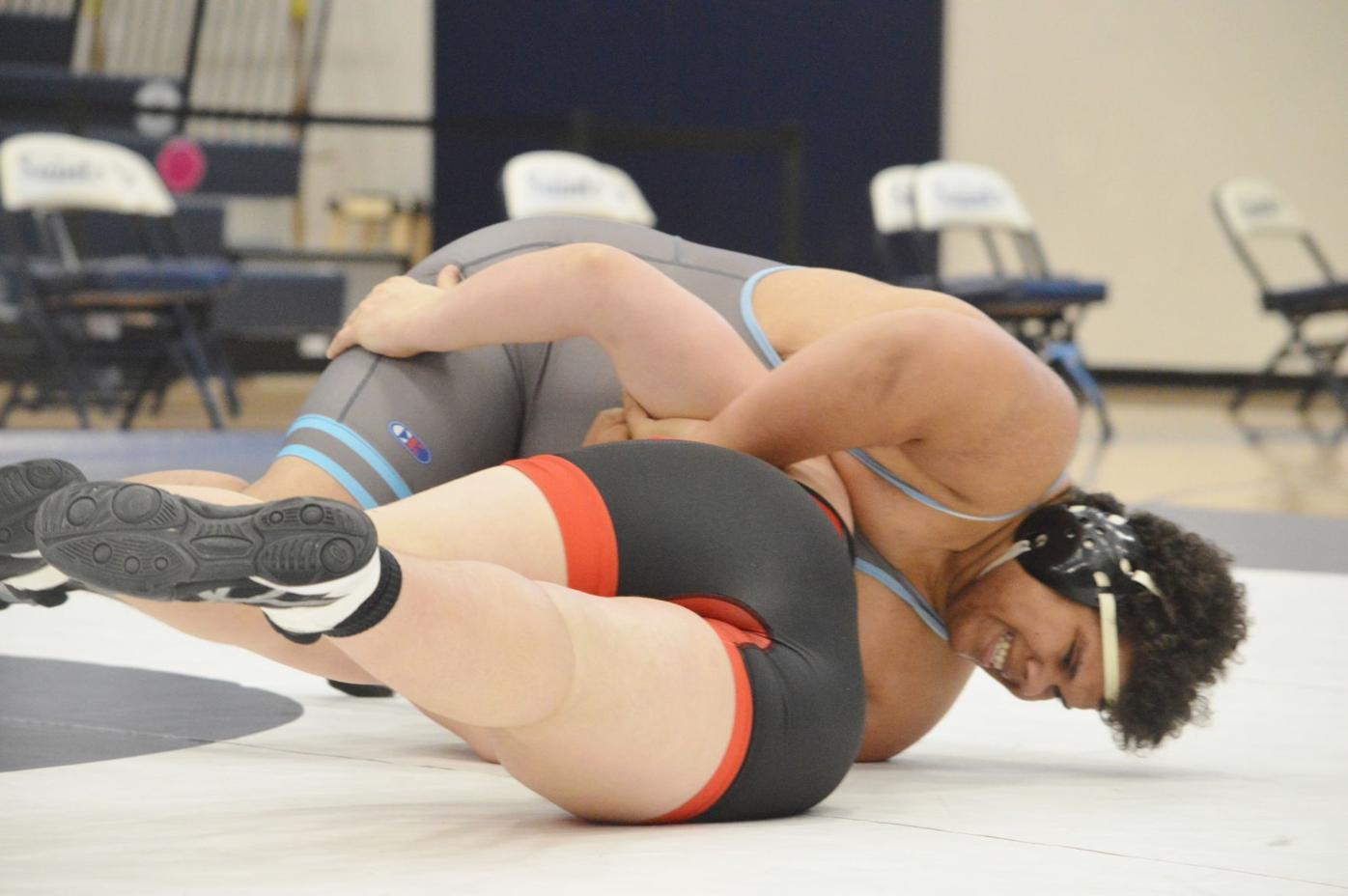 Robert Bastyr of TCU pins an FMCW wrestler in the last match of the state tournament. (Carson Hughes/southernminn.com) 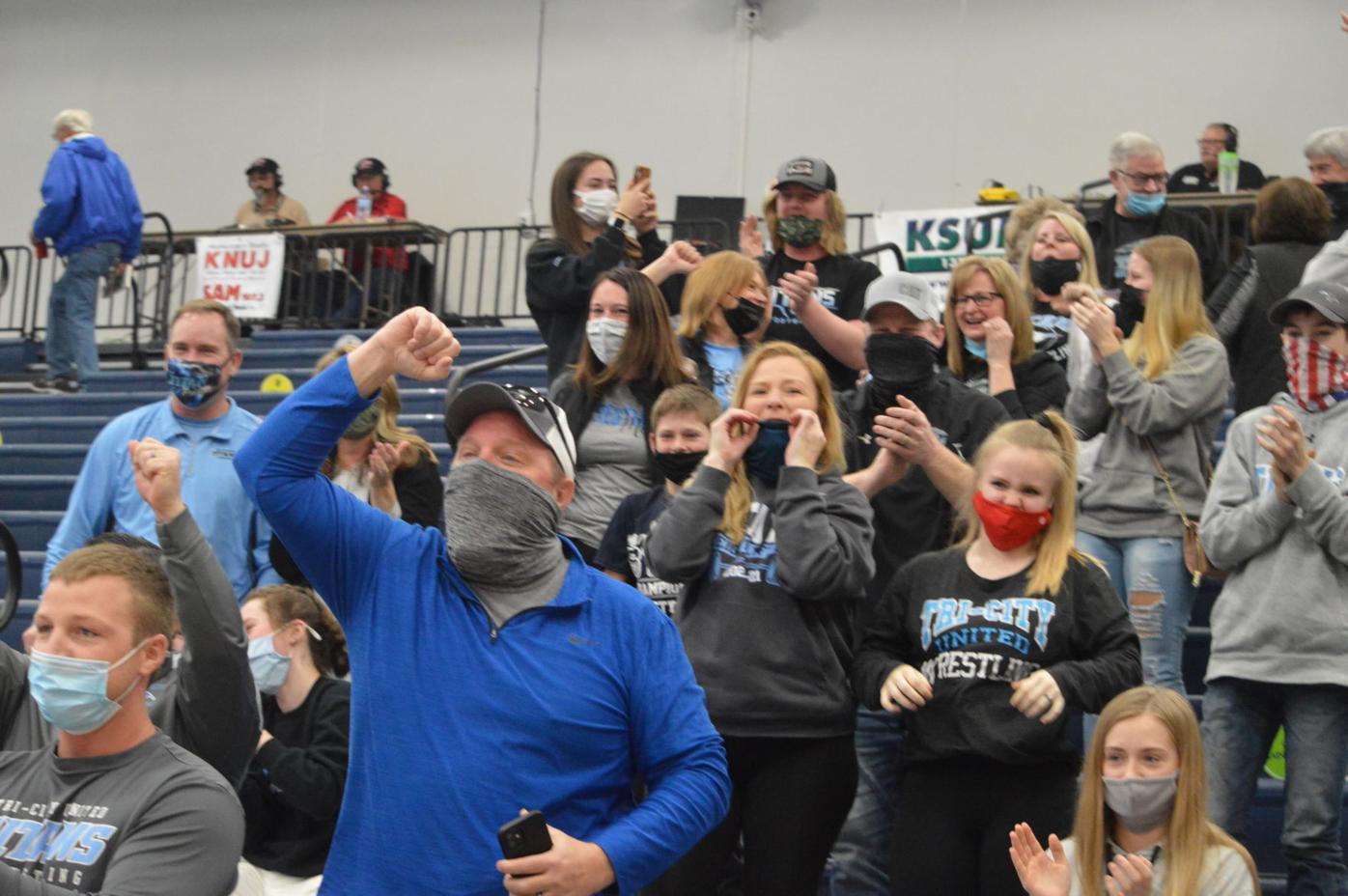 The crowd supporting TCU cheers as it becomes apparent the wrestling team has won the section 2AA Championship. (Carson Hughes/southernminn.com) 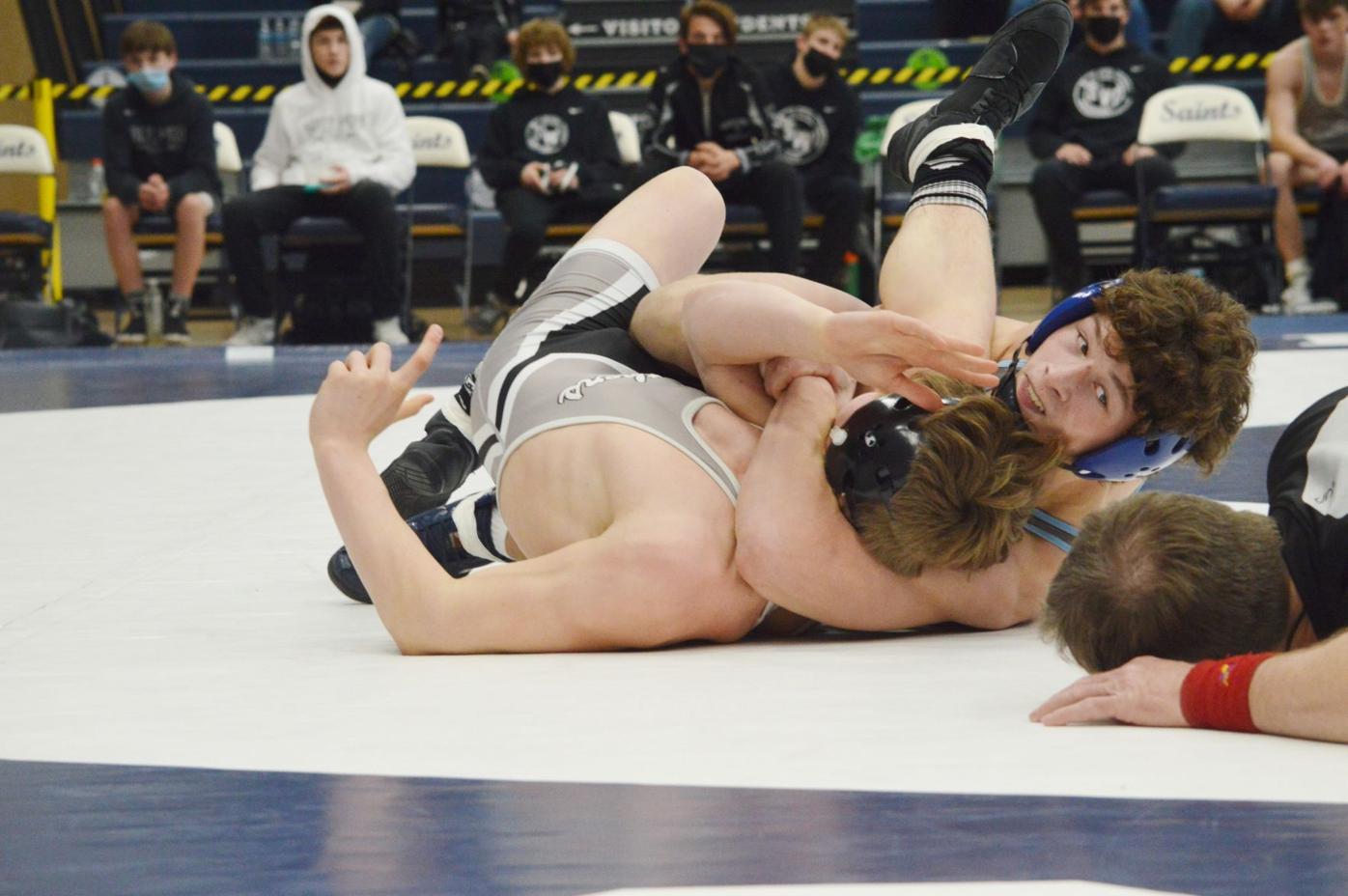 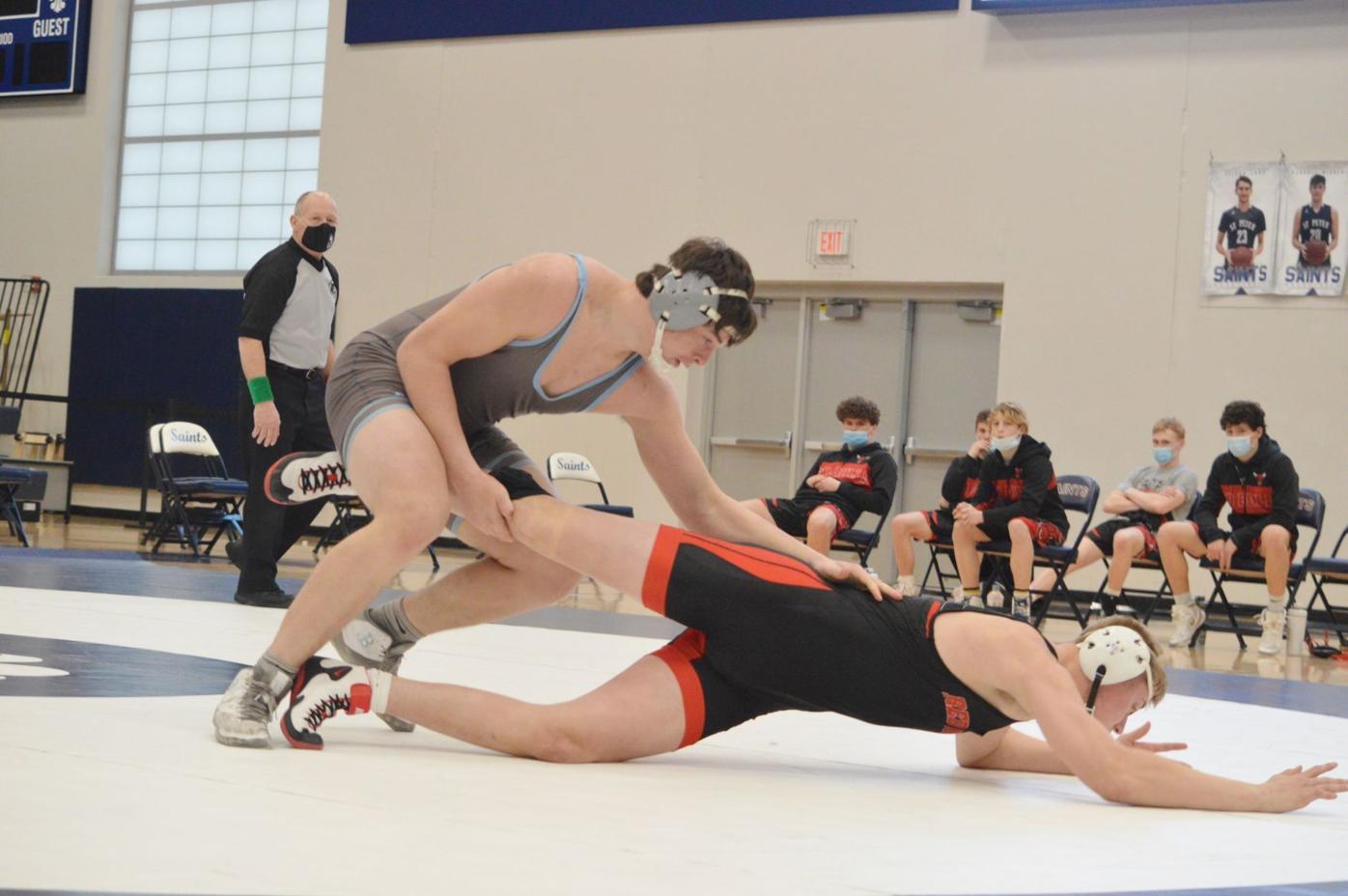 Riley O’Malley of TCU grabs his Fairmont/MCW opponent by the leg at the state tournament. (Carson Hughes/southernminn.com) 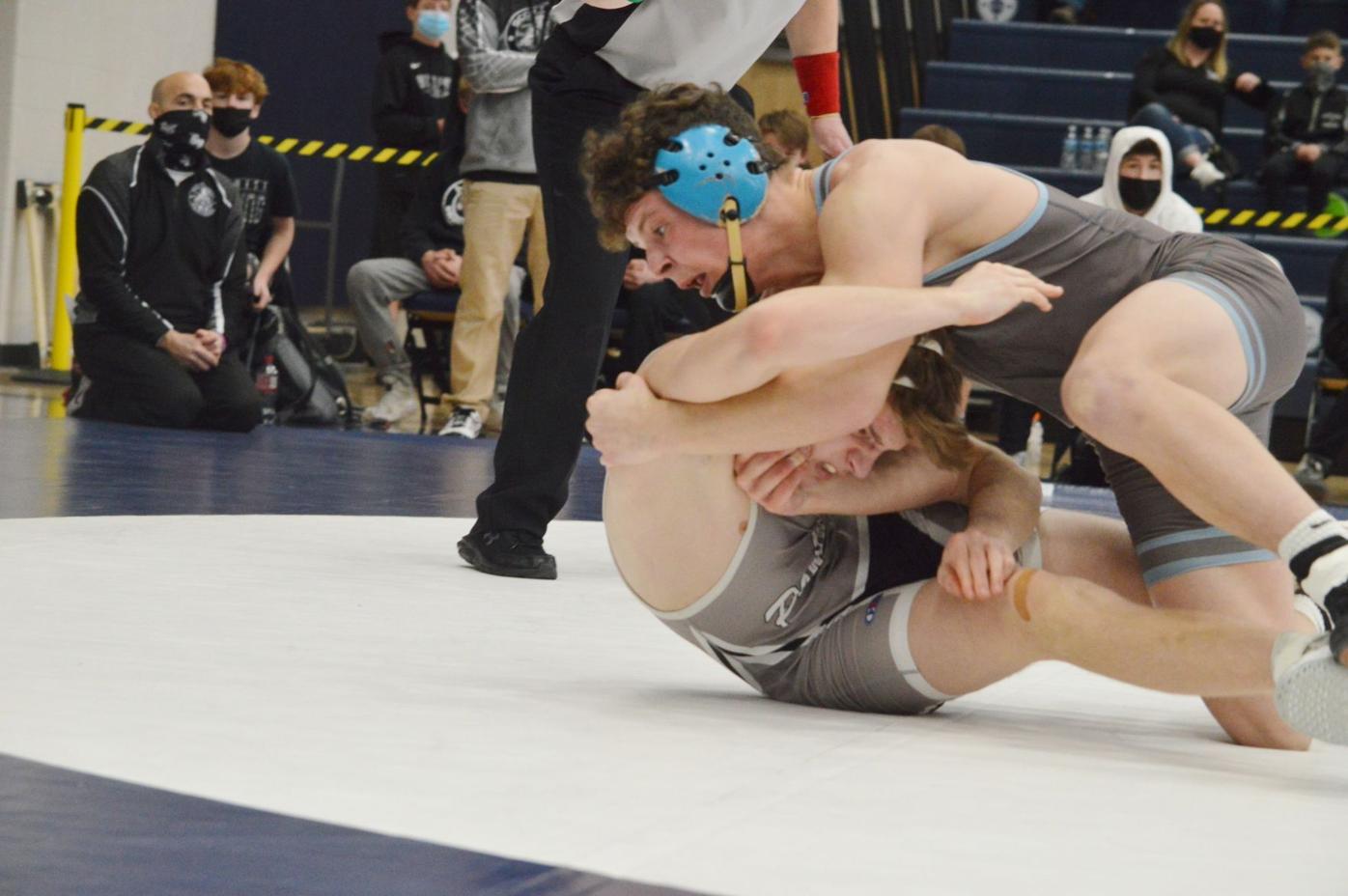 The TCU squad can consider itself at least somewhat unlucky. Qualifying for state in a COVID-impacted year, its first round meet took place immediately after the section finals in St. Peter. The Titans were downed by a strong Fairmont team, ending their opportunity to travel to the Xcel Energy Center in St. Paul.

Against Scott West for the Section 2AA championship, the odds were against TCU in more ways than one. Scott West had the better record, seeded No. 2 in the tournament while the Titans were seeded No. 4. Scott West trounced the Titans 33-25 the last time they faced off this season and has beaten the Titans a dozen times over the years. Finally, the Titans lacked a full roster, and had to forfeit 12 points to the opposing team.

But in spite of all these obstacles, the Titans rose to the challenge. In a tense back and forth, TCU got the upper hand on Scott West, winning 40-25 and qualifying for the state tournament.

“This group of seniors has really been good leaders for this team,” said TCU Coach Paul Norgren. “A big reason why we were able to do this with two guys out in the lineup, they kept on being positive and wanting to wrestle.”

The Titans entered the meet knowing they would need large enough wins to give TCU a fighting chance at overcoming a 12-point deficit. Ayden Balma (22-8) gave TCU just the boost they were looking for, starting the match off with a win by fall in 5:18 to net the Titans six points. But Scott West showed they weren’t going to make this match easy. Over the next two rounds, the Panthers overpowered Chris Johnson (24-7) and Zach Balma (12-16) to net a total 7 points, placing Scott West in the lead.

The Titans were determined to not let the Panthers make any more gains. Brant Lemiuex (14-16) initially struggled to keep his opponent on the ground. While Lemiuex was the only one producing takedowns, his opponent gained points by consistently escaping. But in the last seconds, Lemiuex locked his opponent in a near fall and ended the match with a 10-4 decision win.

Cole Franek (18-13) faced a similarly tough opponent. Though he earned the first takedown, Franek was down 3-4 at the end of the second round. But in the third, Franek bounced back, picking up and dropping his opponent to the mat. Holding him down, Franek ended the match with an 11-5 decision win.

After two tough battles, the Titans were up 12-7, but their lead instantly evaporated to 12-13 after the first forfeit. Slim decision wins weren’t going to be enough to overcome their deficits.

Fortunately, TCU collected even larger wins over the next two matches. Caleb Whipps (22-5) went on the offensive in the next matchup. After ending the second round with a slim 5-2 advantage, Whipps ramped up the aggression, leaping at his opponent again and a gain to deliver rapid fire takedowns. In just two minutes, Whipps more than doubled his score and ended the match with a 14-6 major decision.

Caden O’Malley (24-6) put up an aggressive front as well and delivered the Titans one of their most needed wins. In a flash, O’Malley took down his opponent and pinned his back to the mat in just 55 seconds, earning a six point boost and placing the Titans in the lead 22-13.

But as soon as the Titans created some distances, the Panthers tied up the score. With a second forfeit from TCU, the Panthers narrowed the gap 22-19. After defeating Marco Reyes (18-11) in a 6-3 decision, Scott West tied up the competition 22-22.

TCU earned some needed relief from Brody Rud (23-6) in the next round. After earning a 12-4 advantage on his opponent with several near falls, Rud finally delivered the decisive blow to fell his opponent in 4:41. Even as Scott West took the next match, defeating Tegan Determan (7-11) in a 9-5 decision, Rud’s win was enough for TCU to keep a 28-25 lead.

With two matches left and just a three-point gap both teams had a chance to win. But Riley O’Malley (26-3) closed the doors on the Panthers’ chances. In just 1:20, O’Malley pinned his opponent in the first round, giving TCU an insurmountable 34-25 advantage. Robert Bastyr (14-6) capped off the Titans performance with another pin, felling his opponent in 59 seconds to boost the Titans up even further 40-25.

As the Section 2AA champions, the Titans returned to the mat half an hour later to compete in their first ever state tournament. Their foes were 3AA champions Fairmont-Martin County West. Like Scott West, FMCW was a problem for TCU in the past, defeating the Titans 45-26 in the last match. FMCW also carried a full roster, meaning that the Titans would once again have to overcome a 12 point deficit.

That disadvantage proved too great for TCU to overcome and may have cost them their chance to compete in the state semifinals. The Red Bulls ultimately knocked out the Titans by an 11-point margin 39-28.

FMCW jumped out of the gate with a six-point advantage after felling Ayden Balma. Chris Johnson struck back and won a 6-2 decision for the Titans. But this didn’t stop of the Red Bulls from racking up the score. Over the next four rounds, FMCW collected 21 points between two fall victories, a decision win and a forfeit, catapulting the Red Bulls up 27-3.

Whipps put an end to the Red Bulls winning streak, collecting a victory by fall in 3:41. Caden O’Malley followed up with a 10-4 win for the Titans, narrowing the score down 27-12.

But the Red Bulls bounced back with another forfeit and then a decision win, jumping to a 36-12 lead. The Titans would need to sweep all remaining four rounds by fall to tie the score up. That was ultimately too much to achieve, but they came close.

Rud collected a 17-4 major decision win on his opponent, pushing the Titans up to 16. The Red Bulls answered in the next round with a slim 8-5 decision victory, but TCU followed with two back-to-back fall victories. Riley O’Malley and Bastyr launched the Titans from 16 to 28 after pinning their opponents in 2:11 and 1:16 respectively.

While the Titans might not have gotten as far into the state tournament as they wished, it was nonetheless a record-breaking season for the Titans and a remarkable feat to become section champions with two empty slots.

“It feels good,” said Riley O’Malley after the match. “We wrestled really tough. It’s too bad we didn’t pull off the victory against Fairmont, but we gave it our best fight. I’m proud of everyone.”

“It really sucks that we weren’t able to go to the Xcel Center and get to wrestle Fairmont there,” said Caden O’Malley. “But I think that was the best we ever wrestled, especially since we wrestled with two openings in the lineup and still did really well.”

“Everyone did their own part,” said Caleb Whipps. “They all did good and fulfilled their role.”

The Titans will still have more chances to make state. On Wednesday, TCU will participate in the individual section tournament at Mankato East High School and Redwood Falls on Saturday. The champion of each weight class will have the opportunity to participate in the state tournament March 26 at St. Michael-Albertville.

“If we wrestle on Wednesday like we did today, we have a shot to bring the whole team,” said Brody Rud.