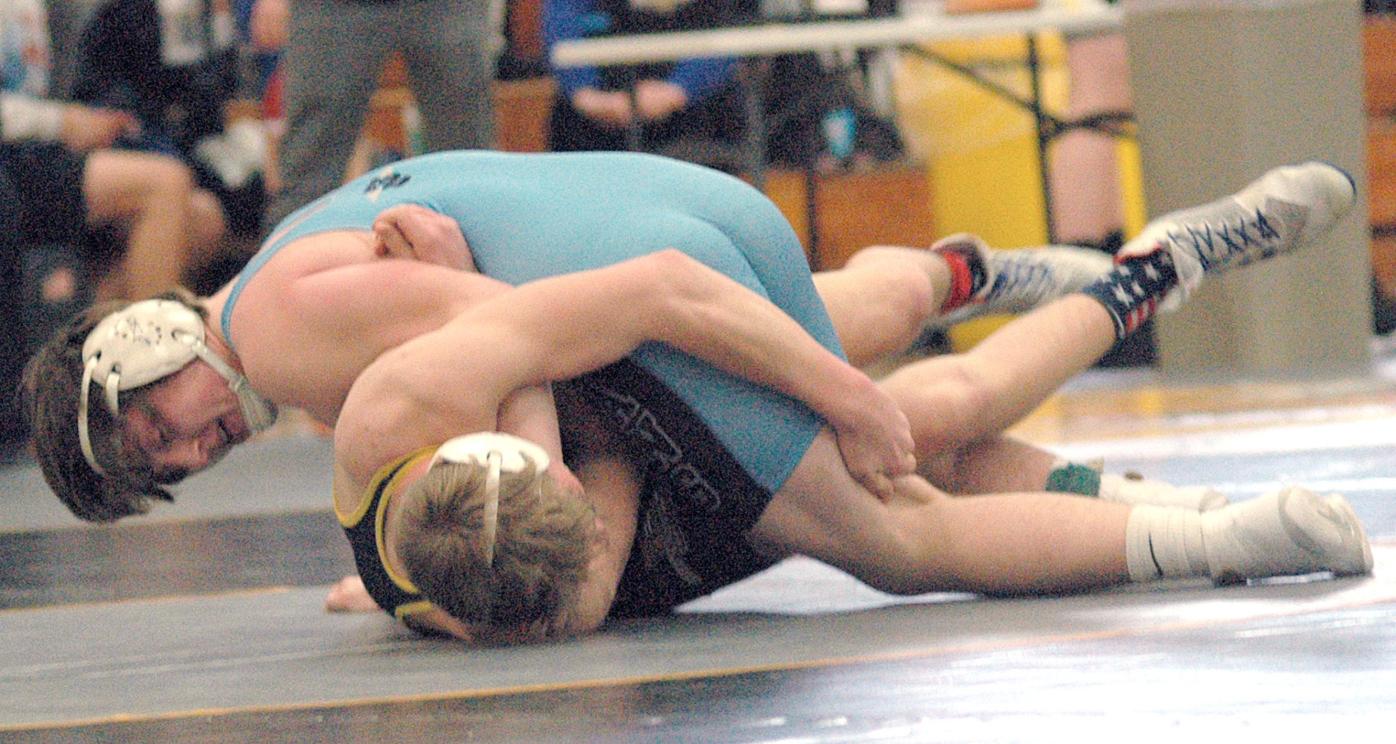 Brody Rud fells Eli Kurtz of Hutchinson and moved onto the championship round of sections. (Pat Beck photos/southernmiin.com) 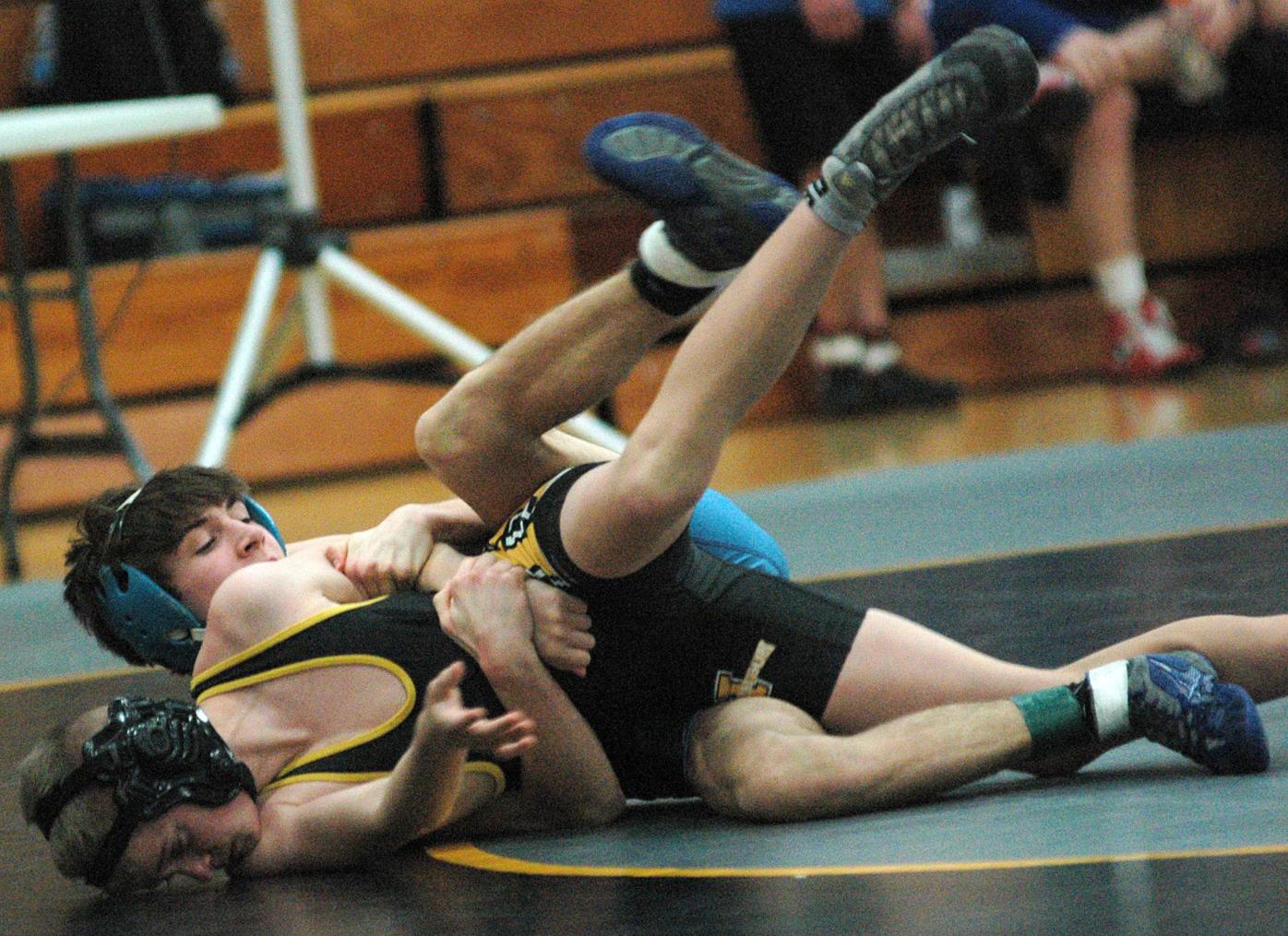 Chris Johnson fells Hutchinson’s Rayden Bipes in just over a minute, advancing to the championship round of sections. 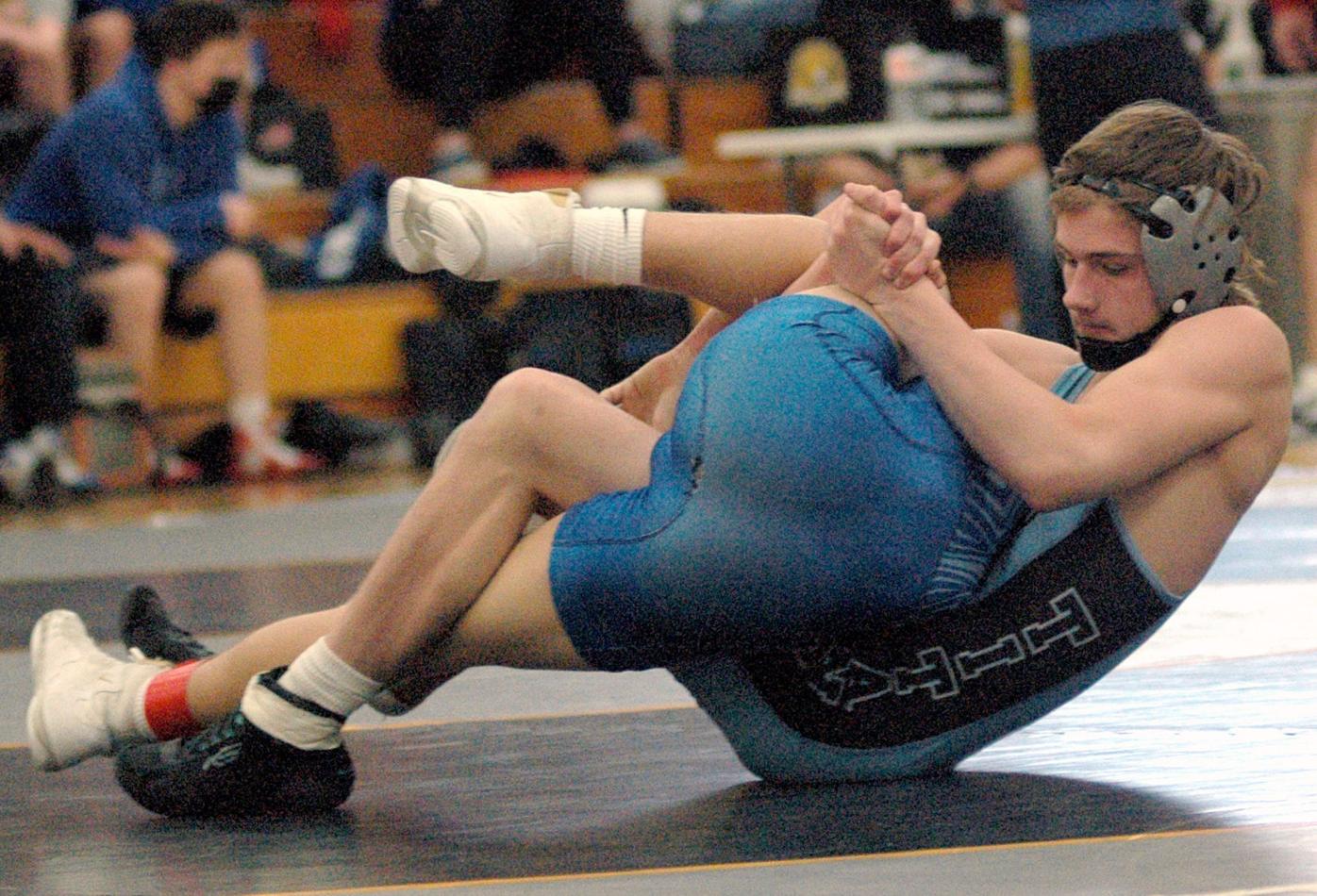 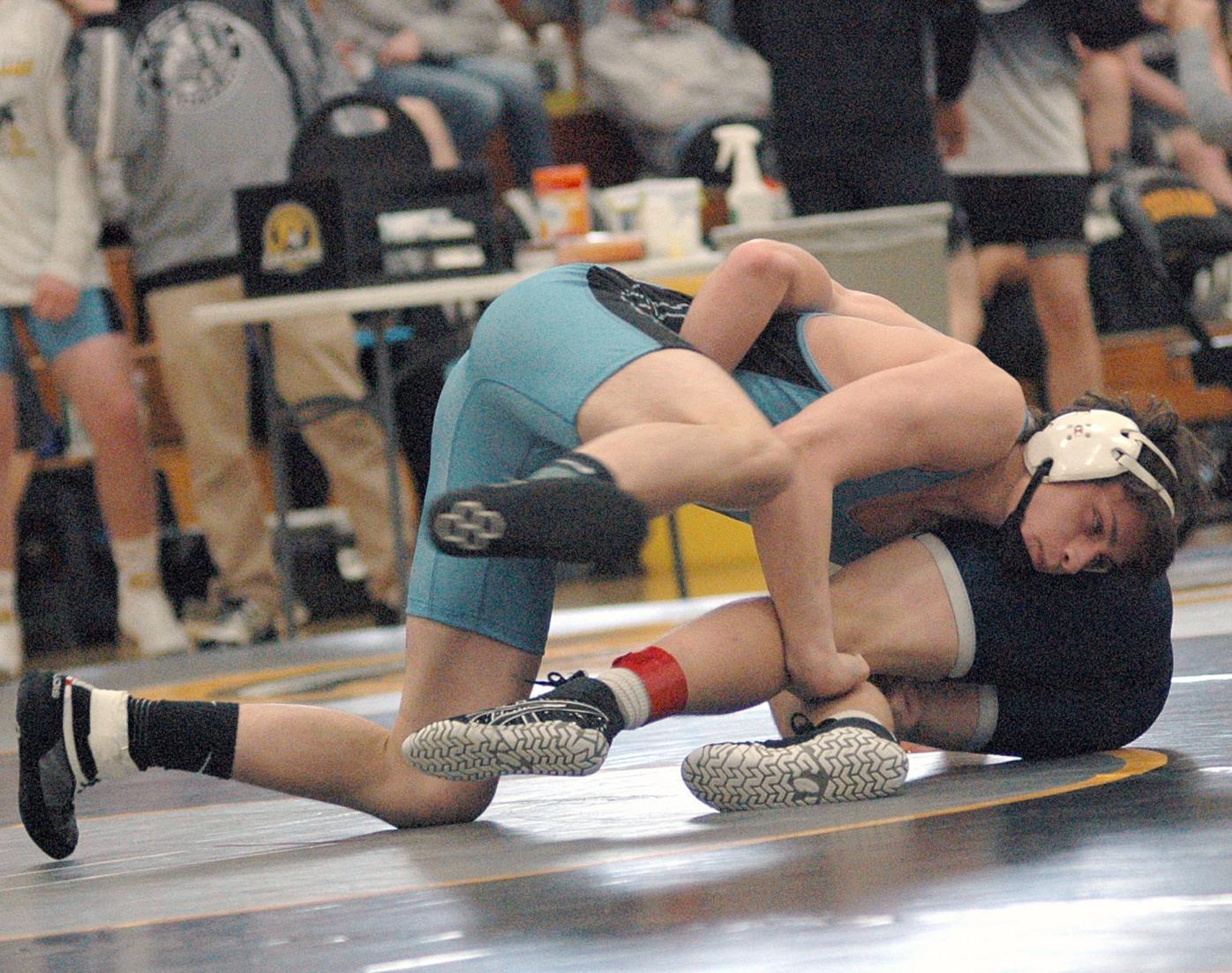 TCU’s Marco Reyes will compete for third in sections on Saturday after advancing to consolation finals. (Pat Beck/southernminn.com) 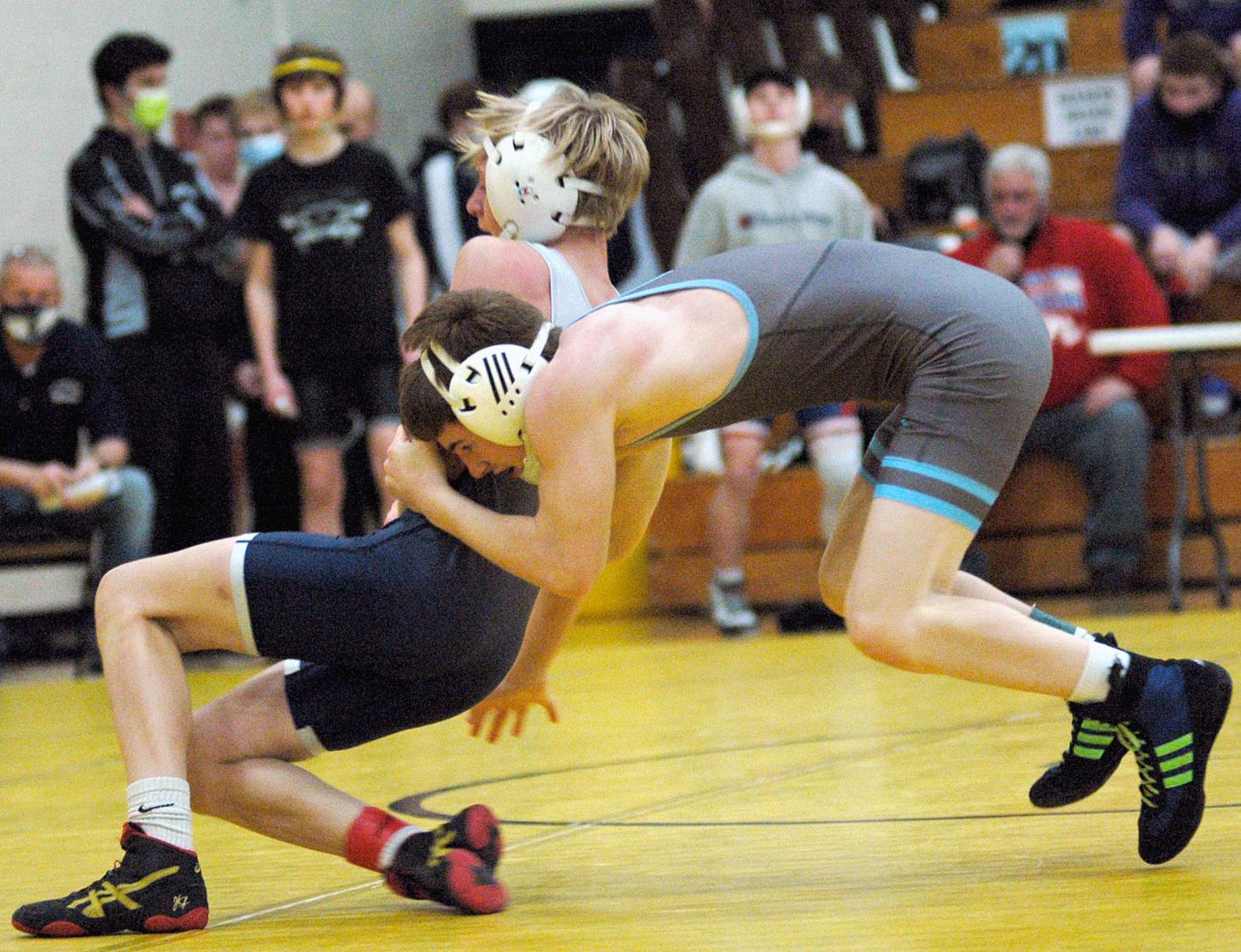 TCU’s Ayden Balma was one of five TCU wrestlers to advance to the champonship round of the section tournament.

Brody Rud fells Eli Kurtz of Hutchinson and moved onto the championship round of sections. (Pat Beck photos/southernmiin.com)

Chris Johnson fells Hutchinson’s Rayden Bipes in just over a minute, advancing to the championship round of sections.

TCU’s Marco Reyes will compete for third in sections on Saturday after advancing to consolation finals. (Pat Beck/southernminn.com)

TCU’s Ayden Balma was one of five TCU wrestlers to advance to the champonship round of the section tournament.

The Tri-City United wrestlers are going to state.

After falling in the first round of the state tournament, the Titans are finally getting their chance to compete. Seven Titans entered the state preliminaries on Saturday and three will move on further. Chris Johnson, Brody Rud and Riley O’Malley qualified by placing in the top two in their respective weight classes in the section tournament.

Chris Johnson (26-7) was the first to qualify for state with a second place finish. Johnson took out his first opponent, Drew Chandler of Marshall, in just 19 seconds, leading into a 5-2 victory for Johnson over Dallas Walton, of MAHACA. Johnson advanced to the championship round, where he was defeated by Luke Knudson of New London-Spicer in an 11-2 major decision. But Johnson gave it his all in the fight for true second, and it paid off. Competing against Cael Olson, of Delano, Johnson swept the match with a 13-0 major decision.

Brody Rud (23-7) also landed a seat at state with a second-place finish. Rud claimed swift victories with a 1:03 pinfall win over Asher Malek, of MAHACA, and a 9-2 decision over Kent Lais, of Worthington. Rud was defeated 5-0 by first-place winner Cole Rainweiler, of New Ulm Area, in the championship round, but thanks to Rud’s previous win over third-place finisher Lais, he advanced directly into second place.

Riley O’Malley (27-3) was declared champion of his category after a string of dominant performances. O’Malley opened with a 1:45 pin on Brock Marty, of MAHACA, before moving on to a 14-5 major decision victory over Cole Hennigns, of Worthington. In his biggest test yet, O’Malley battled Grant Louwagie, of Marshall, for the first-place title. It was his slimmest win of the tournament, but O’Malley came out on top in a 7-2 decision.

Ayden Balma (23-7) finished fourth in the state preliminaries. Balma first took on Parker Kamm, of New Ulm Area, in a narrow 2-1 match. Balma claimed victory but was knocked out of the running by Carter Brandt of Redwood Valley in a 2:53 fall, sending Balma to the consolation semifinals. The TCU wrestler defeated Max Martin of Hutchinson in a 5-2 decision to enter a rematch with Kamm for third place. Kamm ultimately got the better of Balma this time, defeating TCU in a 5-2 decision.

Zach Balma (13-6) was hit with some tough opponents in the state preliminaries. He was knocked out in the opening round by Jesse Potts of Fairmont Martin County West, but bounced back with 3-1 decision over New Ulm Area’s Winsten Nienhaus. But Balma’s advance to third was cut short by Scott West’s Zach Tracy in a 58 second fall. Tracy went on to claim third.

Caden O’Malley (25-8) had a great start to his first round matchup. Against Hunter Baker of Luverne, O’Malley swamped his opponent in a 3:26 fall. But O’Malley was narrowly beaten in a 3-2 decision by Dain Mortenson of DBLM. O’Malley cleared the way to the consolation finals with a 3:12 fall, but landed in fourth after being trumped 6-5 by Mankato East’s Braeden Hendel.

Marco Reyes (20-13) also landed a first round victory, scoring a 5-2 victory over Redwood Valley’s Matt Zeug. But the Titans was cut off by second place finisher Keegan Lemke of Glencoe-Lester Prairie in a 6-1 decision. Reyes earned a 1:09 fall to move up to the consolation finals, but fell to fourth place after losing a 6-5 decision to Tanner Burmeister, of WMML.