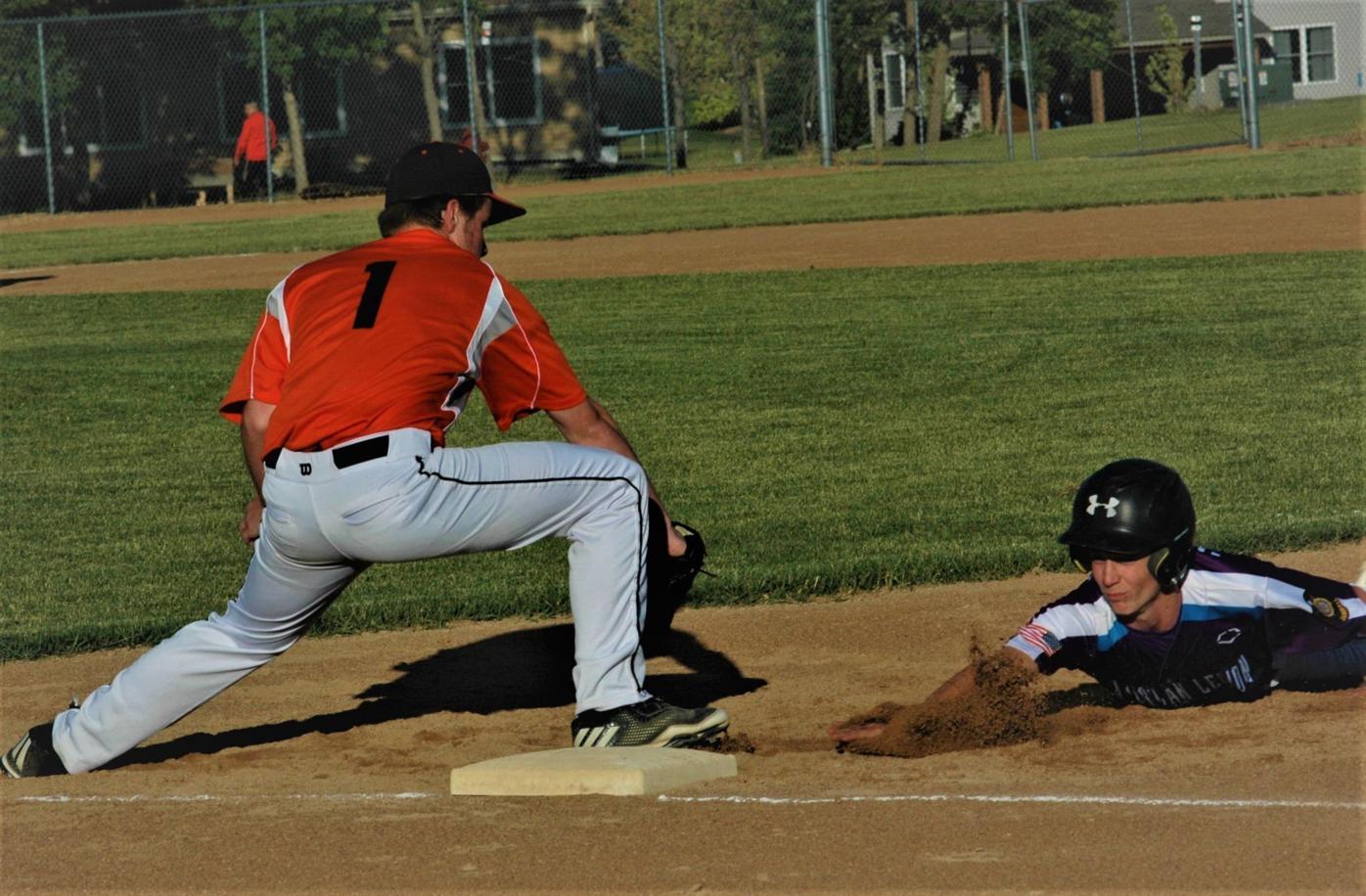 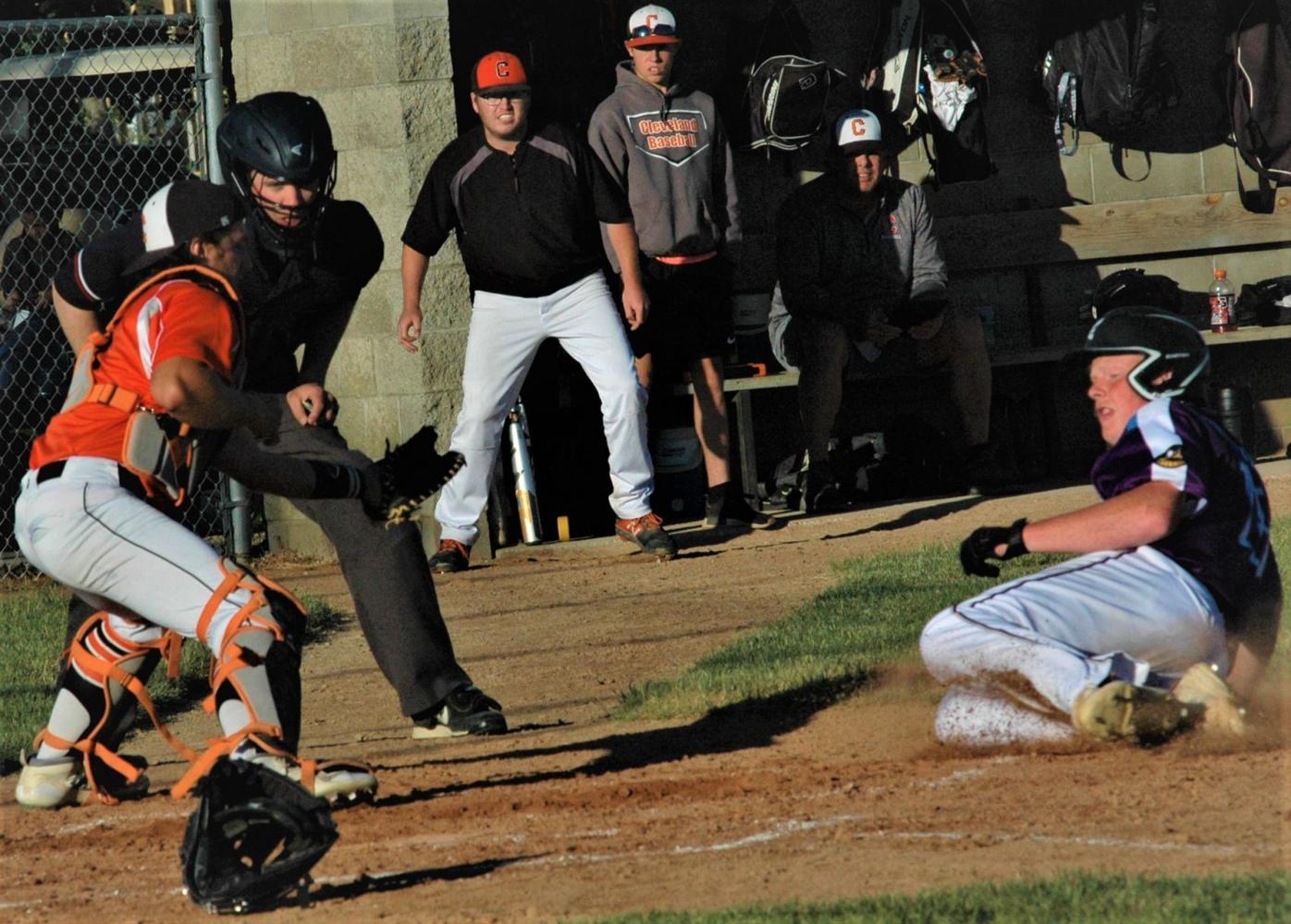 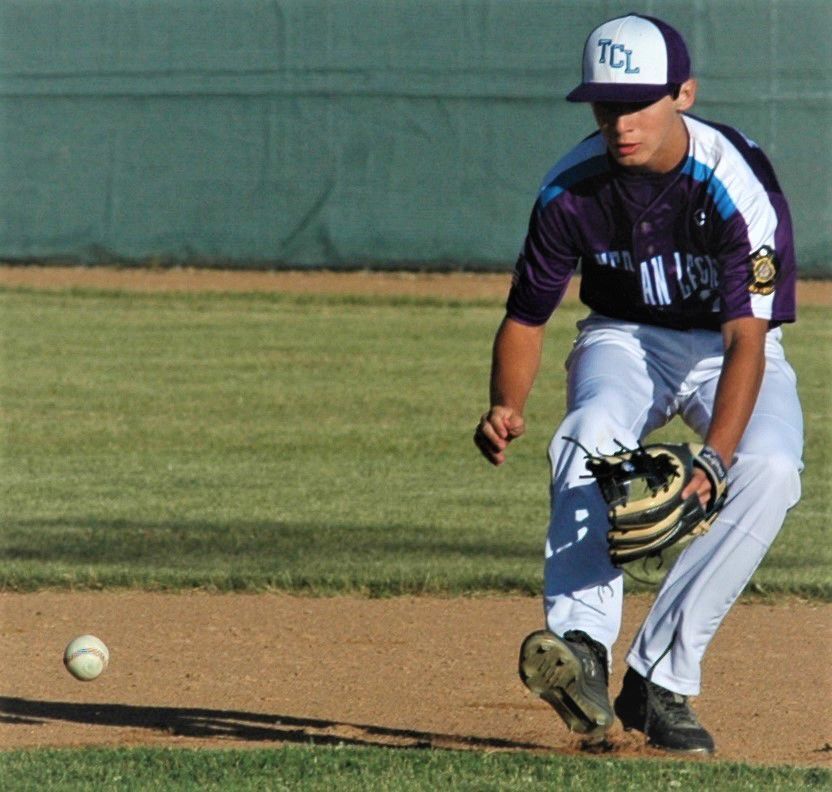 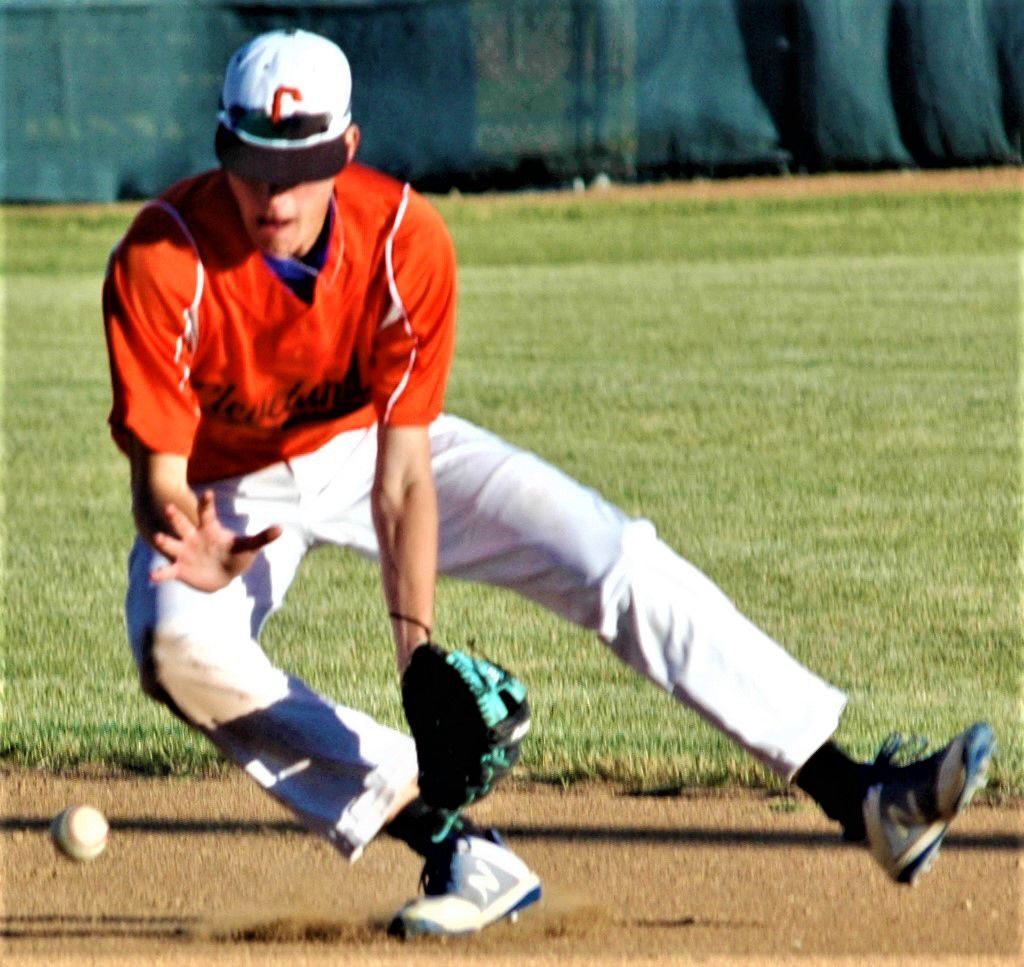 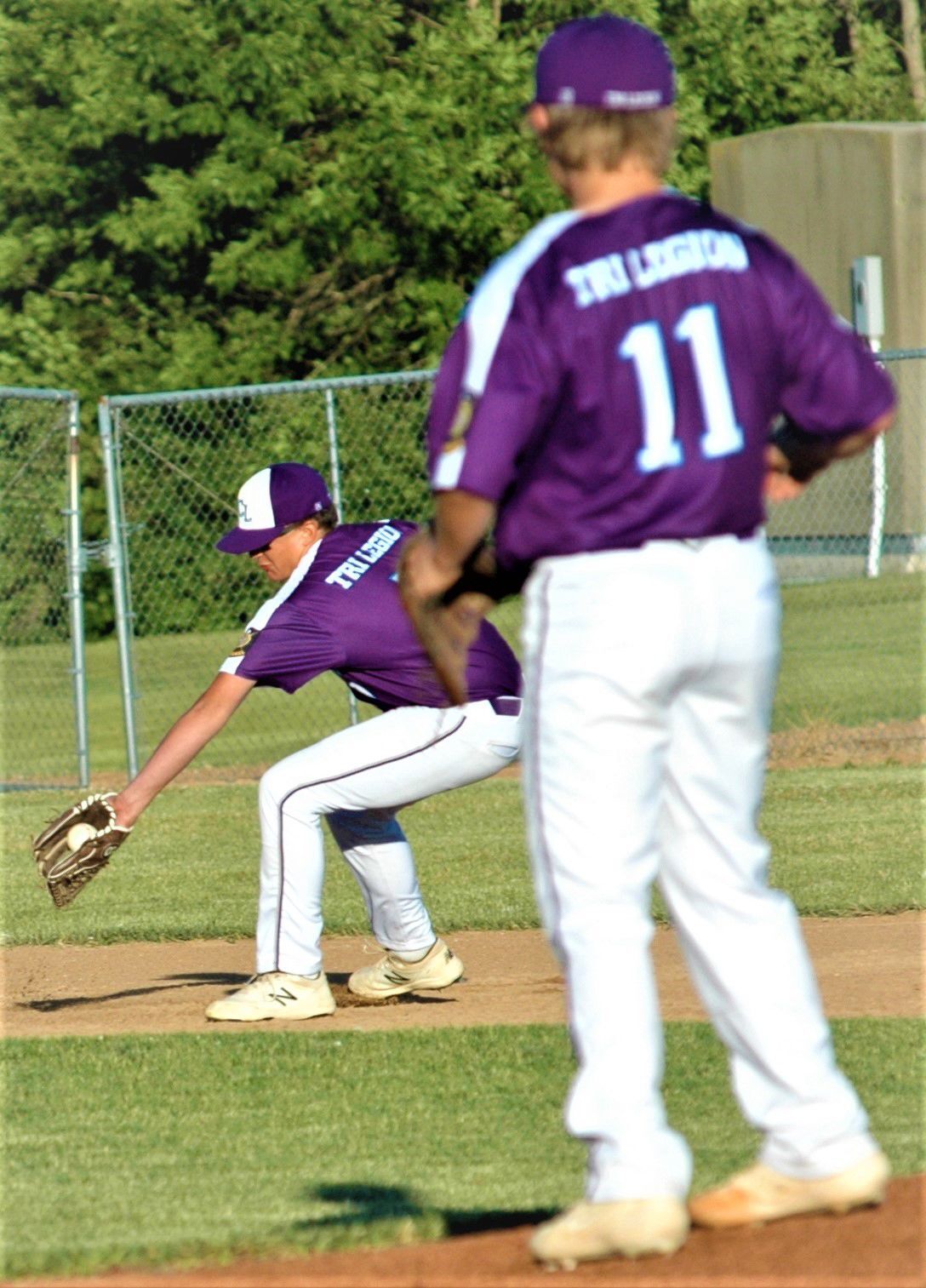 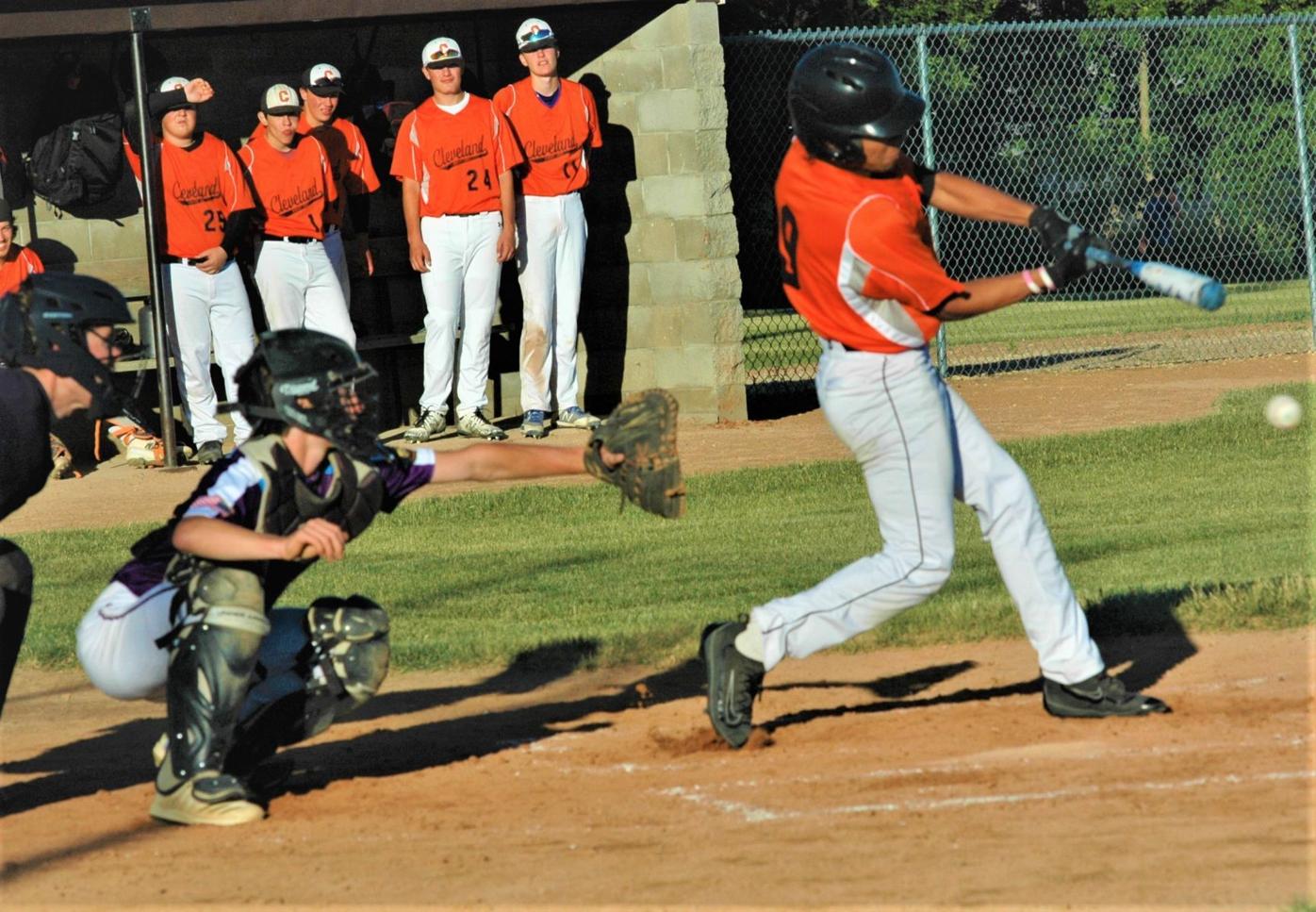 Cleveland designated hitter Kaleb Timlin bats 2-for-3 with and RBI against Tri-City Legion. The catcher is Dylan Westerman. (Pat Beck/southernminn.com)

Cleveland designated hitter Kaleb Timlin bats 2-for-3 with and RBI against Tri-City Legion. The catcher is Dylan Westerman. (Pat Beck/southernminn.com)

The game went back and forth with Tri-Legion taking a 3-0 lead in the first. Cleveland scored five runs in the fifth inning to take an 8-4 lead. But Tri-Legion tied it it up 8-8 with four runs in the bottom of the fifth.

Cleveland appeared to have the game locked up by scoring five runs in the seventh inning for a 13-8 lead.

But Tri-Legion didn't give up and scored six runs in the bottom of the seventh to win 14-13. Mavrick Birdsell's walk-off single drove in Max Krautkremer for the game-winning run, and the team celebrated together on the field in front of a cheering crowd.

The hit- and error-filled game featured 17 hits by Cleveland and 20 by Tri-Legion. Cleveland committed eight errors, while Tri-Legion had five miscues.

Caden and Carter O'Malley led the Tri-Legion attack. Caden batted 3-for-5 with a double and two runs scored. Carter went 3-for-4 with a double, one run and an RBI.

Getting a hit each for Tri-Legion were lead-off hitter Dylan Westerman (1-for-3, triple, two walks, three runs) and Max Krautkremer (1-for-3, walk, three runs, two RBIs).

Three other Cleveland players had two hits apiece. Lucas Walechka finished 1-for-4 with a double and an RBI. Alex McCabe went 2-for-5 with an RBI and two runs. Taylon Hoheisel finished 2-for-4 with two runs.

Getting a hit each for Cleveland were Kaleb Timlin (1-for-4, one run, one RBI), Carter Zimmerman (1-for-5, two RBIs, one run). Ethan Fuller went 0-for-4 with two runs.

Carter O'Malley started on the mound for Tri-Legion. He pitched four innings with four strikeouts, no walks, eight hits and three runs (one earned).

Nolan Redmond pitched the next two innings, allowing six runs (two earned) on six hits and no walks with one strikeout.

Max Krautkremer picked up the win in relief, throwing the last inning and allowing four runs (three earned) on three hits and no walks.

Carter Zimmerman pitched the sixth inning, giving up four runs (three earned) on four hits, one walk and striking out one.

Carter Dylla came in the seventh with the bases load and no outs and allowed four runs (three earned) on five hits and no walks in picking up the loss.

Tri-Legion evened its record at 2-2, while Cleveland remained winless at 0-5.