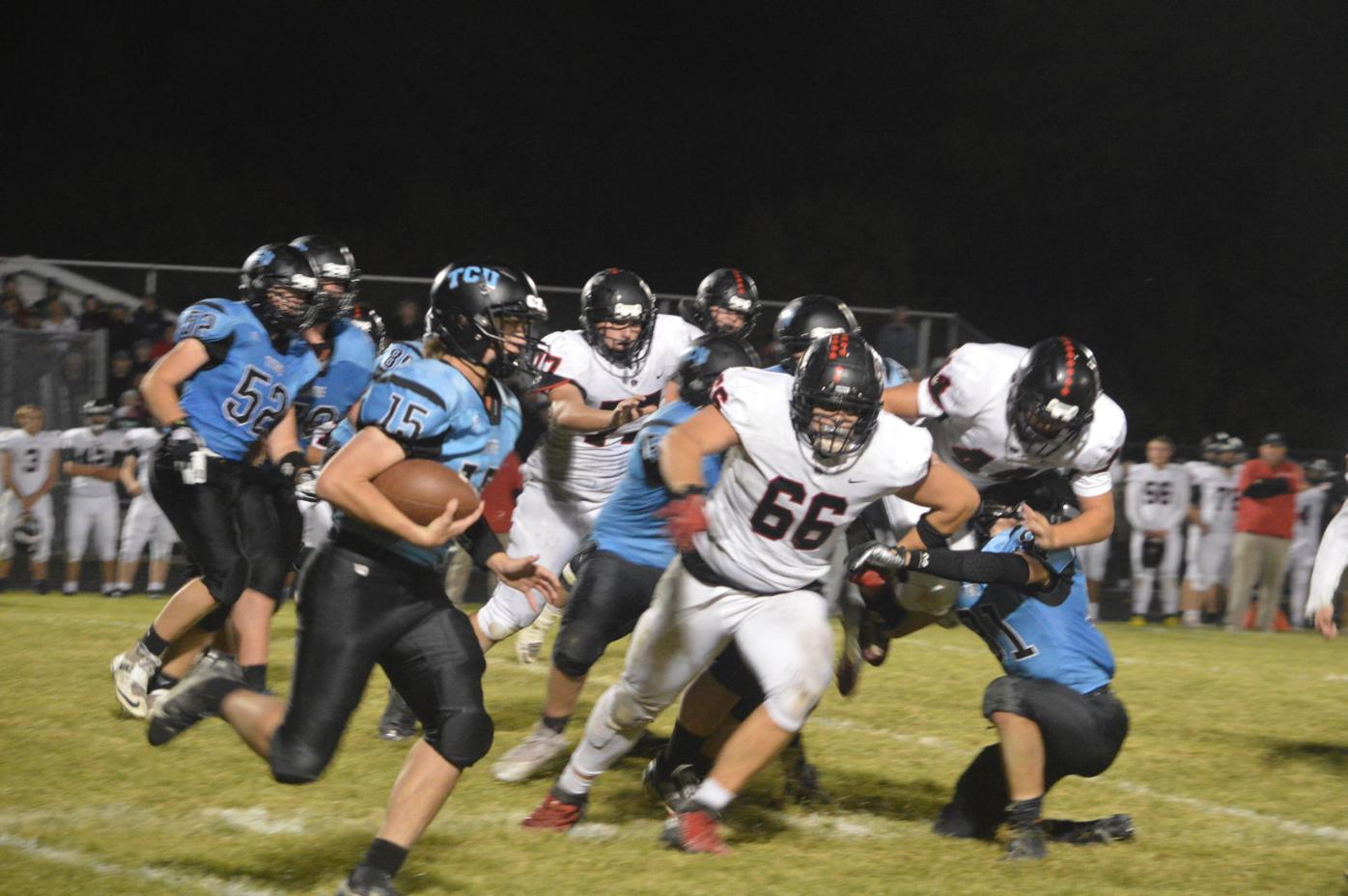 Henry Schendel runs the ball past the Tiger’s defensive line, carrying the Titans up to the goal line in the fourth quarter. (Carson Hughes/southernminn.com) 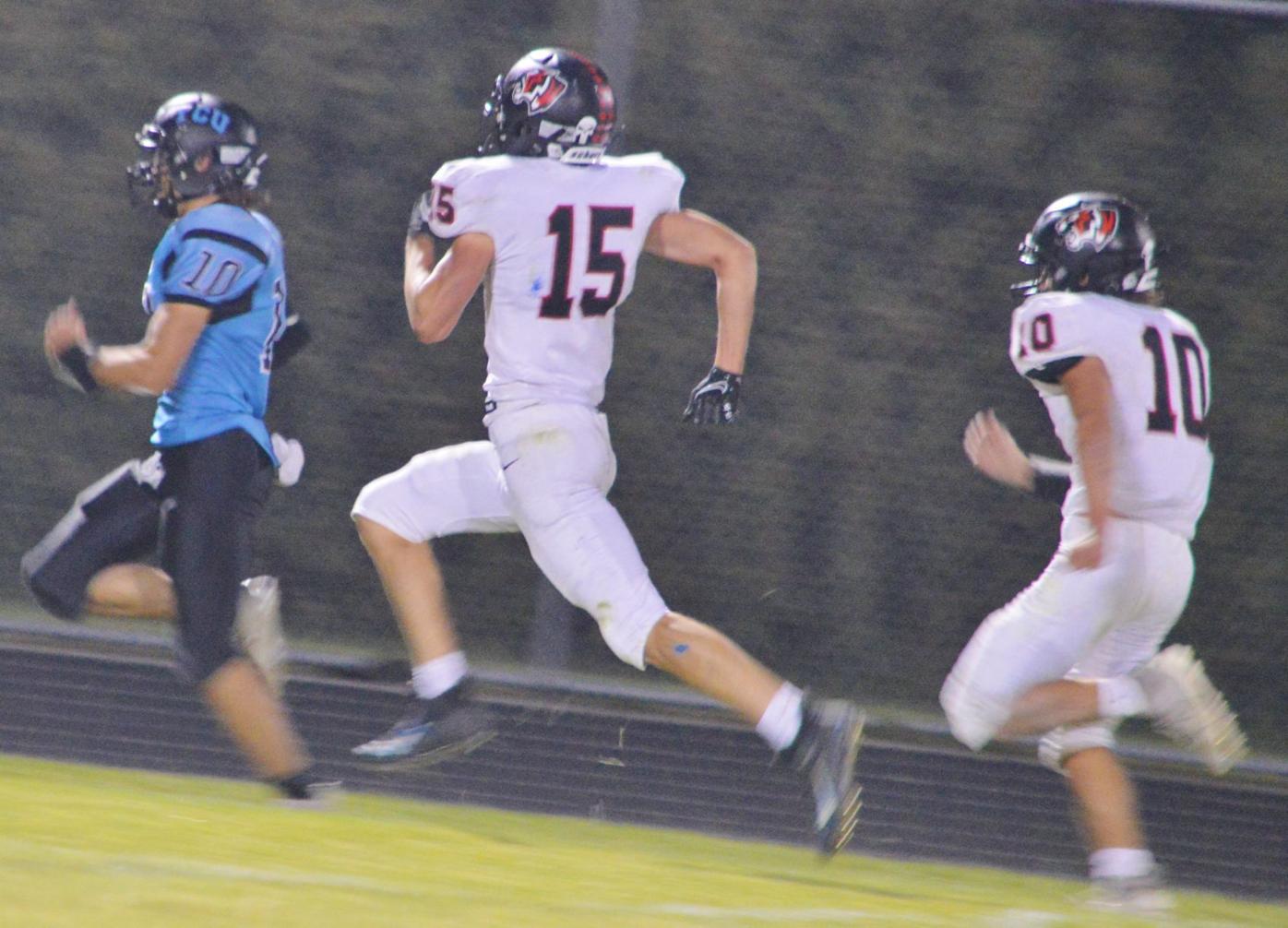 Payton Hennen outran the Tigers for 94 yards into the end zone, but the play was called back, due to a penalty. (Carson Hughes/southernminn.com) 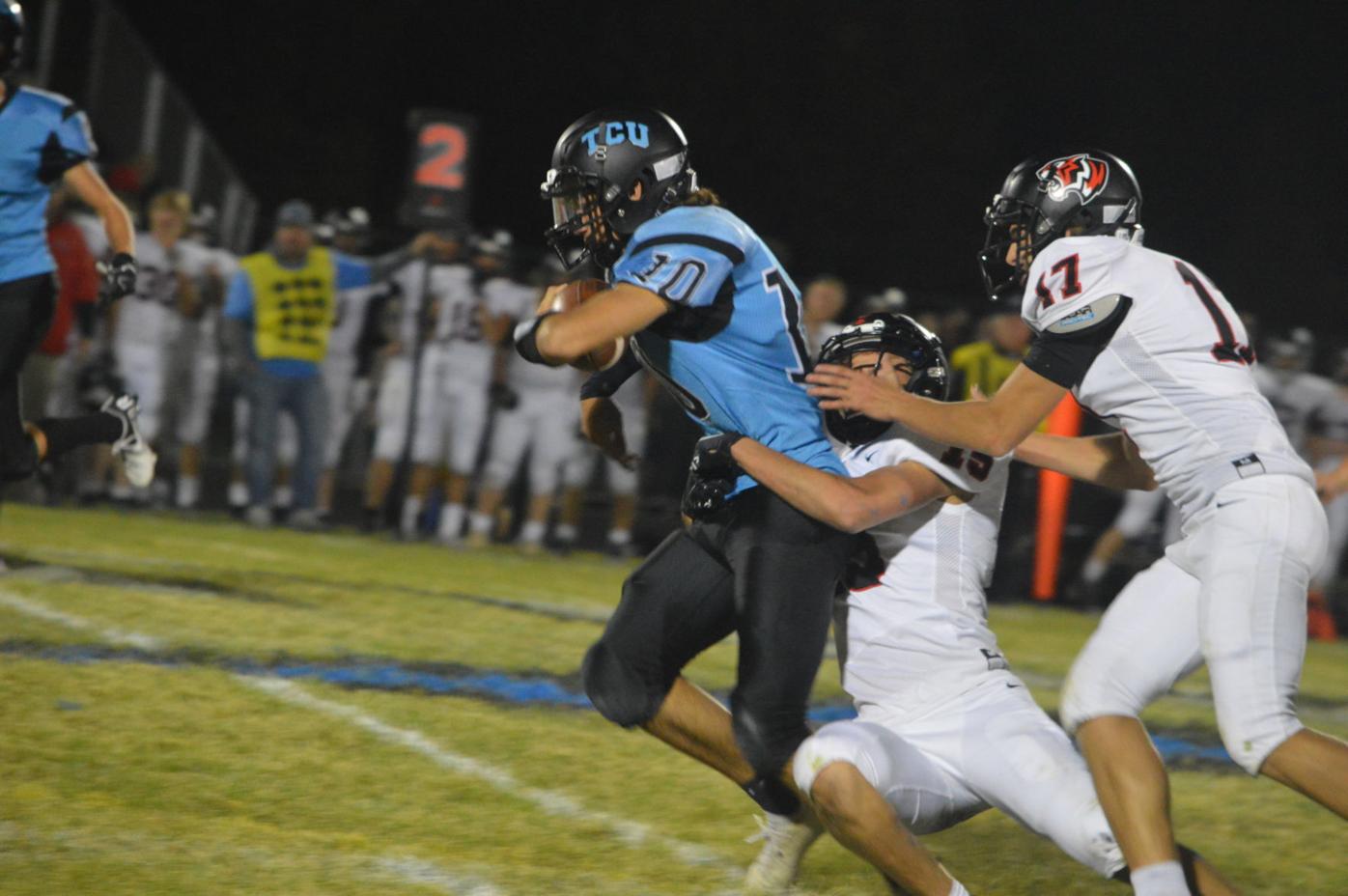 Payton Hennen earns a first down for the Titans before being brought down by Belle Plaine. 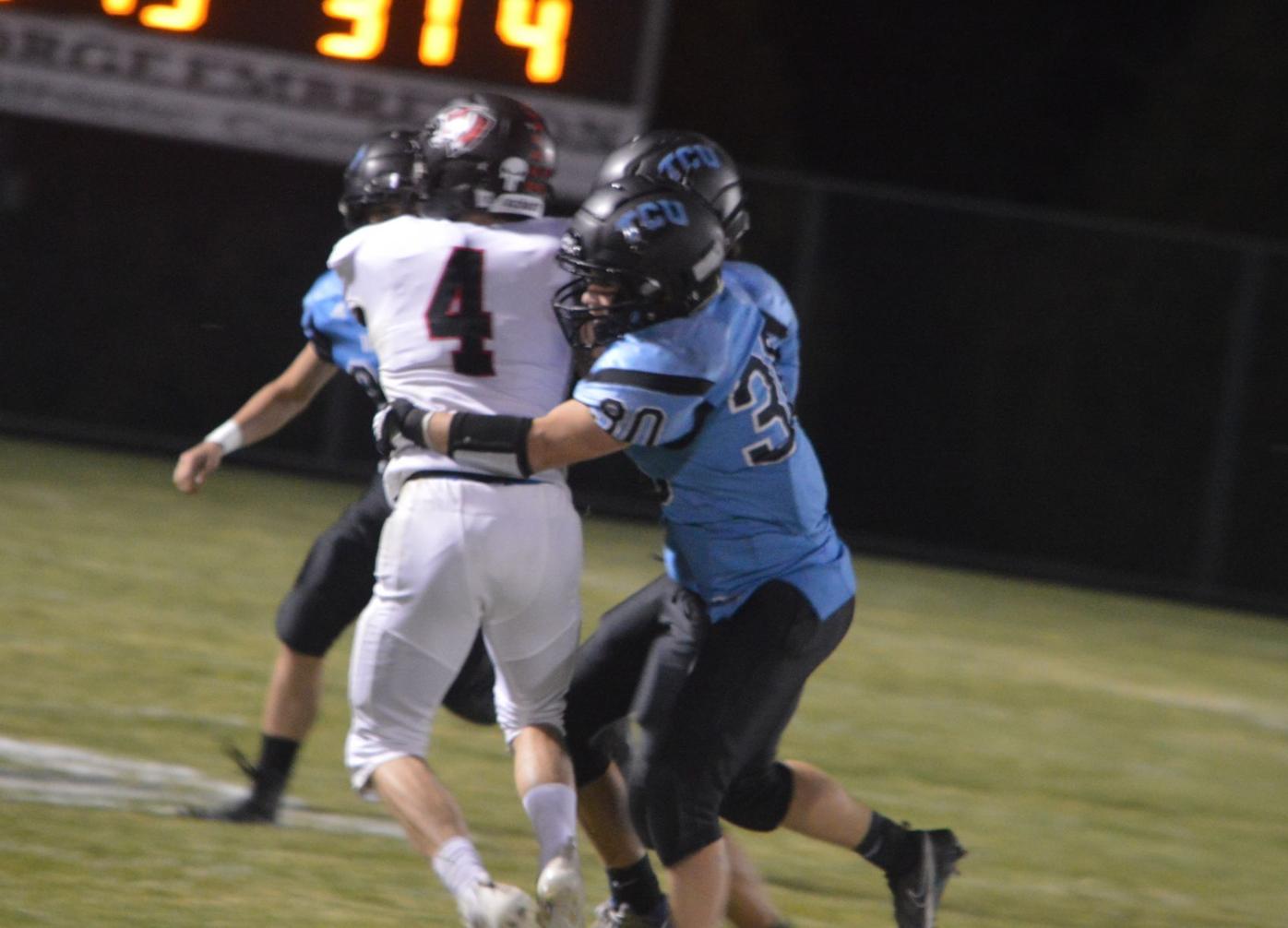 Linebacker Carter O’Malley stops a Tiger in his tracks with an assisted tackle. (Carson Hughes photos/southernminn.com) 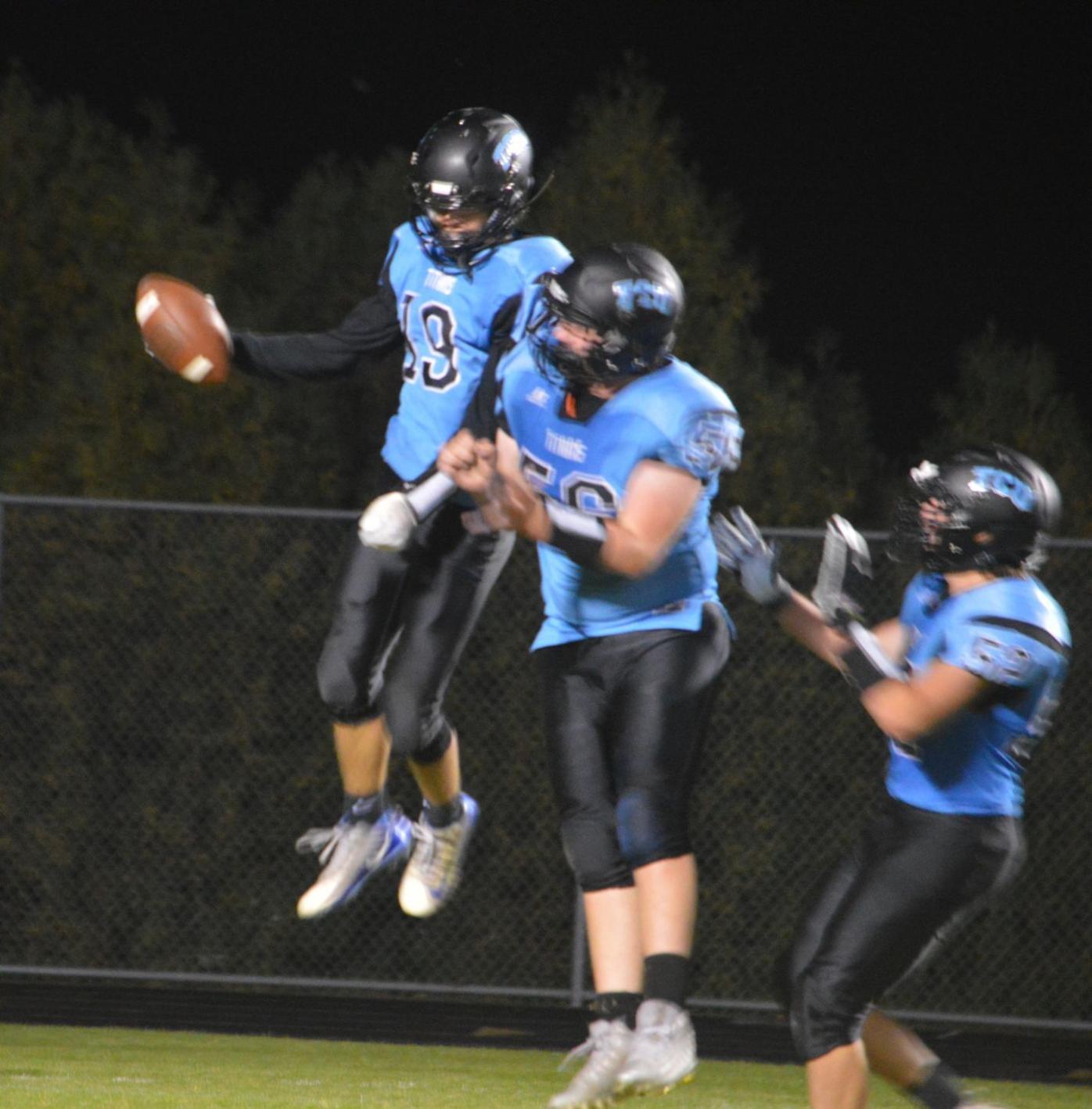 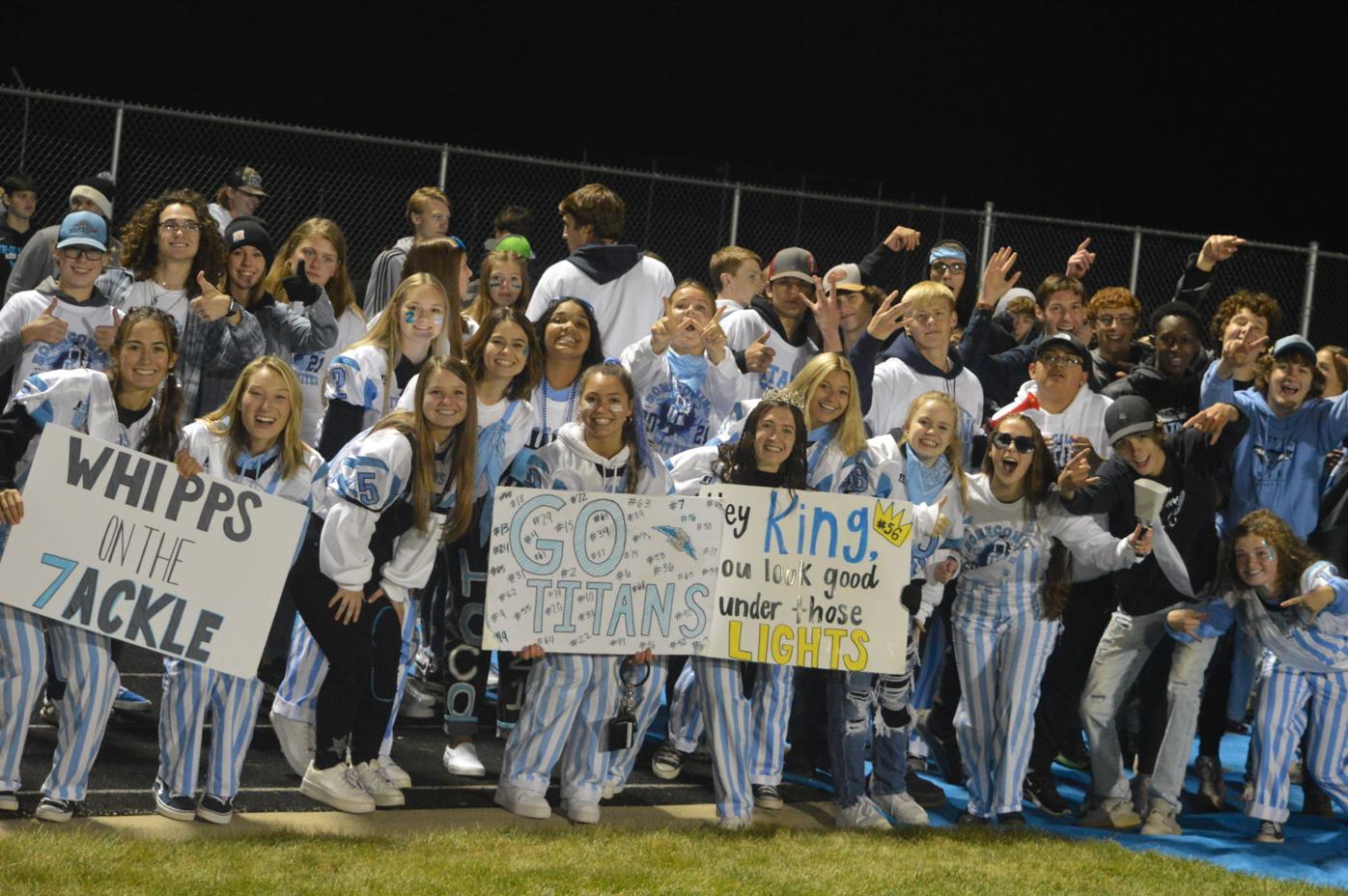 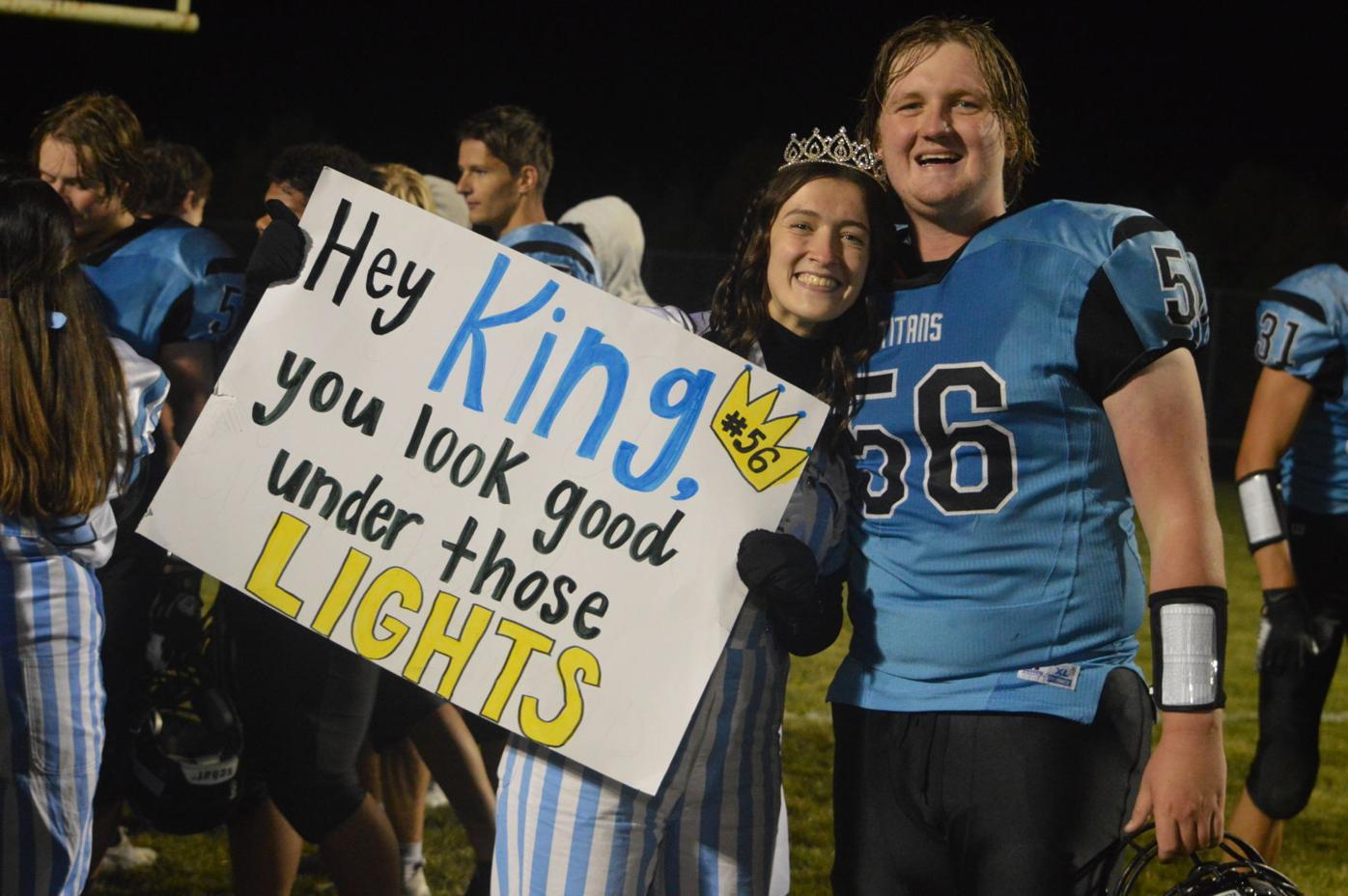 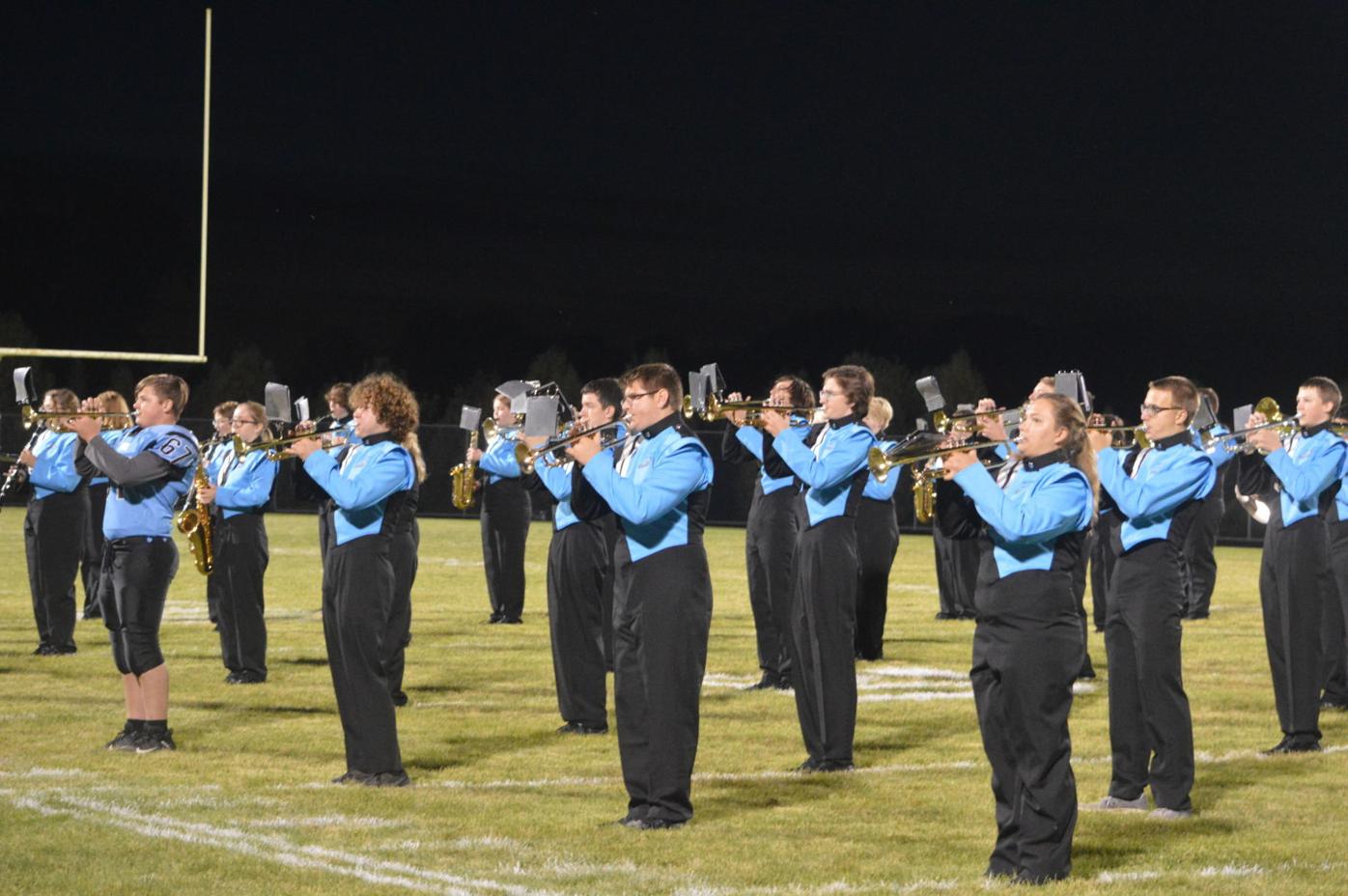 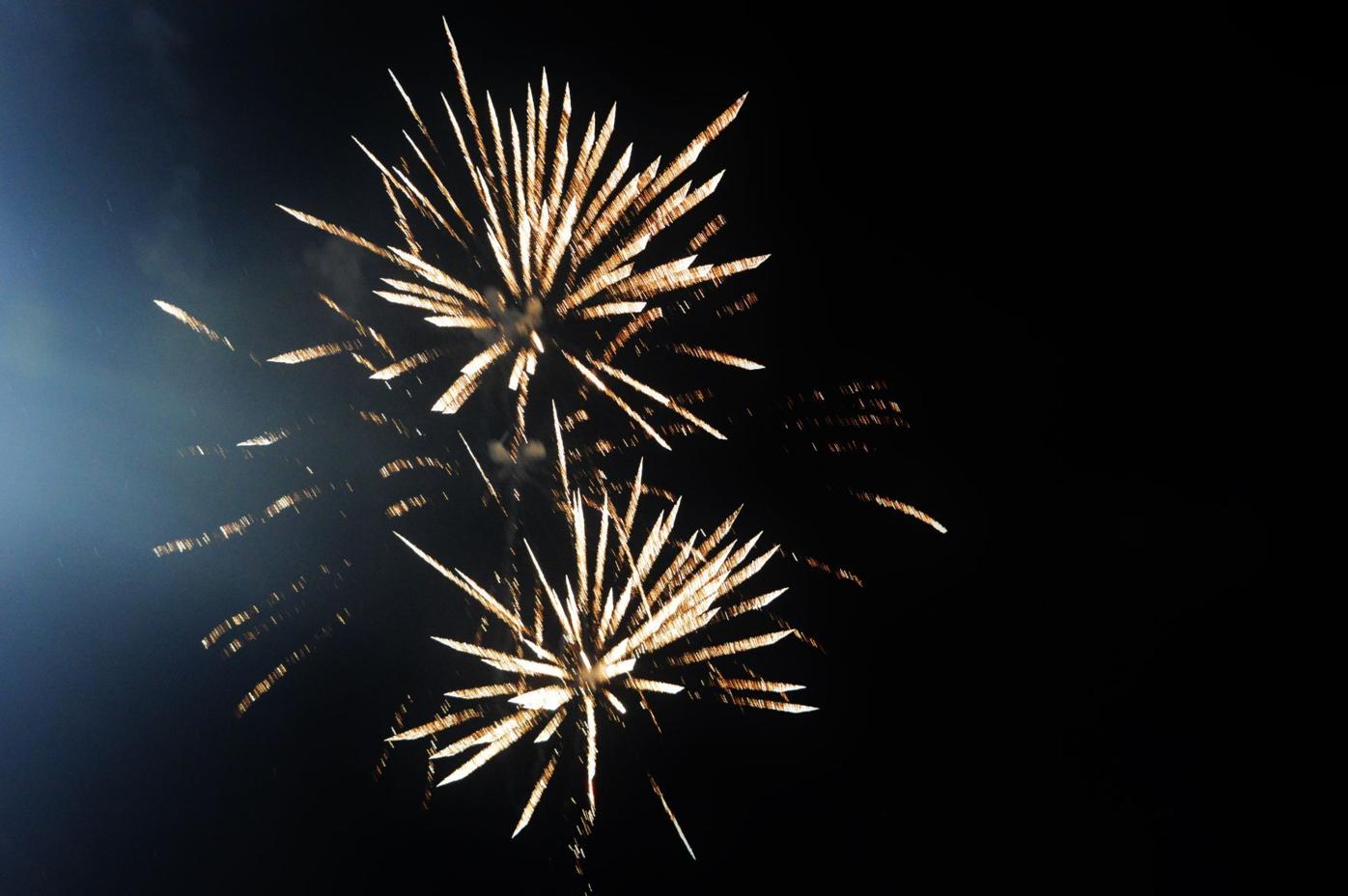 Fireworks shot into the air during the halftime celebration and each time the Titans football team scored a touchdown. (Carson Hughes/southernminn.com) 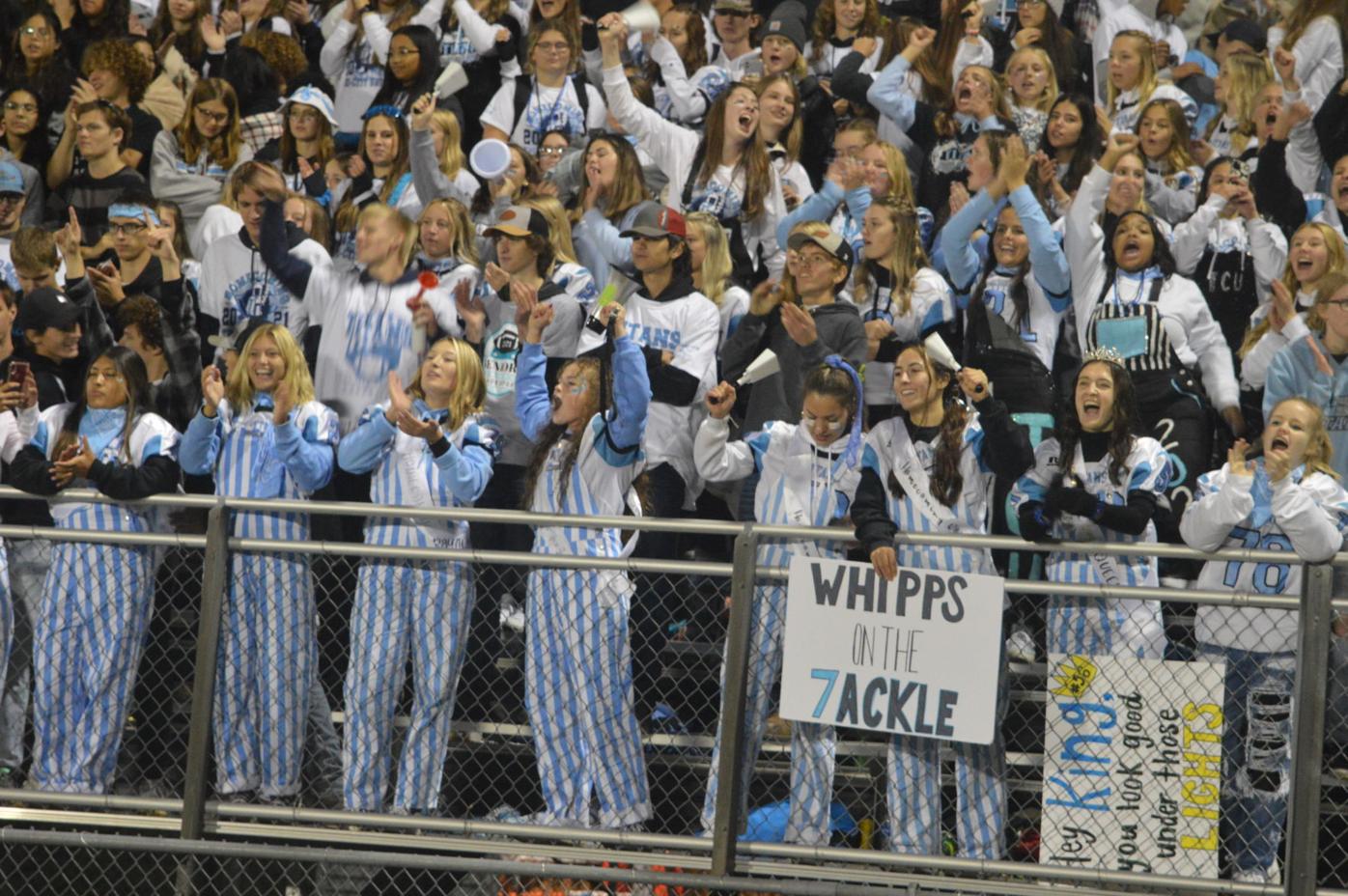 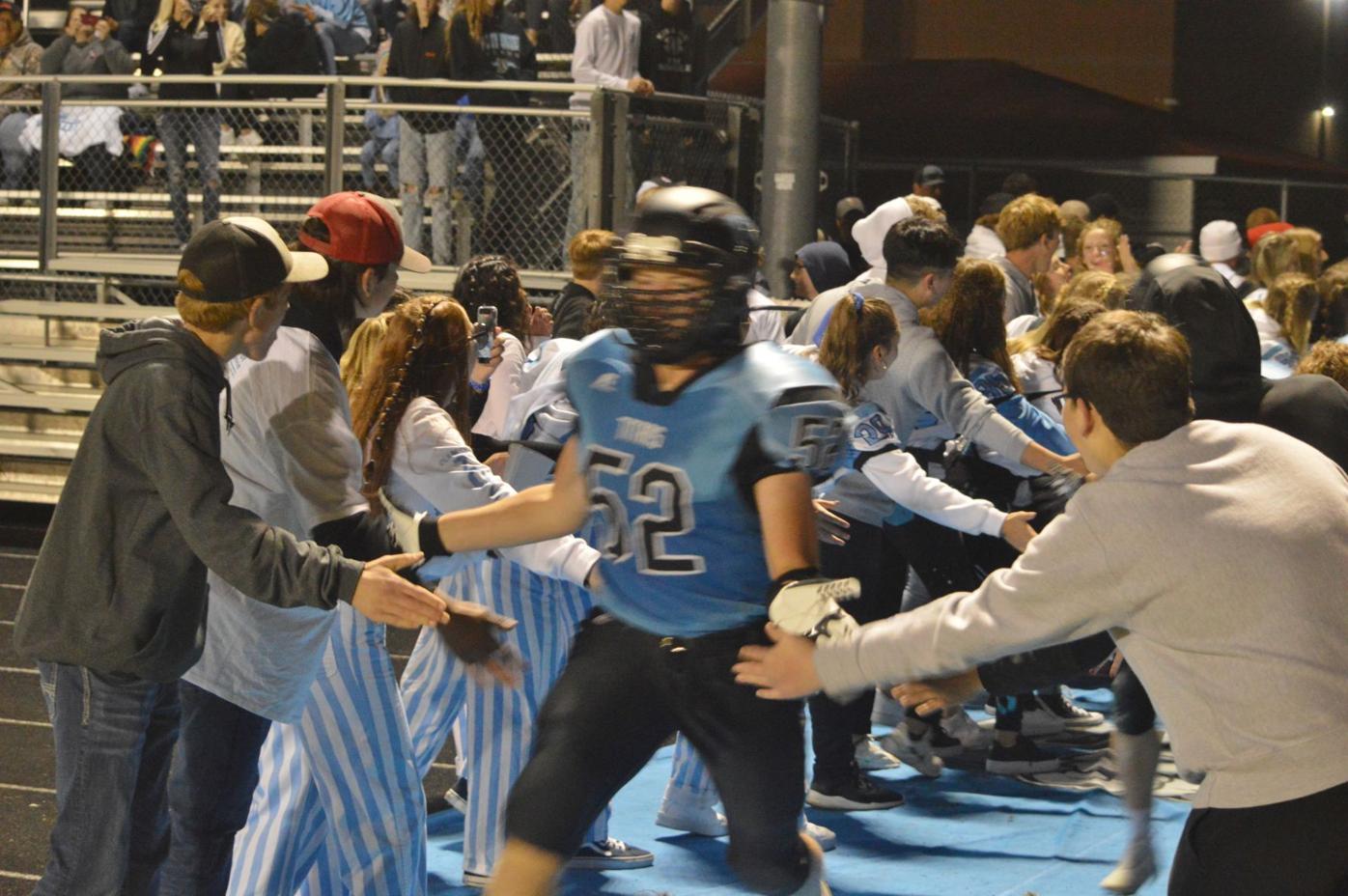 TCU Students greeted the Titans football team with cheers as they entered the field after halftime. (Carson Hughes/southernminn.com)

The Tri-City United football team ended Homecoming week with a hard-earned victory over Belle Plaine. The Tigers were a competitive foe, and the Titans were forced to get creative to put points on the board. Nevertheless, TCU earned the edge with a 26-13 victory.

TCU’s success could be credited to the combo of quarterback Payton Hennen and wide receiver Adam Henze. Hennen produced 81 yards passing, Henze contributed 80 yards catching, and the duo earned two touchdowns for the Titans in a game where every point mattered.

After a slow start, TCU's Henry Schendel scored on a 23-yard touchdown run in the first quarter with two minutes left on the clock. Fireworks erupted from behind the end zone in celebration of the Titans’ first Homecoming touchdown.

The team then attempted but was unsuccessful in a two-point conversion run. Losing extra scoring opportunities became a chronic issue for the Titans, allowing Belle Plaine to get too close for comfort.

Approximately a third of the way through the second quarter, Belle Plaine stole the lead from TCU. After an aggressive push into the Titans’ territory, Belle Plaine threw a successful 11-yard pass into the end zone and kicked an extra point to top the Titans 7-6.

Hennen and Henze quickly took back the lead. About 29 yards from the end zone, Hennen connected with Henze for a TD. Due to another unsuccessful conversion run, the Titans held a slim lead at 12-7.

After breaking for halftime, the Titans offensive line was fully rejuvenated when they hit the field. Determined to create some distance between themselves and Belle Plaine, the TCU players came out flying. On a pass from Hennen, Henze took the ball 42 yards to score the Titans third touchdown. Marco Reyes then caught the two-point conversion pass, boosting the Titans to a 20-7 lead.

As the third quarter wore on, the Tigers slowly backed the Titans near their own end zone. But the TCU defense held up, and stopped Belle Plaine from scoring, taking possession of the ball at the six-yard line.

Then, in a stunning offensive play, Hennen rushed past the Tigers defensive line and kept on running. Belle Plaine attempted to catch up, but Hennen ran 94 yards all the way to the end zone. This would've been the Titans' biggest play of the season, but it was called off due to a holding penalty.

Belle Plaine wasn’t held back for long. In a fourth quarter plagued by errors, the away team turned an 11-yard run into a touchdown to narrow the score to 20-13.

The Titans wanted another score to stay ahead, but Belle Plaine wasn’t about to give it up. The Titans’ offensive line knocked the Tigers back up against the goal line, but TCU lost possession of the ball to the Tigers before scoring.

After the turnover, TCU’s defense needed to keep the Tigers penned in at their own goal line. On two passing attempts, the Titans knocked the ball out of the air to prevent a first down.

Belle Plaine turned to punting on fourth down, but TCU's Hank Holicky jumped in front to block. As the ball fell to the ground, Tyler Gaudreau leapt on top of it to score a touchdown. Up 26-13 with around 2 minutes left on the clock, the Titans stalled Belle Plaine's last push and made their school proud.

“Anytime you can come out with a win, regardless of how the game goes, you got to be happy. I give credit to Belle Plaine, though, they put us in some tough situations,” said Coach Matt Collins. “There was a huge blocked punt at the end to give us some cushion. A lot of unfortunate mistakes led up to us needing that big play in that situation, but we have to give big credit to Belle Plaine, because they battled for four quarters.”