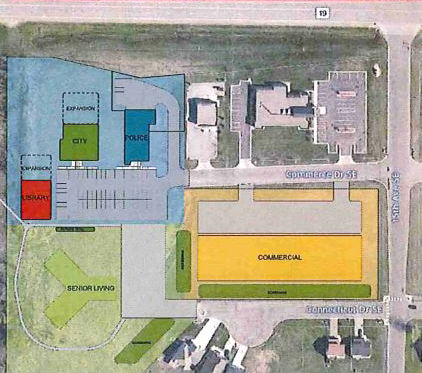 In the further future, the Lonsdale public safety facility, planned for next year, will share a parking lot with a City Hall and library. (Image courtesy of Wold Architects and Engineers) 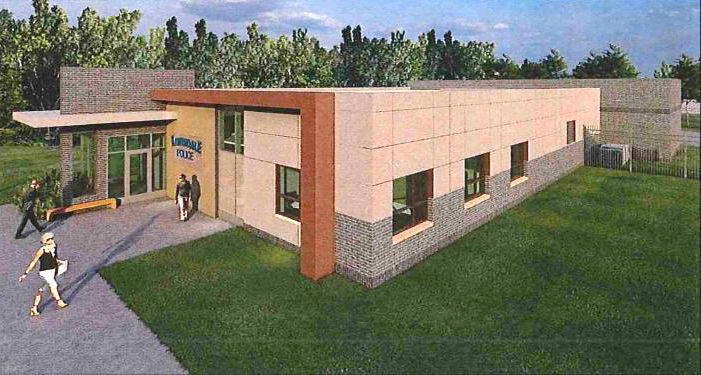 A combination of precast panels and brick will make up the exterior of the up and coming Lonsdale public safety facility. (image courtesy of Wold Architects and Engineers)

Construction won’t begin until 2021, but the vision for the new Lonsdale police facility is becoming more concrete.

Wold Architects and Engineers have been working with Lonsdale city staff and the police department throughout this year to plan for a more spacious and up-to-code police facility, keeping in mind the long term plan of building a city hall and library on the same land.

During the City Council’s virtual meeting Monday, Nov. 30, Melissa Stein of Wold presented an update on the site plan, building plan, and additional exterior concepts. She also showed the council pictures of the building materials and provided an update on the project budget and schedule moving forward.

The City Council unanimously approved the final plans and specifications for the proposed public safety facility.

Since presenting to the City Council the last time, Stein’s team made a couple of minor adjustments to the parking lot and added a secure fence on the back property lines. These changes allow for improved snow piling.

The layout of the building hadn’t changed since Stein’s previous presentation to the council. The vestibule is to the north, on the left hand side when facing the building. That leads right into the lobby, where there will be access points to the interview room or conference room. For the police department, Stein said the one caveat is the lobby does not lead into the break room.

Councilor Steve Cherney asked if builders talked about connecting the buildings, once they’ve all been built, with indoor hallways.

While the Wold team explored that possibility, and it isn’t totally off the table, Stein said the police station and future City Hall wouldn’t share many spaces to warrant a connecting hallway.

“We didn’t want the combined facility to hinder the design of the police department,” Stein said.

In the past, the council wanted to have seven stalls for the garage. But to cut back on expenses and stay within the proposed budget, Stein and her team eliminated two stalls from the original plan. At a previous meeting, the council weighed the pros and cons of that adjustment.

At the most recent meeting, Stein presented a plan with two additional garage stalls to the west, again totaling seven, to bid as an alternative. Looking at the concept, Councilor Kevin Kodada asked if there was a possibility in making the northernmost garage stall double deep to allow for more parking. Stein said that idea hadn’t been explored, since the generator is located in the empty space behind the northernmost stall.

Stein also showed the council images of the materials for the building’s exterior and interior. A beige gray precast paneling will make up the majority of the exterior along with an accent color of precast paneling at the front entry.

Bricks will align the bottom of some of the precast walls, and builders will use a darker accent brick for the wall with the entrance door. The field brick will be integrated right into the precast panel for both the police facility and its garage.

On a project budget of $2.2 million, Stein said the estimates came back a little higher than that. However, after making adjustments to the curb and gutter outside, the cost now fits within the budget.

The project schedule was pushed back a bit, but Rud said this won’t affect the start of construction in spring 2021. The next steps in the process are to hold a second public open house for the police station on Dec. 8, meet with the Planning Commission on Dec. 14, and seek City Council approval Dec. 21. The project will open for bids on Jan. 19, 2021, and the council will award the contractor Jan. 28.