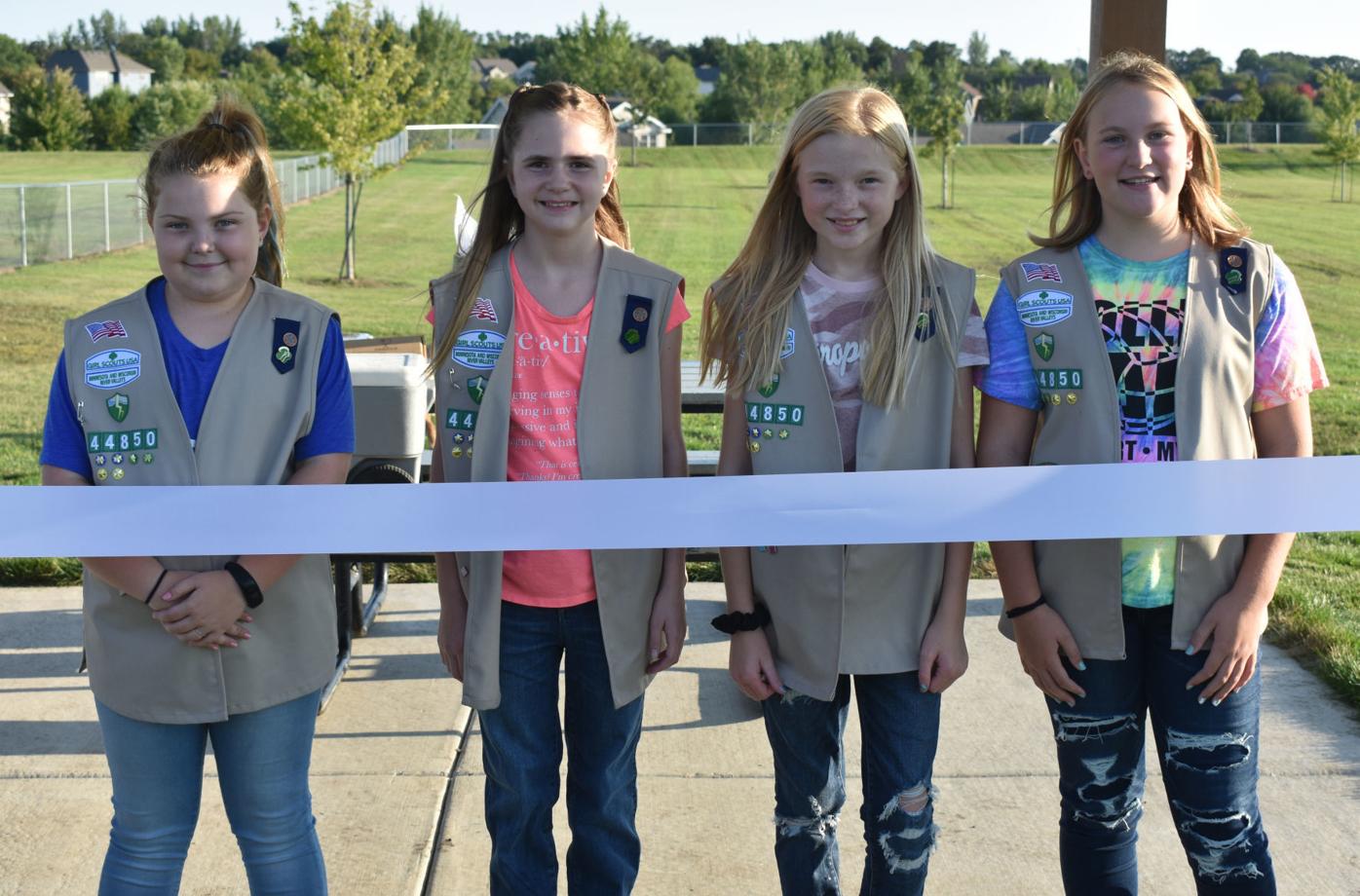 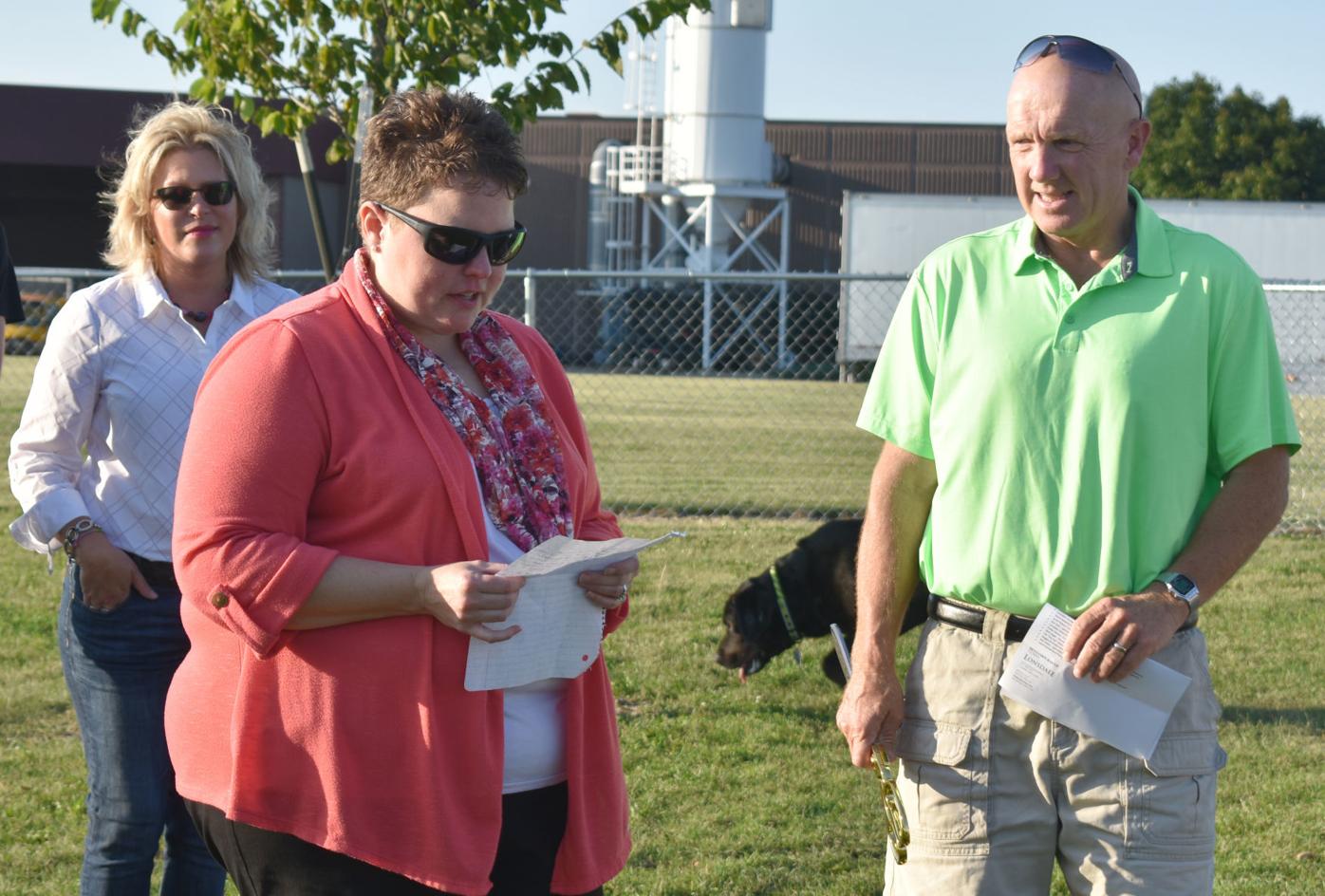 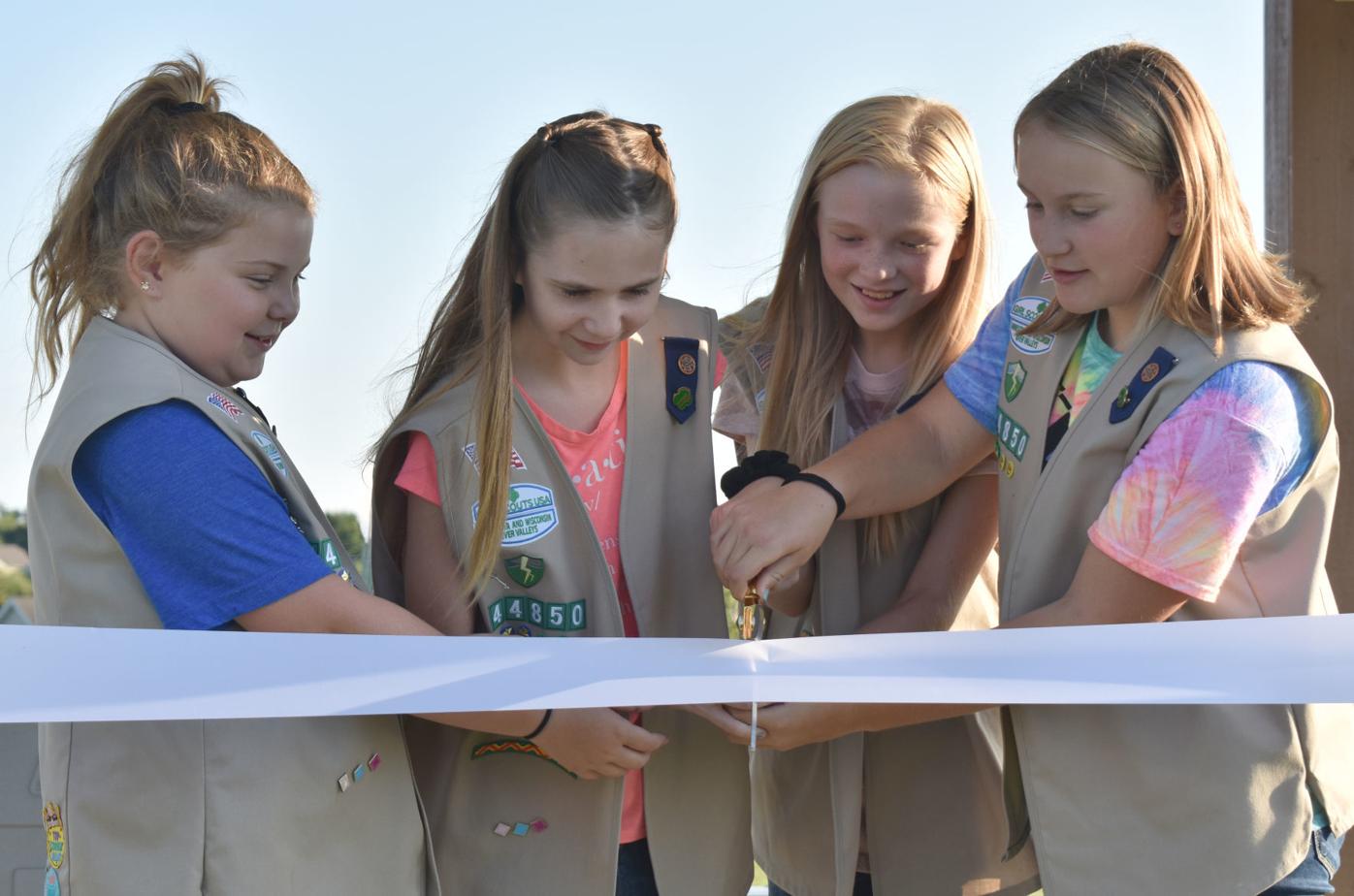 Pictured from left: Emily Boyda, Bella Jones, Lorraine Motz and Bre Erickson get ready to cut the ribbon for the dog park pavilion they helped build over the summer. As a result of their 20 hours of community service, the girls each earned the Bronze Award. (Misty Schwab/Lonsdale News Review) 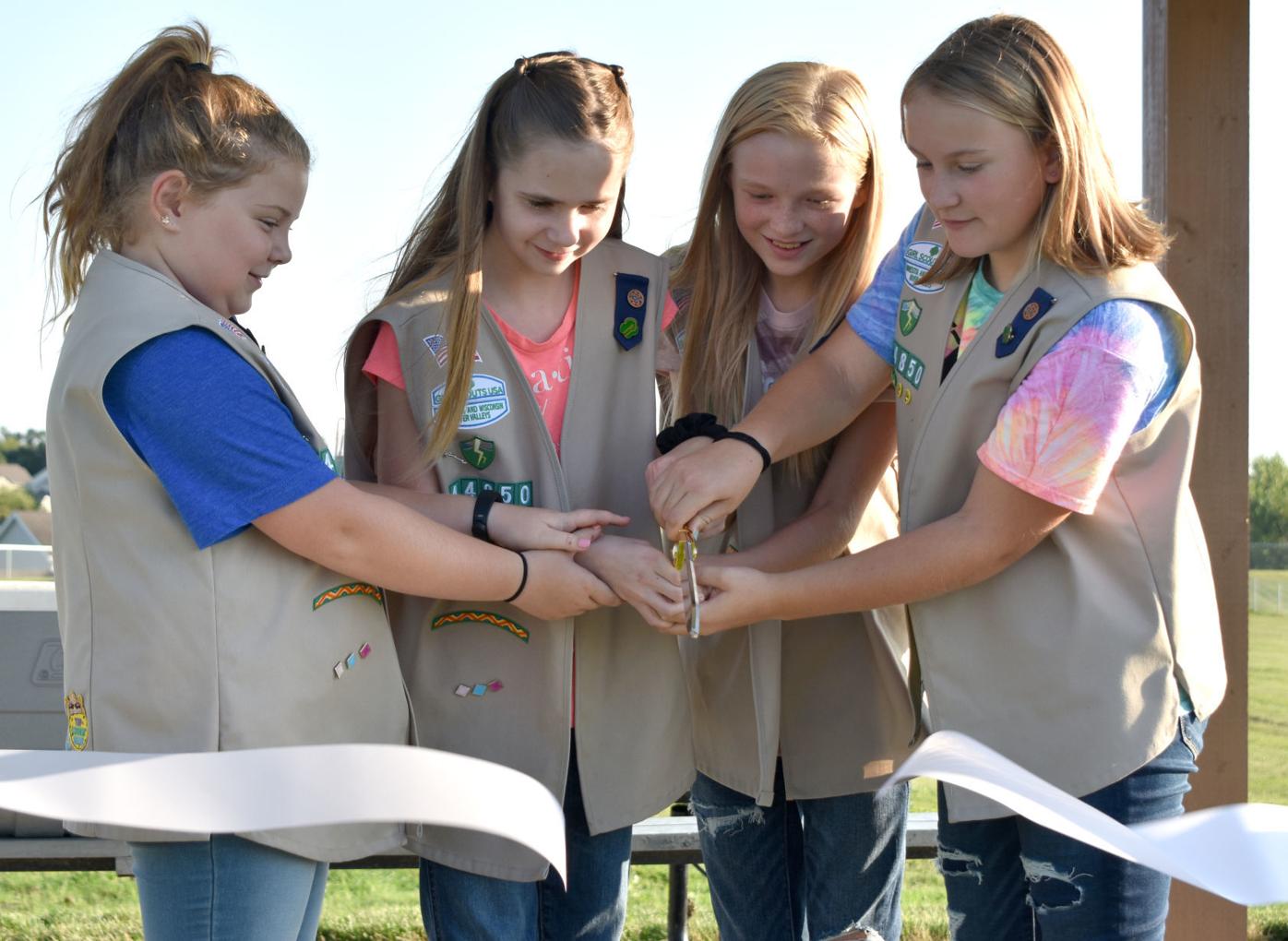 At a grand reopening of the Lonsdale Dog Park, Girl Scouts who helped build the new pavilion and improved other aspects of the park participated in the park’s ribbon cutting. Pictured from left: Emily Boyda, Bella Jones, Lorraine Motz and Bre Erickson. (Misty Schwab/Lonsdale News Review) 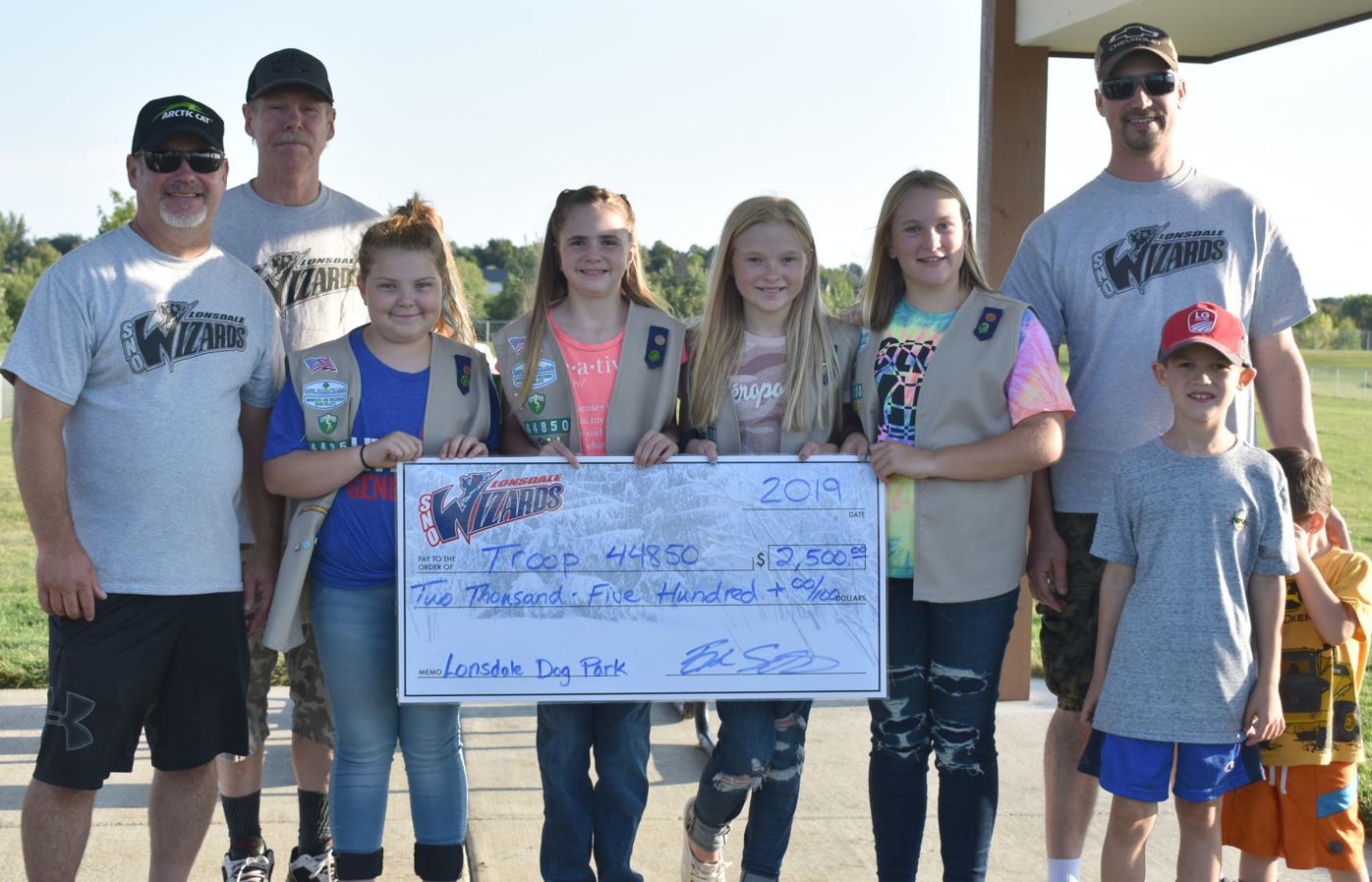 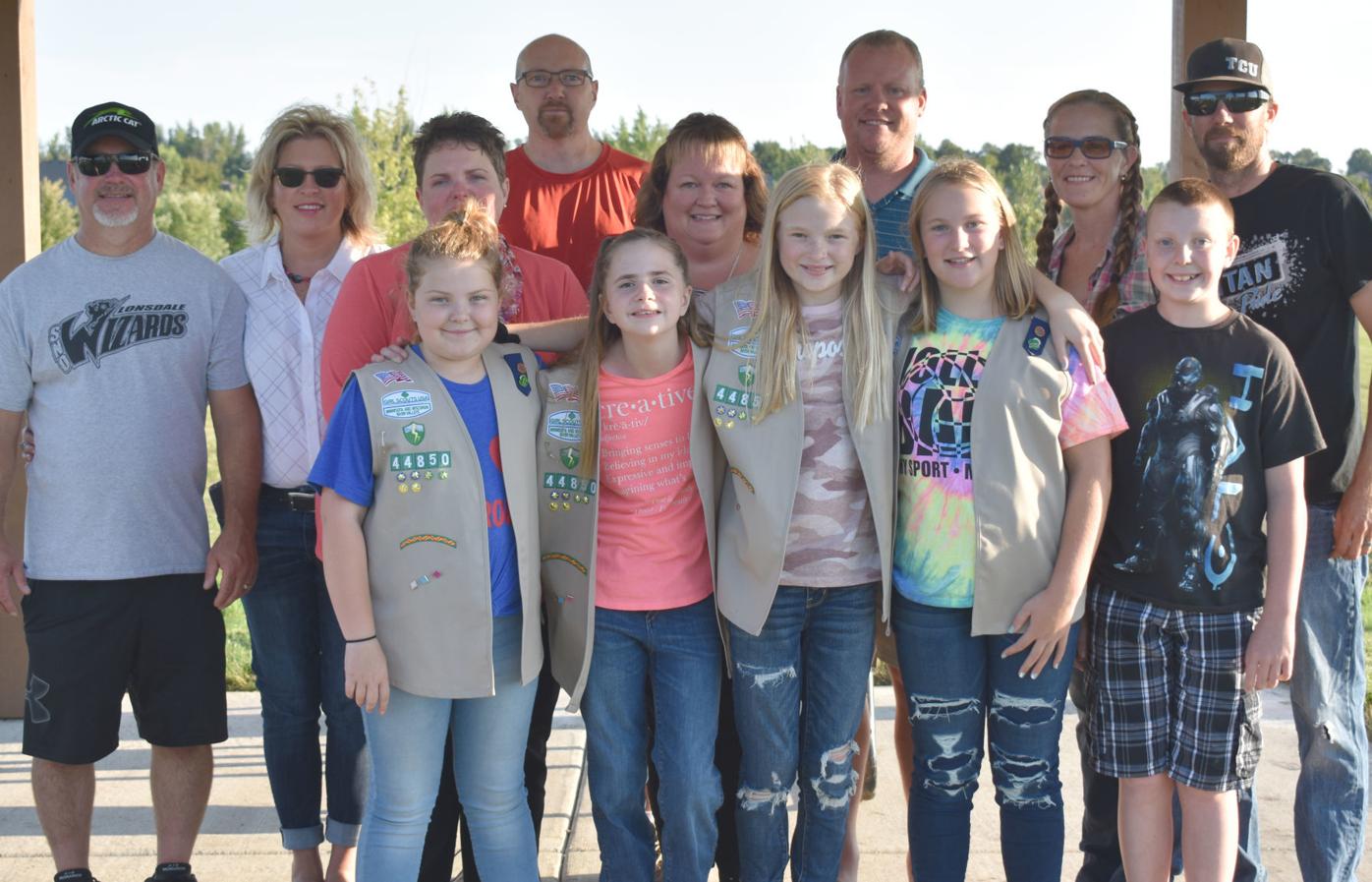 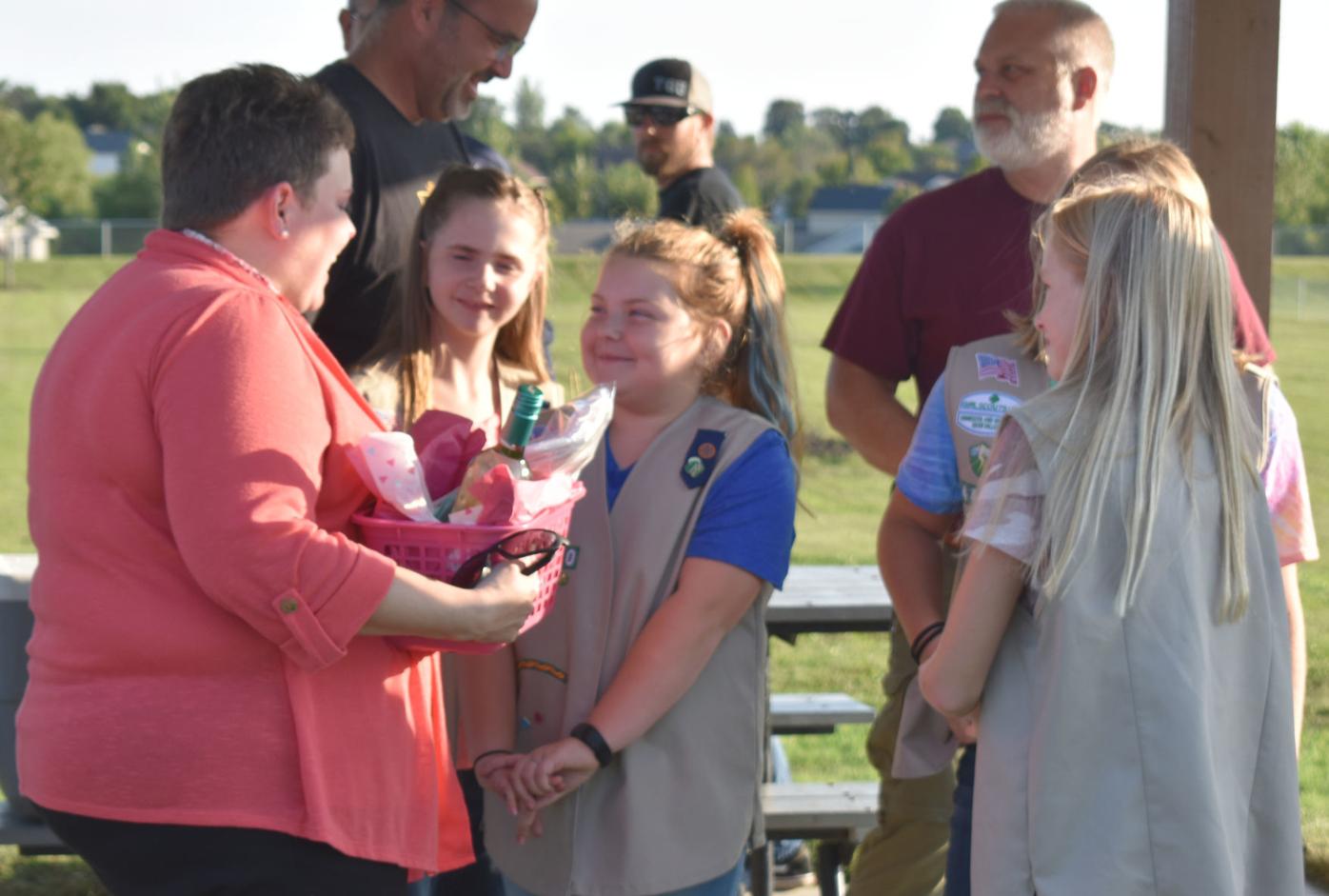 At the ribbon-cutting ceremony for the Lonsdale Dog Park reopening, the Girl Scouts in Troop #44850 gave their troop leader, Beverly Boyda, a gift basket for helping them reach their Bronze Award ranking. (Misty Schwab/Lonsdale News Review) 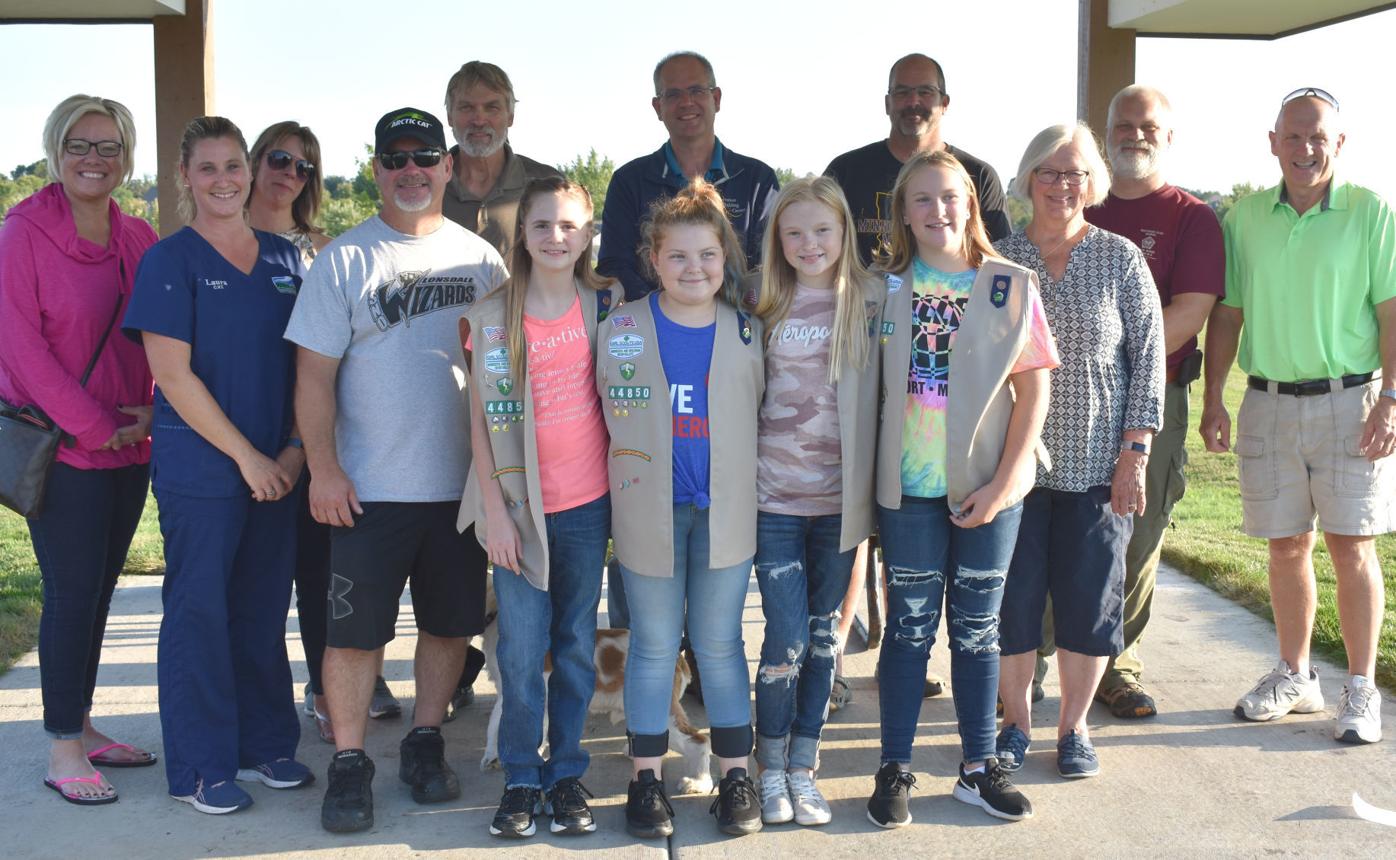 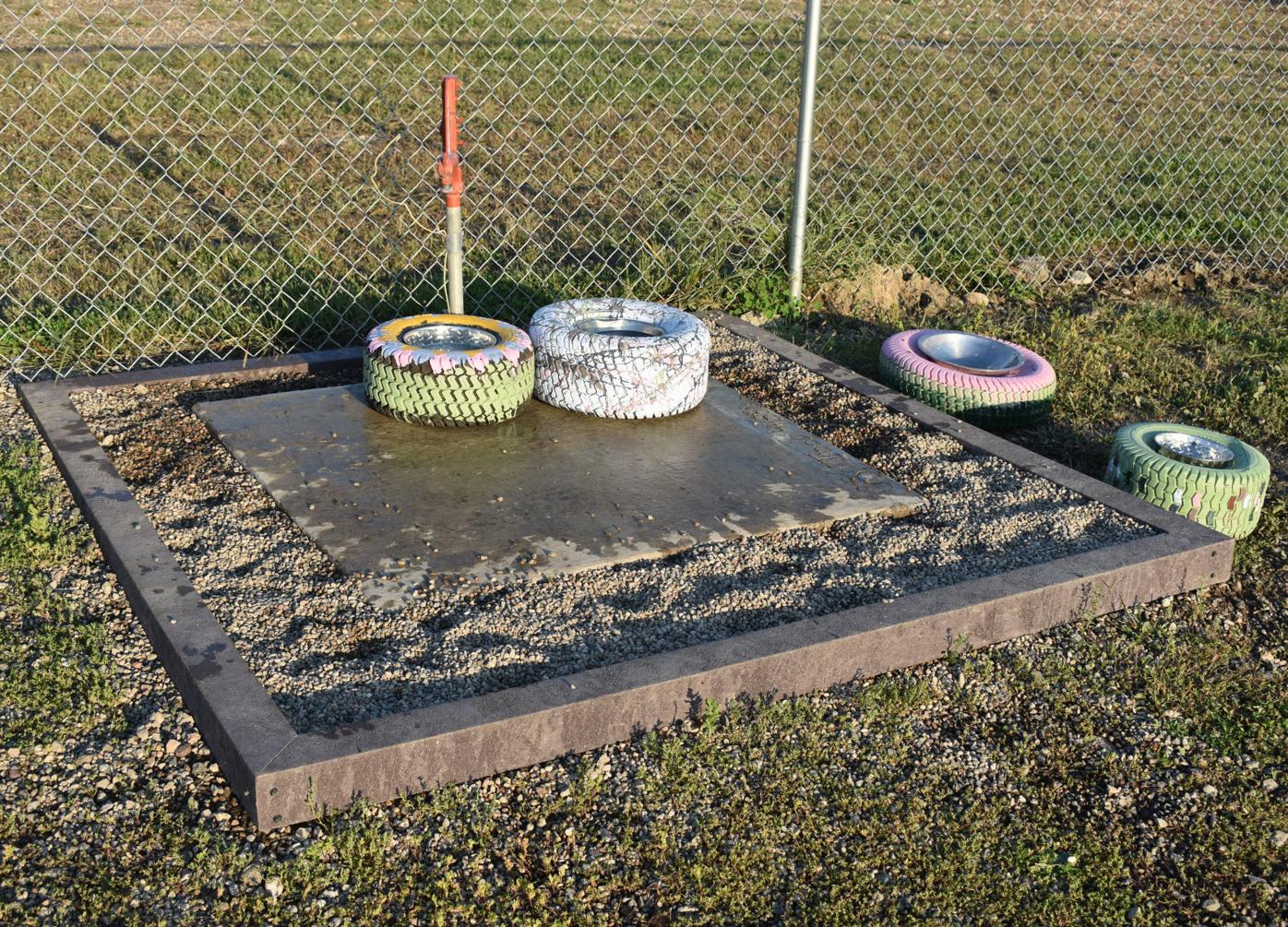 As part of their Bronze Award project, Lonsdale Girl Scouts and their parents installed a concrete slab by the Lonsdale Dog Park yard hydrant to prevent muddy feet and paws. They also painted tires, which can hold dog dishes. (Misty Schwab/Lonsdale News Review) 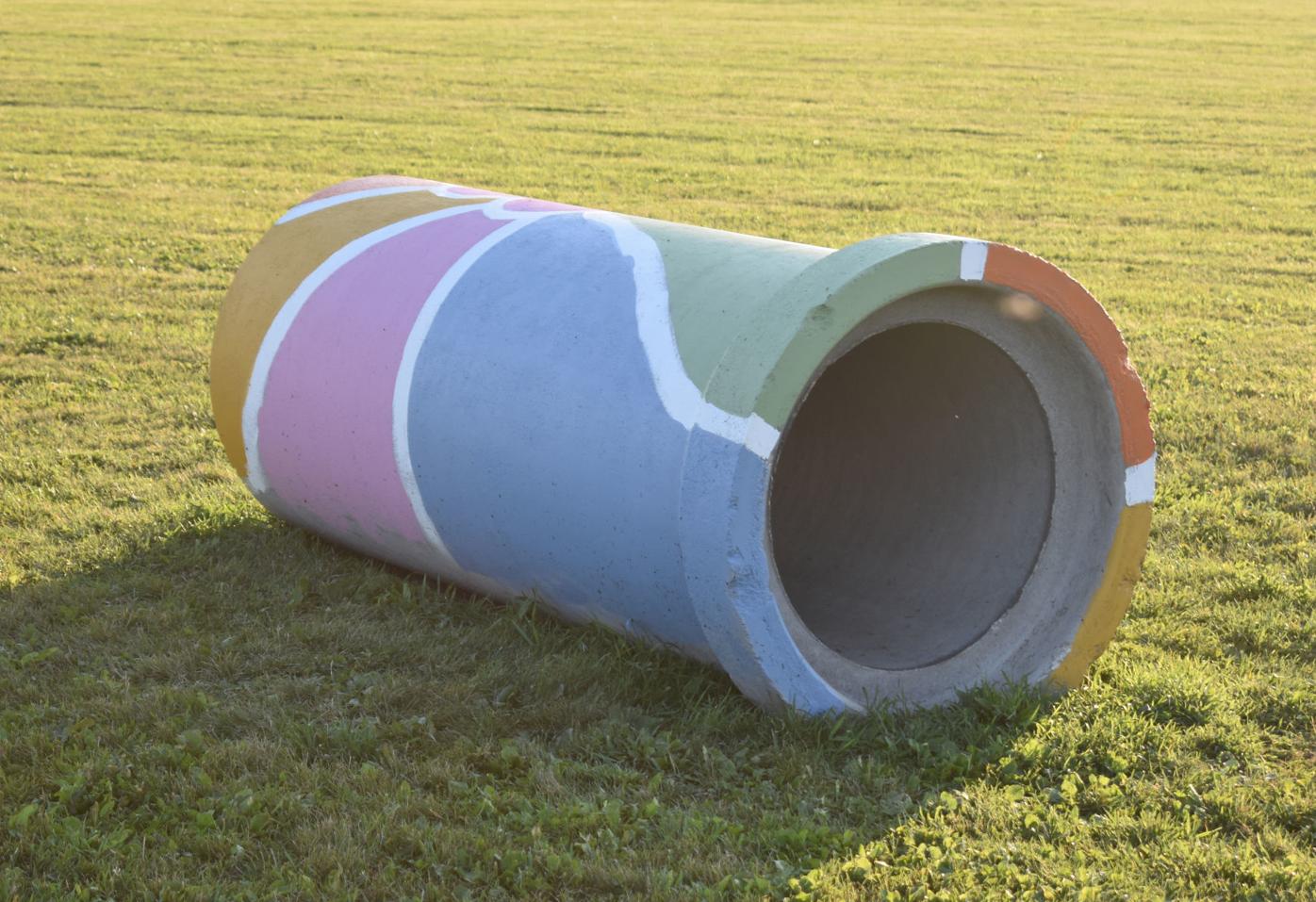 Girl Scouts painted this culvert all colors of the rainbow at the Lonsdale Dog Park. (Misty Schwab/Lonsdale News Review) 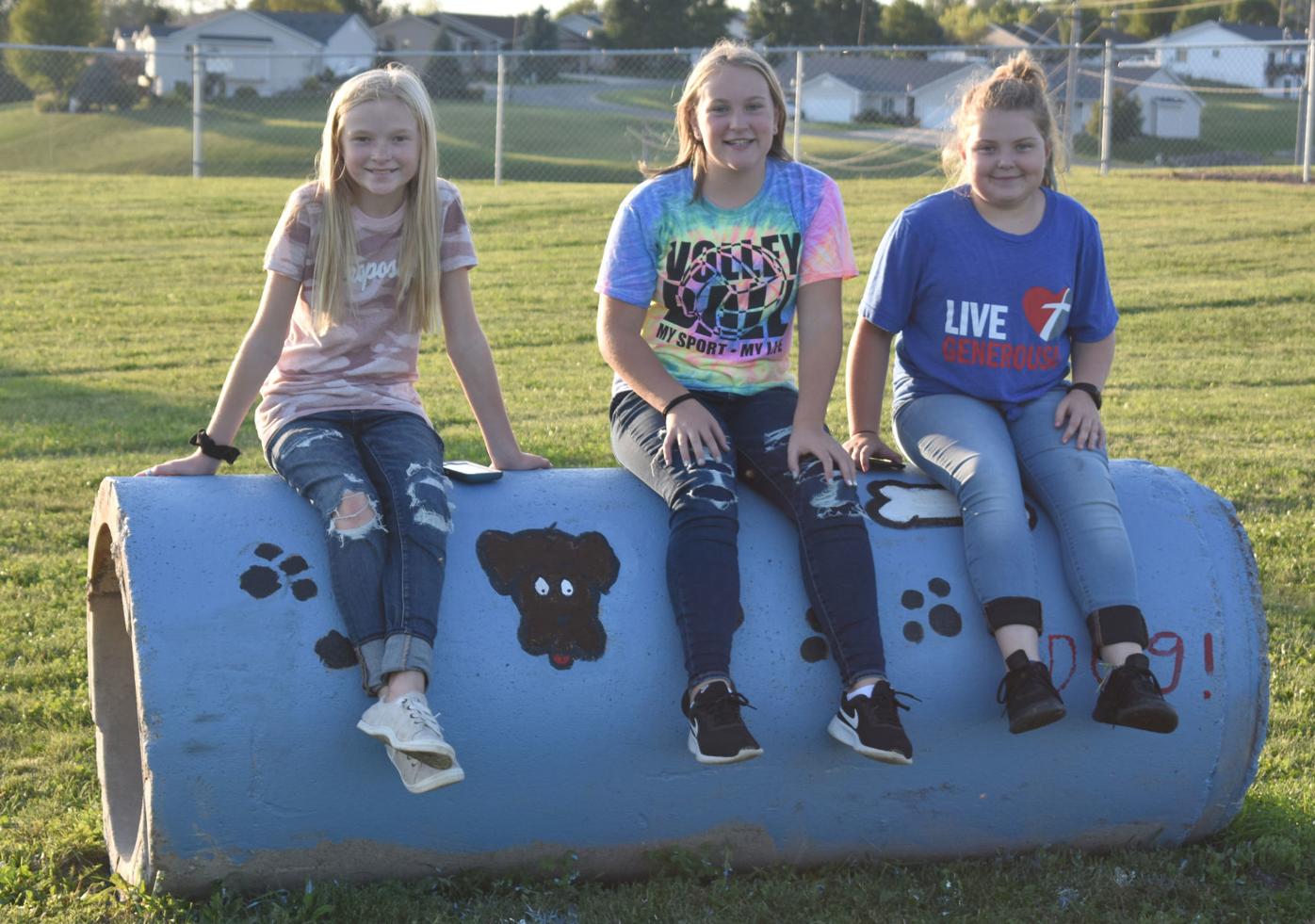 Girl Scouts from left: Lorraine Motz, Bre Erickson and Emily Boyda sit on one of the culverts they painted at the Lonsdale Dog Park. (Misty Schwab/Lonsdale News Review) 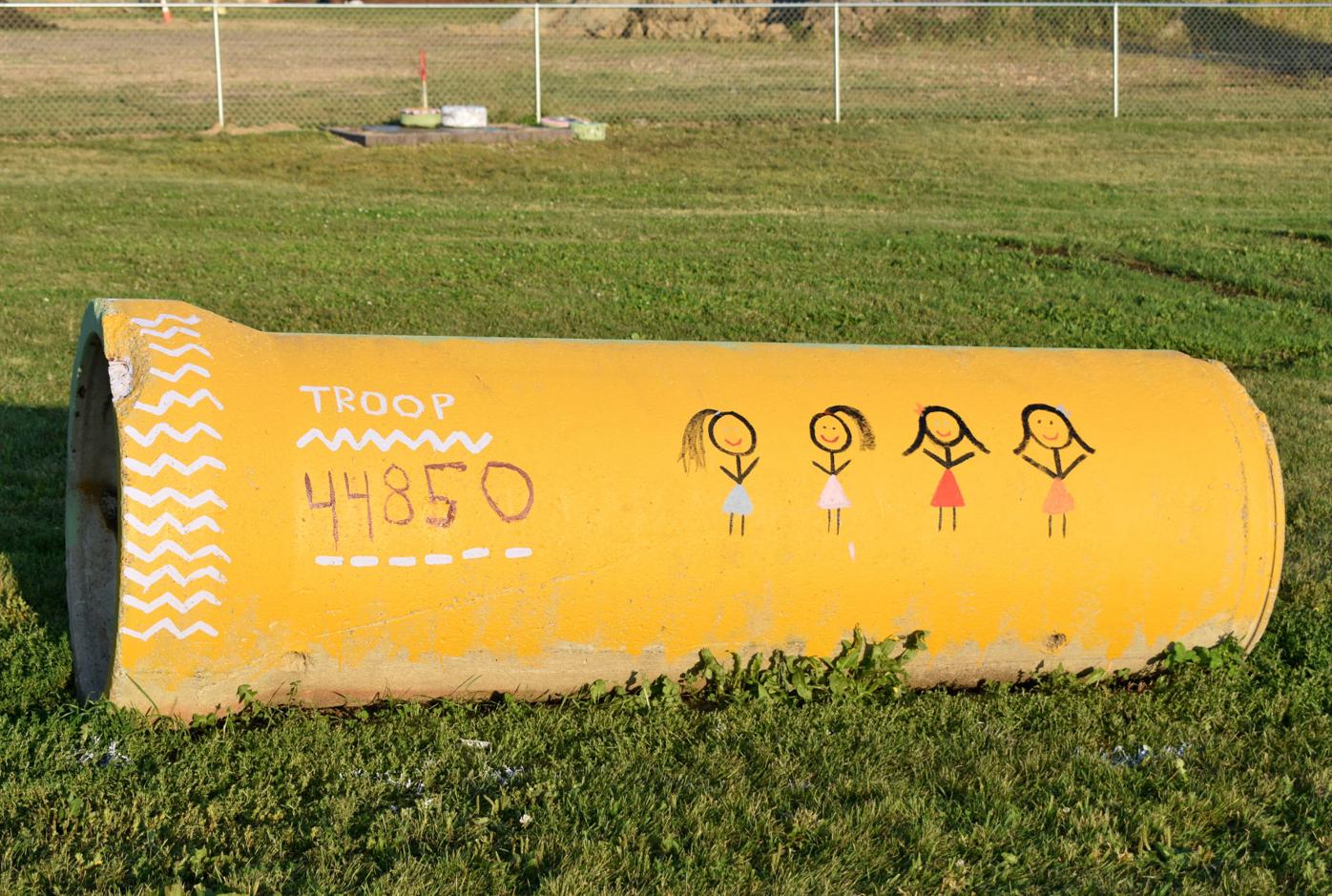 At a grand reopening of the Lonsdale Dog Park, Girl Scouts who helped build the new pavilion and improved other aspects of the park participated in the park’s ribbon cutting. Pictured from left: Emily Boyda, Bella Jones, Lorraine Motz and Bre Erickson. (Misty Schwab/Lonsdale News Review)

The Lonsdale Dog Park is more colorful and welcoming than ever before thanks to a Girl Scouts’ touch.

Troop #44850 Scouts and their parents, along with a number of community donors and volunteers, spent the past several months bringing a new pavilion and other side projects to fruition at the dog park. As a result, the troop’s four members earned their Bronze Award — the highest rank for Junior Girl Scouts.

The troop’s four members, sixth-graders Lorraine Motz, Bre Erickson, Bella Jones and Emily Boyda, agreed that they feel good about the contribution they made to the Dog Park. Community partners and troop leader Beverly Boyda recognized the four girls at a grand “re-opening” ribbon-cutting ceremony Sept. 10.

Before the Girl Scouts completed their projects, dog park users needed to seek shelter across the street at Sticha Park as the dog park lacked any type of pavilion. The new shelter still needs its metal roof, but the project otherwise wrapped up before the start of the school year. The girls set the poles July 5 and worked every weekend they were available, sometimes from 8 a.m. to 3 p.m.

“It was fun; it was a lot of work,” said Andi Motz, mother of Lorraine. “We enjoyed seeing them actually interested in earning the Bronze Award, even after learning it would be 20 hours of volunteering.”

Beverly Boyda, Emily’s mom and troop leader, added that the community involvement made the project worthwhile.

The girls and their parents, plus Bella’s grandfather Gary Kassa, did the manual labor for the project with advice from community members like Pat Maloney, Ron Stoos and Ron Jirik. Reggie and Kristen Scheurer crushed the concrete for the base, and a number of other community partners and individuals made donations and contributions, including Generations Building Center, Lonsdale Hardware, Kevin Malecha of Common Grounds Landscaping, Scott Pelava of Lonsdale Auto Works, the Lonsdale Chamber of Commerce, Lonsdale Public Works, the City of Lonsdale and the Lonsdale Parks and Rec Board.

The biggest monetary donation the Girl Scouts received came from the Lonsdale SnoWizards, which contributed $2,500 to the project. The group’s president and Lorraine’s father, Matt Motz, presented a check to the troop at the ribbon-cutting ceremony with Treasurer/Vice President Eric Schanus and member Roger Gagner.

The troop members also helped resolve another unmet need at the dog park. When patrons wanted to get water for their dogs, they risked getting dirty from stretching over a puddle of mud at the yard hydrant station. As a result, the troop installed a concrete slab at the base of the station and painted tires from Tim’s Small Engine to serve as dog bowl holders.

Adding more color to the dog park, the girls also painted the dog-run culvert tunnels scattered throughout the open field. They and their parents also installed two recycled fire hydrants at the park.

Now that the girls have reached the highest rank as Junior Girl Scouts, their next step, if they choose, is the Silver Award as Girl Scout Cadets. They would have the next three years to earn that rank.