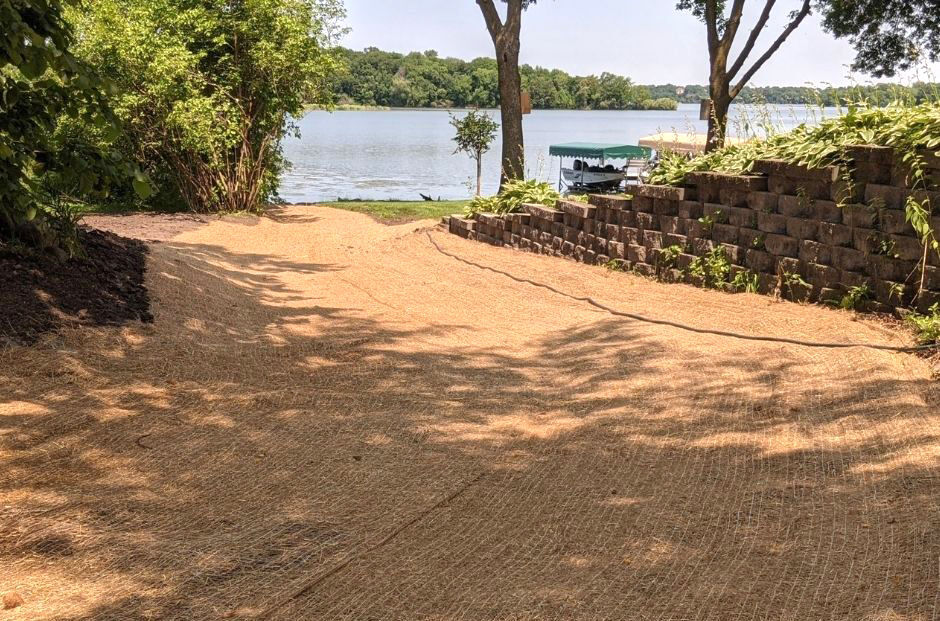 AFTER: The completed project, seen here on July 21, 2021, incorporated new tile and a regraded slope covered by erosion control fabric made of jute. It will keep an estimated 2.1 tons of sediment and 2.1 pounds of phosphorus out of Circle Lake each year. (Photo courtesy of Rice Soil and Water Conservation District) 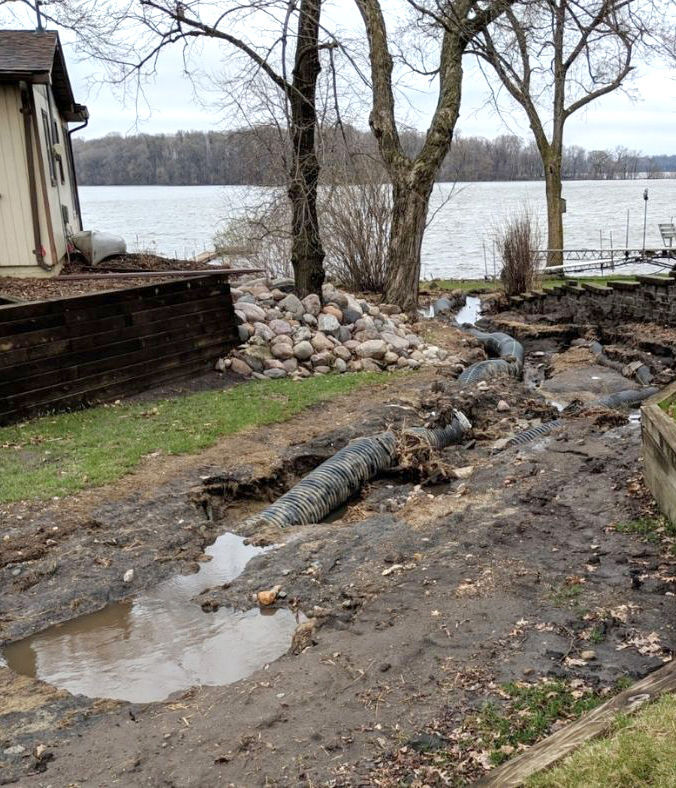 The worsening gully between neighboring properties on Circle Lake southeast of Lonsdale is shown on June 21, 2019. (Photo courtesy of Rice Soil and Water Conservation District)

AFTER: The completed project, seen here on July 21, 2021, incorporated new tile and a regraded slope covered by erosion control fabric made of jute. It will keep an estimated 2.1 tons of sediment and 2.1 pounds of phosphorus out of Circle Lake each year. (Photo courtesy of Rice Soil and Water Conservation District)

The worsening gully between neighboring properties on Circle Lake southeast of Lonsdale is shown on June 21, 2019. (Photo courtesy of Rice Soil and Water Conservation District)

It started out as a simple request, backed by a series of photos shot after a heavy rain. Neighbors Ben and Rachel Streiff and Pete Cook moved to Circle Lake to be close to nature, enjoy outdoor recreation and take in the sunsets. But a growing gully between their two properties threatened that enjoyment.

When the gully persisted after heavy rains washed away their own attempts and a landscaper’s efforts, the neighbors knew it was time to contact the Rice Soil & Water Conservation District.

The 837-acre lake, added to Minnesota’s impaired waters list in 2006 due to excess nutrients, sits on the fringe of the Twin Cities metropolitan area, roughly 7 miles southeast of Lonsdale. The lake is hyper-eutrophic — very nutrient-rich, with frequent and severe algal blooms and low water clarity. It’s also shallow, with a maximum depth of 14 feet. Houses line its shore. The adjacent land is in agricultural production.

“Growing up, my aunt and uncle lived along Mink Lake near Maple Lake, and when I was younger, they did a project and it drastically improved the water. The lake became crystal clear, with bass and sunfish. It was always in my mind with a lake association that’s active and has the lake’s best interest in mind.”

Good things happen when individuals work together with a common goal, Streiff added.

A heavy rain in June 2019 prompted the landowners to contact Rice SWCD.

The land around the drainage tile continued to erode, forming a gully between the Streiff and Cook properties. Sections of the tile were missing or not reinforced.

While both landowners had attempted to stabilize the gully, the erosion continued, and mini sinkholes continued to form. Eventually, the draw between them deteriorated to the point where the retaining wall on Cook’s property and sediment along both yards were washing into the lake. The gully was more than they could repair. A landscaper fixed the site, but subsequent rains washed away the repairs.

Nelson described a sediment plume of soil that entered the lake. Led by Nelson, the JPB determined the best option was to replace the failing tile.

The COVID-19 pandemic added complexity to the project. After Nelson designed it and a contractor was selected, the homeowners learned of statewide PVC piping and materials shortages. The cost of materials fluctuated from $9 to $32 per linear foot. The result: A project redesign.

Frustrated, the homeowners contemplated waiting one year. But after talking to Scheffler and Nelson, they decided to move forward.

Streiff said the new design worked out better — it preserved the privacy they greatly appreciated by retaining a few trees and lilacs that otherwise would have been removed.

“Working with the SWCD was a good experience. We were happy to have them on our side because they know what to look for. We tried ourselves; didn’t work. Hired a landscaper; didn’t work. It’s nice to have an expert in the field explain how it should be and what would work,” said Streiff.

Work finished on July 10. The project’s estimated annual pollution reductions include 2.1 tons of sediment and 2.1 pounds of phosphorus. It’s estimated to curb soil erosion by slightly more than 6 tons a year and will help send cleaner water down the Cannon River.

The $19,225 cost of the project was covered by $15,740 in local capacity funds (a direct Clean Water Fund appropriation from the Minnesota Board of Water & Soil Resources [BWSR] to SWCDs) from two fiscal years for construction, plus technical support from Rice SWCD and the Southeast SWCD Technical Support JPB; and a $3,485 landowner and Circle Lake Improvement District match.

Jennifer Mocol-Johnson is a Board Conservationist with the Minnesota Board of Water & Soil Resources who provided technical and implementation guidance to SWCDs on water quality conservation projects. She can be reached at Jennifer.Mocol-Johnson@state.mn.us.