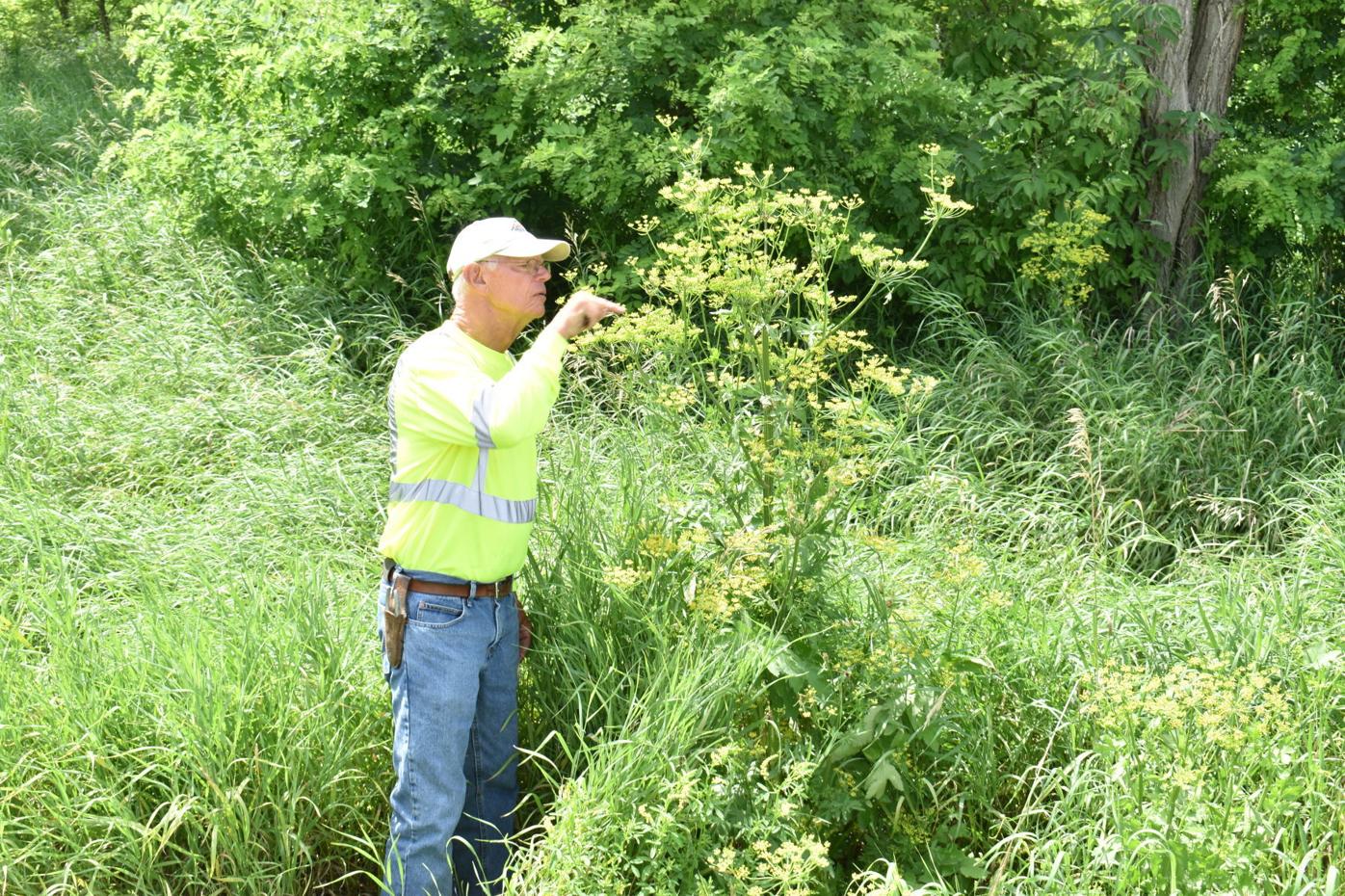 Steve Albers examines a large wild parsnip plant in Northfield Township. The noxious weed can leave awful burns on the skin of anyone who touches the plant. (Andrew Deziel/Faribault Daily News) 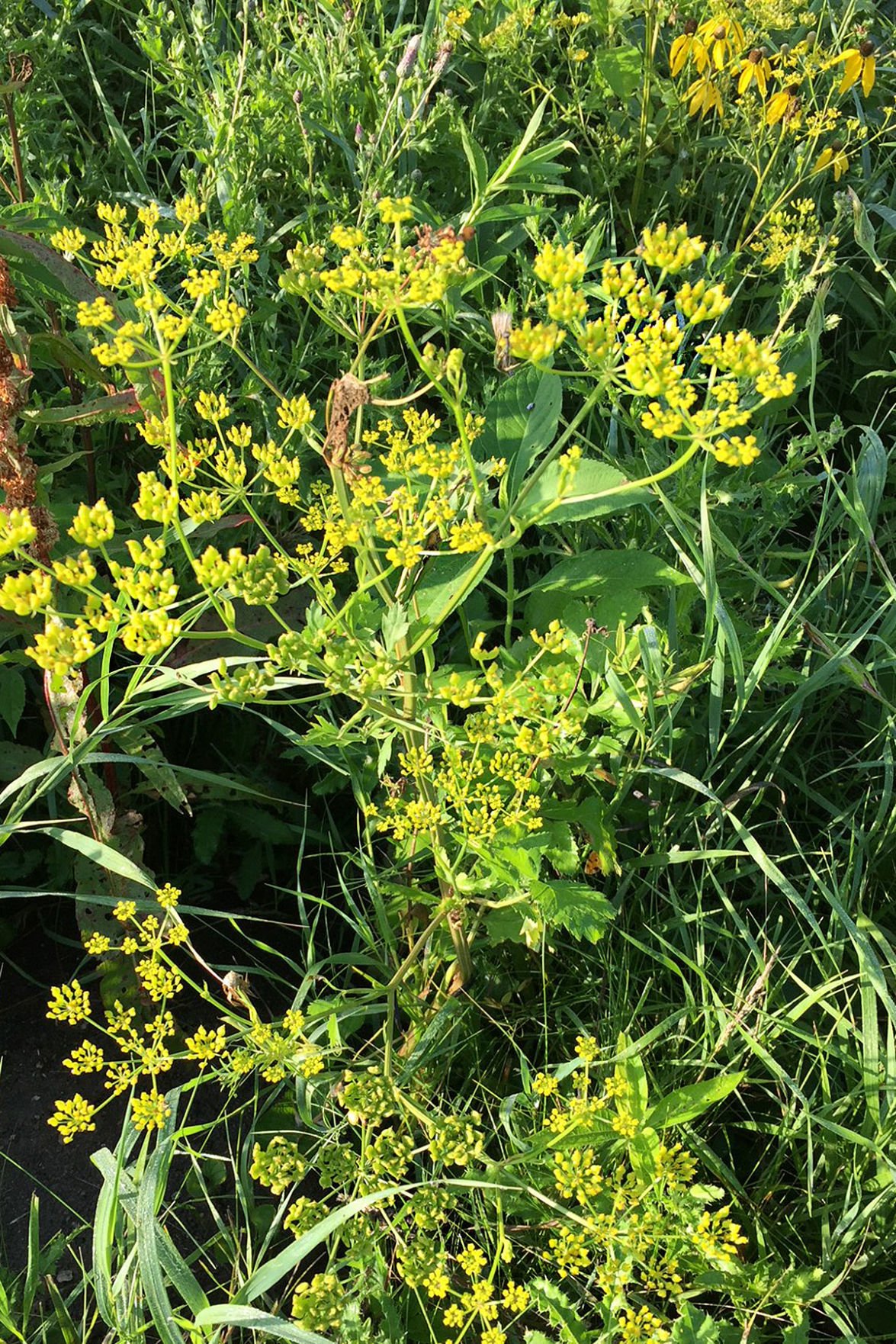 By the end of June, wild parsnip begins to flower and the tiny yellow flowers are visible on tall stalks. If not cut, the seeds will mature and fall to the soil, setting the stage for the invasive plant to spread even more in the coming years. (APG Media file photo) 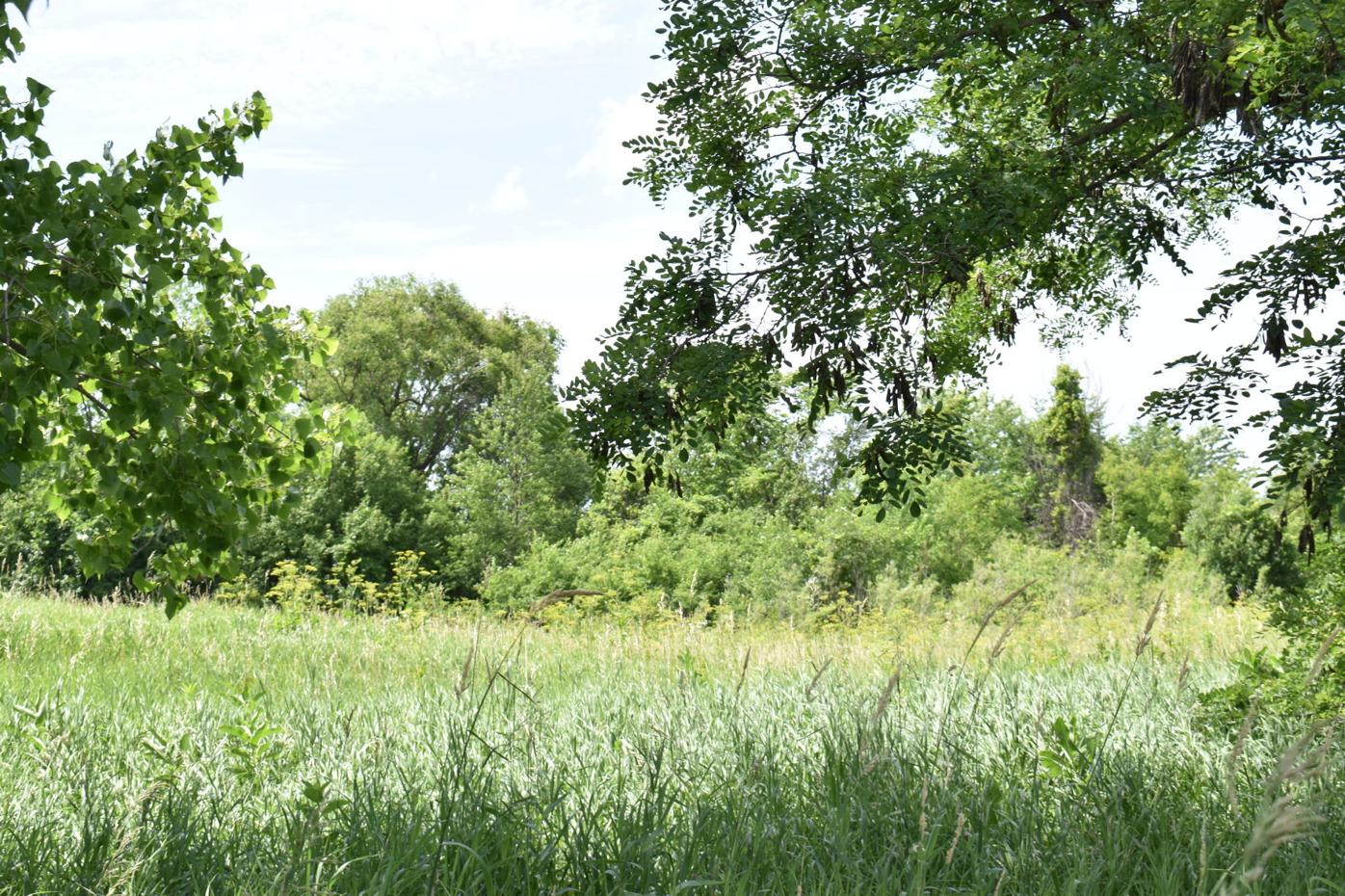 If not treated, wild parsnip can spread rapidly, taking over fields such as this one in Northfield Township. It reduces property values and can cause severe blistering and skinburns if it comes in contact with skin. (Andrew Deziel/Faribault Daily News)

Steve Albers examines a large wild parsnip plant in Northfield Township. The noxious weed can leave awful burns on the skin of anyone who touches the plant. (Andrew Deziel/Faribault Daily News)

By the end of June, wild parsnip begins to flower and the tiny yellow flowers are visible on tall stalks. If not cut, the seeds will mature and fall to the soil, setting the stage for the invasive plant to spread even more in the coming years. (APG Media file photo)

If not treated, wild parsnip can spread rapidly, taking over fields such as this one in Northfield Township. It reduces property values and can cause severe blistering and skinburns if it comes in contact with skin. (Andrew Deziel/Faribault Daily News)

The Minnesota Department of Agriculture has awarded a $50,000 grant to help four area townships eradicate a dangerous invasive species.

The local grant is one of 35 projects statewide, for a total of $537,000 from MDA to be used for equipment and supplies, mapping and outreach activities, and other efforts to reduce noxious weed populations.

Currently, 48 different plant species are defined by the MDA as “noxious weeds.” According to the agency, these plants have the potential to inflict harm on human or animal health, the environment, roads, crops, livestock or property.

The noxious weed which has caused so much trouble locally is known as wild parsnip. John Holden, a former Bridgewater Township supervisor who is helping to lead the Cannon Valley Noxious Weed Collaboration Group, said that it was likely introduced locally by road crews.

Since then, it’s rapidly spread to become a regular presence in local roadside ditches. That’s a serious issue because wild parsnip contains highly toxic oil which can cause severe burn-like effects and even permanent skin damage. Unlike poison ivy, wild parsnip-related inflammation is caused by a chemical reaction, not an allergic one. That means that while many people are immune from poison ivy-related skin damage, no one is immune to wild parsnip.

In recent years, Bridgewater Township residents have found that out the hard way. Holden said that it first came to the township’s attention in 2016, when a resident went to pick wildflowers in a local ditch and came back with severe skin burns. An investigation was launched and quickly determined the culprit. Unfortunately, it also showed that wild parsnip had not only arrived in the region, but was spreading rapidly, and quickly becoming a feature of public and private lands alike.

Under Minnesota state law, local jurisdictions are required to control noxious weeds on public lands. However, getting the state to devote resources to wild parsnip eradication has been a challenge, Holden said, and precious time has been lost.

“None of us addressed it until the last few years and as a result it’s exploded all over,” Holden said. “Now, it’s evident in many, many places.”

Holden said the likely culprit is inexpensive seed mix purchased by MnDOT and county highway departments and laid after the completion of a road project. Once it arrives in an area, it can quickly spread onto public and private lands alike.

In 2017, Bridgewater Township joined with neighboring Northfield Township to begin an annual survey documenting where wild parsnip exists. The following year, they received funding from the MDA for further documentation and eradication efforts.

Holden said that while the townships don’t have the resources to eliminate the noxious weeds entirely, nor the power to remove them from most private property, they have been able to implement efforts carefully targeted at wild parsnip and designed to mitigate its spread.

Each May and June, the townships now mow the right of way to limit the spread of Wild Parsnip. Mowing the right of way later in the year would lead to increased spread, as seeds from the flowering plants stick to lawnmowers and then are deposited elsewhere.

From May thru July, the townships also engage in spraying efforts, carefully targeting wild parsnip and other invasive species while seeking to allow continued growth of desirable vegetation, especially pollinators.

Township residents are allowed to opt out of the program, but have to sign an agreement to eliminate the noxious weeds themselves, so as to prevent further spread. Holden expressed gratitude that many Township residents have put in their own time and labor to help.

At first, the Townships hired a contractor to spray the entire ditch, but that caused significant damage to the native ecosystem. In addition, it had to be undertaken early in the year, to avoid killing soybeans in neighboring fields. This limited its effectiveness, as some of the weeds had not yet begun growing for the season.

Now, local retired farmer Steve Albers spot sprays the ditches instead, targeting the pesky weeds while leaving the other plants alone. Albers said the method is much more effective because he is able to spray later in the season, when the weeds are at their most vulnerable.

Last year, Greenvale and Waterford townships, which sit across the Rice County line from Northfield in Dakota County, joined the collaborative and applied for the joint funding together, with Bridgewater as the grant administrator.

Both Dakota County townships have enthusiastically joined in the effort. Waterford Township Clerk Elizabeth Wheeler said that she works assiduously to identify potential infected properties, and has sent out information about the invasive species to the township mailing list.

Holden expressed optimism that the collaborative approach could be a model for future efforts against noxious weeds within Minnesota. As the jurisdictions share boundaries, he noted that it’s very difficult for any particular one to deal with the issue without cooperation.

To ensure that wild parsnip levels stay as low as possible, Holden said that private property owners may need to make investments to remove wild parsnip from their land. To ensure that happens, the townships plan to continue their education efforts.

“We need to educate our landowners, so that they understand the dangers of it,” Holden said. “It reduces the land values where it exists because it’s so prevalent and dangerous.”

An earlier version of this story gave an incorrect account of when exactly wild parsnips are sprayed in Bridgewater and three other local Townships.

Appearance: Wild parsnip spends one or more years as a clump of low-lying leaves with no vertical stem. The next year, it grows up a flowering stalk, blooms, and then dies. It is 6 inches tall in the rosette stage and 4 feet tall in the flowering stage, with yellow flowers.

Leaves and Stem: Alternate leaves are made up of 5–15 egg-shaped leaflets. Leaflets have variously-sized lobes and coarse teeth along their edges. On flowering stalks, upper leaves are smaller than leaves closer to the base. The stems are stout and hollow, with distinctive grooves.

Seeds: Each plant can produce dozens of small, oval, disc-shaped, slightly ribbed, straw-colored seeds. Seeds remain viable in the soil for up to four years.

Roots: Wild parsnip has a long, thick, taproot that looks and smells similar to cultivated parsnips.