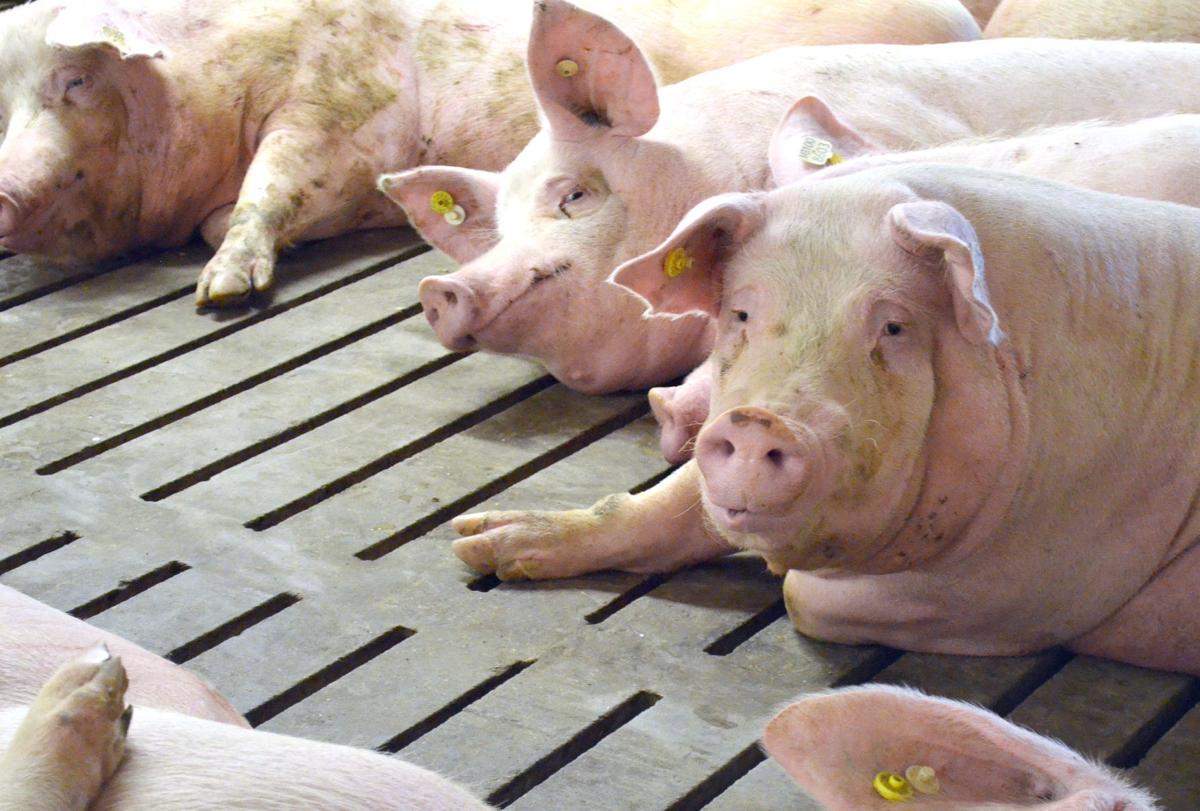 U.S.-raised pork could be in high demand in China after millions of hogs were killed by the African swine fever. In November, it was reported that 130 million of that nation’s pigs were impacted by the virus. That’s about 40 percent of its pig population. (Daily News file photo) 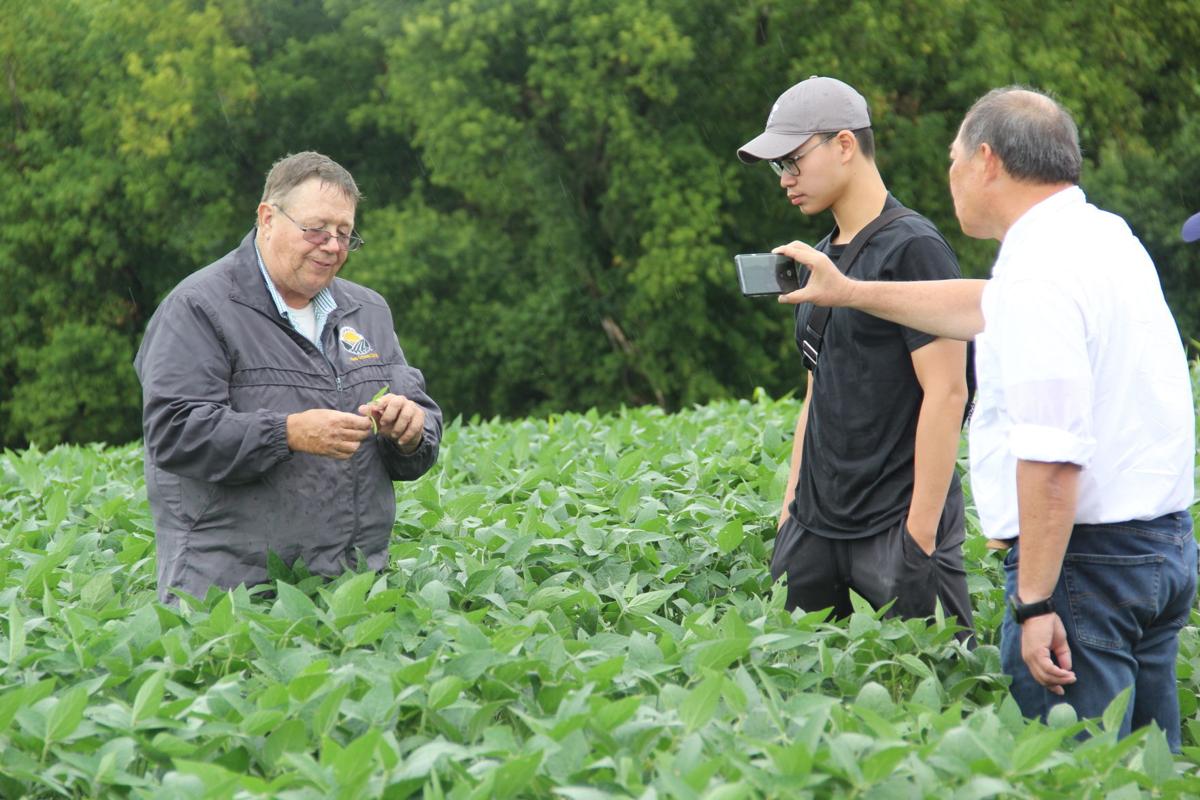 Keith Schrader, left, shows Budi Arinardi and Samudra Arinardi around his Wheeling Township farm in August 2019. Schrader is optimistic that a new trade deals could help area farmers get back on their feet. (File photo courtesy of the Minnesota Soybean Research & Promotion Council)

U.S.-raised pork could be in high demand in China after millions of hogs were killed by the African swine fever. In November, it was reported that 130 million of that nation’s pigs were impacted by the virus. That’s about 40 percent of its pig population. (Daily News file photo)

Keith Schrader, left, shows Budi Arinardi and Samudra Arinardi around his Wheeling Township farm in August 2019. Schrader is optimistic that a new trade deals could help area farmers get back on their feet. (File photo courtesy of the Minnesota Soybean Research & Promotion Council)

Local farmers haven’t had an easy time in the last several years, struggling with inconsistent growing conditions and low commodity prices. However, many, like Wheeling Township farmer Keith Schrader, are expressing optimism that new trade deals could help them get back on their feet.

Last week, President Donald Trump signed the new USMCA agreement between Canada, the U.S. and Mexico into law, fulfilling his campaign promise to seek a substantial renegotiation of the North American Free Trade Agreement. Along with the U.S., Mexico has signed off on the agreement, so it’s set to go into effect pending the approval of Canada’s government. It replaces NAFTA, a controversial 1993 trade deal which critics, including Trump, have accused of costing the U.S. hundreds of thousands of jobs.

Just two weeks prior, Trump struck a “Phase One” trade deal with China. Supporters say it could increase America’s agricultural exports to $50 billion and its overall exports by $200 billion, although the deal only includes fixed targets for this year and next.

The two new agreements are particularly important because China, Canada and Mexico are by far the three largest importers of U.S. goods. In 2017, the U.S. exchanged nearly $1.7 trillion in goods with those three countries.

The agreements follow years of controversial trade policy which saw the U.S. withdraw from the Trans-Pacific Partnership and increase tariffs. Those policies were backed by Director of Trade and Manufacturing Policy Peter Navarro, with the goal of lowering the country’s trade deficit.

Under the new trade agreement, China has agreed to increase its shipments of American agricultural products markedly over the next two years. Schrader said that the bulk of that increase is likely to come from soybeans.

“Still, our markets haven’t reflected it yet,” he said. “That’s because there are a lot of soybeans on the market.”

Schrader added that while soybean farmers are particularly relieved, other producers could see a boost thanks to the trade deal with China. In particular, China will need to import more pork than ever in 2020, with African swine fever having devastated the country’s pigs.

Northfield Township farmer Mike Peterson said he expects that China will need to increase pork exports in the coming months. He noted that the U.S. has more than enough pork to fill China’s needs and the Chinese have had significant ties to the U.S. pork industry. Virginia-based Smithfield Foods, the largest hog producer in the world, has been a wholly owned subsidiary of Chinese conglomerate WH Group since 2013.

Minnesota is the third largest pork producing state after Iowa and North Carolina.

Peterson said that while USMCA may be more of a finished product the phase one trade deal with China it’s a start. More concerning, he’s skeptical that China will truly commit to U.S. agriculture to the extent the deal’s supporters claim.

“The China deal is hard to believe in, and the markets have responded negatively since the announcement,” Peterson said. “Those are pretty lofty goals we’ve set, and I’m not sure what disciplinary aspects there are in the trade agreement to hold China to those numbers.”

Amid potentially tense continuing negotiations with China, it’s likely that ratification of USMCA would also provide extra certainty for soybean farmers. Mexico is the second largest purchaser of U.S. soybeans and produces a large amount of soybean meal.

Supporters of USMCA have also said that it’s likely to open up the dairy industry for U.S. farmers. NAFTA included significant protections for Canadian dairy, although the U.S. still exports around $675 million in dairy annually to Canada.

Lucas Sjostrom, of the Minnesota Milk Producers Association, said that while USMCA is only a modest improvement compared to NAFTA, it’s a big boost to farmers compared to the uncertainty of the last two years.

“Over the last few years, we were taking discounts to our biggest trading partners,” he said. “This should be way better.”

While the Phase One deal with China wasn’t put up to a vote of Congress, USMCA was, and it won overwhelming support after tense negotiations between the White House and House Democrats, who sought stronger labor, consumer and environmental protections.

The final deal was approved overwhelmingly, by a vote of 385-41 in the House and 89-10 in the Senate. Every member of Minnesota’s Congressional delegation voted in favor except for Rep. Ilhan Omar, D-Minneapolis.

Rep. Jim Hagedorn, R-Blue Earth, attended the signing ceremony along with other members from the House Agriculture Committee. In a prepared statement, Hagedorn expressed support for the agreement.

“The USMCA is a well-deserved and much-needed win for our workers, farmers, manufacturers, consumers and families,” he said. “I am looking forward to the benefits it will bring to our 1st District economy.”

“There are worker protections in that trade agreement like no other,” Shields said. “By allowing for oversight of Mexican factories to ensure that they are aligning with labor standards, this agreement marks a big win for working people.”