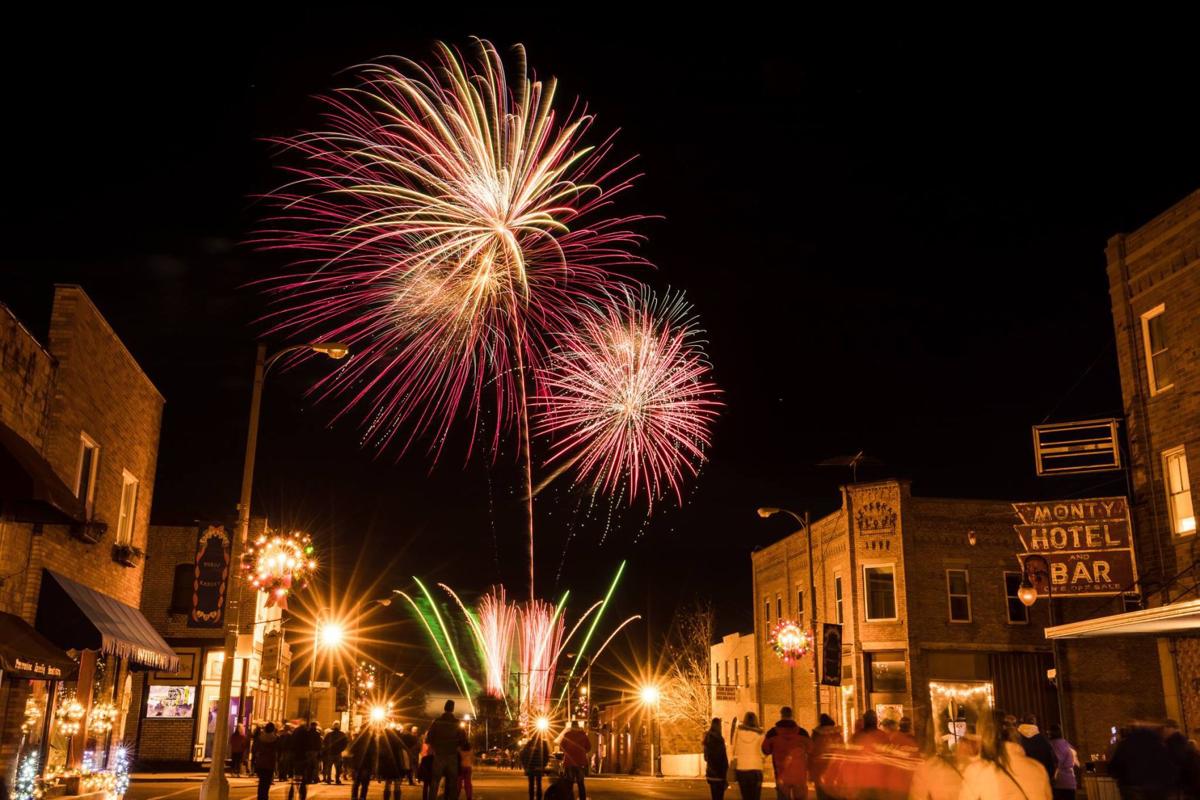 Montgomery’s Torchlight Parade caps off with a firework’s show, which will start at around 7:30 p.m. on Dec. 5. (Photo by Tracy Vanasek) 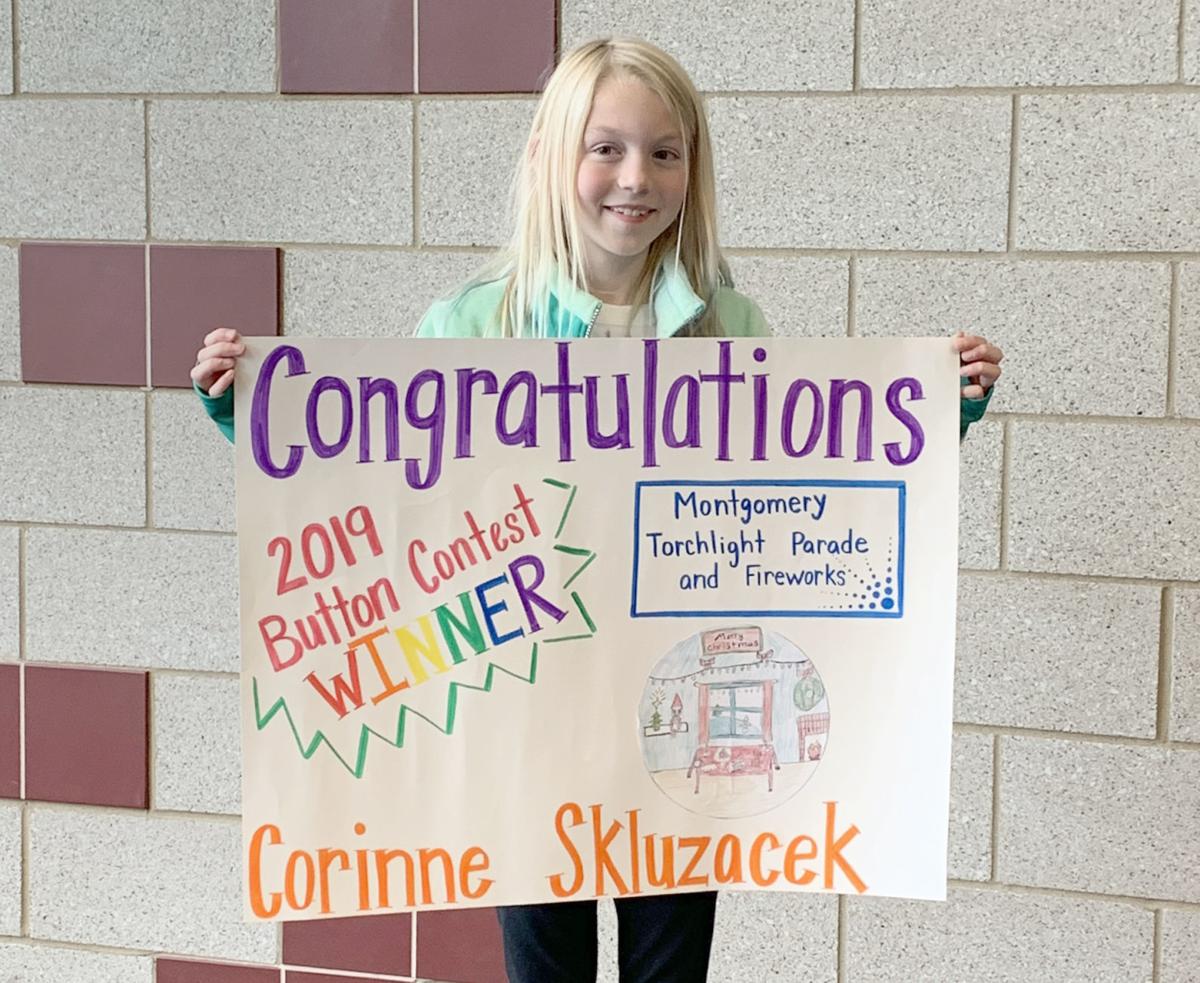 Tri-City United Lonsdale fourth-grader Corinne Skluzacek won the Torchlight Button contest for the parade in Montgomery. Her design will be used for the official 2019 Torchlight button, and she’ll ride on a parade float reflecting her design. (Photo courtesy of Megan Warner)

Montgomery’s Torchlight Parade caps off with a firework’s show, which will start at around 7:30 p.m. on Dec. 5. (Photo by Tracy Vanasek)

Tri-City United Lonsdale fourth-grader Corinne Skluzacek won the Torchlight Button contest for the parade in Montgomery. Her design will be used for the official 2019 Torchlight button, and she’ll ride on a parade float reflecting her design. (Photo courtesy of Megan Warner)

The Thursday after Thanksgiving has special significance in Montgomery. Even though the festivities begin when the sun goes down, what follows is a colorful spectacle that lights up the streets and skies.

The Montgomery Torchlight Parade began 27 years ago, but the committee hasn’t run out of creative new ideas to introduce each year. From 5 to 7 p.m. Thursday a reindeer will join Santa for the first time in a photo opportunity on the corner of Vine Avenue and First Street prior to the main event.

The parade itself begins around 6:30 p.m. on the north end of Main Street, on the corner of Boulevard and First streets, and makes its way south to the Montgomery Public Library. The annual fireworks show will conclude the evening at approximately 7:30 p.m. one block south of the library. Along the route, a number of local businesses and organizations supply refreshments.

The parade includes approximately 50 to 55 units, most radiating colorful lights. Local businesses, organizations, and individuals sign up to participate in the parade and put their own creative spin on the floats they decorate. The Knights of Columbus, a large sponsor of the event, has a place near the front of the lineup as well as the float decorated by the Torchlight Parade Committee.

Jake Keohen, who serves on the committee and also runs the fireworks, said the Torchlight Parade generates a tremendous amount of support with sponsorship donations from the local and extended community. Typically, the committee raises around $16,000 for the event.

“Without that money, wouldn’t be able to have the production we have,” said Keohen. “We do, in the parade, have some paid entertainment, and of course the fireworks a big part of our budget as well.”

Entertainers in this parade include the Schell’s Hobo Quartet, the Govenaires marching band from St. Peter, Lakelander Chorus, the Tri-City United High School Drumline, the Amazing Hoopsters and the Black Diamonds Dance Team.

Each year since the Torchlight Parade Committee formed in 2011, the parade has included two junior grand marshals riding on the lead float. This year’s grand marshals, randomly selected among second-graders in the Montgomery area, are Cameron DeJoy and Vanessa Alaya Sanchez of Tri-City United Montgomery.

The Torchlight Parade Committee also introduced the commemorative button, which developed into a drawing contest for area fourth-graders. This year the committee chose the button design by TCU Lonsdale fourth-grader Corinne Skluzacek to represent the Torchlight Parade. Skluzacek will ride on the lead float, which the committee will design to look like her button, along with the parade grand marshals. The buttons are available at various businesses in downtown Montgomery.

Before the parade officially wraps up, the crowd starts walking to the fireworks field in the same direction as the final floats. With anywhere between 5,000 and 7,000 individuals on Main Street, local law enforcement will be available to help with traffic control.

At the field, Keohen’s fireworks company launches the light show in sync with holiday music. This makes the show more work for the personnel to script, and the set-up requires extra time to put the sound system in place, but Keohen is willing to make the effort.

“We don’t do a lot of musicals for fireworks, so this is kind of a unique show,” said Keohen.

Committee member Anita Rynda said for Montgomery and neighboring areas, the event as a whole signifies the holiday season is underway.

Said Rynda, “If you like lights, a great parade, and fireworks choreographed to holiday music, this is the place to be!”

LIGHT UP THE NIGHT

Santa and his reindeer will be available for photos from 5 to 7 p.m. on the corner of Vine Avenue and First Street.