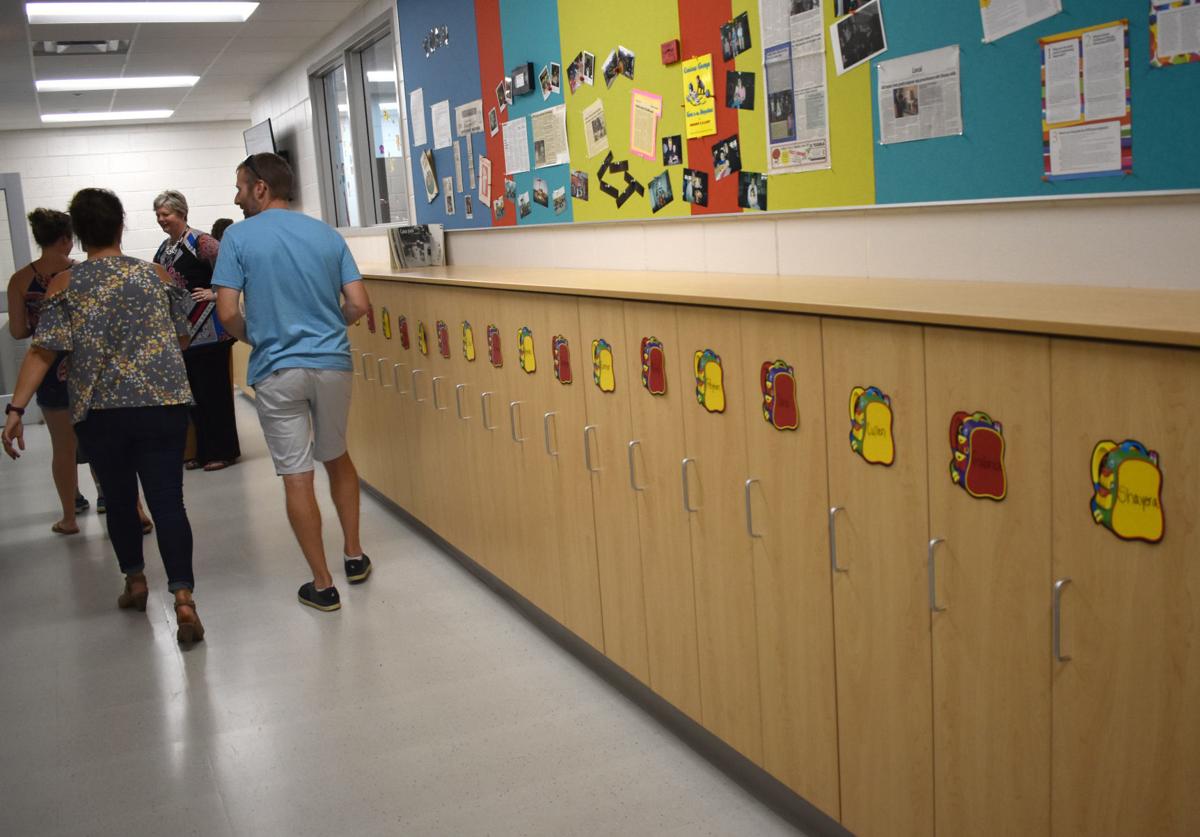 New wooden lockers line the hallway in the TCU Montgomery Early Childhood area, now located at the back of the school. (Misty Schwab/Lonsdale News Review) 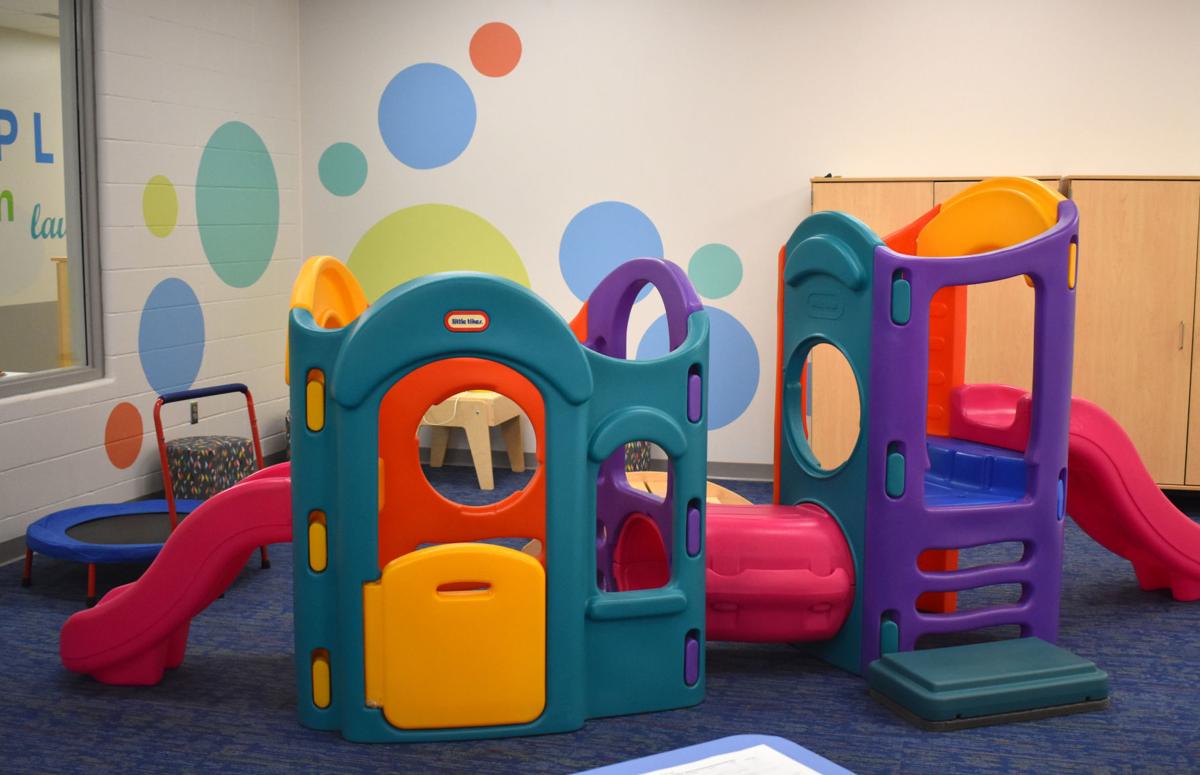 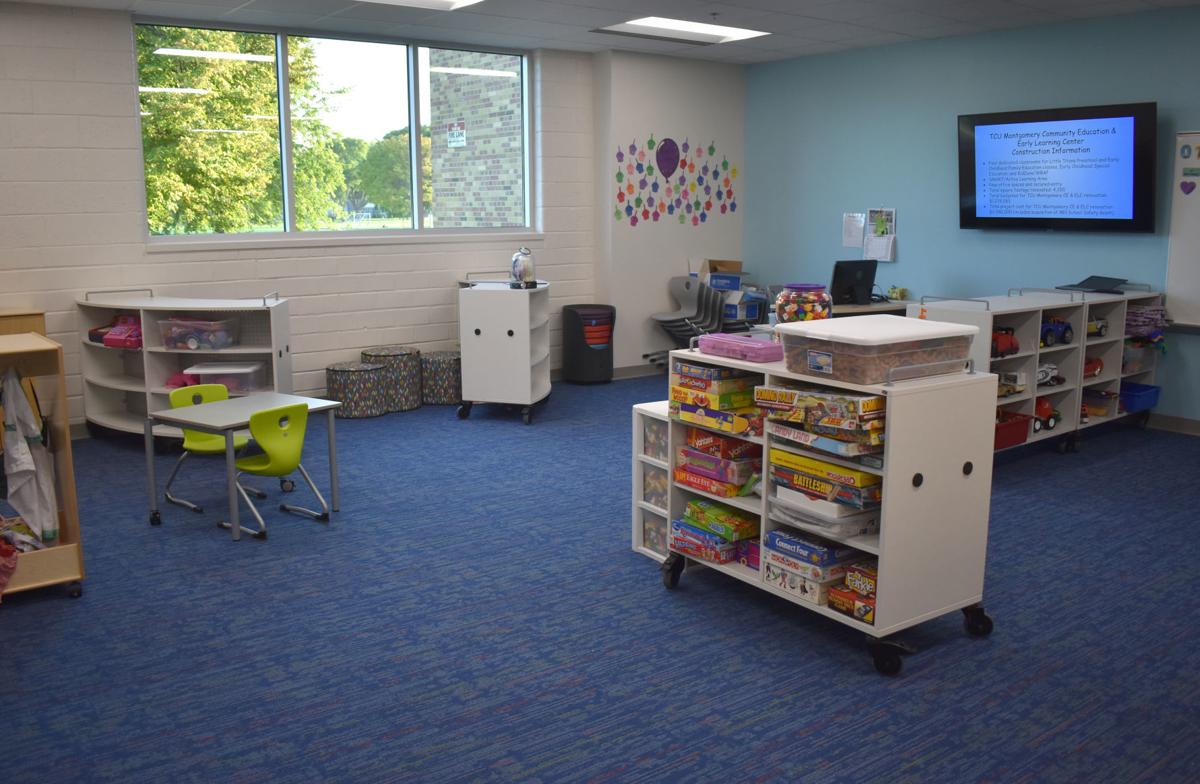 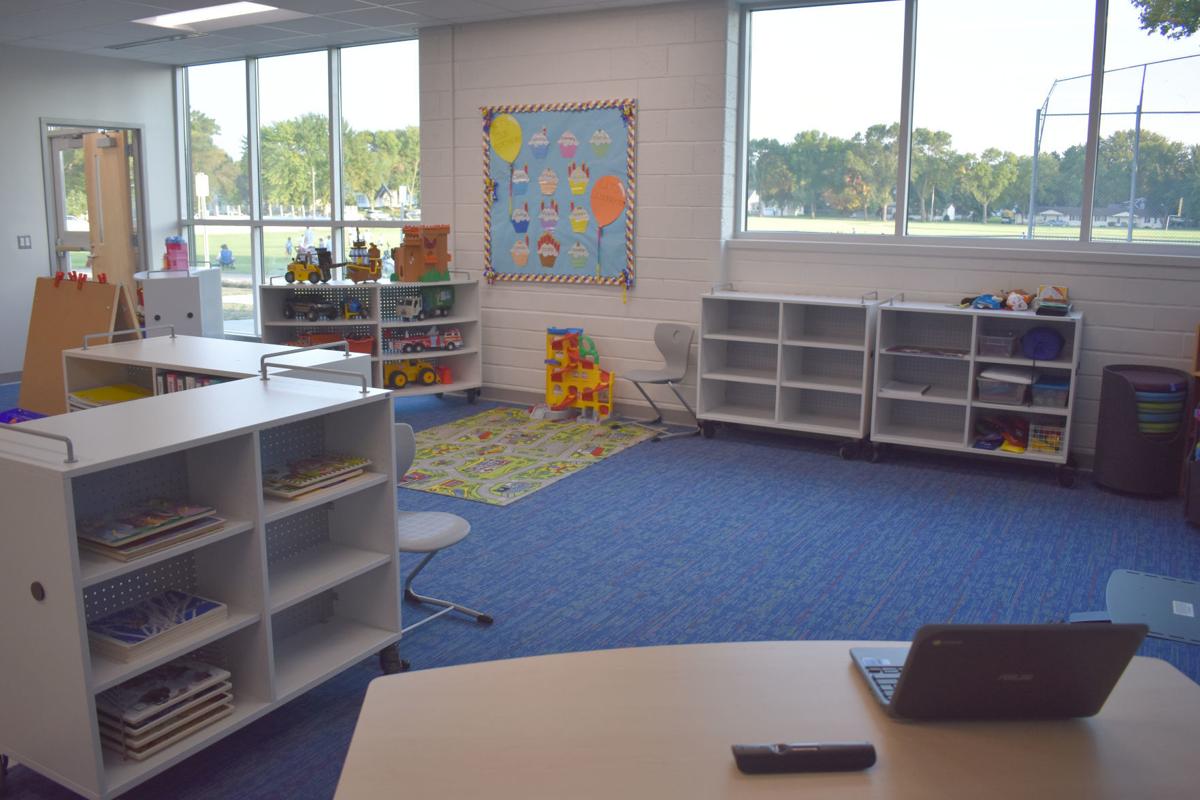 The new preschool classrooms at TCU Montgomery offer a view of the outdoors the east end of the building hasn’t seen in many years. (Misty Schwab/Lonsdale News Review) 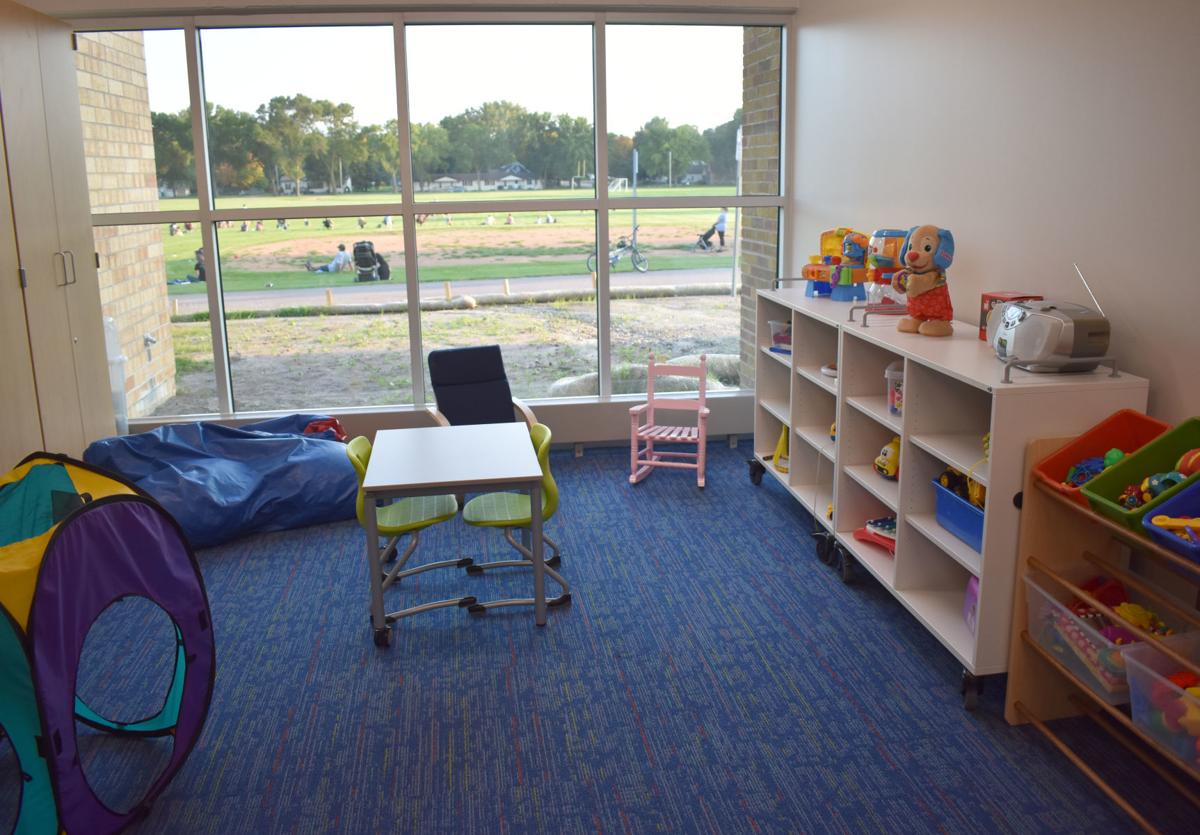 This new space in TCU Montgomery, located next to the preschool rooms, is used for sibling care. (Misty Schwab/Lonsdale News Review) 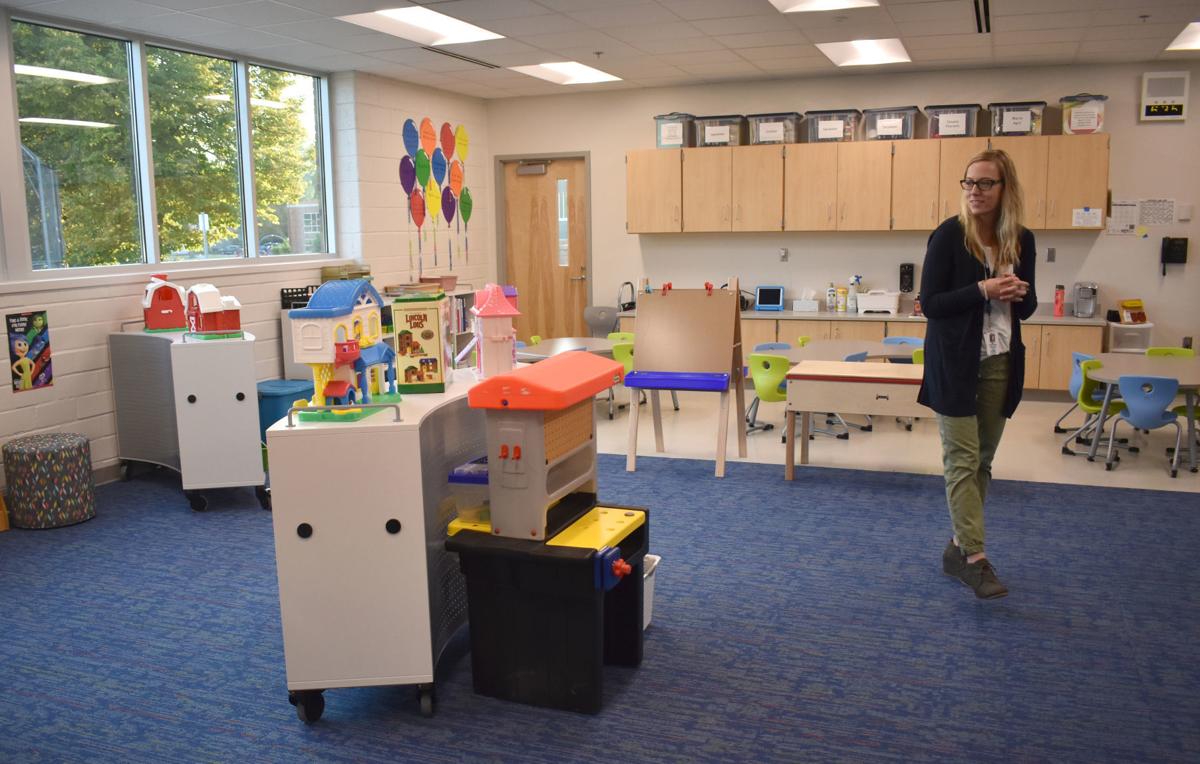 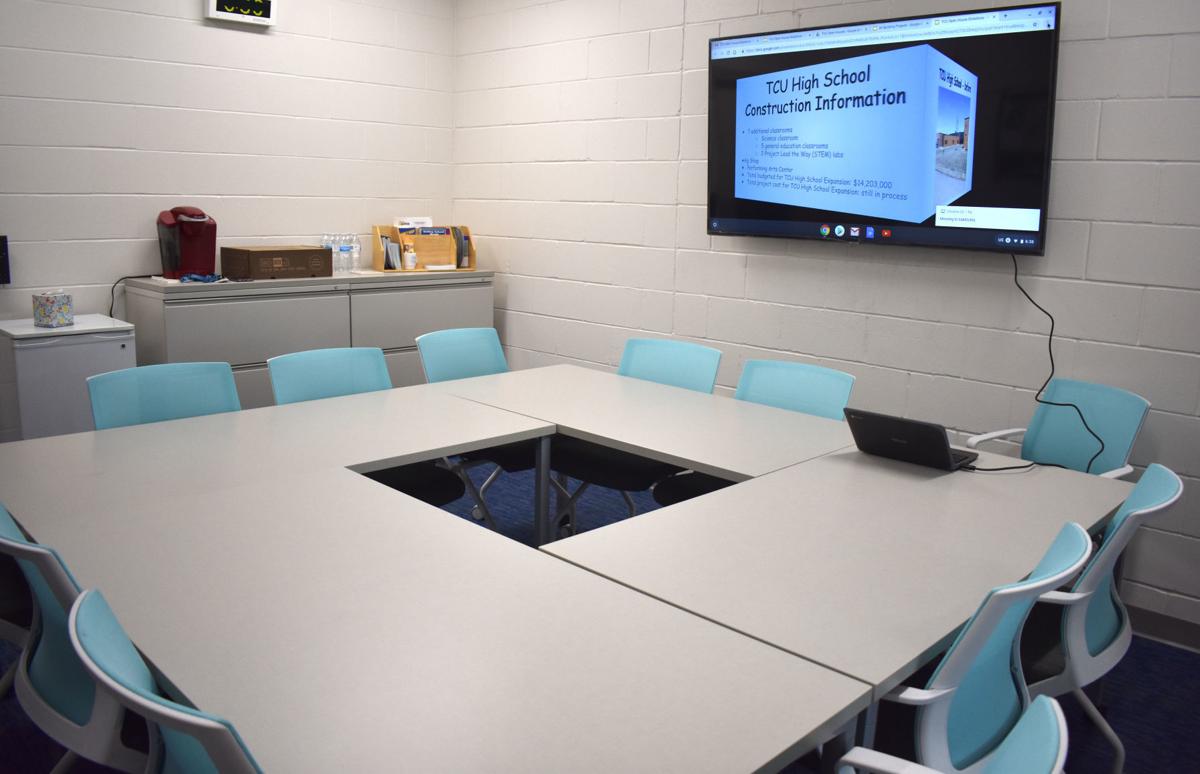 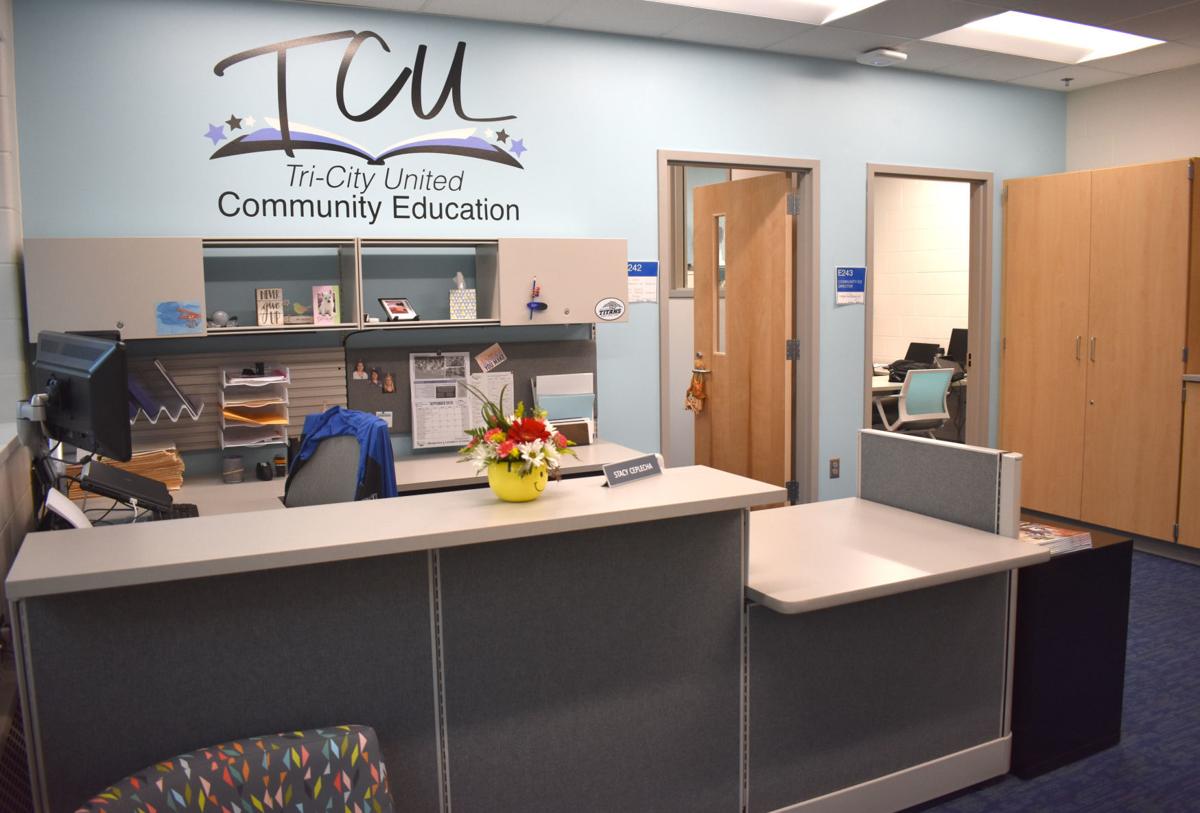 The new TCU Community Education office was the only addition made to TCU Montgomery as part of the bond referendum projects. Now, Admin Assistant Stacy Ceplecha has her own desk while Community Ed Director Layne Wilbright uses the office on the right and Mary Simon, Natalie Eckstein and Jesse Siebsen share the office on the left. (Misty Schwab/Lonsdale News Review)

Anyone who remembers a dark storage space on the east end of Tri-City United Montgomery Elementary and Middle School would see a striking contrast if they stepped inside the back of the building today.

Renovations to this wing, made possible as a result of the February 2018 $22.1 million voter-approved bond referendum, wrapped up before the start of the 2019-20 school year. Early Childhood students have already settled into their new classrooms, but the school opened its doors for a community walking tour Sept. 17.

In the first hour, TCU Montgomery Principal Deb Dwyer said 21 community members participated in the walking tour through the repurposed and enhanced east section of the building.

“They love the colors and the brightness, and they can’t believe what it used to look like compared to what it is now,” said Dwyer.

What was once an abandoned area of the school, containing unused classrooms and the old wrestling room, has been repurposed for Early Childhood as well as Community Education spaces. That means preschool, ECFE and Kidzone now have their own separate rooms and Community Education staff work in the same office area. The space also includes a conference room, an active learning area, a sibling care space and an Early Childhood special education classroom.

Layne Wilbright, TCU Community Education director, said the Community Ed office is the only new addition to the otherwise repurposed space. Previously, two Community Ed staff members shared a small room in the elementary office while other staff members were stationed in other school areas. Wilbright said the change allows the department to function more efficiently and improve communication.

The newly renovated space not only improves workflow for employees but also reduces traffic throughout the school since Early Childhood has its own designated space. An entrance at the back of the building for Early Childhood families especially alleviates traffic from the main entrance. And like TCU Lonsdale, this entrance is now safe and secure in that it requires visitors to buzz in before entering.

The four repurposed classrooms on the east end have allowed the school to expand its options for preschool programming. Before the completion of the building project, it only offered preschool in one classroom and only two-day and three-day options. Now, TCU Montgomery offers half-day preschool five days a week in the mornings and afternoons for children 4 and up. Wrap is another new option, which allows children 3½ and up to attend preschool in the morning and Kidzone, or childcare, in the afternoon.

Jesse Seibsen, KidZone and wrap coordinator, appreciates the changes because now KidZone, ECFE and preschool all operate in their own spaces. This wasn’t the case before, when all three programs utilized the same room and therefore couldn’t run at the same time. Now, the four new classrooms make it possible for all three offerings to happen simultaneously and the former preschool/ECFE/KidZone room is a designated sensory space.

Within each classroom, a district team selected new shelving, storage spaces and furniture. Since fabrics and furniture have similar designs and patterns across the district, they can be transferred to different buildings whenever there’s a need.

Jean Kopp, TCU director of business, was a part of the team that selected the furniture. And as the mother of a 5-year-old not quite ready for kindergarten, she’s pleased that she can now send her son to five-day a week preschool to keep him progressing in the right direction.

“We used to come to ECFE here, but it’s so exciting to have the designated space,” said Kopp. “It’s nice to take one child to sibling care and nice to have an even more improved atmosphere.”

Offering a perspective as a TCU Montgomery alumna, Kopp added: “[From] what this space was when I was in school, it’s so different it’s hard to believe.”