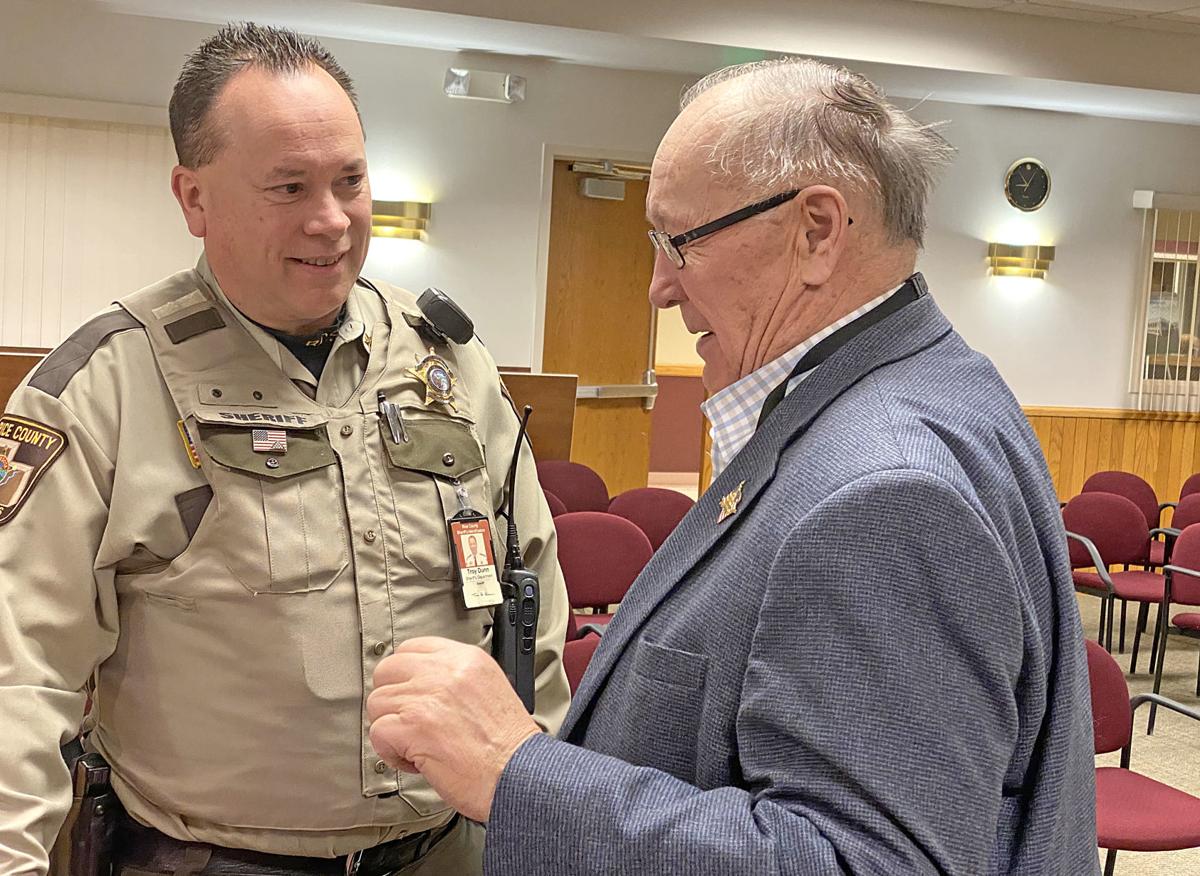 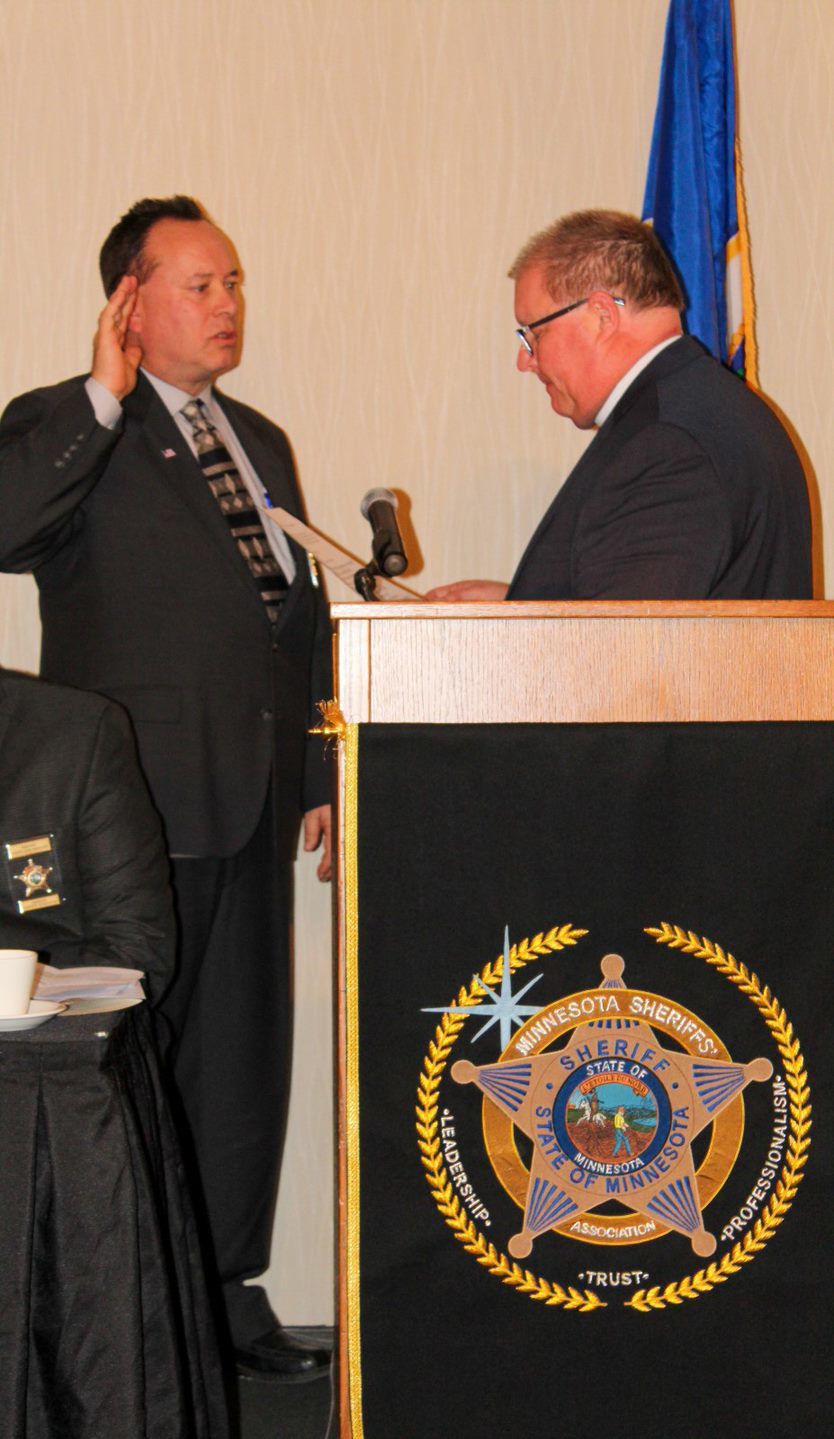 Rice County Sheriff Troy Dunn was sworn in as President of the Minnesota Sheriff’s Association at a December 2019 conference in Alexandria. (Photo submitted)

Rice County Sheriff Troy Dunn was sworn in as President of the Minnesota Sheriff’s Association at a December 2019 conference in Alexandria. (Photo submitted)

After a five year tenure on the Minnesota Sheriffs’ Association Board of Directors, Rice County Sheriff Troy Dunn is taking on a new role as the board’s president.

Dunn was sworn in for a one-year term at the organization’s December conference in Alexandria. Born and raised in Rice County, Dunn started his career with the Crow Wing County Sheriff’s Department before joining the Kenyon Police Department. Recently, Dunn celebrated three decades of service to the Rice County Sheriff’s Department. in 2018, he was elected without opposition to his third term as sheriff, which he says will be his last.

Dunn is replacing Rock County Sheriff Evan Verbrugge as the board chair. In his role as MSA president, Dunn will preside over board meetings and help promote the interests of sheriffs departments throughout the state.

Verbrugge offered words of praise for Dunn, saying that he expects Rice County’s top lawman to make an outstanding leader for the organization, which includes sheriffs from all 87 of Minnesota’s counties.

“At our meetings, Sheriff Dunn always brings up ideas on how to better the sheriffs association and the community as well,” he said. “I think we are in very good hands with Sheriff Dunn as the president of the Sheriff’s Association.”

Retired Washington County Sheriff Bill Hutton will serve alongside Dunn as the MSA’s executive director. Hutton agreed that Dunn has been an active member of the board, leading the way on several important initiatives. Hutton noted that in addition to lobbying legislators and training deputies, the Sheriff’s Association also works to promote the work done by sheriff’s offices across the state through its social media accounts, which have a wide reach.

As president, Dunn expects to continue to work on several issues he’s helped to lead the way on as a member of the organization’s board. Crucially, the Sheriff’s Association helps to organize training opportunities for law enforcement.

Over the last several years, the Sheriff’s Association has worked to expand those training opportunities for sheriffs’ departments and their partners such as EMS and local police, through both online and in-person training sessions.

Here in Rice County, more than two dozen law enforcement officers and first responders, including several from the Sheriff’s Department, attended a training session last fall designed to help defuse tense situations. The training took place after law enforcement officers fought for and secured a law state requiring peace officers to complete at least 16 hours of de-escalation training. Yet many face tense situations on a daily basis, and want an even more comprehensive approach.

Dunn said he’s hopeful that the federal government, which funded Rice County’s de-escalation training, could play a significant role in helping local sheriffs’ departments. Alongside sheriffs from across the nation, he’ll travel to Washington, D.C., next month to lobby for more legislation.

He says that the MSA will work closely with the state Legislature to achieve its aims. A major priority will be to preserve Minnesota’s Civil Forfeiture legislation. Civil forfeiture has become increasingly controversial in recent years, with some viewing it as a violation of due process.

Last session, a bipartisan group of legislators proposed replacing civil forfeiture with criminal forfeiture and only allowing seizure after a conviction has been reached. Civil liberties groups backed the legislation but law enforcement groups were critical.

Finally, the Sheriff’s Association will have plenty to say about the proposed legalization of marijuana. Last year, Gov. Tim Walz ordered Minnesota state agencies to prepare the state for potential marijuana legalization.

Along with other law enforcement groups, the Sheriff’s Association has been highly critical of the marijuana legalization push. A bill to legalize pot could pass the House but is likely to die in the Senate, where the Judiciary and Public Safety Committee rejected legalization in 2018.

For his part, Dunn says he’s honored to have been nominated and chosen by his peers to serve in the high-profile role and can’t wait to get started.

“I look forward to working with my fellow sheriffs, our public safety partners and the county attorneys offices to provide great training for law enforcement, and work with legislators and senators to come up with appropriate laws,” he said.