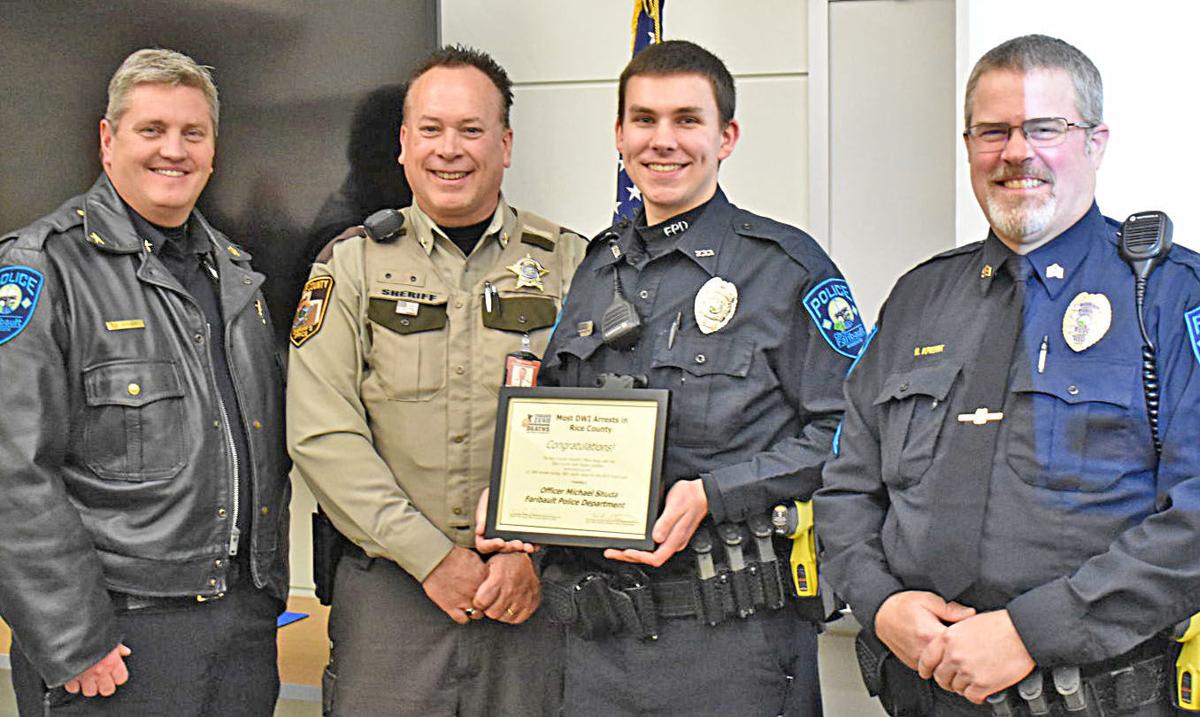 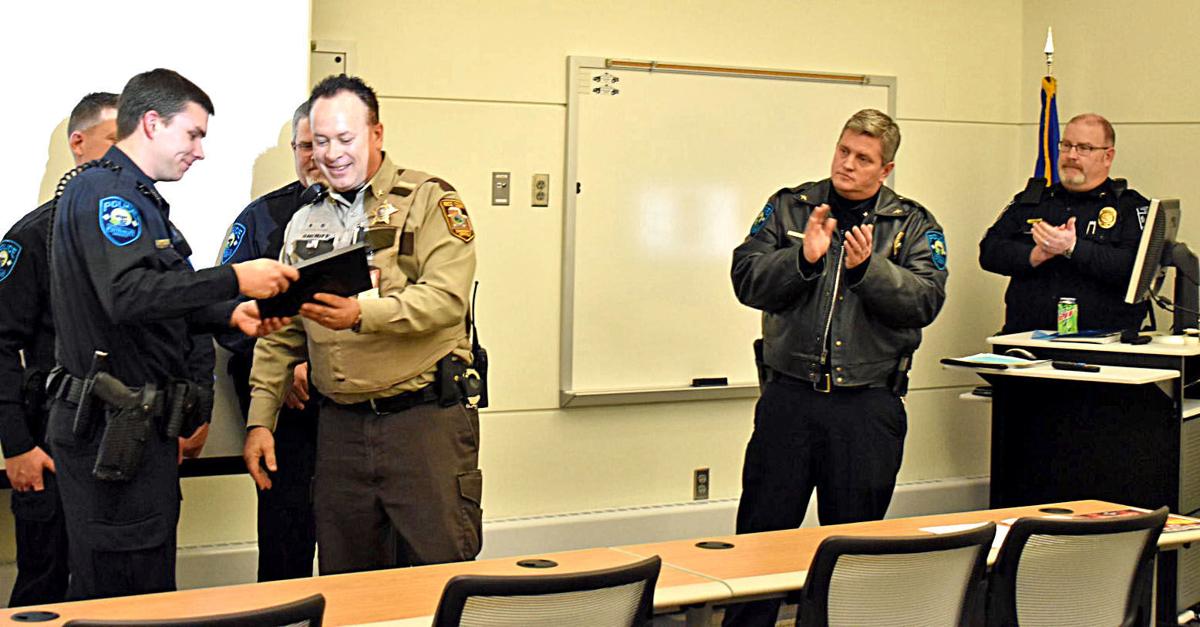 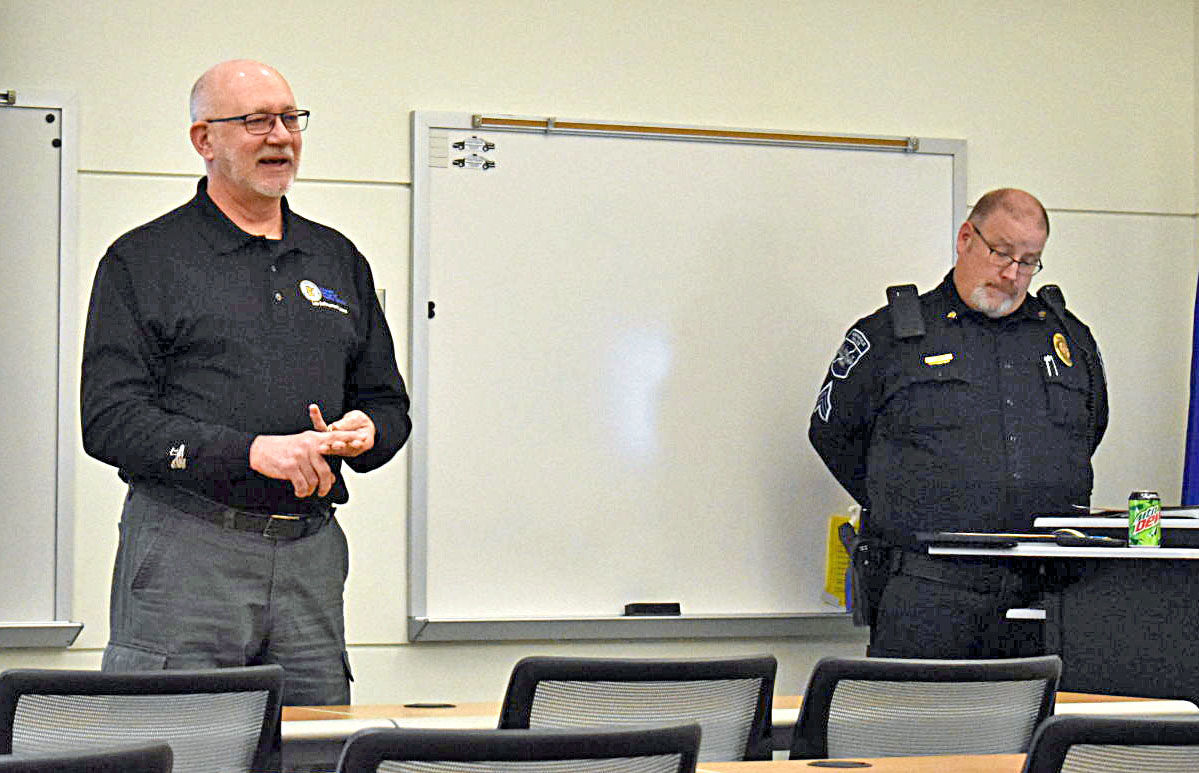 In preparation for the holiday season, Rice County’s law enforcement agencies came together on Wednesday evening for a special joint kickoff of this year’s Toward Zero Deaths campaign.

The Towards Zero Deaths campaign combines education and awareness efforts with extra enforcement on the road during specific times. Over the next month, police are adding extra shifts, particularly on Friday and Saturday nights.

Police also honored Faribault Police Officer Michael Shuda for leading the way in getting drunk drivers off the roads in Rice County. Over the course of more than 700 traffic stops, Shuda arrested 21 intoxicated drivers.

“Michael makes a difference all the time on the road,” said Faribault Police Chief Andy Bohlen. “We’re very proud of his efforts on DWI enforcement.”

Out of Minnesota’s 87 counties, Rice County ranked 13th last year for suspected drunk driving-related deaths and serious injuries. 33 such deaths and injuries were reported, the same as in northern Minnesota’s Cass County.

Because the list doesn’t account for population differences, high population counties like Olmsted, St. Louis and Ramsey finished higher than Rice County, with Hennepin County easily taking the top spot at nearly 200 such deaths and injuries. The county jumped up one spot compared to 2017, trading places with Scott County, which enabled it to access extra funding for enforcement and education efforts. Rice County’s ranking at 13th matches with its position as the 13th most populous county in the state, per the 2010 census.

Faribault Police Sgt. Mark Krenik noted that the holidays are a particularly dangerous time on the roads, as winter weather combines with a large number of drunk drivers. Out of the major holidays, Thanksgiving Day ranks as the fourth most for DWIs.

Surprisingly, the Department of Public Safety’s statistics put Thanksgiving ahead of New Year’s Eve and Christmas for volume of DWIs. Only the Fourth of July, Labor Day and Memorial Day tend to see more DWIs than turkey day.

McConkey noted that over the last several decades the Towards Zero Deaths campaign’s comprehensive approach has made major headway, according to the Department of Public Safety’s statistics.

Compared to two or three decades ago, the number of suspected drunk driving deaths and injuries has decreased by roughly two thirds. Still, McConkey said that far too many people are still driving drunk — and extra enforcement provides a critically important deterrent.

“It still amazes me how easy it is to find drunk drivers on the roads,” he said. “We’ve tried the education, the awareness … but if there isn’t accountability, nothing is going to happen.”

In Rice County, the number of drunken-driving related deaths may be decreasing, along with the number of speed-related crashes. However, Northfield Police Sgt. Kevin Tussing said that other trends are more concerning.

In hopes of reducing crashes, public safety groups pushed hard to make Minnesota one of an increasing number of states with a “hands free” driving law. The bill was approved by Minnesota’s legislature and Gov. Tim Walz and went into effect Aug. 1.

In September and October alone, more than 5,000 Minnesotans were ticketed under the new statute. It’s built on the success of the state’s texting while driving law, which has seen increased citations every year since it was first implemented in 2010.

A more complex issue for police is the issue of controlled-substance related DWIs. A report last year from the Governor’s Highway Safety Administration found that more fatally injured drivers tested positive for drugs than for alcohol.

“(Drugged driving) is not as easy to detect,” Tussing said. “Officers need to be specifically trained in recognizing it.”