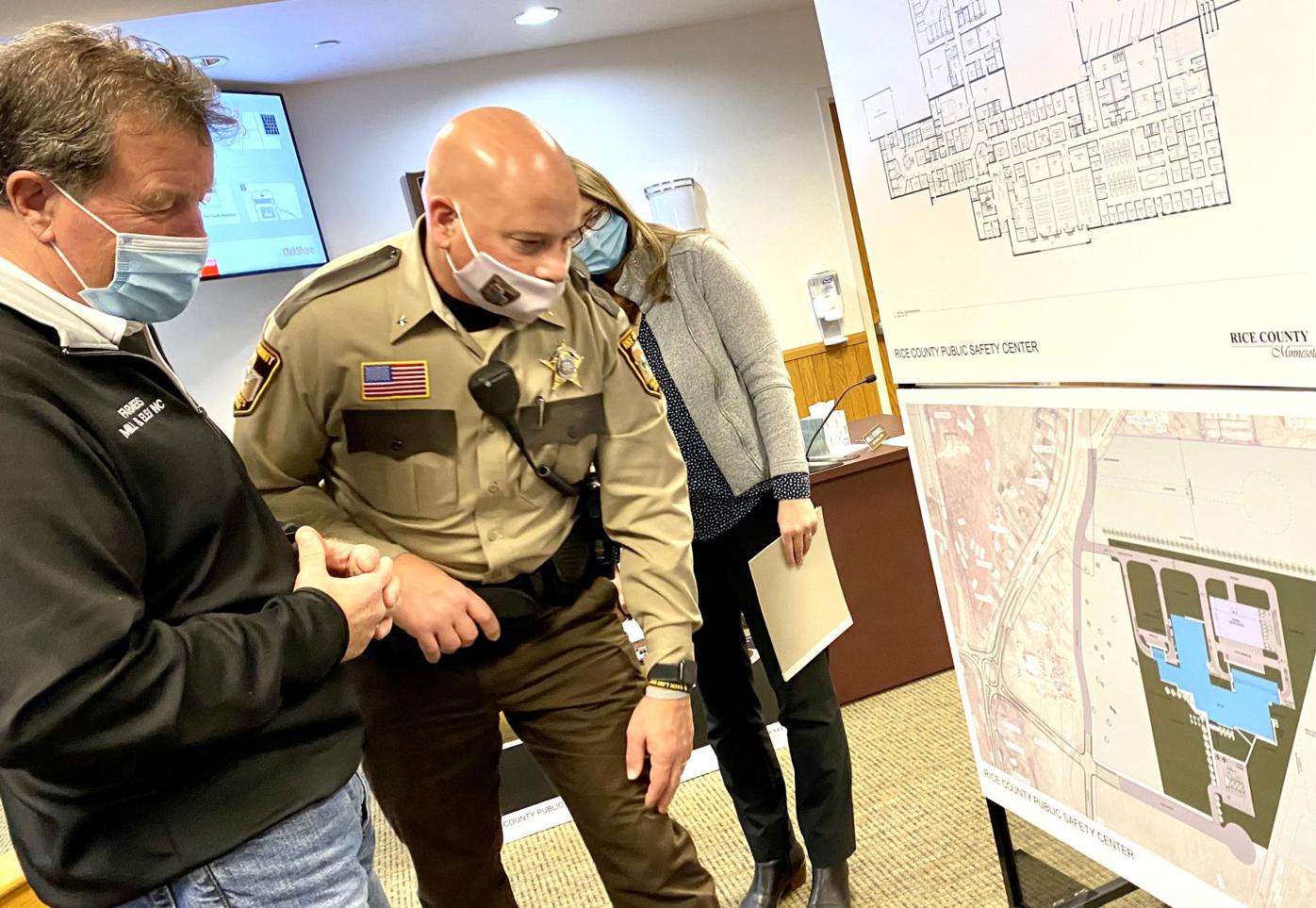 Commissioner Jim Purfeerst, left, discusses a preliminary rendering of the new Rice County law enforcement center with Rice County Sheriff Jesse Thomas. The center is set to be built on a portion of land the county purchased on the west side of the intersection of Hwy. 3 and 30th Street in Faribault. (Suzanne Rook/southernminn.com) 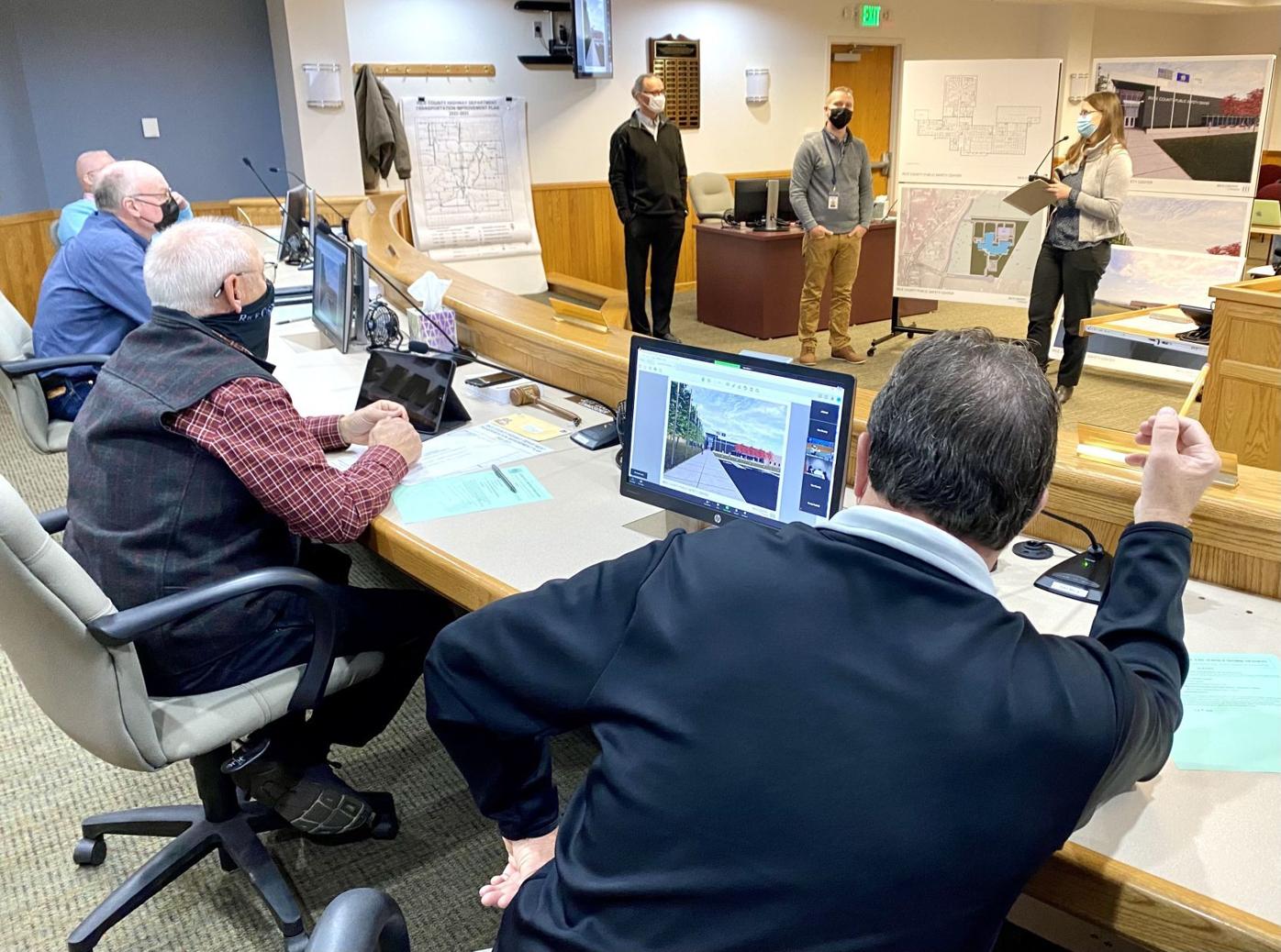 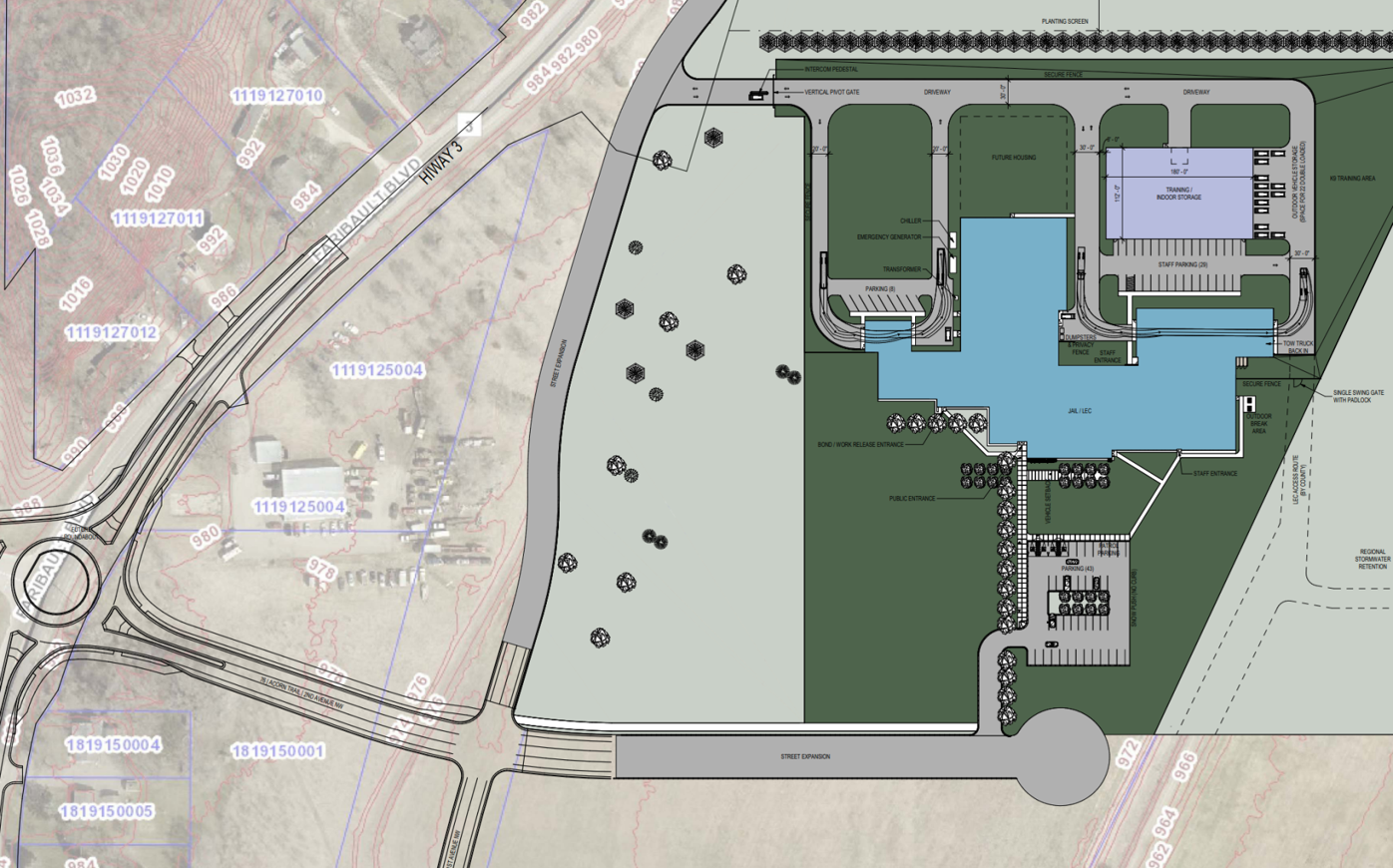 This rendering shows the planned Rice County law enforcement center east of Hwy. 3 near a roundabout to be built in 2022 at its intersection with 30th Street. (Image courtesy of Rice County) Commissioner Jim Purfeerst, left, discusses a preliminary rendering of the new Rice County law enforcement center with Rice County Sheriff Jesse Thomas. The center is set to be built on a portion of land the county purchased on the west side of the intersection of Hwy. 3 and 30th Street in Faribault. (Suzanne Rook/southernminn.com)

This rendering shows the planned Rice County law enforcement center east of Hwy. 3 near a roundabout to be built in 2022 at its intersection with 30th Street. (Image courtesy of Rice County)

Matthew Verdick is well aware of the supply shortages that are impacting the construction industry.

That’s why the Rice County parks and facilities director plans to ensure certain building materials that are currently hard to come and that will be used on the county’s new law enforcement center are ordered ASAP. Verdick, who’s helping oversee the project, set to break ground sometime next year, said Tuesday that steel and precast concrete panels, which will likely be used in the new facility, will get moved to the top of the list when it comes time to order supplies.

Currently, delivery of steel for construction is taking 50-60 weeks. Those sorts of timelines not only means delays in construction, but could very well mean added costs.

Verdick, on Tuesday, said the Board of Commissioners’ decision to hire a construction manager for the project will help accelerate the ordering process for certain materials that are now in short supply. Instead of going out for bid in a single package, a construction manager can have bids awarded piecemeal, he said.

It’ll be a few weeks before the board approves a final design for the law enforcement center, which will include a $49.2 million, 76-bed jail and Sheriff’s offices. A preliminary schematic and renderings of the exterior shown to the board Tuesday drew a few questions, most about costs and exterior materials.

Commissioner Jim Purfeerst wondered about maximizing jail space for the inmate population which can fluctuate over time. Not only do inmates need to be separated by gender, those with special needs and requiring more intense supervision also need to be segregated others.

The jail space is flexible, said Danielle Reid, with Klein McCarthy Architects, and can be easily adjustable according to the inmate demographics.

Discussions about preferences of the exterior finishes were more subjective, with architects showing the board a front facade covered with Kasota stone, clear glass and brick, and one with brick — possibly a dark, almost black brick — and precast concrete panels. In either instance, the remainder of the building will likely be made of precast panels.

But while using precast panels has traditionally been a cost-saving measure, Verdick says that more recently brick has been cheaper. For now, he said, the architects and county-appointed task force will consider different options and bring them to the board for a final decision early next year.

The law enforcement center, which was approved by the board in May, will replace the existing Sheriff’s offices and main jail downtown, along with the jail annex on Hwy. 60 just east of the interstate. The board hasn’t yet determined what will happen with those buildings once they’re vacated, though the annex could return to the federal government, which owned the building previously. An agreement to purchase the annex included a stipulation that it needed to be used for law enforcement purposes.

The new jail was approved after the state Department of Corrections threatened to limit the number of days inmates could be held in the main jail, which houses medium and maximum security inmates, because it didn’t have the required amount of space for recreation and programming. Those limits would put a significant squeeze on the Sheriff’s budget, former Sheriff Troy Dunn told the board, and increase the time deputies need to spend transporting inmates to and from jails in nearby counties as well as keep they tied up and away from the other obligations with the county.