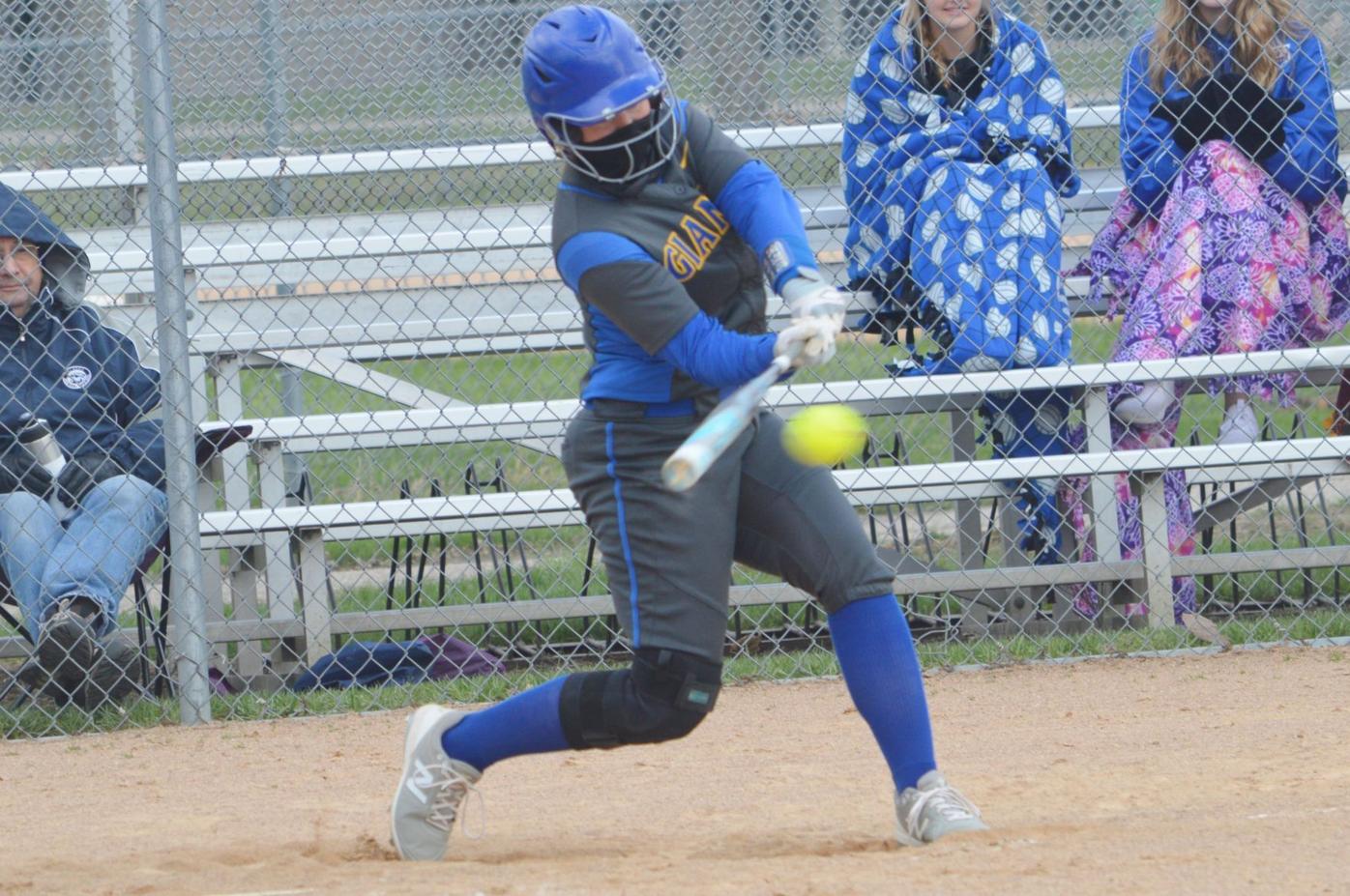 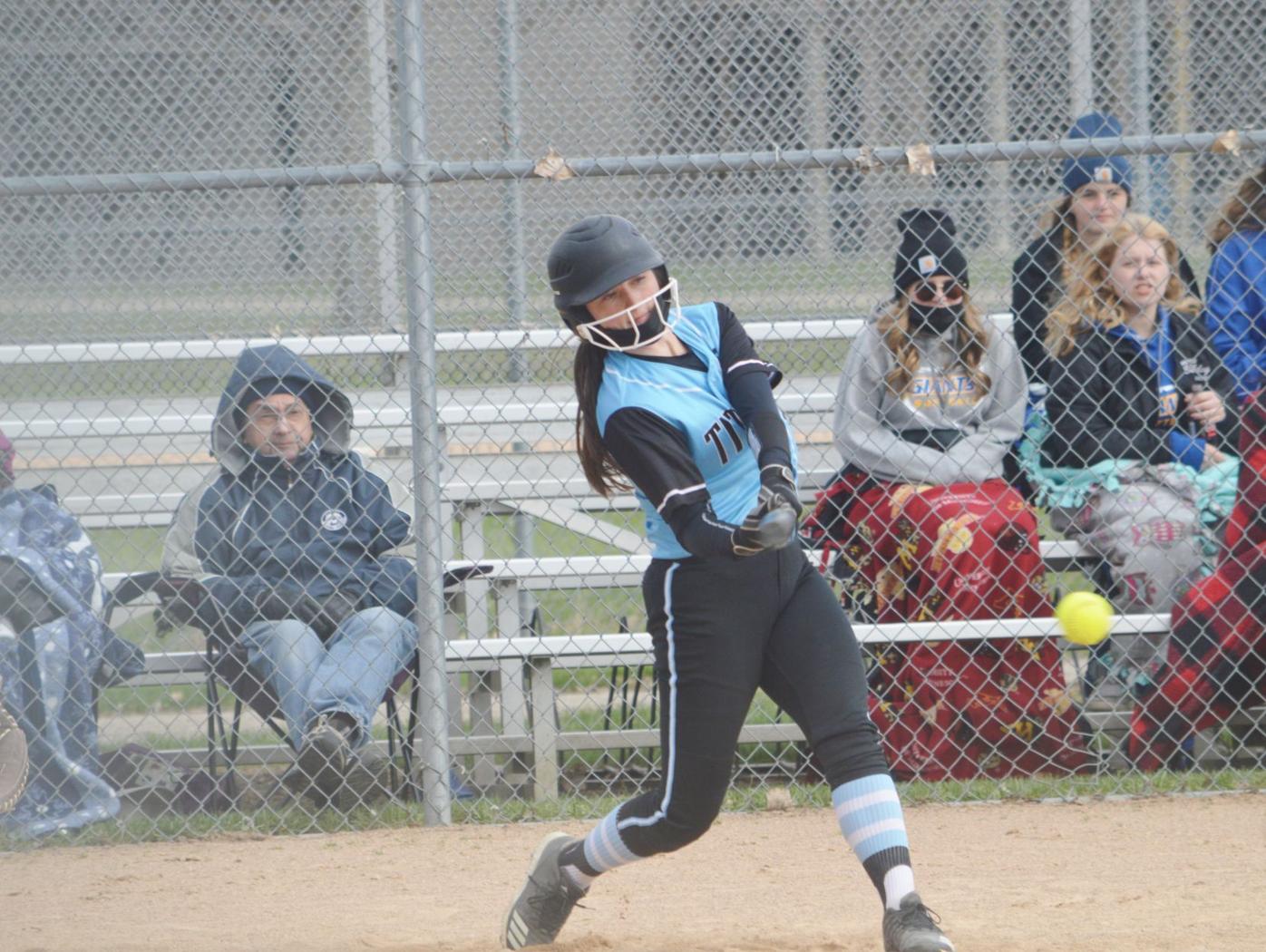 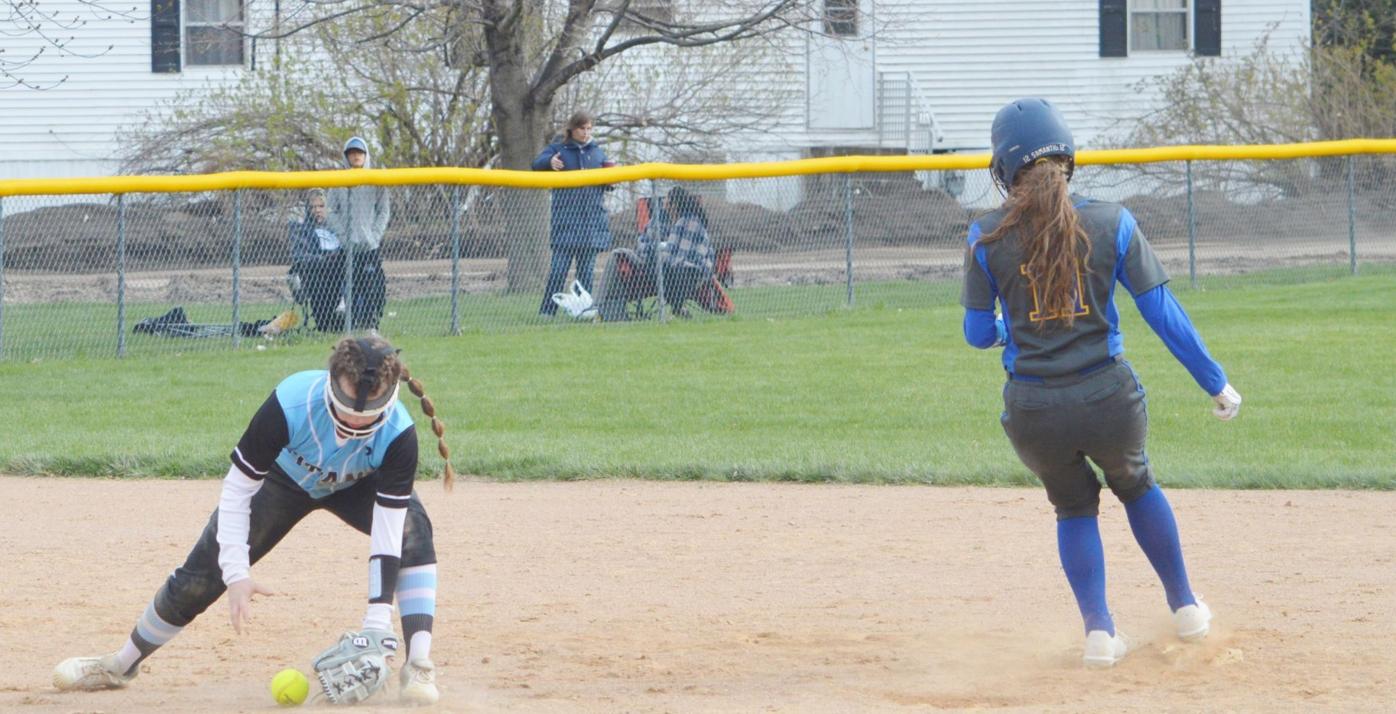 The Le Sueur-Henderson softball team earned back-to-back wins on Monday in their first home games of the season. In a doubleheader against Tri-City United, the Giants won the first game 11-1 and earned a larger 14-1 victory in the second.

“It’s always fun to win that first game at home,” said Coach Anne Lewis. “Rhyan [Fritz] did an excellent job as pitcher. She threw nine strikeouts. Our batters, we had everyone 1-9 get a hit.”

The Titans put the first run on the board. Brooke Blaschko led off with a walk to first and stole second An error by the shortstop allowed Blaschko to advance to third, giving Elliana Novak the opportunity to drive her home with a single.

But that was the last time the Giants would allow the Titans to score. In the bottom of the first, the Giants racked up three runs. Halle Bemmels took first, hitting a hard ground ball, and then stole second. She advanced to third as Chloe Brandt took first on an error and was batted in by a fly out to center field by Zoe Thomson. Brandt was on third when Sam Wilbright hit a single and batted her in. Rhyan Fritz, who walked, claimed the Giants’ third run on an RBI single by Sam Milam.

The Giants took out the Titans quickly in the top of the second, before adding four more runs to their score. The Titans were plagued by errors and gave up too many opportunities to LS-H.

Bemmels earned her second run, batting a single, advancing to second off a single by Brandt, and running all the way home on an error. Brandt was quickly batted in by Rhyan Fritz, who later scored off a ground ball by Olivia Fritz. Olivia Fritz scored the Giants’ seventh run off a single by Sam Wilbright.

The Giants shutout the Titans again in the third and took advantage of errors to put another run on the board. In the bottom third, Madi Wilbright reached first off an error, advanced to second on a passed ball and was finally batted in by Bemmels.

Sam Wilbright earned the ninth run in the fifth, hitting a single and stealing second before scoring on a single by Makenna Borchardt.

The Giants topped off the first game with two final runs in the fifth. The bases were loaded with Bemmels on third, Rhyan Fritz on second and Zoe Thomson on first. Olivia Fritz collected two RBIs, batting in Bemmels and Fritz with a single to earn LS-H an 11-1 victory.

The Giants finished the first game with 12 hits, 11 runs and nine RBIs. Halle Bemmels and Rhyan Fritz were the top scorers with three runs each. Bemmels and Sam Wilbright batted 3-for-3.

Rhyan Fritz’s performance on pitch was a steep challenge to the Titans. Over all five innings she threw 70 pitches, 46 strikes and nine strikeouts.

Brooke Blascko led the Titans in scoring with one run. Elliana Novak collected one RBI and one hit while Rachel Rynda collected a hit as well. On pitching, Novak threw for five innings with 100 pitches, 60 strikes and two strikeouts.

“We knew coming into the games tonight that Le Sueur was going to be a tough competitor,” said TCU Coach Kelly Jo Closser. “The girls came in pumped up. No. 1 batter, Brooke Blaschko drew a walk in the first at bat at the game, really getting the bench going. Our No. 3 hitter, Ellaina Novak came up and got a hit scoring her and the girls really got excited scoring first.”

“We had a lot more errors in the field tonight than we would have expected, which seemed hard to overcome for the girls so far,” Closser added. “We will need to be mentally stronger going forward, which we will be spending more time on in the upcoming days.”

In the second game, the Titans changed their lineup, allowing Alexis Hoefs to take over for pitching. But defensive errors remained an issue and allowed the Giants to win another dominant performance.

LS-H racked up a whopping seven runs at the top of the first. Bemmels led with a single and was batted in by Brandt. Brandt then stole second and was batted in by Rhyan Fritz. Thomson batted Fritz in with a fly ball to center field and Thomson then took second off of an error. Sam Wilbright hit the Giants’ first double and batted in Thomson. Sam Milam followed, taking first on an error. Makenna Borchardt then batted in Wilbright on a single and Milam took home off a ground out. A single by Bemmels batted Borchardt into home, giving the Giants seven total runs.

Brandt took over for pitching and proved to be just as effective. In three strikeouts, the Titans went scoreless in the first.

The Titans struck back in the second, shutting out the Giants with a line out, tag on third and a pop out. But the Titans couldn’t muster a hit between a pop out and two consecutive strikeouts.

Errors gave the Giants five more runs in the top of the third. Borchardt walked to first while Taylor Hartmann followed off a ground ball error. Borchardt took home off an error as Bemmels reached first and a single by Brandt batted in Hartmann. Fritz batted in Bemmels with a double and Brandt took home off a passed ball. Thomson hit a double to bat in Fritz, putting the Giants at 12-0.

Blaschko gave the Titans their first run in the bottom of the third. After a walk to first, Blaschko stole second and advanced to third on an error before finally reaching home on a passed ball.

The Titans followed up by knocking out the Giants in two pop outs and a fly out. Brandt then struck out the side to end the fourth inning scoreless for both teams.

Thomson batted in the Giants’ final two runs in the fifth. Bemmels was on third after a walk and Brandt on second due to an error. With a crack, Thomson hit a double sending Bemmels and Brandt to home.

The Giants finished with 14 runs, 13 hits and 12 RBIs. Bemmels and Brandt led in scoring with three runs each, while Bemmels collected another 3-for — game. Thomson went 4-for-4 with four RBIs.

Blaschko led the Titans in scoring again with one run, while Novak collected two hits.

Hoefs pitched for five innings and struck out one in throwing 76 pitches and 42 strikes.

“We decided, even though having three pitchers in the line-up, to give sophomore Lexi Hoefs her first start in the circle at the varsity level for us on the mound,” said Closser. “She had a few nerves at the beginning but seemed to be able to work through them and find her groove. Although we had some great defensive plays, we still struggled to cut out the errors that would eventually catch up to us. Lexi Factor had a great double play — the team’s first of the season — for us in her first ever Varsity game.”

“Overall, we are still struggling collectively at the plate, and we will keep working on that in practice,” Closser added. “We have a really strong start to our season this year, having Belle Plaine, Le Sueur and then Norwood one after another, always the toughest teams in the Conference. The girls will keep working and will be able to find their groove at the plate and as one unit team.”