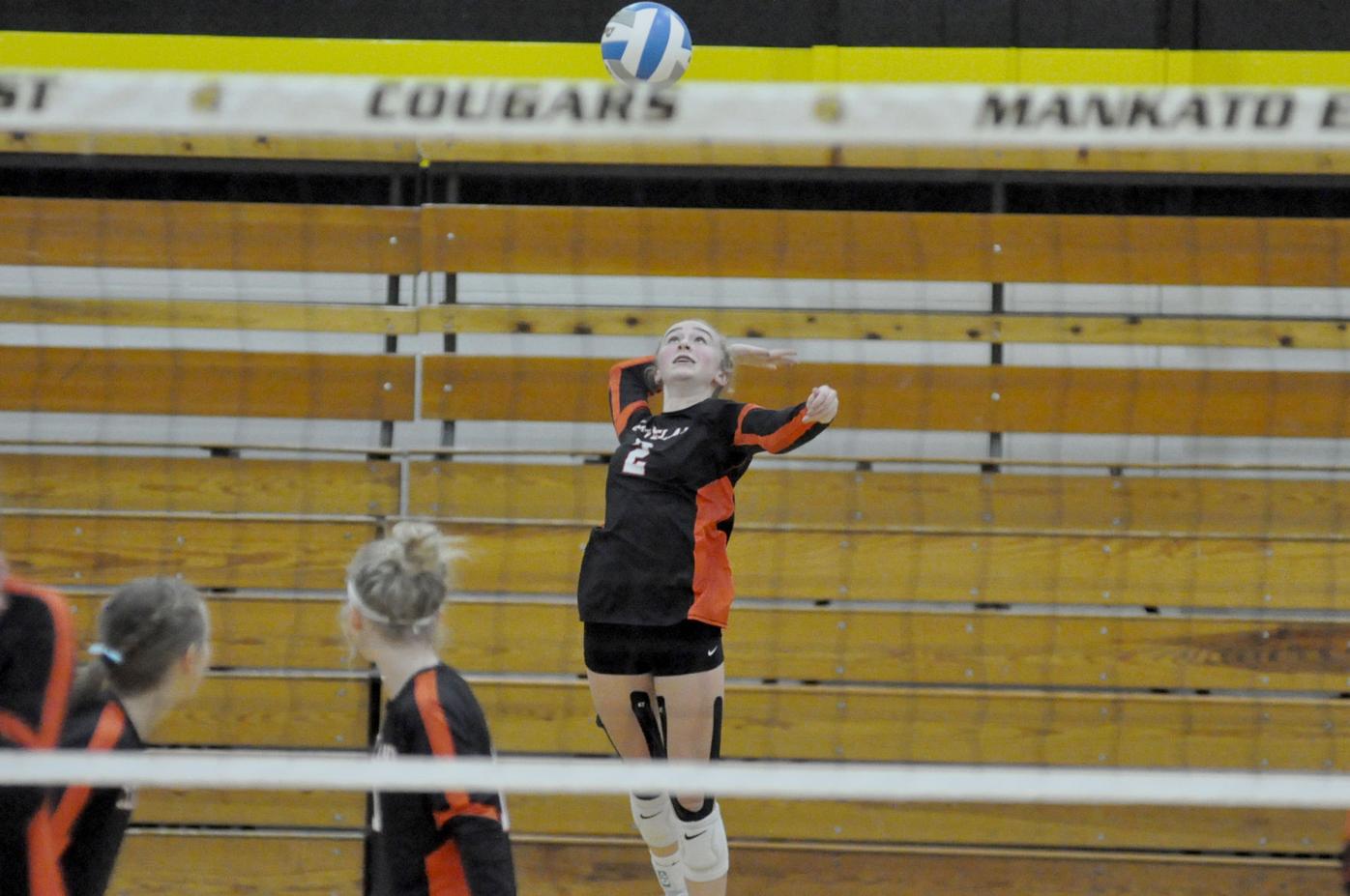 Ava Hahn takes to the air to send a serve to the Cougars. (Ben Camp/Southernminn.com) 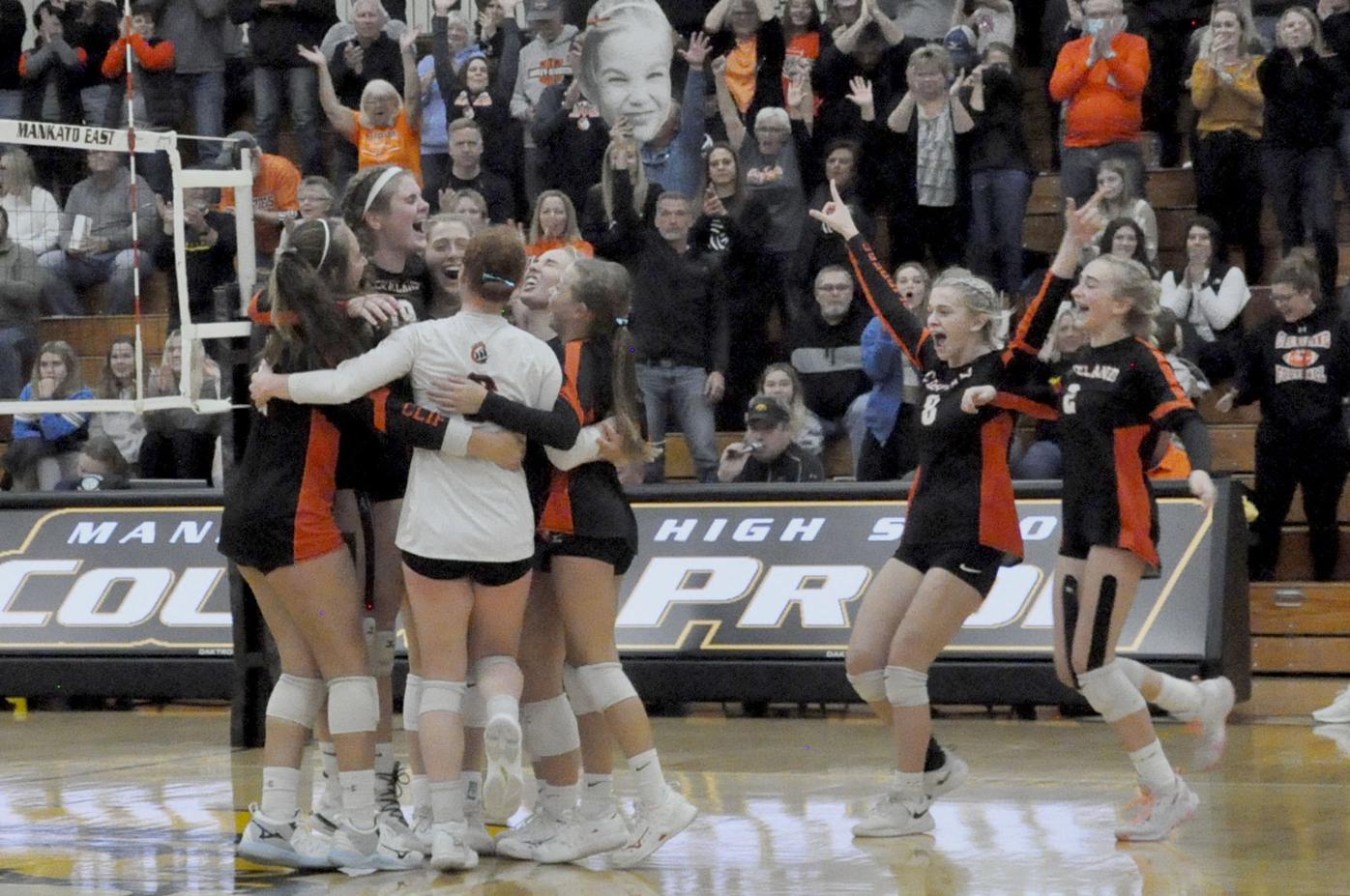 The Clippers celebrate on the floor as they clinch the subsection championship. (Ben Camp/Southernminn.com) 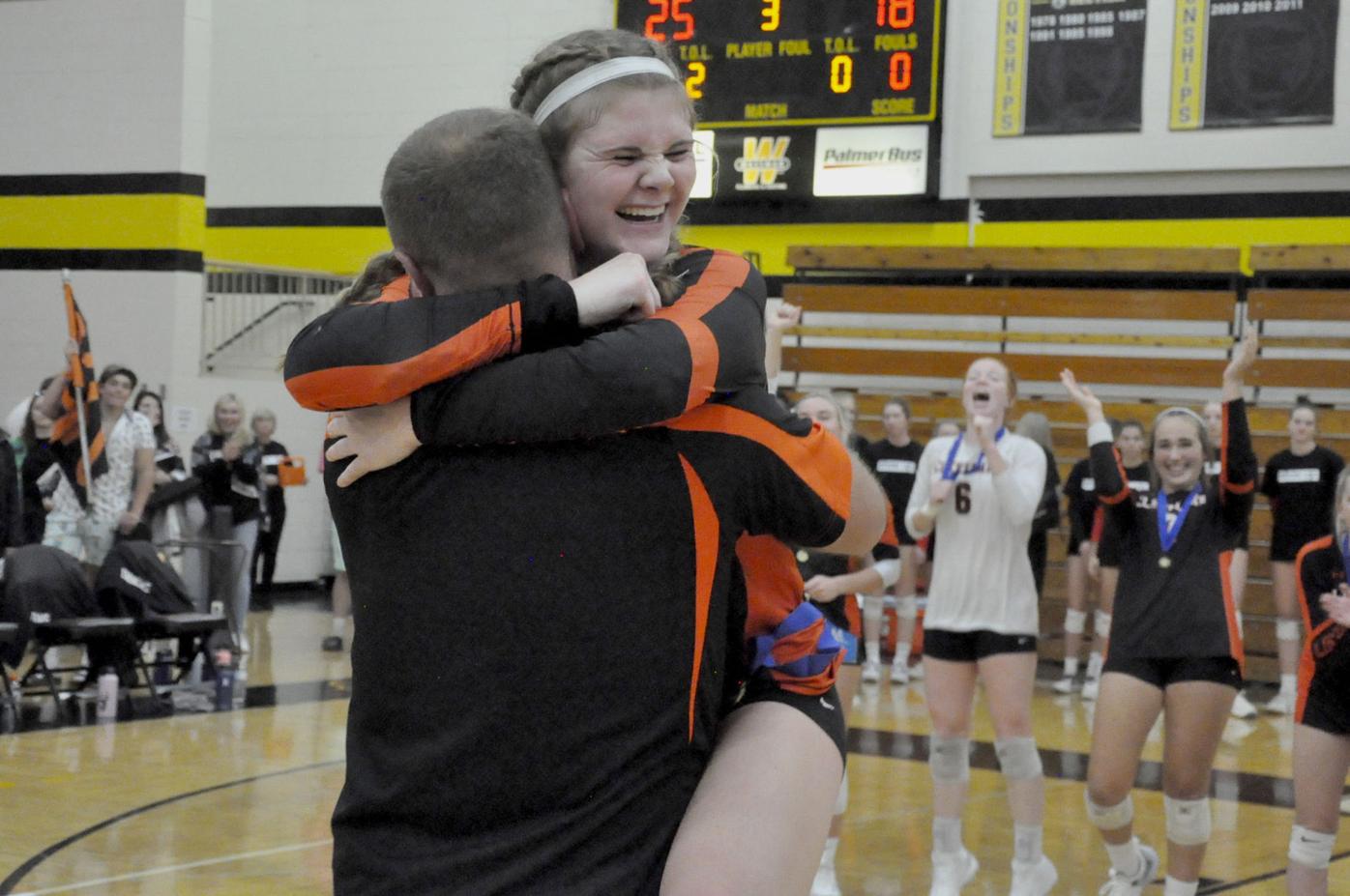 Emily Kern receives her medal as she embraces Rich Kern after the match. (Ben Camp/Southernminn.com) 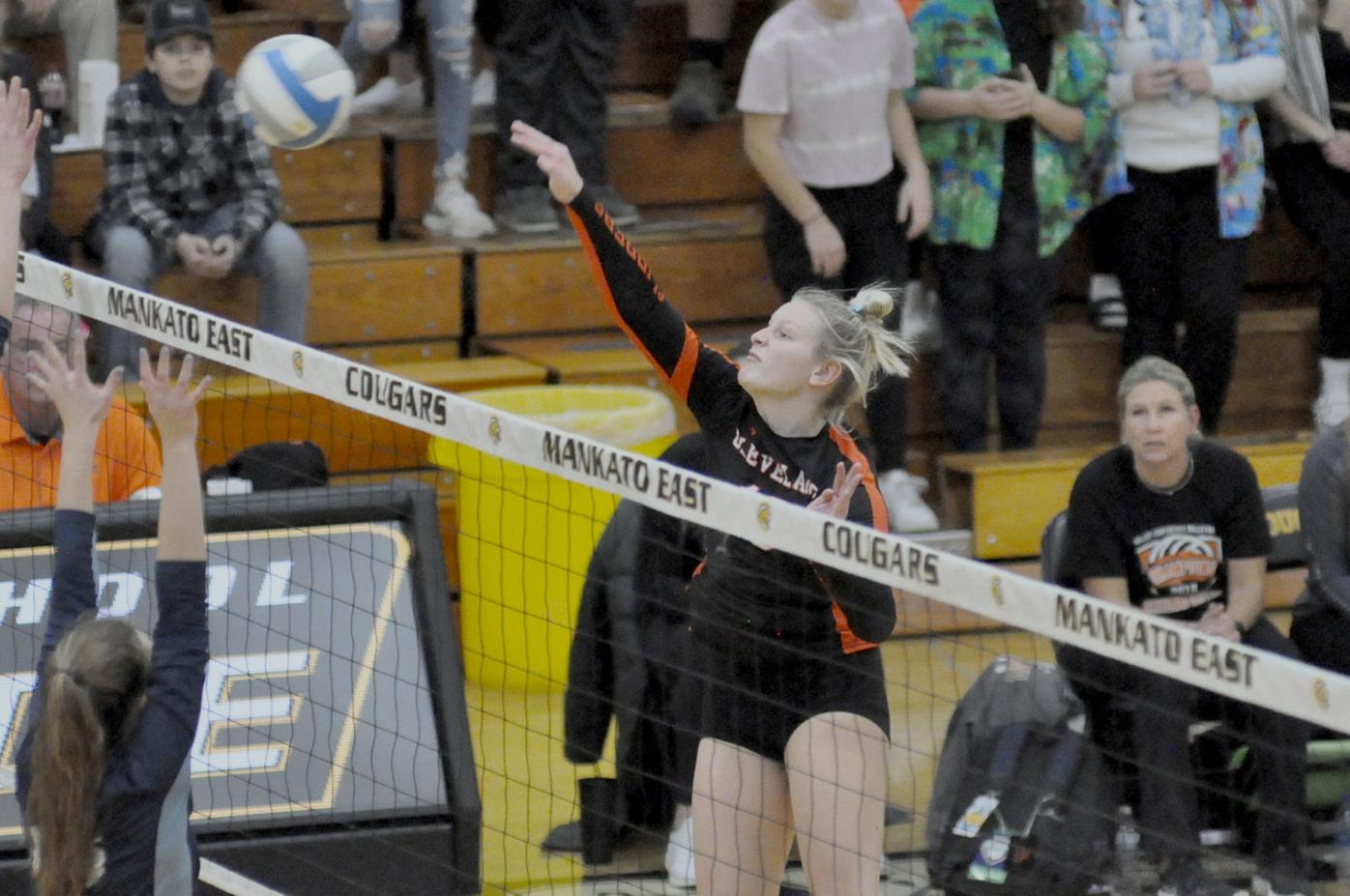 Grayce Kortuem smashes the ball for the final kill in the second set. (Ben Camp/Southernminn.com) 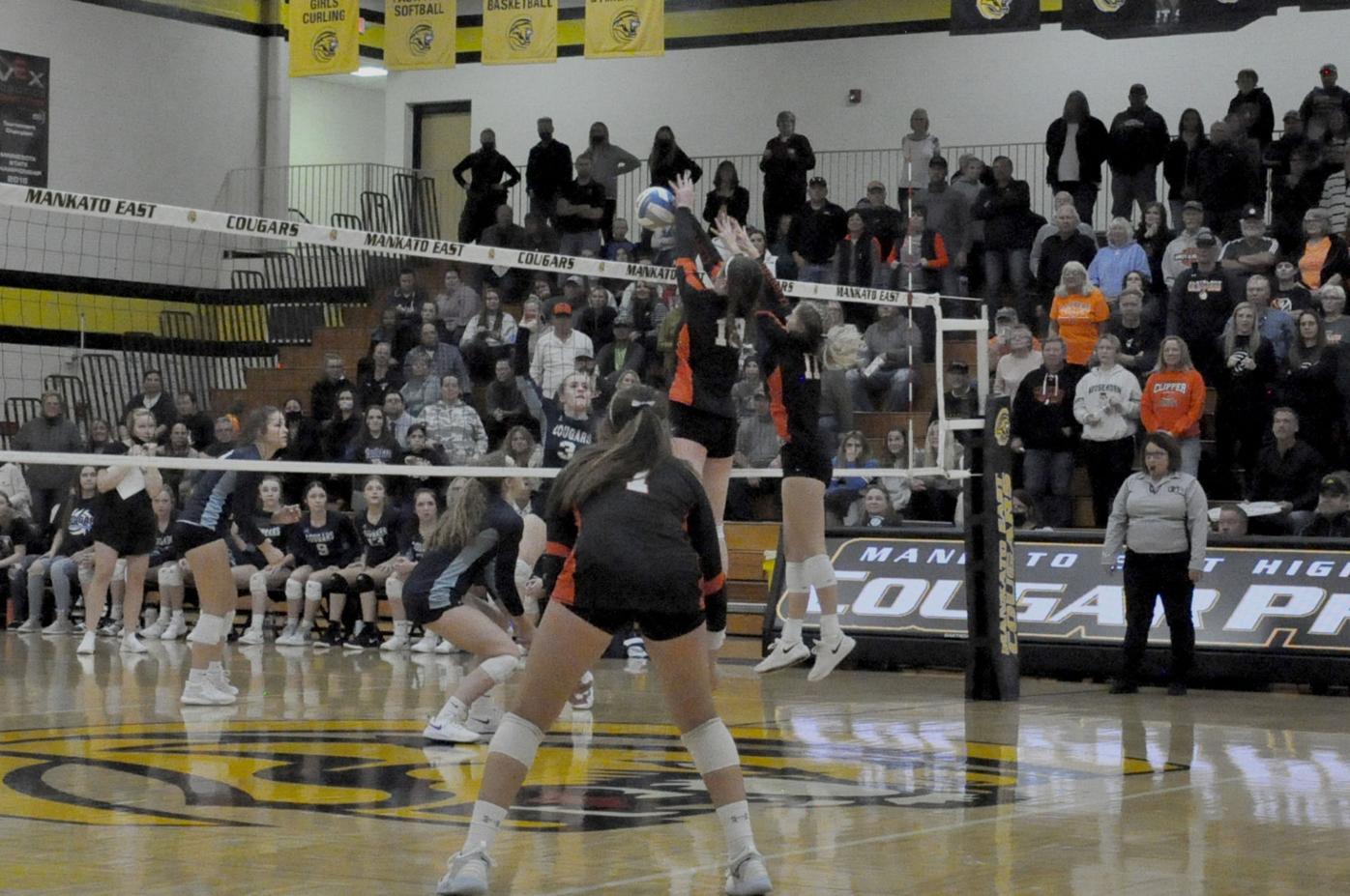 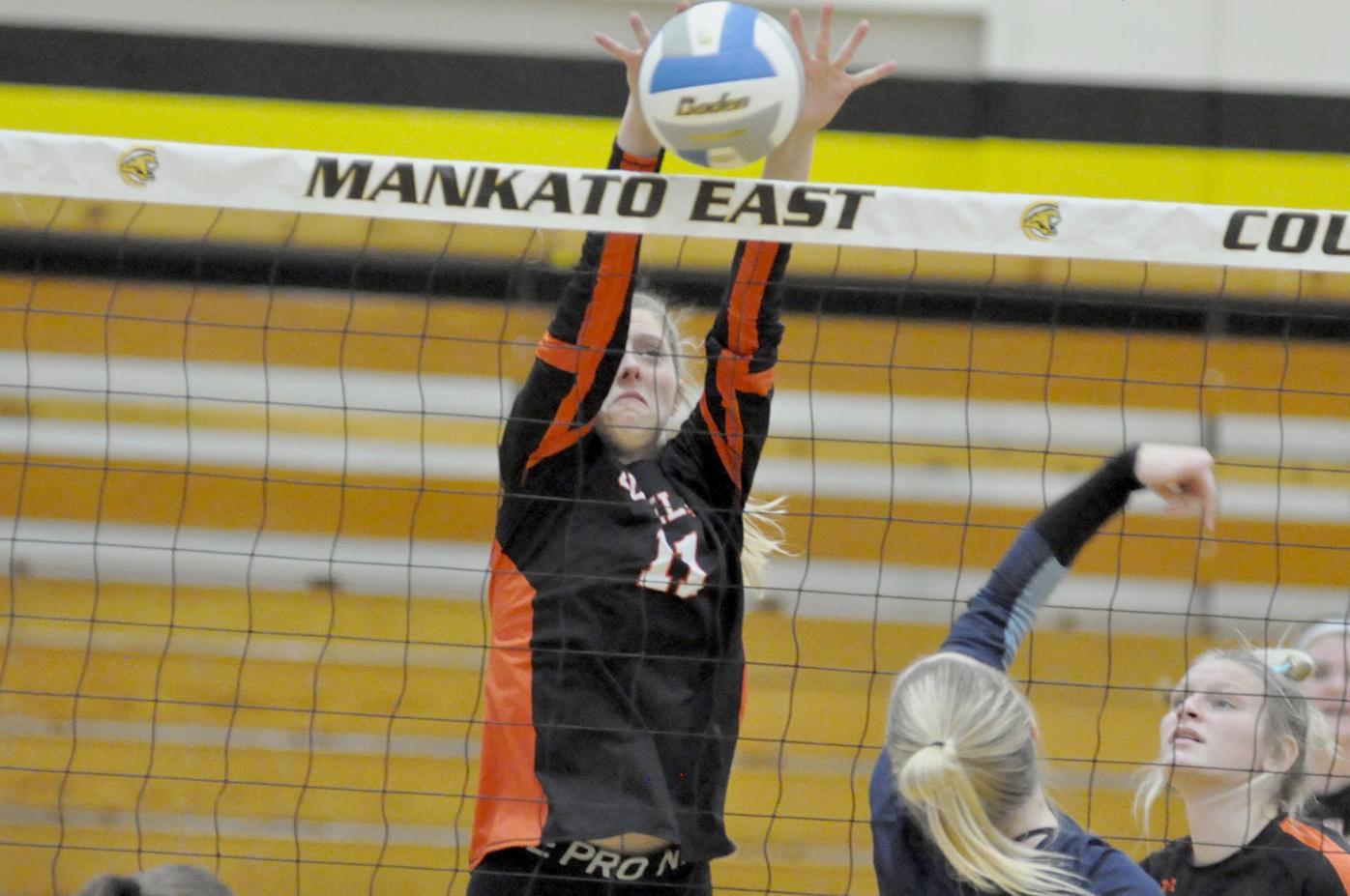 Harley Connor sends away a shot from the Cougars with a block. (Ben Camp/Southernminn.com) 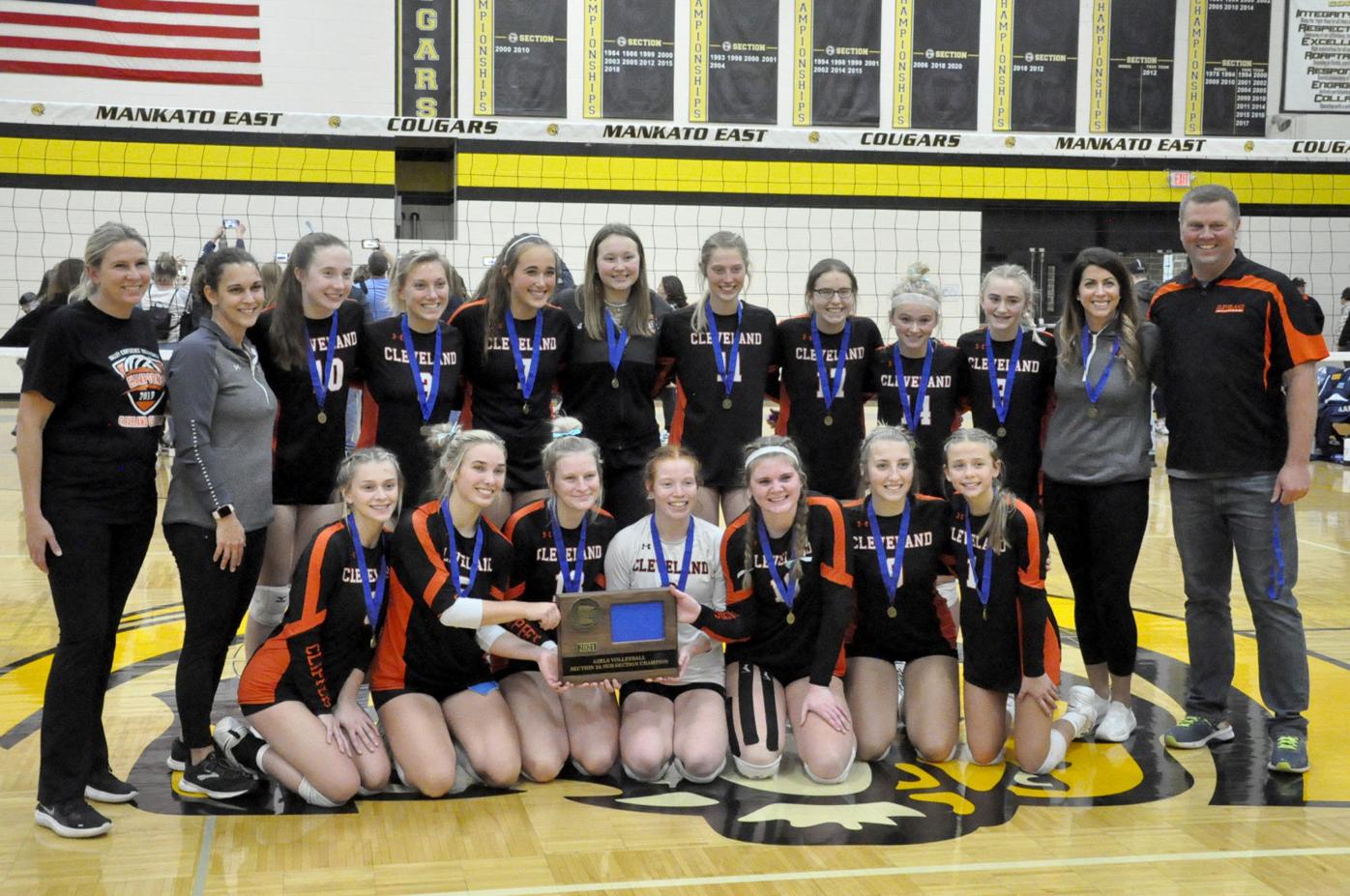 The Cleveland Clippers team poses with the Subsection Championship plaque and their medals. (Ben Camp/Southernminn.com) 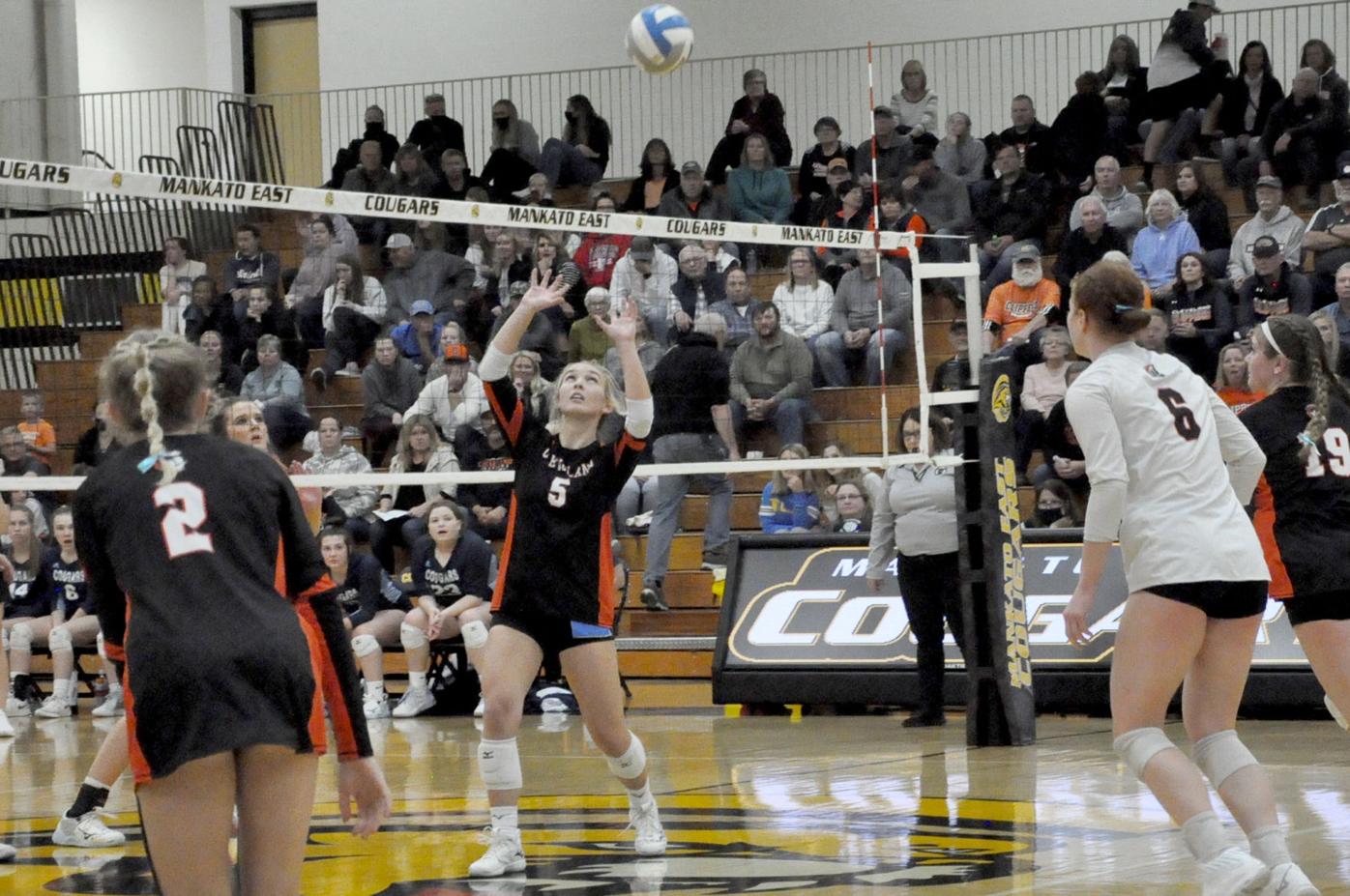 Taylin Gosch prepares to set a ball to one of her outside hitters who approach the net. (Ben Camp/Southernminn.com)

When teams get together to set goals at the start of a season, there is always a balance of hoping for the dream outcome and trying to be realistic. The Cleveland volleyball team came into the season knowing it had the talent to be special, and Thursday night the Clippers continued to prove that they also have the heart it takes to reach new heights.

Cleveland came out on fire and never let up as it swept the second seeded Cedar Mountain Cougars 3-0 (25-14, 25-22, 25-18) to claim the Section 2A South Subsection Championship and one more win away from a state tournament berth.

"We really came out knowing anything can happen and that this team was good," said senior co-captain Emily Kern. "We knew we were going to have to come out with our best shot."

"The girls came out strong. This is the first time we have ever gotten this far so they are super excited," Cleveland head coach Bree Meyer added. "This is what their goal was, to win this match and have a chance to win the section Saturday."

Throughout the match, the Clippers used a balanced attack and frequently put Kern in a position to overwhelm the Cougars as she recorded a match-high 20 kills to go along with five blocks and seven digs.

"That was amazing, it was one of the most fun games I've played all season," said Kern. "Just knowing if we lose that's it, so we were playing all-out for every point."

Aside from the power offense of Cleveland, the team was also dominant from the service line as the best stretch for the Clippers saw libero Emma Sweere serve five straight balls that never made it back over the net.

"Last time we came out too cocky so tonight we made sure to take it easy," said senior setter Taylin Gosch. "We are a great team and if we want to defeat anyone at this level, we have to do it respectfully."

The second set proved to be the most competitive of the night, but with a 24-22 lead, Cleveland's Grayce Kortuem smashed the set winner to give the team a 2-0 lead.

In the final set of the night the Cougars took an early lead that the Clippers kept biting into, but after Cleveland tied things up at 15-15, the Clippers finished the match with a 10-3 run punctuated by a block from Kern to clinch the victory.

"I feel amazing," said Gosch. "It's such an honor to play with this team, we are truly a family."

The victory propels the Cleveland team to the Section 2A Championship match, which will be played Saturday, Nov. 6 at 6 p.m. The opponent will be the winner between Mayer Lutheran and BOLD and the match will be played at St. Peter high school.

In regards to advancing, Kern said, "It feels amazing, we are really excited and we are going to battle and try our best."